The production of Xylanase enzyme by Aspergillus nidulans was studied using solid substrate fermentation. This study is an attempt to optimise different conditions for the production of xylanase by utilising agro-industrial waste products as the sole carbon source for growth of microorganism. Pea, orange, pineapple and mosambi peels were used as substrate for enzyme production and it was observed that on using pea peels the maximum enzyme activity was achieved. Further, various physical and chemical parameters, which support the enzyme production, were optimised by the application of batch experiments at different conditions and by using Design Expert: A statistical tool, applying response surface methodology.

Enzymes are a group of biological molecules that increase the rate of the biological reaction. The Global market for industrially useful enzymes was estimated to be about $4.2 billion in the year 2014 and is expected to develop at a compound annual growth rate (CAGR) of approximately 7% over the period from 2015 to 2020 to reach nearly $6.2 billion (Persistent market research report) [1]. It is observed that mainly within the grain-processing sector the growth is significant [2]. Presently the industries, such as detergent, textile, starch, and fuel alcohol industries account for the bulk of the overall enzymes used in the industrial sector, with the feed and food enzymes along totaling solely regarding thirty-fifth of the total.

Xylanase is the class of enzymes which convert the polysaccharide beta-1,4-xylan into xylose. It breaks hemicellulose, which is the major components of plant cell walls and helps to break in the cell wall, resulting in the release of cell components. Xylan is found in massive quantities in softwoods from the gymnosperms i.e. 7% to 10% and hardwoods from the angiosperms i.e. 15% to 30% of the plasma membrane content and similarly as in annual plants about 30% [3]. It is mainly present in the secondary cell wall of plants, but it is also found in the primary cell wall, mainly in monocots [4]. The ecological niches of those microorganisms which having capability to produce xylanase are numerous and widespread and generally embrace environments wherever stuff accumulate and deteriorate, similarly as within the gut of ruminants [5]. Bacteria, fungi, snails, marine algae, protozoans, yeast, seeds, insect, crustaceans, etc. produce xylanases, (mammals do not produce xylanases). The main source for industrially important xylanases is the filamentous fungi [6]. Solid substrate fermentation (SSF) process is the preferable biochemical process for the production of xylanases using various agro-industrial waste although various methods use submerged fermentation for the enzyme, the process of the SSF is more advantageous because it is easy to isolate the enzyme, low wastewater output and no issues of foaming. Other advantages include low wetness content of the substrates that eliminates the borderline contamination and lowering the operational value of the reactors. Xylanases can be of fungal origin [7] or the bacterial origin [8] and based on the environmental conditions it can be extremophilic xylanases, thermophilic xylanase [9], psychrophilic xylanase or alkaliphilic and acidophilic xylanase.

Xylanase is an industrially important enzyme, which has application in several industrial practices. The major current application of this enzyme is within the pulp and paper industries for economical bio-bleaching [10], it is also required for detergent applications [11], they are found to be helpful animal feeds [12], they would be most fitted to use within the baking business for dough preparation [13]. In occasional extraction and within the preparation of soluble occasional. It is also used in the production of pharmacologically active polysaccharides to be used as, within the protoplasm of plant cells, antimicrobial agents or antioxidants [14].

In this study, we have used different agro-industrial waste products (orange peels, pea peels, pineapple peels, and mosambi peels) for the production of the enzyme. These agro-industrial waste products are very rich in carbon and can be used by the microorganisms for their growth and development. The agro-waste was collected from different locations within Ghaziabad and Hapur districts of Uttar Pradesh, India. With all the substrates, batch experiments were performed by inoculating them with Aspergillus nidulans and the assay of the enzyme was done using DNSA method.

Further, in this study, we made an attempt to optimize the conditions so that we can get maximum activity of the enzyme. For doing so we have used Design Expert: A statistical tool which uses response surface methodology (RSM) to get the optimized conditions out of the various batch experiments, that were done providing different conditions for the growth of the micro-organism.

Source microorganism culture was provided by IMSEC culture bank. This culture was grown on Potato dextrose broth and it was revived after a regular interval of two weeks.

Once the reviewed strain was inoculated in the Petri plates containing PDA (Potato Dextrose Agar) media, culture plates were covered with parafilm and incubated at 28°C in BOD (Bio-Oxygen Demand) incubator. YEPD broth was prepared by using yeast, peptone, dextrose and distilled water. This broth was incubated at 30°C for 4 days for the growth and kept in a refrigerator for the maintenance of culture. Aspergillus nidulans was inoculated in the 500 μl broth for 5 days at 30°C for 5 days to observe growth.

For Screening and selection of agro waste for the enzyme production, various agro-industrial waste products were used and screened for their ability to produce xylanase. After grinding, the substrate was autoclaved and then seeded with the microorganism. After 72 hours of incubation, the growth of fungus was optimum and then the enzyme was extracted and the enzyme assay was performed. Out of the various solid substrates used, it was observed that growth of the microorganism was maximum when pea peels were used, therefore pea peels were selected for the further research work of xylanase production and all the analysis in this paper is with respect to pea peels only. The xylanase assay was performed according to the protocol using DNSA reagent. One unit of enzyme activity is defined as the quantity of enzyme that caused 0.01% reduction of color intensity of xylan solution at 50 1C in 1 minute per ml.

Optimization of various process parameters was carried out based on the growth of the microorganism and how that particular parameter is affecting the activity of the enzyme. Various previous studies were done for the production of the enzyme estimated that the growth of the enzyme is optimal at the temperature of around 30°C to 35°C, experiments were set accordingly keeping in mind the optimal temperature range. Since the presence of the moisture content provides a better environment for the growth of the fungus, this was the most important parameter to be optimized. To meet the nutritional requirements of the microorganisms during the growth phase supplementary carbon and nitrogen sources were provided.

Response surface methodology i.e. RSM is a collection of statistical and mathematical techniques for empirical model building. By careful design of experiments, the objective is to optimize responses which are influenced by several independent input variables. The variables taken here are the temperature, moisture content, carbon source, and nitrogen source. In a series of tests, called runs, changes were made in the input variables in order to identify the reasons for changes in the output response. This was done using a design expert tool which uses RSM. This tool provided sets of experimental runs by using different input variables which were further used for the batch processes to produce enzyme at its optimum.

After the initial results of the individual experiment the effect of all the four factors, we have used Design expert tool to see the combined effects of the factors on the growth of the microorganism. Eight different experiments were performed in batch according to runs provided by RSM tool of Design expert and the further enzyme activity has been noted. The effect of different physical and chemical parameters on the enzyme production was observed. The experimental outcome of the various physical and chemical parameters are described below: 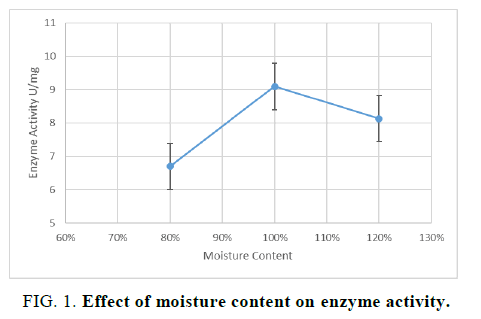 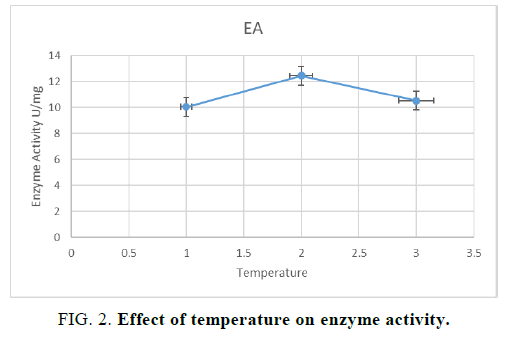 Xylanase research suggests that supplementary carbon source promotes the growth of microorganism when used in the desired concentration. For the optimization of the role of additional carbon content, initially four carbon sources i.e. Xylose, Dextrose, Maltose, and Fructose were used along with the raw agro-industrial waste. Experiments were set up in four different flasks in which the substrates were provided with these additional carbon sources. The result of this experiment showed that on using 1.5% w/v 5 ml dextrose, the growth of micro-organism was optimum (FIG. 3). 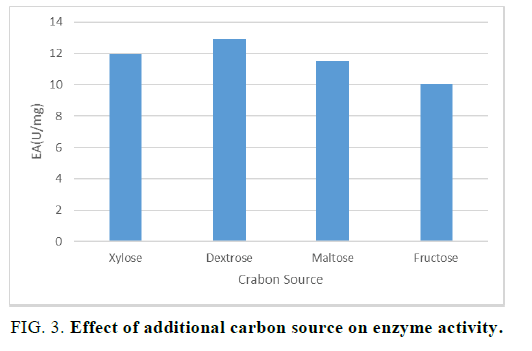 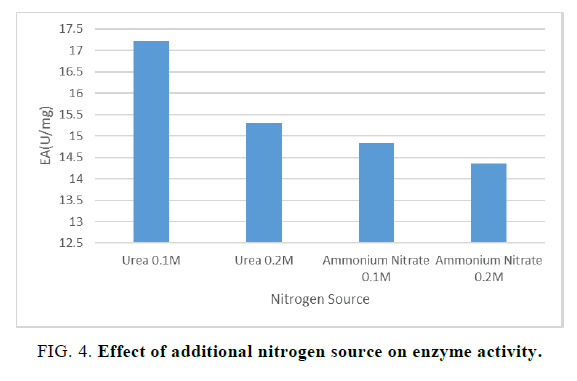 After studying the effect of various parameters individually, there was a need to study how the presence of one variable affects the other variable when both the parameters were used together in the growth media. Design Expert tool is the statistical way to know the effect of one variable on the other variable. The experimental design using Response Surface Methodology was used to estimate the coefficients in a mathematical model, to predict the response and to check the applicability of the model.

Four independent variables were studied at different levels and their minimum and maximum values were listed. The run orders with different combinations of temperature, moisture, nitrogen source, and the carbon source is listed. A similar result was also obtained by Liu and his colleagues [17], where Plackett–Burman design with response surface methodology was proved better for optimization for the production of the enzyme. Coman and Bahrim [18] also mentioned the importance of statistical designs over “one-variable-at-a-time” conventional approach for optimization. The relevance of statistical approach over conventional methods was also mentioned in literature reports [19,20]. Significance of statistical designs for the production of enzymes was also in agreement with the results of Kammoun [21]. For the analysis by using the statistical tool eight different experiments were set according to the runs provided by Design Expert using RSM, these experiments were set and the enzyme assay was performed for each batch. The table below shows the runs and the results of the assays (TABLE 1). 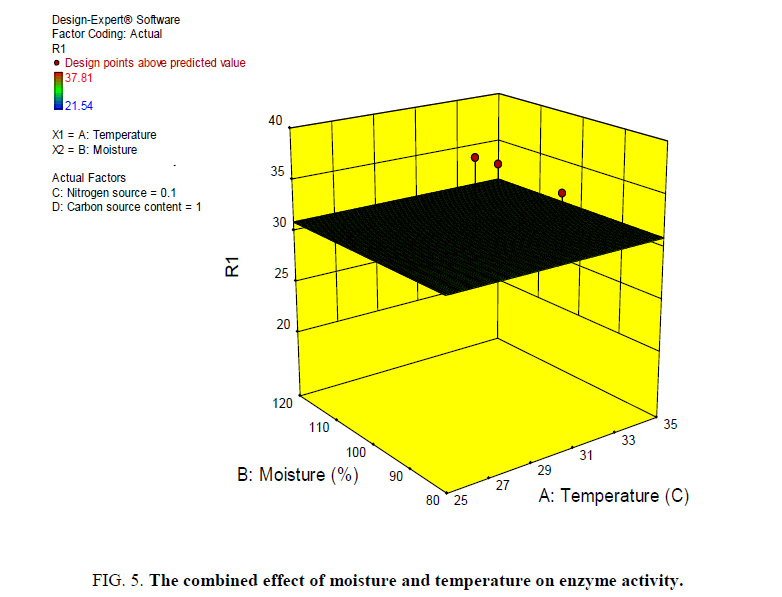 Figure 5: The combined effect of moisture and temperature on enzyme activity. Figure 6: The combined effect of moisture and additional carbon source on enzyme activity. Figure 7: The combined effect of additional nitrogen source and temperature on enzyme activity. Figure 8: The combined effect of additional carbon source and temperature on enzyme activity.

Present research work is an attempt to use the agro-industrial waste for the production of industrially important enzyme xylanase. The experiments for the production of the enzyme using fungus Aspergillus nidulans were conducted utilizing various agro-industrial waste products as a sole carbon source. It was observed that, out of selected sources, pea peel was found to be most suitable and produced maximum enzyme activity. Further different conditions such as temperature at 30°C, moisture at 100%, supplementary carbon source as dextrose and a supplementary nitrogen source as 0.1 M urea, were optimized by performing batch experiments at different conditions. The effect of each parameter on other was studied using RSM statistical method. 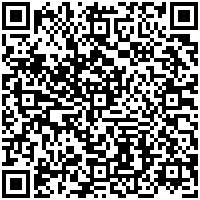