1Biotechnology’s Laboratory of the Bioactive Molecules and the Cellular Physiopathology, Faculty of Biological Sciences, Department of Biology and Living organisms, University of Batna, Algeria

The present study was performed to evaluate the anti-ulcer activity of methanolic extract of Hyoscyamus albus and Umbilicus rupestris against ethanol-induced gastric ulcer. Experimental groups were orally pre-treated with and 100 mg/kg and 200 mg/kg b.w of methanolic extracts HAMeOH and URMeOH. Ulcer control group were pre-treated just with absolute ethanol and reference group was orally pre-treated with omeprazole (20 mg/kg b.w). After one hour of pretreatment, all rats were received the absolute ethanol to generate gastric mucosal injury. And after one hour, our rats were anesthetized and sacrificed and the ulcer areas of the gastric walls were determined. Grossing evaluation has revealed that the negative control rats exhibited severe mucosal injury, whereas, pre-treatment with U. rupestris leaf extract and H. albus has resulted in significantly anti gastric mucosal injury and flattening of the mucosal folds. Histological studies of the gastric wall that the pre-treated with URMeOH and HAMeOH leaf extract was pronounced as gastric protection along followed by reduction or inhibition of leucocytes in the infiltration of the sub-mucosa.

Umbilicus rupestris (Salisb.) Dandy is a perennial plant, belongs to the family of Crassulaceae. It presents on the rocks, the old walls and in mountains; only in North Africa. Leaves of this plant are used in traditional medicine against the ignitions of skin, wounds, and burns, disinfectant, parasiticidal. Infused (leaves) of this plant is used like an ophthalmic disinfectant [1]. H. albus is a plant which belongs for Solanaceae family; it used in traditional medicine as a nervous sedative and para sympatholytic [2]. Natural products are very important in pharmaceutical industry and in search of new potential sources of bioactive molecules [3].

Omeprazole is drug highly selective for the proton pump and catalyzed conversion into active form within the acid forming space [4]. We used in our study; omeprazole was used as the reference anti-ulcer drug. The ulcer can cause by a lot of caused non stroidiens inflammatory, stress or alcohol.

They researchers found that ethanol is the simple method that the method of absolute ethanol is the most simple used to induce gastric ulcer. Ethanol induces the liberation of free radical species and [5].

Therefore, the present study was to evaluate the antiulcerogenic property of the methanolic extract of Hyoscyamus albus and Umbilicus rupestris against ethanol-induced gastric mucosal injury in experimental rats.

Collection of the plant

The leaves of Hyoscyamus albus nd Umbilicus rupestris were harvested in March 2015 from the Wilaya of Batna region Tibhirine Algeria. Botanical species identification was realised by Dr. B. OUDJHIH, Botanical Laboratory, Department of agronomy, University of EL-Hadj Lakhdar – Batna. 40 days in a dry and aerial place for the extraction of active compounds.

The phytochemical screening of HAMeOH and URMeOH was realised by using the method of 8 phytochemical constituents which is: phenolic compounds, terpenoids, saponins, alkaloids, steroids and tannins were analysed qualitatively.

Wistar rats weighted (140 -170 g) provided by the Pasteur Institute – Algiers. These rats were allowed at favorable conditions before and during the experiment: Temperature (23 ± 2)°C, relative humidity 50% to 55% with 12 hours light /12 hours night cycle respectively. The food and water were given ad libitum.

The study of this activity, we have uses the method of Garg et al. [6]. The rats males was divided into six groups of six rats. These rates were deprived 48 hours before the experiment but with accesses of water two hours before the experiment and received by gavage the following treatments: Group I: received distilled water with (5 ml/kg pc) and is useful like a witness, Group II: received distilled water (5 ml/kg b.w.) and served as a control, Groups III and IV: received HAMeOH with the two concentrations (100 and 200 mg/kg b.w.) respectively, Groups V and VI: received URMeOH (100 and 200 mg/kg b.w.) respectively with a volume of (10 ml/kg PC), Group VII: received the omeprazole (20 mg/kg PC) (5 ml/kg b.w.) as standard. 30 min after pretreatment, the ulcer was induced by oral administration of absolute ethanol (5 ml/kg b.w.) except control group. The rats were dessicated 60 min after ethanol administration and each stomach was open along the great curve, and were washed with water physiological [7].

Evaluation of the gastric lesions

Ulcers found in the gastric mucous membrane appearing in the form of bands ellongate of hemorragic lesions parallel to the long axis of the stomach. Surface d’ulcere gastric was calculated according to the method of Kauffman and Grossman, (1978) [8] with some modification. The length (mm) and the width (mm) of the ulcer on the mucous membrane gastric were measured by the method of squaring under a binocular magnifying glass (of x1.8). The surface of each lesion of ulcer was measured by counting the number of small squares, 1 × 1 mm, covering the length and the width of each band of the ulcer. The sum of surfaces of all the lesions for each stomach was applied for calculation surface of ulcer (UA) when the sum of small squares is multiplied with magnification 1.8.

Measure of gastric volume of juice

The gastric volume of juice has the measurement has l’aide d’une syringe.

The inhibition percentage of the ulcers was determined according to the formula below [9,10]:

Where UA controls: Ulcerous surface of the group controls.

1 ml of gastric juice was diluted 10 times with distilled water and subjected a titration has by NaOH has 0.01 NR with adding few drops of phenolphthalein drops until pink color. Total acidity is calculated according to their following formula.

Stomach samples have fixed in phormol 10% for histopathological study with using hematoxyline-eosine. 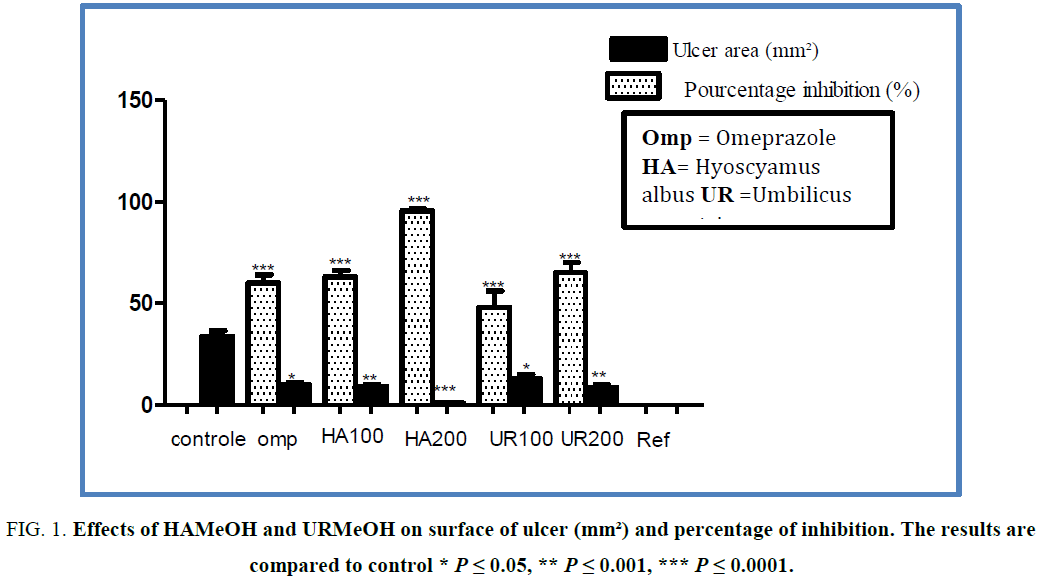 In the group controls, of the serious wounds were observed on the level of the gastric mucous membrane. The ethanol produced one necrosis hemorrhagic visible gastric mucous membrane. It caused disturbances of the epithelium of surface and necrotic lesions which penetrated deeply in the mucous membrane and a papilloma keratosis (Figure 2). However, in animals treated with the extracts, the whole of the signs observed at control group were gone in a significant way especially with the extract HAMeOH 200 mg/kg b.w. (Figure 3 to 8).

Figure 2: Macroscopic aspect and the histological study fixed by hematoxyline -eosine of the gastric mucous membrane in the pretreated rats with distilled water.

Figure 3: Macroscopic aspect and the histological study fixed by hematoxyline -eosine of the gastric mucous membrane in the pretreated rats with the ethanol (control), presence of keratosic papiollome.

Figure 4: Macroscopic aspect and the histological study fixed by hematoxyline -eosine of the gastric mucous membrane in the pretreated rats with omeprazole.

Figure 5: Macroscopic aspect and the histological study fixed by hematoxyline -eosine of the gastric mucous membrane in the pretreated rats with HAMeOH (100 mg/kg b.w.).

Figure 6: Macroscopic aspect and the histological study fixed by hematoxyline -eosine of the gastric mucous membrane in the pretreated rats with HAMeOH (200 mg/kg b.w.).

Figure 7: Macroscopic aspect and the histological study of the gastric mucous membrane in the pretreated rats with URMeOH (200 mg/kg b.w.).

Figure 8: Macroscopic aspect and the histological study fixed by hematoxyline -eosine of the gastric mucous membrane in the pretreated rats with URMeOH (100 mg/kg b.w.).

For total acidity, the omeprazole showed a significant reduction (P ≤ 0.05) compared to control. And this reduction was noticed in a significant way (P ≤ 0.05) also at the group treated with HAMeOH 100 mg/kg and 200 mg/kg. The gastrin is the only hormone able to control the secretion of acid per the increase in the mass of the parietal cells and stimulation of the form of the acid pump H+K+ - ATPase although the parietal cells express the protein H+, K+ ATPase. Thus, it appears that the mode of action of the HAMeOH extract is similar to that of the omeprazole, which bind very specifically to only one sub-unit of H+, K+ -ATPase on the secretary surface of the parietal cell and the inactive one, and it makes it possible to reduce the secretion of acid whatever the source of stimulation of secretion. The omeprazole is effective in the treatment of UGD and the backward flow gastro-oesophagian after its use is with length or short-term [11]. The results are compared to control *P ≤ 0.05, ** P ≤ 0.001, *** P ≤ 0.0001 (Figure 9 and 10).

Gastroduodenal ulcer (UGD) described a state in which is a discontinuity in all the thickness of gastric and the mucous membrane which persists because of the acid and pepsin in the gastric juice [12]. The gastroduodenal ulcers are caused by an imbalance between the defensive mechanisms (defensive mucosal barrier, secretion of bicarbonate, PG) and the aggressive mechanisms (acid, pepsin and Helicobacter pylori of the mucous membrane [12,13]. The ethanol produces necrotic lesions by its direct action on the stomach what reduces the factors of defense like secretion of bicarbonate and the production of mucus [14]. The ethanol can reach the mucous membrane by the rupture of the mucus-bicarbonate barrier and the rupture of the cells in the wall of the blood vessels. These effects are probably due to the some biological phenomena’s like the peroxidation of the membranes, the formation of the free radicals, intracellular effort oxidizing, the change of the permeability and depolarization of the mitochondrial membrane before cellular death [15].

Many drugs including the inhibitors of the pump with protons, the prostaglandin analogues, histamine antagonists and the cyto-protective agents are available for the treatment of the gastro-duodenal ulcer. But the majority of these drugs produces several adverse effects including toxicity and can even deteriorate the biochemical mechanisms of the body especially after the chronic use [16]. Currently, the natural products are generally used to avoid the chronic use of the drugs. Several natural products were announced like having an anti-ulcer genic activity by their effect of defense of mucous membrane [17].

The anti-ulcer effect of the methanolic extracts of H. albus and U. rupestris is with their wealth’s of secondary metabolites such as: flavonoids, saponins and the tannins which were announced known by their anti-ulcerogenic and anti-gastric activity [18]. Many work reported that the flavonoids and the tannins play a significant role in the reduction of the ulcer and the protection of the gastric cells [18]. The flavonoids are antioxidants and powerful trappers of the free radicals which prevent ulceration and the cellular oxidative lesions. In fact major, the compounds are known by their antiulcer effects by inhibition of the lesions of the gastric mucous membrane [19]. It was also reported that the flavonoïds ensures a protection against gastric cancer.