Features of chromatographic separation of pesticides from various chemical classes by the reversed-phase (RP) high-performance liquid chromatography (HPLC) method under isocratic mode of elution are shown. The most complete separation of the test substances is achieved using a lead electrolyte containing acetonitrile and 0.01 M ortho-phosphoric acid in a ratio of 3:2 (v/v), a flow rate of 0.5 mL min-1 , a column thermostat temperature of 40°C, a detection wavelength of 230 nm, and the volume of the injected sample of 10 μL. The separation time is 35 min. Under these conditions, the values of the chromatographic parameters, in particular, peak resolution (Rs), capacitance factor (k'), asymmetry factor (As), and selectivity coefficient (α), have optimal limits.

At the current stage of development of agricultural production, the range of chemical and biological methods of plant protections is constantly changing. In particular, drugs causing remote environmental consequences are excluded, and a list of useful tools is supplemented by effective compounds with new mechanisms of action in safer preparative forms. In recent years, highly toxic and persistent drugs (mercury-containing, chloroorganic, many organophosphorus, etc.) have been excluded from the list of pesticides used in agriculture [1-5].

Pesticides of the 21st century include sulfonylurea preparations and heterocyclic compounds of various series, in particular, pyridine herbicides, pyrimidine insecticides and fungicides, herbicides based on aryloxyphenoxypropionic acid derivatives, imidazolinone herbicides, insecticides of the phenylpyrazole and neonicotinoide classes, triazole and imidazolinone fungicides. The number of works on the synthesis of these compounds is continuously growing, and they successfully compete in efficiency with previously used pesticides [6].

Along with the use of individual pesticides, their various mixtures are often used in agriculture. Combined pesticides allow simultaneously to destroying weeds, pests and diseases, and are an important reserve for increasing the biological and economic efficiency of chemical methods of plant protection. It is known that the use of combinations of small doses of two or more pesticides can provide the same biological efficacy and duration of action as treatment with a large dose of a more toxic preparation. However, the expansion of simultaneous use of pesticides of various classes leads to a noticeable contamination of soil, surface waters, ground waters and drinking water as well as agricultural products [7,8].

The complexity and diversity of the composition of pesticide preparations, the large number of interfering substances make the control over the pollution of waters by pesticides a very complex analytical task. In addition, the composition of pesticides used varies significantly over time [9]. The search for optimal methods for the analysis of pesticides is one of the most important problems in environmental analytical chemistry. For analytical control of residual amounts of pesticides in agricultural and environmental facilities, methods of chromatography-mass spectrometry and gas chromatography, electrochemical methods, polarography, and enzyme immunoassay are widely used. The method of high-performance liquid chromatography (HPLC) has been used most in routine analyzes; however, the use of toxic substances as solvents and expensive reagents necessitates the selection of appropriate eluents for chromatographic separation and detection [10].

The purpose of this work was to develop optimal conditions for simultaneous chromatographic separation of active substances of pesticides of various chemical classes [11]. 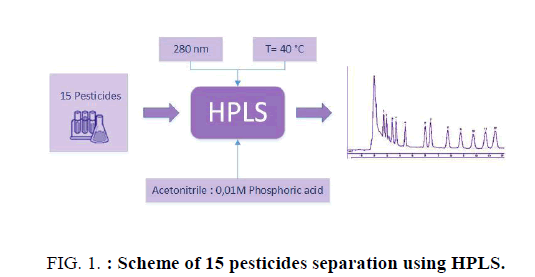 When choosing the conditions for chromatographic separation of the mixture of the active substances of pesticides studied, the physical and chemical properties of the separated compounds were taken into account (Table 1). All substances are thermally unstable, low molecular weight aromatic carbocyclic and heterocyclic compounds containing both electronwithdrawing and electron-donating groups as substituents. To assess the degree of hydrophilicity and hydrophobicity of the compounds, the Schatz hydrophobicity parameter (H) and the octanol water partition coefficient (log P) were used, which were calculated by the formulas:

Table 1: Brief physicochemical characteristic of the active substances of pesticides.

All investigated active substances of pesticides belong to low (H=0-4) and medium hydrophobic (H=4-20) substances, which are respectively partially soluble in water and are readily soluble in polar solvents. Given these characteristics, the most effective is the use of a reversed-phase (RP) version of liquid chromatography. A chromatographic column containing a silica-based sorbent chemically modified with alkylsilanes Cl-Si (CH3)2-R was used as a stationary phase, where R is an alkyl chain with eighteen carbon atoms or an octadecylsilated silica gel. A mixture of acetonitrile with a 0.01 M solution of orthophosphoric acid in various ratios (4:1, 7:3, 3:2, 1:1) was used as a mobile phase. Taking into account that the investigated active substances of pesticides are thermally unstable, the temperature of the column thermostat did not exceed 40°C. According to the methodological instructions for determining the residual quantities of individual pesticides, the detector wavelength of 230 nm was chosen. At the given wavelength, the compounds under study give the maximum response. Chromatographic mobility of the investigated active substances of pesticides was studied and the retention time for different composition of the eluent was determined. The results of chromatography in systems with different reagent contents, as an average of five parallel determinations, are presented in Table 2.

As a result, the complete separation of the test substances was achieved under the following conditions: mobile phase (acetonitrile and 0.01 M ortho-phosphoric acid in a ratio of 3:2 by volume) in isocratic mode; flow rate of 0.5 mL min-1, the temperature of the column thermostat of 40°?, the detection wavelength of 230 nm, the sample volume of 10 μL, the analysis duration of 35 min. Figure. 2 shows a chromatogram of a mixture of standard substances obtained under these conditions. 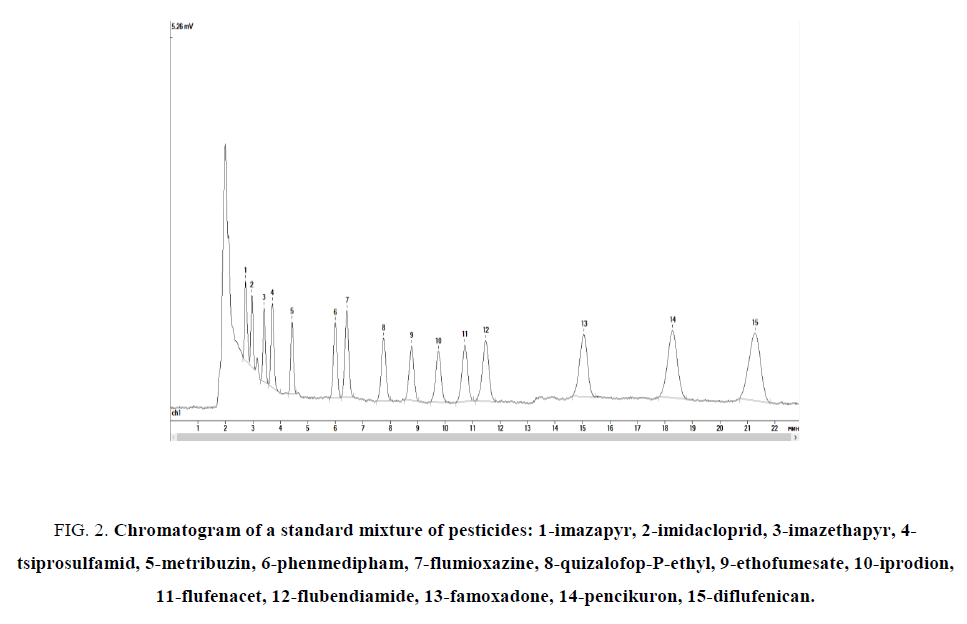 When choosing the optimal conditions for separation and identification of substances in the mixture, the dependence between the composition of the mobile phase and the chromatographic parameters (Rs-peak resolution, α-selectivity coefficient, As-asymmetry factor, k'-capacitance factor, N-number of theoretical plates). The results of calculation of chromatographic characteristics are presented in Table 3.

Table 3: HPTLC profile of the Nakshatra plants for glycosides.

Under these chromatographic conditions, the peak resolution (Rs) values were in the range from 1.48 to 7.34, indicating a fairly complete separation of the two adjacent components. The values of the capacitance factor (k') for the pesticide active substances studied were from 0.37 to 9.64, which characterizes their retention in the column as optimal. If the selectivity coefficient (α) is ≥ 1.1, the separation is considered complete. In our case, α was in the range from 1.1 to 1.6, which indicates the correct choice of the sorbent in the column and solvent in the mobile phase. The values of the asymmetry factor (As) calculated for the peaks of the investigated compounds were in the range from 0.83 to 1.68 that testifies about the absence of significant ion-exchange interactions. The number of theoretical plates (N) under these chromatographic conditions was in the range from 4174 to 11879, which indicates a large number of steady-state equilibria and high efficiency of the chromatographic column. In the selected optimal chromatographic conditions, calibration characteristics were obtained. The graphs for each active substance of pesticides have a linear relationship with the correlation coefficients R2 ≥ 0.9978 (Table 4).

Table 4: Reported reasons for planned cesarean section in Jordanian women according to sector, 2011-2012.

In conclusion, based on the results of present study, the composition of the mobile phase was selected and optimum elution conditions were found for identification of active substances of pesticides of various chemical classes: imazapyr, imidacloprid, imazethapyr, tsiprosulfamid, metribuzin, phenmedipham, flumioxazine, quizalofop-P-ethyl, ethofumesate, iprodion, flufenacet, flubendiamide, famoxadone, pencikuron, diflufenican, The obtained data indicate that this method ensures complete separation and identification of the investigated pesticides that are simultaneously in the mixture. The developed method of separation of a mixture of pesticides from different classes allows us to proceed to an analysis of the pollution of natural objects with pesticides, which is the subject of our next study.

No potential conflict of interest was reported by the authors. 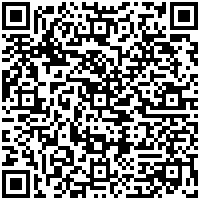