Polysaccharides, widely distributed in plants, animals, and microorganisms, are interesting sources of additives for food and drug industry, due to their unique biological activities and chemical structures [1]. Especially, the biological activities on the antitumor effects have attracted more attention recently in the biochemical and medical fields. Particularly, polysaccharides from the soybean have significant antihyperglycaemic and antihyperlipidemia activities [2]. Soy hulls are a major byproduct in the soybean processing industry and the insoluble carbohydrate fraction contains 50% hemicelluloses, 30% pectin, and 20% cellulose. Therefore, the soy hull is a potential commercial source of polysaccharides [3]. In last few decades, various technologies such as soxhlet, solvent, ultrasound extraction methods were used to extract bioactive polysaccharides from soy bean hull [4]. But, these extraction techniques show disadvantages including lower extraction efficiency, increased operating cost and abnormal extract quality [5] Therefore, there is a critical need to design a favorable technique to extract polysaccharides from soybean hull, effectively.

Nowadays, microwave assisted extraction (MAE) is widely used to extract polysaccharides from various kinds of plant materials due to its enhanced extraction efficiency, when compared to other conventional methods [6]. When microwave assisted extraction is used to extract the polysaccharide, two principal mechanisms are simultaneously functioning. One of these is a rapid increase in temperature, which reduces emulsion viscosity and breaks the outer film of plant material, thus improve the extraction yield. The other one is molecular rotation, which neutralizes the Zeta potential and hence extraction yield is increased [7]. In addition, the process variables in MAE such as weight of the sample, microwave power and extraction times are significantly affecting the process efficiency. The optimization of these parameters will increase the yield of polysaccharide, significantly [8]. Among the various groups of statistical designs, the Plackett–Burman design can be used in preliminary studies for the detection of influential factors on the response value [9]. These factors can be fixed or eliminated in further optimization processes involving second-order models. Response surface methodology (RSM), as an effective statistical tool, can be used to evaluate interactions among various factors, as well as simultaneously estimate the effects of several process variables and their interactions on response variables. RSM has been applied successfully to improve and optimize the bioactive compound extraction process [10]. However, to the best of our knowledge, MAE to perform the extraction of polysaccharide from soy bean using response surface methodology (RSM) via Plackett–Burman factorial designs (PB) has not yet described in literature. Hence, in this study an attempt was made to investigate the efficiency of microwave to extract the polysaccharide from soy bean hull as a function of operating variables such as weight of the sample (g), concentration (%), microwave power (W), agitation speed (rpm), extraction time (min), temperature (°C) and volume of solvent (ml). The Plackett–Burman factorial designs (PB) allows for the screening of main factors from a huge number of process variables, and these designs are thus pretty useful in preliminary studies in which the principal objective is to select variables that can be fixed or eliminated in further optimization processes. In addition, response surface methodology (RSM) coupled with BBD is an efficient strategic experimental tool by which the optimal conditions of a multivariable system may be determined. Therefore, PB and BBD designs were employed to study and optimize the process variables for the maximum polysaccharide yield.

The soy bean hull used were collected from Pollachi, TamilNadu and dried in the room temperature. Sodium hydroxide (NaOH) all other chemicals reagents used were of analytical grade and purchased from local suppliers, Erode.

The soy hulls were first ground using a high-speed rotary cutter and then sieved though 40 mesh. The powder was dewaxed with toluene/ethanol (2:1, v/v) in a Soxhlet for 6 h. The dewaxed sample was dried at 60°C for 24 h and kept in desiccators at room temperature until use. The compositions of the soybean hull were determined using American standard test method (ASTM) and found to be as follows: 34.7% crude fiber, 11.0% protein, 5.2% ash, 1.58% extractives, and 7.1% moisture. Extractions were carried out with various microwave power and extraction time using microwave oven (30SC4 30-L). After extraction, debris fragments of polysaccharides extracts were removed by centrifugation. Then the aqueous solution of polysaccharides was precipitated with four volumes of 95% (V/V) ethanol for 48 h at 4°C. The precipitates were obtained by centrifugation (6000 rpm, 30 min), washed with acetone and then dried get crude polysaccharides. The yield of polysaccharide was calculated [11] as follows:

Where, X is weight of polysaccharide and Z is soy bean hull weight.

The screenings of process variables for extraction were evaluated using Plackett–Burman statistical design. This is a fraction of a two-level factorial design and allows the investigation of ‘n-1’ variables with at least ‘n’ experiments. Four factors were screened in twelve combinations which will provide an adequate estimate of the error and all the trial experiments were performed in duplicate and the average of observation was used as the response of the design.

This design requires that the frequency of each level of a variable should be equal and that in each test, the number of high and low variables should be equal. Then the effect of changing the other variables was cancelled out when determining the effect of particular variable. The main effect was calculated as the difference between the average of measurements made at the high setting (+1) and the average of measurements observed at low setting (−1) of each factor. Plackett–Burman experimental design is based on the first order model and this model describes no interaction among factors. It is mainly used to screen and evaluate the important factors that influence extraction process. The factors that have confidence level above 95% are considered the most significant factors that affect the process. After the screening of process variables, Box-Behnken design (BBD) was used to optimize and examine the influence of effect process variables on yield of polysaccharide. All the statistical analyses were carried out with Stat-Ease Design Expert 8.0.7.1. Experimental runs were established based on a BBD and the complete design consists of 29 experiments were designed and the BBD experimental data was analyzed by multiple regression analysis [12]. Then, the individual and interactive effects of process variables on the extraction process were studied by constructing three dimensional (3D) response surface plots. Finally, optimization of process variables for maximum polysaccharide yield was carried out by derringer’s desired function methodology using numerical optimization technique [13].

Characterization of polysaccharides from by FTIR spectroscopy

FT-IR spectroscopy of crude extract was tested using FTIR Spectrometer. One part of crude sample was mixed with 99% of dried potassium bromide (KBr) powder and compressed to prepare a salt disc of 3 mm diameter. These discs were subjected to FTIR spectrum measurement in the frequency range of 400 cm-1 to 4000 cm-1.

Selection of effective process variables to extract polysaccharide from soy bean hull using microwave is important to improve the extraction efficiency, significantly. In order to screen the major influencing variables such as weight of the sample (A), concentration of NaOH (B), microwave power (C), agitation speed (D), extraction time (E), temperature (F) and volume of solvent (G) on polysaccharide yield, Plackett–Burman (PB) design is used and their process variables are listed in Table 1.

The PB design matrix consists of 12 experimental runs and the corresponding response namely polysaccharide yield (Y1, %) are shown in Table 2. Then the PB design is analyzed by regression analysis and the estimated effects and coefficient of process variables is shown in Table 3.

Table 2. Plackett-Burman design and their results.

Table 3. Estimated effects and coefficient of process variables for Plackett-Burman.

Table 4. BBD and their results.

Where, Y1 is yield of polysaccharide. In order to validate the adequacies of developed mathematical models, experimental values were selected randomly from selected process variable ranges and are plotted with model predicted versus actual plots (Figure 1 and 2). 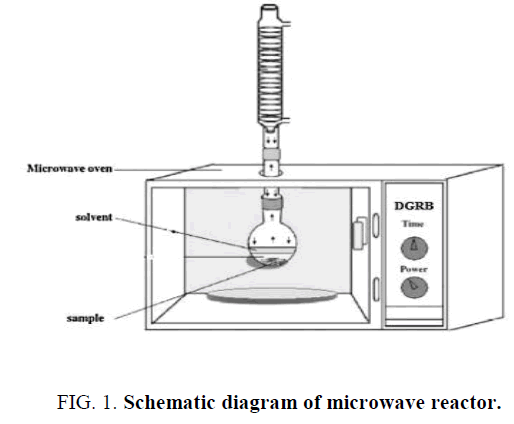 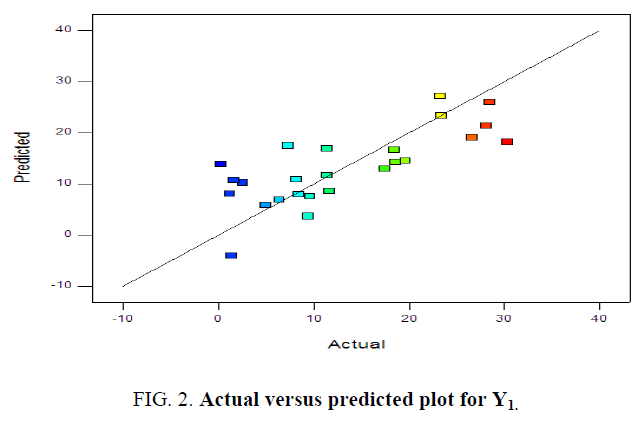 This plot helps us to find out the connection between predicted and experimental values. The data a point on this plot lies very close to the diagonal line indicates the good adequate agreement between experimental data. Moreover, P (<0.0001) and F (>2) values of response indicates the suitability of developed mathematical models. From these results, it is concluded that the developed mathematical model can describe the extraction process, very robustly.

Effects of process variables on the extraction process

After the checking of adequacy of the developed mathematical models, which is used to create the three dimensional (3D) response surface plots (Figure 3a and 3b) in order to study the individual and interactive effect of the process variables on the polysaccharide yield [17]. Microwave power is the crucial factor which influences the polysaccharide yield from soy bean hull, significantly. So that experiments were conducted to study the effect of microwave power (100 W to 300 W) on the polysaccharide yield. From the results, it is observed that, the yield of polysaccharide is increased linearly with increasing microwave power from 100 W to 250 W (Figure 3a). Microwave technique consists of the penetration of microwave energy into the soy bean hull, which produces a volumetrically distributed heat source due to molecular friction. This resulting from dipolar rotation of polar solvents and from the conductive migration of dissolved ions, accelerating the mass transfer of target compounds. Therefore, extraction yield of are polysaccharide enhanced [15,19].

In order to find out the optimum operating conditions to extract polysaccharide from soy bean hulls using microwave, simultaneous optimization of the multiple responses is carried out using numerical optimization technique. Optimum conditions for maximizing the polysaccharide yield was determined using Derringer’s desired function methodology [22] as follows: sample weight of 3 g, microwave power of 300 W, extraction time of 5 min and temperature of 45°C. Under these optimal conditions, predicted polysaccharide yield was found to be 27%.

FTIR analysis is used to find out the functional groups present in the crude extract. The FT-IR spectrum of crude polysaccharide extracted from soy bean hull is shown in Figure 4. This has strong peaks at 3430 cm-1 attributed to the complex stretching vibrations of free and intermolecular bonded hydroxyl groups and carboxylic acid groups which make up the gross structure of carbohydrates. The spectrum of crude extract shows the carboxylate ion peaks at 1600 cm-1. The peak at 1414 cm-1 belongs to O–H bending of water. The carbohydrate peaks at 1140 cm-1 and 1100 cm-1. The peaks at 1060 cm-1 and 990 cm-1 are C–O stretching vibration. These results have been confirmed that presence of polysaccharide group in crude extract. 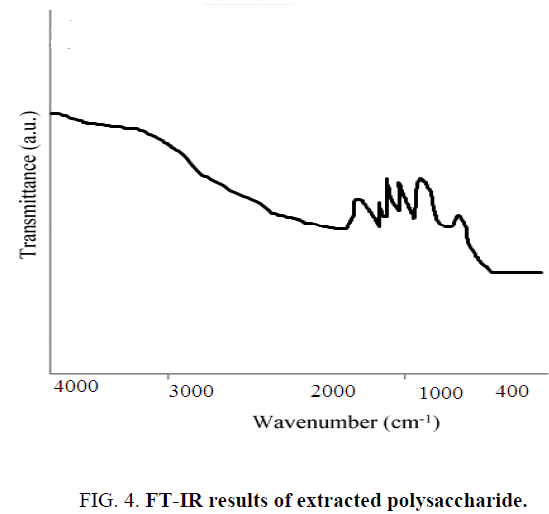 Extraction of polysaccharide from soy bean hulls using microwave was investigated via Plackett–Burman design (PB) and Box-Behnken design (BBD). The various effects of the factors were studied by β-coefficient and Fischer’s F-test for analysis of variance (ANOVA) and a second order model was developed. Optimum conditions for maximizing the polysaccharide yield was determined using Derringer’s desired function methodology as follows: sample weight of 3 g, microwave power of 300 W, extraction time of 5 min and temperature of 45°C. Under these optimal conditions, predicted polysaccharide yield was found to be 27%. The FTIR analysis confirms the functional groups of polysaccharide in crude extract.