UPLC-MS/MS Method for Kinetic Studies and Simultaneous Determination of Amlodipine and Atorvastatin in Bulk, and Their Combined Dosage Form

Ahmed M*, Alshabrawy A and Nageh A

The aim of this work was to develop and validate a simple, sensitive and rapid method for the simultaneous quantitation of amlodipine and atorvastatin in bulk and their combined pharmaceutical formulation and application of method in forced degradation study. The chromatographic separation was achieved on a 50 mm × 2mm, 1.9 μm Hypersil gold column, with gradient elution. The analytes were detected using selective reaction monitoring (SRM) mode on a triple quadrupole mass spectrometer coupled with electrospray ionization (ESI) worked in positive mode and negative mode for Amlodipine (AMO) and Atorvastatin (ASN) respectively. The detection was done by monitoring of 409.47 → 238.22 (m/z), 557.65 → 397.27 (m/z), and 256.15 → 167.07 (m/z) for amlodipine, atorvastatin and diphenhydramine (IS) respectively. The method was validated over concentration range of (3-50) ng/mL and (0.8-50) ng/mL for Amlodipine (AMO) and Atorvastatin (ASN) respectively, for its linearity, robusticity, intra- and inters- day reproducibility. The lower limits of detection (LOD) were found to be 0.23 ng/mL and 0.56 ng/mL and lower limits of quantitation (LOQ) were found to be 0.69 ng/mL and 1.7 ng/mL for amlodipine and atorvastatin respectively. The method was applied successfully to quantitate atorvastatin and amlodipine in laboratory bulk mixture and their combined pharmaceutical dosage form. Also this method was used in stressed degradation study for identification of degradation products and calculation of kinetic parameters.

Hypertensive patients have high incidence of having atherosclerosis. Calcium Channel Blockers (CCBs) have been successfully used as antihypertensive over the last decades. On the other hand, Statins have demonstrated a potent effect in lowering blood level of lipids [1]. Combination of CCBs and Statins may have an additive or synergistic effect on prevention of coronary atherosclerosis [2]. Amlodipine (AMO) (IUPAC name: 3-Ethyl 5-methyl 2-[(2-aminoethoxy)methyl]-4-(2- chlorophenyl)-6-methyl-,4-dihydro-,5-pyridinedicarboxylate and CAS:88150-42-9) (Figure 1) is a calcium channel blocker used in treatment of chronic stable angina and in management of mild-to-moderate essential hypertension [3]. AMO inhibits the entry of calcium into vascular and cardiac muscles [4]. Atorvastatin (ASN) (IUPAC name: (3R,5R)-7-[2-(4-fluorophenyl)-3-phenyl-4-(phenylcarbamoyl)-5-propan-2-ylpyrrol-1-yl]-,5-dihydroxyheptanoic acid and CAS: 134523-00), (Figure 1) is a second generation of 3-hydroxy-3-methyl-glutaryl-coenzyme A (HMG-CoA) reductase inhibitor. It prevents the synthesis of cholesterol through the inhibition of HMG-CoA reductase, this will prevent cholesterol production. Marked reduction in total cholesterol, low-density lipoprotein cholesterol and plasma triglycerides have been seen for long term oral administration of ASN [5]. Several analytical techniques were described for the determination of AMO in bulk powder, pharmaceutical formulations and body fluids. These techniques include high-performance liquid chromatography (HPLC) with UV detection [6,7], HPLC with fluorescence detection [8], liquid chromatography coupled to single quadropole mass spectrometry (LC/MS) [9], liquid chromatography-tandem mass spectrometry (LC-MS/MS) [10,11] voltammetry [12-14] spectrofluorometry [15,16], capillary electrophoresis [16] and visible spectrophotometry [17-20]. On the other hand, analysis of atorvastatin in bulk, pharmaceutical formulations and body fluids were reported. These methods include HPLC-UV [21,22], LC/MS [23], high-performance thin-layer chromatography (HPTLC) with densitometric detection [24], potentiometry [25] and spectrophotometry [26]. Various methods have been reported for the simultaneous estimation of AMO and ASN in their combined dosage form and plasma. These methods involve HPLC [27-29], (LC-MS/MS) [30,31] spectrophotometry [32], voltammetry [33]. Amlodipine and atorvastatin were introduced in pharmaceutical dosage form to treat patients with combined hypertension and hyperlipidaemia. The combination increases the needs to develop a sensitive, accurate and simple method for simultaneous determination of each drug in pharmaceutical dosage form mixture. Another aim of the proposed work was to study the stability of AMO and ASN under stress forced degradation. To our knowledge there are no reported methods for either simultaneous determination of Amlodipine and Atorvastatin in their pharmaceutical combination, stress forced degradation nor by UPLC-MS/MS spectrometry. 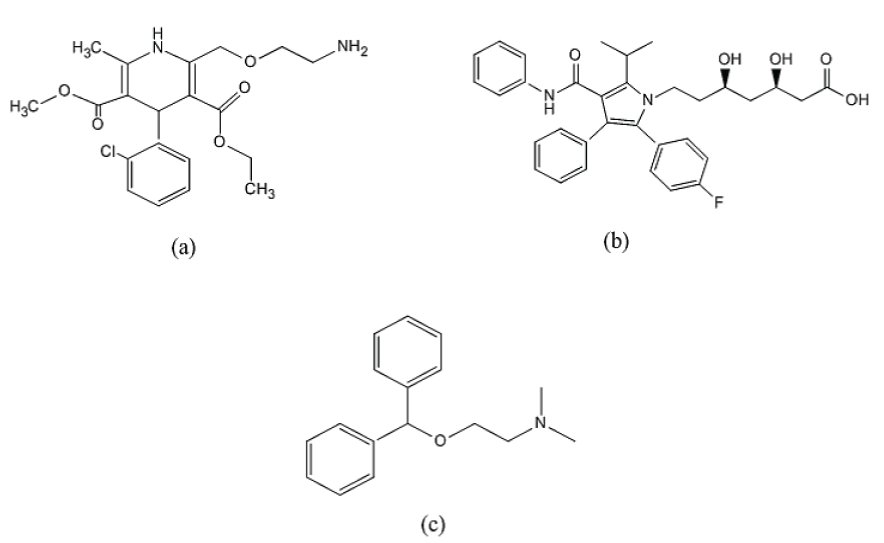 Figure 1. Chemical structures of amlodipine (a), atorvastatin (b) and diphenhydramine (internal standard) (c).

Amlodipine besylate and atorvastatin calcium were kindly granted from Egyptian International Pharmaceutical Industry Co. (EIPICO) (10th of Ramadan City, Sharqia, Egypt). The purities of the two drugs under study were determined using reference methods and were found to be 99.54% for amlodipine besylate [27] and 100.03% for atorvastatin calcium [21]. Diphenhydramine (IS), HPLC grade solvents (methanol and acetonitrile) and formic acid were purchased from Sigma-Aldrich, Steinheim, Germany. Pure deionized water was obtained from (ELGA, Purelab flex) water purification system. The combination of AMO and ASN formulation is Caduet 10/10 tablets were obtained from Pfizer, Egypt.

The mass spectrometric conditions were optimized for each compound by continuous infusion of the standard solutions (1 μg/mL in mobile phase of each) at 10 μL/min using a Harvard infusion pump. The tandem mass spectrometer was operated in the selective reaction monitoring (SRM) mode. The vaporizer temperature was kept at 400°C and the ion-spray voltage was set at 3600 V for AMO and IS and -3000 V for ASN. The sheath gas pressure was 15 psi and the auxiliary gas was 5 psi. The Collision energies were, 31 and 14 for AMO, ASN and IS respectively.

Ten tablets contain both analytes was crushed, powdered and homogenized. An accurate amount equivalent to 10 mg of both drugs was extracted with methanol filtered. Different aliquots were taken to obtain concentration range of (0.8-50) ng/ml and (3-50) ng/ml of AMO and ASN respectively. These dilutions were assayed following the procedure in construction of calibration curves.

Determination of forced degradation (acidic, alkaline and oxidative) of AMO and ASN was done by using 0.1N HCl, 0.1N NaOH and 3% H2O2. For each drug 0.01 mg was dissolved in 10 ml methanol, transferred to 25 ml Volumetric flask and dilute with 0.1N HCl, 0.1N NaOH and 3% H2O2 in each case. These solutions were kept at 70°C for all except H2O2 was kept at room temperature for time intervals (0, 10, 20, 30, 40, 50, 60) min. After the specified time samples in acid and base were neutralized by adding an appropriate volume and normality of NaOH and HCl, while un reacted H2O2 was removed by sonication. The neutralized solutions were diluted with the mobile phase to obtain 25 ng/ml of each drug. The concentrations of remaining AMO and ASN at different time intervals were determined by the proposed method.

The optimized SRM transitions (precursor ion m/z → product ion m/z) are: m/z 557.65 → 397.19 for ASN, 409.47 → 238.22 for AMO and 256.15 → 167.11 for IS. Under these LC-/MS/MS conditions, the retention times of AMO, ASN and IS were 2.1, 2.52 and 2.23 min, respectively. Representative LC-MS/MS chromatograms are shown in Figure 2. Optimizing the sprayer voltage is done to ensure ionization of analytes. High spray voltages may liable to discharges. Reducing spray voltages reduce interference from unwanted side reactions that may be decrease signal intensity. For obtaining good chromatographic separation and peak characteristics for the subsequent quantitative work, the selection of the mobile phase was an important factor. Chromatographic separation of the analytes was achieved with adequate retention times and peak shape using gradient elution with 0.1% formic acid in water and acetonitrile on a Hypersil gold (50 mm × 2 mm, 1.9 μm) column. Different flow rates were test and the optimum flow rate was 0.25 ml/min. with these chromatographic conditions, the peak shape was satisfactory for quantitative work even at very low concentrations (Figure 3). The validation of our method was done by following the guidelines of ICH Q2 (R1) recommendation [34].

The linearity of the method was determined by analysing calibration standard samples at concentrations range of (0.8-50) ng/ml and (3-50) ng/ml for AMO and ASN respectively. The calibration curve was constructed by linear regression of the peak area ratios of each analyte to IS obtained against the corresponding concentrations using a weighting factor of 1/concentration2. Linear relationship between concentration and peak area ratio for both drugs was found. The linear regression equations are listed in (Table 1).

Table 1. Linearity data for amlodipine and atorvastatin by the proposed LC-MS/MS method*.

Limit of quantitation (LOQ) and limit of detection (LOD)

Statistical comparison of the performance of the proposed method with that of the reported method showed that there was no significant difference in their accuracy and precision as shown by the results of student’s t‐test and variance ratio F-test respectively (Table 2).

Table 2. Data of accuracy and precision obtained by the proposed method and the reported ones for the analysis of amlodipine and atorvastatin in pure form.

System suitability used to confirm the suitability of chromatographic system for analysis with high agrees of accuracy and precision. Following the USP guidelines [36] and with concordance with the parameters value [37]. The suitability of method was achieved by adopting the quantitation of analytes with external method, linearity between the concentrations of analytes in the range of (3-50) ng/mL and (0.8-50) ng/mL for AMO and ASN respectively. The peak area of analyte was obtained. The concentration of AMO and ASN were obtained from the following equation:

Where C is the concentration of each drug in ng/ml and Y is the area ratio between drug and IS. Testing of system suitability of the proposed method indicates passing the test as showed in Table 3.

Table 3. Results of system suitability of the proposed method.

Robustness of the method

The robustness of an analytical method measures the capacity of it to restrain minute but deliberate changes in method parameters [38]. Evaluation of the robustness of the proposed method was done for the chromatographic as well as, the mass parameters, e.g., flow rate of mobile phase (± 10 μL/min), vaporizer temperature or transfer capillary temperature (± 5°C), collision energy (± 2 V) and sheath gas pressure (± 5 psi) did not show significant changes in the values of peak areas.

Application of the proposed method

The proposed method was applied to analysis laboratory mixture of AMO and ASN in different proportions. Satisfactory results were obtained and listed in Table 3. Caduet 10/10 Tablets were analysed using our proposed LC-MS/MS method to demonstrate its efficiency in the analysis of AMO and ASN in pharmaceutical dosage form for quality control testing. The concentration of each drug was calculated using the corresponding regression equation that was obtained from the proposed method. SRM mode for the detection produce high degree of selectivity as it measured only specified the product ion from specified parent ion. To validate the application on pharmaceutical dosage form standard addition technique was applied [39]. The results were listed in Tables 4 and 5.

Table 4. Determination of amlodipine and atorvastatin in laboratory prepared mixtures by the proposed method.

The degradation of pharmaceutical products during storage occurred by different rates. These reactions were affected by different conditions such as temperature, pH of solution, light, oxidation. The orders of these degradations depend on relations between changes in concentration by time. The degradation of most pharmaceuticals follow zero order, first order or pseudo first-order [40]. Because of AMO and ASN were place with a large volume of regents, the degradation of both drugs were showed pseudo-first-order kinetics [41]. Pseudo-first-order is obtained in case of presence of two reactants in different ratio so that any change in concentration of major reactant (acid or base, peroxide) will be negligible in comparison to change in concentration of minor reactant (drug). Plotting of log % remaining concentration against time, to evaluate the kinetic degradation parameters of each drug in acidic, alkaline and oxidative conditions were done. Rate constant (K), time left for 50% potency (t1/2) and time left for 90% potency (t90) for each forced condition were obtained from the following equations [42].

The results of degradation kinetic parameters were shown in Table 6.

The degradation products of AMO and ASN in acid, base and peroxides are identified by LC-MS. For AMO the Q1 scan of these products identified as major products and have m/z as 407.32, 208.13 and 163.19. In summary we developed and validated a new UPLC-MS/MS method for simultaneous determination of amlodipine and atorvastatin in bulk and pharmaceutical dosage form. The method is simple, rapid, selective and sensitive. The validity of method supports its suitability for the routine analysis and quality control testing of amlodipine and atorvastatin in pharmaceutical dosage forms. The stability of both drugs in acidic, alkaline and oxidative medium revealed that both AMO and ASN are rapidly degraded in the tested mediums. The degradations of both follow pseudo – first order kinetics. The t1/2 values of AMO and ASN in the tested medium are decreases in the following order acidic, oxidative and alkaline and alkaline, acid and oxidative mediums for AMO and ASN respectively. Identification of some of the degradation products of AMO and ASN was done by LC-MS.

The first and second authors contributed equally for this work 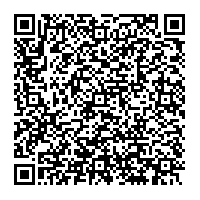