This research paper is mainly focused on the sustainable biodiesel production from a newly isolated micro-algal strain Chlorococcum sphacosum using a novel lipase immobilised functionalised nano-biocatalyst. In this reaction, the lipase was produced from Aspergillus niger (KP001169) a fungal strain isolated from oil contaminated soil sample collected nearby to the oil industry. The lipase was immobilized with magnetic nanoparticle using co-precipitation method and used as a nano-biocatalyst for the production of biodiesel production. The synthesized nano-biocatalyst enhanced the percentage yield of biodiesel. Using the lipase immobilised magnetic nanoparticles as a biocatalyst achieved maximum percentage yield 88% respectively. The catalyst can be reused more than five times in the biodiesel reaction without any treatment and activity changes and then after sixth cycle there is a loss in the activity of the synthesized nano-biocatalyst. Finally, the Fatty acid methyl esters (FAMEs) composition was characterized using GC-MS analytical technique.

Due to the rapid increase in the world population, need for fossil fuels are to be increased. Because of its several disadvantages, the production of fossil fuels was limited. Recently the researchers and scientists had started giving more attention towards developing a new alternative source for fuels. Now-a-days much attention has been paid towards biodiesel production from different raw materials, such as vegetable oil, sunflower oil, palm oil, rapeseed oil, and waste cooking oil, etc., [1-3]. The cost of biodiesel is mainly based on the raw materials and the other process involved in biofuel production. The present situation in the cost of biofuels is two-fold that of commercial diesel, due to the 60%-70% of the total amount was spent to buy the raw materials. Hence, to find out the alternative oil sources for biodiesel synthesis is the third-generation feedstock i.e., the oleaginous microalgae [4]. Biodiesel has several merits compared to the diesel; it has easy way transportability, high combustion efficiency, low sulphur and aromatic content, high cetane number and biodegradability, less GHG emission, etc., The demerits of biodiesel are high viscosity, lower energy content, high cloud and pour point, high nitrogen oxide emission, lower engine speed and power, injector cooking, high price and engine erosion, etc., [5]. Simultaneously, the major factors affecting transesterification process is the molar ratio of alcohol, catalyst, temperature, time and agitation speed, etc., Currently the production of biodiesel was carried out in the presence of corrosive chemical catalysts (strong acids or bases) and led to less product yield [6]. Recently, lipase immobilized nanoparticles play an important role in the transesterification process. The main demerits of chemical process such as high energy input, elimination of salt, difficulty in recycling glycerol, soap formation, etc., [7,8]. To overcome these issues, enzymatic transesterification is used as an alternative process for the biodiesel production. In this process, the by-product glycerol can be easily recovered, salt and catalyst can be avoided during this reaction. Enzymatic transesterification process produces high yield under milder conditions compared to the other reaction method [9]. Lipase-catalyzed transesterification takes place in two steps, which involves hydrolysis of the ester bond and esterification with the second substrate. Lipase enzyme is an alternative catalyst for biodiesel production and eco-friendly [10-12]. The immobilized lipases are stable at temperature and also used as reusable catalyst. The reusability of lipases solves the high cost of the enzymes and makes them as a suitable catalyst for biodiesel production in industrial scale.

All the media components were purchased from Hi-media. Chemicals and reagents, including olive oil used, were purchased from Sigma-Aldrich (India), were of analytical grade, and were used without further purification. Aspergillus niger (KP001169) was isolated from oil contaminated soil and used for further studies.

The enzymatic transesterification reaction was carried out in a round bottom flask containing the reaction mixture of micro- algal oil and 300 mg of lipase immobilized MNPs. The molar ratio of methanol and algal oil was optimized from the range of 1:1, 1:2, 1:3, 1:4, 1:5 and 1:6. The reaction mixture was placed in a magnetic stirrer maintaining at a temperature of 45°C and 400 rpm respectively for about 6 h. The biodiesel conversion efficiency was calculated and expressed by using empirical formula stated as; weight of FAMEs divided by weight of oil content.

The enzymatic transesterification was carried out by adding the lipase immobilized magnetic nanoparticles at different concentrations of 100, 200, 300, 400 and 500 mg. The reaction takes place at constant molar ratio 1:4(oil/methanol) by varying the concentrations of nano-biocatalyst at 400 rpm respectively for about 6 h.

The reaction mixture consists of 300 mg lipase immobilized magnetic nanoparticles, constant molar ratio 1:4 (oil/methanol) by varying the reaction rpm from 100, 200, 300, 400 and 500 respectively for about 6 h.

Production of biodiesel by optimized factors using the transesterification process

The reusability of the prepared enzyme catalyst was estimated by using the catalyst repeatedly to perform transesterification process at the same reaction condition to estimate the percentage yield of biodiesel in each cycle. After each enzymatic transesterification process, lipase immobilized magnetic nanoparticles was removed by magnet and washed twice with hexane and ultrapure water to remove any foreign substance.

The role of methanol: oil ratio in the production of biodiesel was optimised under transesterification reaction conditions; methanol: microalgae oil (4:1), 300 mg of lipase immobilised MNPs at a temperature of 45°C, 400 rpm respectively for about 6 h. The maximum biodiesel yield achieved was 87.6%, when the molar ratio is very close to 4:1. However, beyond the molar ratio of 5:1, the excessively added methanol has no significant effect on the production of biodiesel yield shown in the FIG. 1. El-Batal et al. [13] reported that lipase isolated from Aspergillus niger were coated with barium ferrite magnetic nanoparticles and achieved maximum yield as 90% with a molar ration of 4:1. The increase of methanol concentrations will affect the FAME conversion. Similarly, Jyothi ramalingam and Wang et al. [14] reported that the high methanol concentration that inhibits the activity of lipase enzyme during the conversion of the FAME in the biodiesel production. 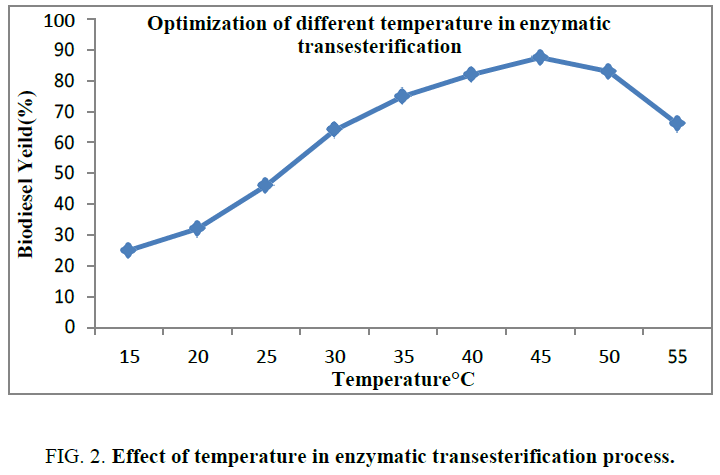 The role of catalyst was investigated in enzyme transesterification reaction at constant temperature 45°C and 400 rpm for about 6 h. It was found that in 300 mg of catalyst resulted in maximum biodiesel yield as 87.6%. The amount of catalyst plays an important role in enzymatic transesterification and verified with different amount of catalyst ranges from 100 mg- 500 mg as shown in the FIG. 3. At low enzyme concentration 100 mg, the transesterification process was incomplete and resulted in a low biodiesel yield 42% and then increasing the concentration of catalyst does not play any significant increase in the yield. Kumari et al. [16] Maceiras et al. [17] and Jegannathan et al. [18] reported that the higher concentration of biocatalyst affected the active site of the substrates and so the aggregation of enzyme will occur as a result of this decrease in the biodiesel production yield. The superfluous enzyme will reduce the activity of lipase and decrease the percentage yield of biodiesel production [19]. 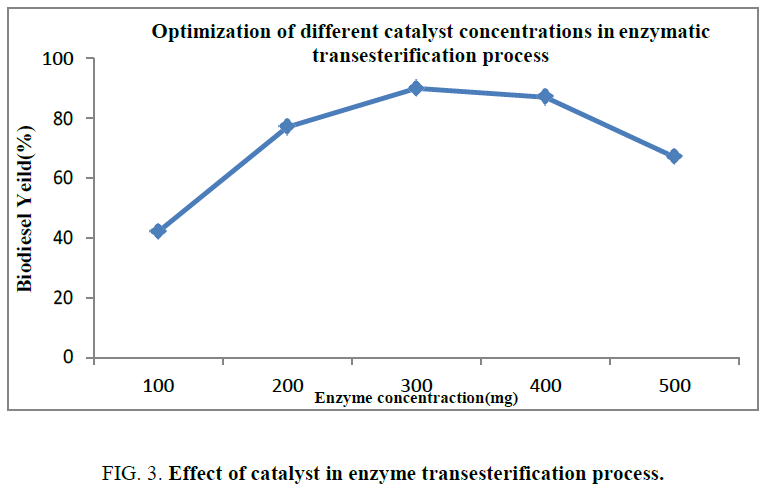 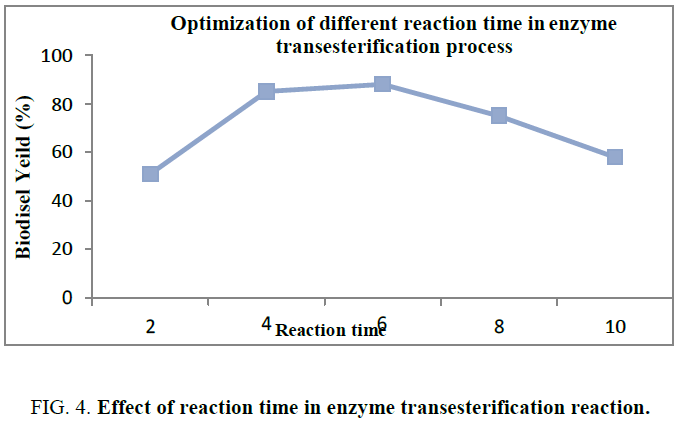 In enzymatic transesterification reaction, agitation is one of the most important parameters. Kumari et al. [16] reported that the immobilization reaction takes place properly only if the agitation is properly optimised. The reactants need to diffuse from the bulk liquid to the external surface of the particle and then into the interior pores of the catalyst. To study the effect of agitation on the biodiesel production, the reaction was conducted in between 100 rpm-500 rpm with an interval of 100 rpm as shown in the FIG. 5. The maximum percentage yield of biodiesel was found to be 87.6% at 400 rpm. Li and Yan [19]; Ognjanovic et al. [22]; Tran et al. [15] reported that the agitation also enhances the rate of reaction, they play an important role in the mass transfer resistance between oil and methanol and then immobilizes lipase at the catalyzing interface, finally enhancing the reaction rate. On the other hand, when the speed reaches beyond 500 rpm, the biodiesel percentage yield was also decreased. This is due to the damage of the immobilized beads, leads to the inactivation of lipase by mechanical agitation process. 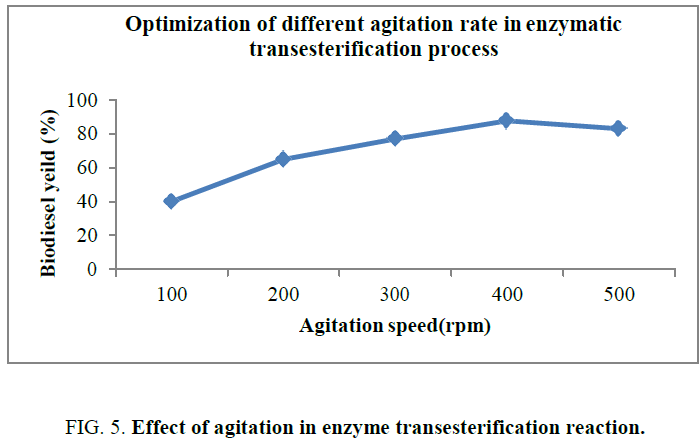 The main advantage of lipase immobilized catalyst is its reusability. Gharat and Rathod [9] reported that catalyst reusability was important parameter to decide the possibilities of industrial-scale enzymatic biodiesel production. The present investigation is mainly based on the stability and reusability of immobilized lipase from Aspergillus niger. There was no significant loss of lipase activity even after immobilized enzyme catalyst was used for five cycles as shown in the FIG. 6 . The previous study clearly reported that lipase immobilized magnetic nanoparticles was used for about six cycles without any loss in the biodiesel percentage yield [15]. Likewise, Batal et al. [23] investigated the activity of immobilized lipase on magnetic nanoparticles and it was found that at sixth cycle without any negative impact on the biodiesel production yield. The gradual enzyme loss was observed only at seventh cycle, because of the leakage of lipase from the support due to the washing of biocatalyst. It was stated that the conformational change of lipase and inhibition of lipase by methanol during the methanolysis reaction may be the reasons for enzyme activity loss when repeatedly used [24]. The reusability of enzyme helps in cut down the purification cost of the methyl esters and enzyme cost [25]. 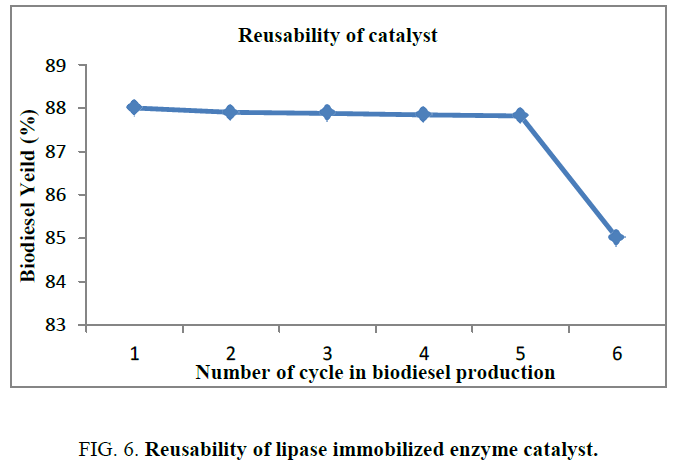 The biodiesel was produced by using the optimized physical and chemical parameters in enzymatic transesterification reaction. The FAME obtained was characterized by using gas chromatography as shown in the FIG. 7 and TABLE 1. Based on the GC-MS results, saturated and unsaturated fatty acids which are required for the biodiesel were identified. 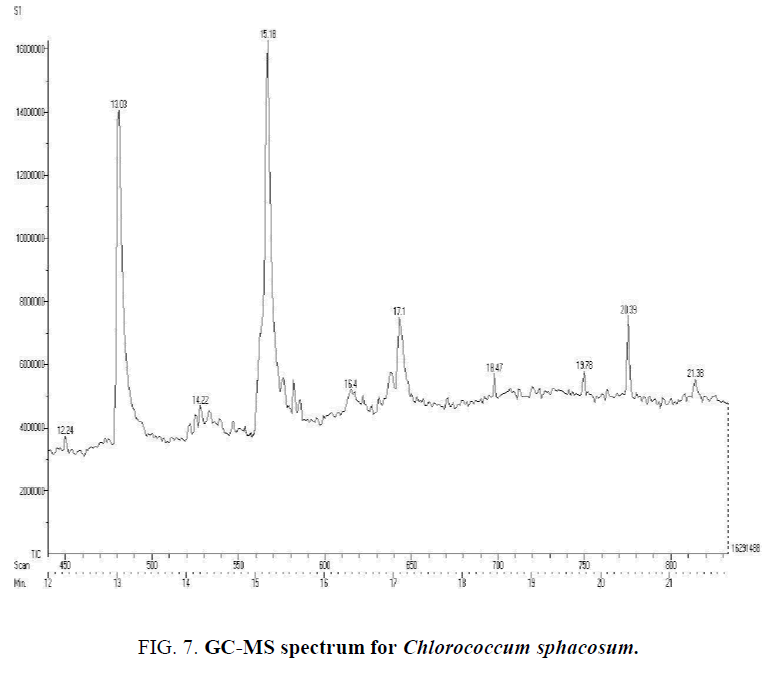 The results showed that the properties of produced biodiesel were compared with the diesel standard as shown in the TABLE 2. Based on the results, the low viscosity of the produced biodiesel indicates that it can be directly used in existing engines and also the heating value slightly lower, due to the high percentage of oxygen content of the produced biodiesel, which is not present in the conventional diesel. The present of the oxygen content in the produced biodiesel may help to achieve the complete combustion. In biodiesel production, the flash point is higher and it is safer for storage and transportation. The cetane number of the biodiesel was found as 57.6 which help in good cold start behavior and a smooth run of the engine. If the fuel has low cetane number it leads to the increase in the exhaust emission because of incomplete combustion. Cetane number is a relative measure of the delay time between injection and auto-ignition of fuels [26]. In earlier report, it was suggested that the viscosity affects the atomization quality, size of drop and penetration. The problem of high viscosity fuel is poor combustion, increased exhaust smoke and emissions. Also, it leads to the formation of large fuel drops during injection which may cause poor fuel atomization during the spray, increases the engine deposits, needs more energy to pump the fuel, and wears fuel pump elements and injectors. Density affects the air-fuel ratio and amount of biodiesel injected into the combustion chamber. The cloud point indicates the cold flow properties of biodiesel and also too high unsaturation leads in oxidation problem and so stabilizer should be added to extend the storage life of biodiesel [27]. The flash point, pour point and cloud point of the produced biodiesel was found as 155°C, -12°C and 7°C respectively.

The present research work is mainly focused on the low-cost biodiesel production from the newly isolated micro-algal species from the agro-industrial waste water. The isolated algal strain contains high lipid content and then optimized process parameters by using physical and chemical properties to increase the biodiesel production yield. The main merit of the research work is low-cost cheap catalyst lipase immobilized magnetic nanoparticles. The catalyst immobilization addresses several issues: repetitive and continuous use, localization of the interaction, prevention of product contamination, reduction of effluent problems and material handling, and effective control of the reaction parameters. In this study, we have synthesized a novel catalyst for the production of biodiesel and achieved high percentage yield in FAME conversion. Similarly, on the other hand, we had analyzed physical and chemical properties of the produced biodiesel and compared with diesel ASTM and EN standards. In near future, the produced biodiesel can be used as a green fuel in diesel engine.