The paucity of proper awareness on maternal and child health in rural area fallouts in an alarming number of maternity and infant deaths. In developing nations like India where there are more rural areas, pregnant women are not conscious about the balanced nutrition diet and their health care during their earliest stage of pregnancy which causes early infant death or handicapped child. The major challenge for obstetricians is preterm labour and premature baby. We have proposed an integrated monitoring system for a woman during antenatal period using a mobile cognitive radio and body sensors which can communicate in wireless medium and the recurrent data stored in cloud storage as a medical history. The simulation model of a heterogeneous network has created to obtain the performance comparison of various protocols based on quality of service of data transmission.

Maternal health indicators help the groups of women and infants at the national and sub-national level who cannot access maternal health services. There are many researches are endured in the field of maternal health care. In earlier research, this system works based on mobile GIS so that it can able to connect nearby hospital for any emergency purpose and online registration can also available thereby SMS will be send through GPRS network. It has ID number of ad directly connect to the server system for accessing the database which helps in finding the location. Then, sensors placed on cervix in order to monitors the fetal heart rate and the uterine contractions using wireless cardiotocography device.

This paper proposed a cohesive observing system for maternal healthcare monitoring, an innovative electronic sensor system is implemented and this device uninterruptedly monitors a pregnant woman who will be imminent to delivery. Wireless transmitting facilities are arranged to help in progressing during pregnancy to a central monitoring agency. This aids to give instructions during operation by video conferencing that makes continuous contact with the attending physician at the hospital of the pregnant lady. So, they can get information about routine nutrition diet and vital monitoring parameters like infant heartbeat, labour delivery time, blood glucose level, temperature, pressure, ECG of a mother for the entire period of pregnancy. Presently there are various tools that are used to detect abnormalities and stay away from critical situation in time. Mobile cardiotocography techniques are used to send data in real time to a smartphone which communicates the information in a cloud. The data are collected and transmitted to the smartphone by sensors. The data available in sensors is monitored by arduino module continuously. The physician who is in hospital can access the data using our smart application. The pregnant woman can follow diet chart that could help in maintaining the health conditions. In case of any abnormality, the smart system automatically connects the physician which produces an alarm that indicates the data is not in normal range. The major advantage of this proposed system is that it can provide essential information at any time and at any location during emergency period.

Warren et al. [3] and Fensli et al. [4] projected the interoperability of wireless body area network and the infrastructures of the health care systems. Virone et al. [5] developed network architecture for smart healthcare for continuous monitoring of assisted and independent-living residents. Ntareme et al. [6] analyzed the delay tolerant network (DTN) service and protocol stack and present an implementation called "Bytewalla" on the android platform. It allows the use of android phones for the physical transfer of data between nodes with no physical links. Location based services (LBS) refers to the general class of services that use location and time data as control features in computer programme. Health information and services need to be delivered in real-time, and, location of the patients’ must not be a barrier. LBS for healthcare by Ronnie and Sungwon [7] increases patients’ self-confidence and autonomy with the help of wireless body sensor networks capable of monitoring, measuring health conditions and transmitting the same for expert advice. BEDnet [8] is a Bluetooth-based mobile ad hoc networking implementation in Java. It uses a simple scatternet formation algorithm and DSDV routing protocol. BEDnet has a poor data transfer speed due to limitations of J2ME. It can only be used by a single application and does not work on Android and iOS devices. As the successor of BEDnet, Beddernet [9] is Bluetooth based mobile ad-hoc networking software, developed for Android OS. It is built on top of Bluetooth’s radio frequency communication (RFCOMM) protocol also implements DSDV routing protocol. Compared to BEDnet, Beddernet has 10% increased communication throughput and supports both unicasting and multicasting. Sebastian et al. [10] and Prema [11] proposed a method to capture image of the patients’ heart rate and generate alert regarding the patient’s condition to the physician.

The commercially available fatal monitoring system for clinical use was designed by Hammacher and Hewlett-Packard in 1968 using external tomography and phonocardiography, but the technological improvements have permitted further development of more and more accurate tools of monitoring. As per the American College of Obstetricians and Gynaecologists (ACOG) statement, electronic fatal heart rate monitoring is increased in use, e.g. 62% of pregnant women in 1988, 74% in 1992 and 85% in 2002. Ananth et al. [12] presents the use of electronic fatal monitoring in United States during the 1980s helped to increase the live births.

Recently there is an increasing interest for using wireless approaches for data transfer. Budinger [13] presents some classical approaches in deploying wireless monitoring for measuring body parameters. As it can be seen in Rohan et al.’s [14] work, the need for a low-cost wireless and mobile fatal computing environment is based on the carrier sense multiple access with collision avoidance (CSMA/CA) using over wireless communication networks (wireless LANs). It is used to provide sufficient bandwidth for office applications with relatively limited mobility which replaces wired networks where it is impractical and expensive to use cabling monitoring system is increasing, especially for pregnant mothers living in areas with limited access to healthcare. Using a Bluetooth module attached to the fatal heart rate (FHR) monitoring device provides the advantage of using a smart-phone and set alarms to prevent high-risk situations.

The information can be accessed by the heterogeneous network that combines with the high speed mobile communications and also to the current internet architecture which provides conduct business and entertainment. Wired and wireless sensor networks help for accessing and exchanging the stored data and information that are connected to the servers of the system. The implementation of mobile based monitoring system is used to monitor the pregnant women and reducing difficulties in the communication. It will avoid new born deaths.

The overall system (SMS form, system's application etc.) was adjusted with the collated patterns and challenges of the end users. Figure 1 illustrates the operating principles of the monitoring device; the system architecture of the mobile management system facilitates the interface between the doctors in the hospitals and the helpers in the health care centres. This work aims to facilitate the usage of wired-cum-wireless technology reliably and efficiently to benefit the patients in remote healthcare centres using android technology.

The Proposed system helps to monitor the health condition of pregnant women at regular interval. This heterogeneous framework consists of wireless body sensors, smart mobile phone, cloud and cognitive radio network. This framework consists of 3 modules. The first module is the obstetrics department information system where the physician can add different information about the pregnant women and nutrition chart for the women. The second module consists of the mobile application based on Android with two main functions: to monitor the pregnant women based on the data received from the sensors and the second to help the pregnant with general information about the pregnancy. The third module is composed of the smart sensors and gives the possibility to send the data collected from the sensors using cognitive radio. Communication is realized based on cloud computing. The system monitors the pregnancy status evolution from home such as infant heartbeat, labour delivery time, blood glucose level, haemoglobin, temperature, pressure, ECG and routine nutrition diet for the entire period of pregnancy. These techniques help in continuous monitoring and in maintaining the concentration of haemoglobin and glucose in blood at a particular rate, the properties of oxygenated and deoxygenated haemoglobin based on the differential light absorption. The accurate results of both heart beat and saturation of oxygen can be observed by this method. The data are collected and transmitted to the smartphone by the sensors. Arduino module is required to monitor the data from the sensors. The information about the collected data is continuously transferred to the smartphone at every second. If any abnormalities occur it is indicated by the alarms which are handled by the physician.

According to the data it can be accessed and monitored in real time that use to alert the triggering facility and also the reporting exact critical position of pregnant women’s situation. So, it is more important for the physician to handle difficult conditions of any pregnant woman. The field operative energy- efficient heterogeneous framework is designed for the immediate aid of pregnant women in remote areas, especially at the time of the emergency where there is no one nearby. It helps mankind and avoids many infant death and handicapped infant happening because of malnutrition. It enhances speedy communication between the pregnant women and the doctor through internet. This heterogeneous test bed is used in the telemedicine applications. The advantage of using this system that the pregnant woman can follow her pregnancy status evolution from home such as infant heartbeat, labour delivery time, blood glucose level, temperature, pressure, ECG and routine nutrition diet for the entire period of pregnancy.

The implementation is based on the frame work of a real-time telemedicine. The design setup consists of 10 mobile nodes at patient’s end and 4 wired nodes at doctor’s end. Comparison of the performance on simulated results of energy efficient link stability has been analysed with the routing protocol (EELSRP (SIM)). Based on end-to-end delay, throughput, packet delivery ratio and energy consumption, the performances of EELSRP (SIM) and real time protocol EELSRP (RT) were compared. By the observation, it is noticed that the delays between these two protocols are increased from sources 1 to 10 nodes (Figure 2). This occurs due to higher level of network. There is congestion and multiple access interferences at certain regions of the ad-hoc network. There is none of mechanism for load balancing the data traffic in the network. The real-time routing protocol (EELSRP (RT)) is 51.3% less when compared to its simulated version according to the average end to end delay. As shown in Figure 3, EELSRP (RT) throughput is increased by 24.7% when compared to the simulation protocol (EELSRP (SIM)). Figure 4 shows the size of the packet delivery ratio that runs with EELSRP (SIM) protocol in real time from the source to each destination node. The comparison of energy consumption between EELSRP (RT) and EELSRP (SIM) is lesser than 13.3% analyse among 10 individual nodes as shown in Figure 5. 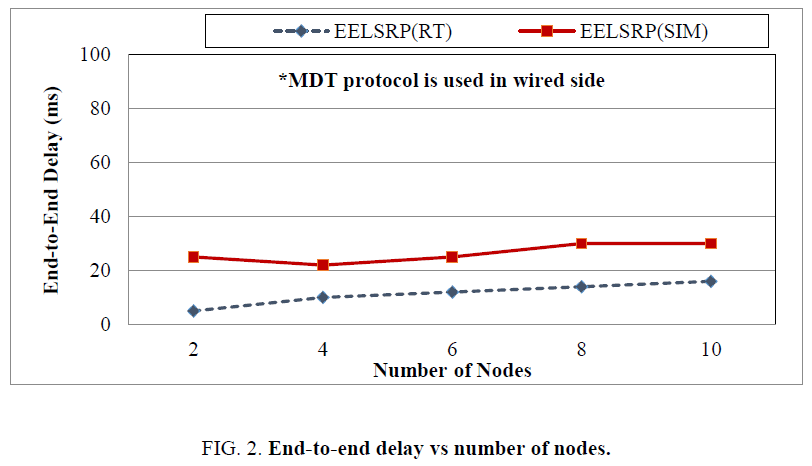 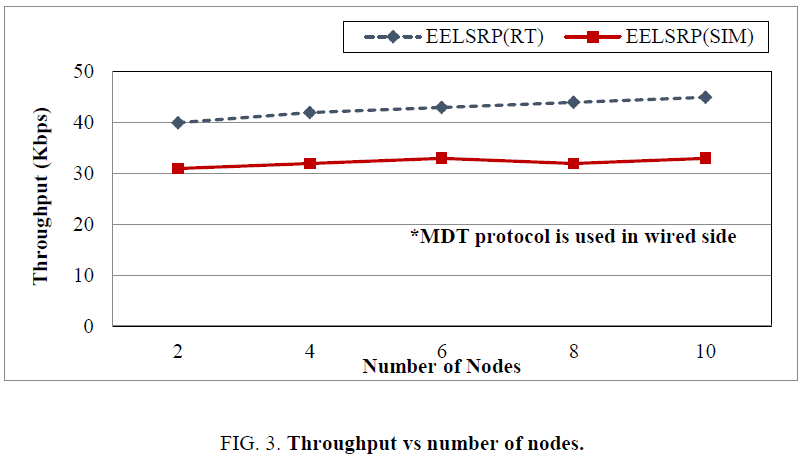 Figure 3: Throughput vs number of nodes. 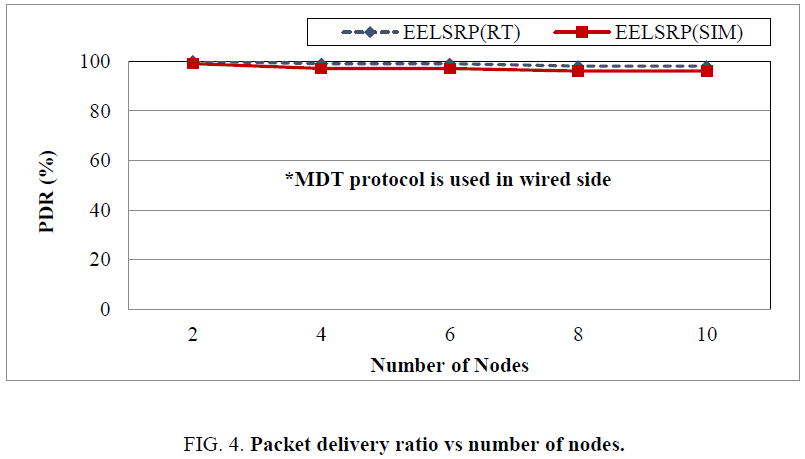 This paper presents simulation and real time implementation of heterogeneous network. It integrates different sensors for monitoring the pregnant women from rural area during critical conditions. It avoids early infant death or handicapped infant delivery because of malnutrition by providing nutrition chart in regular time interval. Wireless cardiotocography device is used for monitoring the foetus heartbeat. 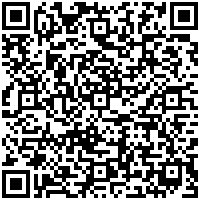