Silica supported V2O5 was synthesized and elucidated by X-ray diffraction; using scanning electron microscopy and Fourier transform infrared spectroscopy. From the data obtained crystalline phase of V2O5 overlapped over the silicate amorphous matrix. V2O5/SiO2 has been used as an efficient and eco-friendly catalyst in the synthesis of 4H-pyran derivatives. A series of 2-amino-3cyano-4H-pyran derivatives was synthesized through one-pot reaction of ethylacetoacetate (EAA), malononitrile and aldehydes. In the presence of catalytic amount of V2O5/SiO2 the reactions occurred under stirring at 80°C temperature in solventless conditions. Keywords

4H-Pyran derivatives have been considered as a main unitin most oxygen-containing heterocyclic compounds. 4H-Pyrans are synthesized through one-pot Knoevenagel-Michael cyclo-condensation reaction. In addition, they have been attracted a great deal of interest related to their biological and pharmaceutical properties such as antibacterial, antitumor, antitubercular, pigments, antiviral and spasmolytic activities [1]. So that, a lot of researchers have been developed many protocols for 4H-Pyrans synthesis by reacting aldehydes, malonitrile and 1,3-dicarbonyl compounds using various catalysts, such as SnCl2/SiO2, MgO, hexadecyldimethylbenzyl ammonium bromide, potassium phthalimide, silica nanoparticles and silica-bonded N-propylpiperazine sodium n-propionate [2] .

Multicomponent reaction (MCR) or multicomponent process (MCP) are considered as one of the most important synthetic methodology in which three or more reactants attached together in a one-pot reaction to form targeted products. The characteristic advantage of MCRs is that the targeted products contain nearly all portions of substrates, generating chiefly no by-products. That makes MCRs really ideal, green and eco-friendly reactions system. Targeted products can be obtained in one-pot with much less steps. Therefore, MCRs have been attracted much attention in many research fields, such as discovery of key compounds in medicinal chemistry, or combinatorial chemistry [3,4].

The heterogenous catalytic reactions have played important role in developing organic synthesis. Because of their, operational simplicity, environmental compatibility, reusability, non-toxicity, economic and easy removal from reaction mixture [5,6], so we have presented the following catalytic system from V2O5/SiO2 in the synthesis of some important 4Hpyran."

To a suspension of SiO2 (for column chromatography, mesh 70-230, 0.06-0.2 mm, 2 g) in 50 ml CHCl3, V2O5 (1 g) was added. The mixture stirred at room temperature for 90 min. The solvent was evaporated at room temperature overnight to obtain a brown solid of 50% (W/W) V2O5/SiO2. The catalyst was characterized using XRD diffraction scans and collective FTIR spectra (FIG.1).

FIG.1. XRD diffraction scans and collective FTIR spectra of received silica and vanadium dioxide before the catalyst preparation and after interaction.

A mixture of aldehyde 1a-l (0.5 mmol), malononitrile (0.5 mmol), ethyl acetoacetate (0.5 mmol) and catalyst (0.5 mmol) was placed in a 25 mL round-bottom flask equipped with a condenser. The mixture was stirred at 70 °C, under solvent-free conditions, until the consumption of the substrates. The reaction was monitored by TLC. After cooling, the catalyst was removed from reaction mixture by dissolving in hot ethanol and filtration. The product mixture was directly submittedto recrystallization from water/ethanol (90:10), affording the corresponding pure 4H-pyran derivates 2a-2m.

The catalytic reactions Study attracted our group interest [7-10] and so we presented this work. Silica supported V2O5 was tested as an efficient and ecofriendly catalyst in the synthesis of 4H-pyrans. Firstly, the reaction was optimized starting from measure the effect of catalyst molar ratio. As a model example we mixed benzaldehyde, malononitrile and EAA under solvent less condition and different ratios (5,10,15 mol%) of the prepared catalyst after the appropriate time the products 2a was obtained in the (60,81,82 yield %) respectively. And so, the reaction proceeds well in the presence of 10 mol% of V2O5/SiO2 catalyst. Also, the temperature degree was examined as in TABLE 1. Thus, the optimized reaction conditions include the use of 10 mol% of the silica supported V2O5 catalyst at 70°C.

TABLE 1. Effect of temperature on synthesis of 2a.

The reaction was extended by the synthesis of a series from 2-amino-3-cyano-4H-pyran derivatives 2a–2m (TABLE 2) from a diversity of aromatic aldehydes 1a-1m. The efficacy of the catalyst was examined on all multicomponent reactions with malononitrile and ethyl acetoacetate to afford tetrahydrobenzo [b] pyrans 2a-2m in good to excellent yields (Scheme 1). All reactions were done under solvent free and 70oC conditions. The reaction time ranged between 1–6 h to produce targeted products. Various aldehydes 1, including electron-donating and electron-withdrawing groups, and from this we noticed that the presence of electron releasing group give less effect in improving the reaction time and the reaction yield compared with the aromatic aldehydes bearing electron-withdrawing groups. As shown in (TABLE 2) nitro and halogens that act as electron withdrawing groups give more good yields than those substituted by electron-donating groups such as methoxy or methyl. The final products were purified by classical recrystallization method in ethanol as solvent then dried under vacuum oven conditions. The structures were confirmed by compared with the literatures melting points also the products were further confirmed by their spectroscopic data (FT-IR, 1H NMR and Mass data). 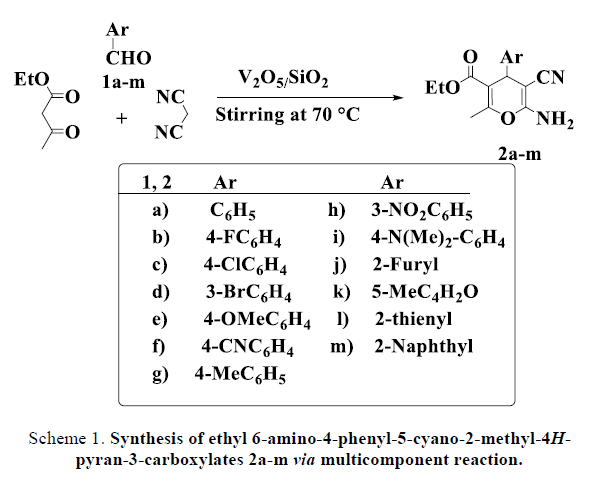 The suggested mechanism based on the idea of common reactions like Michael addition, Knoevenageland ThorpeZiegler reaction on the way of synthesis the targeted product 2. Firstly, the reaction was suggested to ongoing by electrophilic activation of carbonyl group in aldehyde by the prepared catalyst V2O5/SiO2 to increase its electrophilicity. The aryl aldehydes and malononitrile formed corresponding arylidene (Knoevenagel product) A. which undergoes nucleophilic attack from EAA anion to give the Michael adduct B, then an intermolecular cyclization occurs through the formation of [1,3] sigmatropic proton shift of the iminopyrans C and this converted into a stable 2-amino-4H-pyran ring system. In conclusion, the synthesis of 2-amino 4H-pyran ring considered as regioselective reaction (Scheme 2 explaining theplausible reaction mechanism) [11-15]. 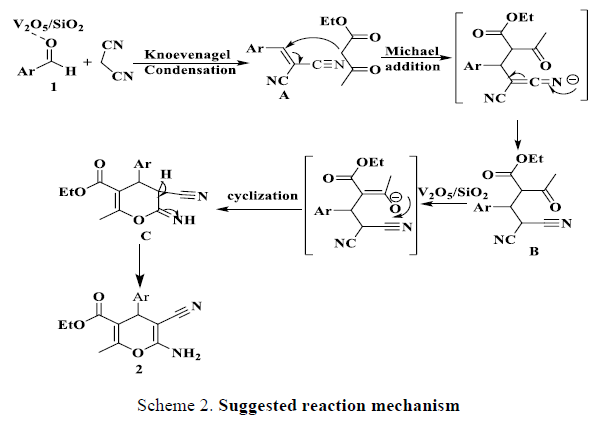