2Department of Pure and Applied Chemistry, Nantional Centre for Nanoscience and Technology, University of Chinese Academy of Sciences, China

Biodiesel is a renewable energy which is considered to be a pivotal solution to combating global warming and to stabilize the climate through the reduction of greenhouse gas emissions. Desert date (Balanite aegyptiaca) seeds oil was used to produce biodiesel using a heterogeneous catalyst. Mahogany (Khaya senegalensis) fruit shells was physically activated and used as a catalyst. The physico-chemical analysis of the Balanite aegyptiaca seeds oil gave the oil yield of 49.9%, saponification value of 168.6 mgKOH/g, iodine value of 78.7 gl2/100 g, free fatty acid of 0.18 mg KOH/kg, specific gravity of 0.927 and non-drying oil. Spectroscopic analysis of catalyst was carried out in order to determine the different functional groups by Fourier Transform Infrared and to study the surface morphology by scanning electron microscope. Broad band at 3164.5 cm-1, very weak peaks at 2482.4 cm-1, 2117.1, 1871.1 cm-1 and 1561.8 cm-1, strong peak at 1408.9 cm-1, 872.2 cm-1 and 3164.5 cm-1 were revealed after physical activation. These peaks corresponded to C-H stretching, C-C stretching, C=O, N-H, C-O and C-H bending. SEM micrograph showed that the surface area was not smooth but comprised of some ridges, crakes and pores. Biodiesel yield was 80.0% with specific gravity of 0.88 and viscosity of 5.7 mm2/s. GC-MS showed the presence of different fatty acid methyl esters at different retention times. The presence of the various methyl esters showed that trans-esterification reaction is capable of synthesizing unique compounds and even constitutional isomers. This work concluded that Balanite aegyptiaca seeds oil is a good material for biodiesel production.

Trans-esterification of vegetable oil to form biodiesel could either be by direct acid, enzyme or based catalysts. However, base catalysts are frequently used in biodiesel production due to its minimal drawbacks. Although, they are highly hygroscopic and less effective in the of presence high concentration of free fatty acids which requires continual regeneration for further use. The effects of catalyst concentration, alcohol/oil molar ratio, temperature and rate of mixing on biodiesel production have been studied (Meher et al.) [1].

Nigeria presently imports about 80% of her petroleum based products from oversea and the fall in price of crude oil and other micro economic activities had led to recession since 2015 (Oniya and Bamgboye) [7].

Alternative sources of petroleum-based fuel, including diesel and gasoline fuels, the cost of raw materials to produce biodiesel in commercial-scale is a serious challenge [8,9]. In addition, using edible virgin oil such as sunflower, rapeseed, palm, and soybean oil produce biodiesel is debatable. Thus, non-edible oils, waste oils and animal fats have opened a new frontier [10].

Khaya senegalensis widely found in sub-Saharan Africa is valuable for timber, fuel wood and medicinal purposes (Arnold) [11]. The fruit of Khaya senegalensis is spherical woody capsule, 4-6 cm in diameter contains at least six seeds. Mahogany seeds have about 53% by weight of oil (Eromosele, et al.) [12], used in traditional medicine by several African communities (Bamaiyi et al.) [13]. However, the industrial applications of the fruit shells have not been properly documented.

The production of solid catalyst from carbonaceous materials requires careful approach so that the physical or mechanical properties of all intermediates are not destroyed. Filtration, drying, calcination, and forming rather than the batch method are recommended (Mueller et al.) [14]. Physical activation processes thermally decomposes the precursor and activate by controlled gasification of the material between 800 C to 1000 C although, be carried out without any prior production of a char [15].

Desert date (Balanites aegyptiaca) fruits were purchased at the Girei market in Girei Local Government Area of Adamawa State – Nigeria. The Mahogany (Khaya senegalensis) fruit shells were collected on the campus of Modibbo Adama University of Technology in Girei local Government Area, Yola Adamawa State-Nigeria. Sampling was carried out according to the ASTM D5369-93 method.

Pre-treatment of raw materials: The shells of Mahogany (Khaya senegalensis) was washed, sun-dried for two days and crushed to small particle size (FIG. 1a and 1b). The crushed samples was washed well with distilled water till the wash water becomes colourless which was then dried at 110°C in an oven for 8 hours to get rid of moisture and other volatiles. The pre-treated materials were kept in a sample container for carbonization and activation process (Girgis and Ishak) [16].

Physical activation: This was carried out according to the method used by Abdul et al. [17]. 5 g of the pre-treated material was placed in a crucible and carbonized at temperature of 1000 C for 2 hours. The sample was allowed to cool in a desiccator then removed and grind, sieved with a 300 μm sieve and stored in an air tight bottle.

The morphological studies of the catalyst produced by physical activation: The morphologies of Mahogany fruit shells catalyst produced by physical activation were conducted by scanning electron microscope operating at 25 kV. Oven dried porous sample was mounted on an adhesive carbon tape attached to an aluminium-stub and subsequently sputter coated with platinum for 5 min in a JFC-1100 sputter coater. SEM magnification was selected at 370, 500, 1000 and 1500.

Fourier Transform Infrared analysis of catalyst produced from Mahogany fruit shells: Catalyst was analyzed was using a PERKIN-ELMER spectrum One FT-IR spectrophotometer. Each sample was grind to fine powder and oven dried at 11°C for 2 hours and turned into pellet hydrolytically. The pellet was analysed immediately and the spectra produce was recorded. A pellet prepared with an equivalent quantity of pure KBr powder was used as control (Sugumaran et al.) [18].

Balanites aegyptiaca seeds preparation: The seed of Balanites aegyptiaca was screened while those in good condition was soaked overnight in large bowl of clean water and washed to remove the glycoside pulp from seed coats. The washed seeds were air dried and then crushed by a metal hammer to obtain seed nut. The resulting nuts were oven-dried at 60°C for 2 hour and stored in a clean container (Babagana et al.) [19].

Determination of oil yield (%) of Balanites aegyptiaca seeds: The percentage yield was carried out according to the method adopted by Babagana et al. [19]. Ballanite eagyptaca seeds oil extracted was purified to remove solvent. The oil was weighed and the percentage of oil yield was calculated using the equation below:

Determination of saponifaction value of Balanites aegyptiaca seeds oil: This was carried out according to the American Oil Chemical Society Method (1987) as adopted by Manji et al. [20]. 2.0 g of the crude oil was weighed into a 250 ml conical flask and 10% alcoholic KOH was added. It was refluxed over steam for 1 hour with occasional swirling. 1 ml of phenolphthalein indicator was added at the end of the refluxing time and solution titrated with 0.5 M HCl.

Determination of iodine value of Balanites aegyptiaca seeds oil: This was carried out as describe by Nielsen and adopted by Manji et al. [20]. 2.0 g of the crude oil was measured into a 100 ml conical flask and 5 ml Dam’s iodine was added. The flask was corked and placed in a dark cupboard for 5 min. 5 ml of 10% KI was added followed by 20 ml of distilled water. The solution was titrated with 6.6% sodium thiosulphate in the presence of 1 ml of 1% starch indicator until the blue colour turned colourless.

Determination of free fatty acid of Balanites aegyptiaca seeds oil: This is the percentage by weight of specific fatty acid. The method used is as described by Harold et al. (1990) [21]. 2.0 g of the crude oil was weighed into a conical flask and neutralized with 1:1 mixture of 95% ethanol and 10 ml diethyl ether was added and mixed thoroughly. The solution was titrated using 0.1 M NaOH and phenolphthalein indicator with constant stirring until a pink colour which persisted for 15 seconds was observed.

Determination of moisture content Balanites aegyptiaca seeds oil: Moisture content of oil is expressed as the weight loss (%) when the oil dried to a constant weight at 110°C. Crucible and content was heated in an oven at 110°C and cooled in a desiccator and weighed. This process was repeated until a constant weight was attained (Harold et al.) [21].

Biodiesel production from Balanites aegyptiaca seeds oil: Single stage step by step trans-esterification was used in the production of biodiesel catalysed by agricultural waste-based heterogeneous catalyst produced from Mahogany shell. 30 ml of Balanites aegyptiaca seeds oil was measured and poured into 250 ml conical flask and heated to a temperature of 40°C. 90 ml of methanol was poured in a round bottom flask with Soxhlet apparatus and heated for 5 min. This was done to purify the methanol.0.25 g of catalyst was weighed. A solution of 0.25 g catalyst and 90 ml of methanol (i.e. mole ratio of oil to methanol of 1: 3) was prepared in a 250 ml beaker.

Gas chromatography and mass spectrophotometry of biodiesel produced using catalyst prepared from Mahogany fruit shells: Sample injection tool was placed in the oven at a temperature of 50°C maintained for 1 min. The temperature was increased to 325°C at the heating rate of 10°C/min and held for 2 min. The GC-MS interface temperature was set to 250°C with Helium used as a carrier gas with a constant flow of 1.2 ml/min. NIST Library was used to identify the compounds representing peaks in the GC spectrum (Alnuami et al.) [24].

Table 1 is the different physical and chemical parameters of Balanites aegyptiaca seeds oil. From the results it was observed that Balanites aegyptiaca seeds oil is potential seed oil for the production of biodiesel. The seed oil has a considerable yield, the saponification, iodine and free fatty acid value falls within the range of vegetable oils suitable for biodiesel production. The oil showed a lower moisture content and non-drying characteristic which can be considered suitable for biodiesel production.

FIG. 2 showed the morphology of catalyst produced from Mahogany fruit shells by physical activation at 900°C. Cavities were visible on the surface of the catalyst of different sizes. FIG. 3 showed the types of particles on the surface. The total number of particle per size was obtained (FIG. 4). These figures revealed important features of the surface of catalyst produced from carbonaceous materials. The different pores suggest that these could be sites that may adsorb reactants during catalysis. Also, the size of pore could be related to the different functional groups that may be present. This could assist in determining either the degree and or rate of catalytic activity. The nature of functional group on catalyst surface has been related to the nature of reaction that would proceed in heterogeneous catalysis.

Figure 4: Graph of cumulative (%) against area of particles catalyst produced from Mahogany fruit shells produced by physical activation at 900°C. 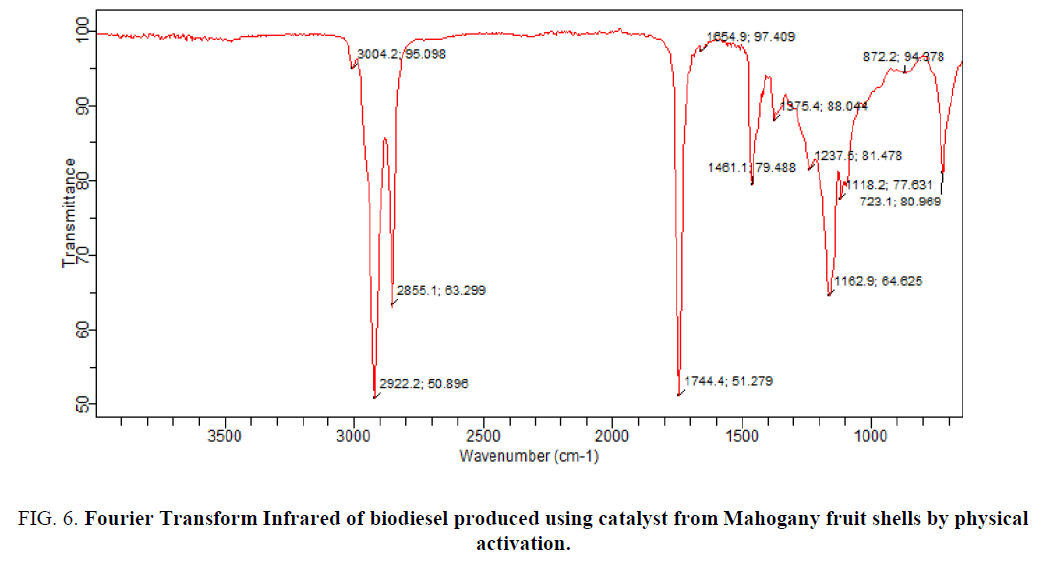 The research team is grateful to the Department of Chemical Engineering, Ahmadu Bello University, Zaria for chemical analysis and Modibbo Adama University of Technology, Yola for providing the platform for the entire work