Worldwide, food-borne diseases are a major health burden leading to high morbidity and mortality. Our research focused on safe food handling knowledge and behaviors among industrial kitchen handlers. We described one research mentioned to the description of handling knowledge, behavior about food safety awareness of industrial kitchen handlers (IKHs). Our results demonstrated that most of IKHs were lack of general handling knowledge about food safety. About knowledge, there were 21.5% of IKHs without knowledge of egg selection; 60% of IKH without knowledge of cross-contamination during processing. About handling, there were 20.4% IKHs without awareness of product label data; 65% of IKHs without handling behavior of washing vegetable under running water tap; 16.0% of IKHs used the same chopping board without any separation between raw and cooked products.

Food poisoning is a group of illnesses acquired by consumption of foods contaminated with a variety of causes. Foodborne diseases remain a major public health problem across the globe. The problem is more severe in developing countries because of lack of personal hygiene and food safety measures [1]. The global burden of infectious diarrhoea involves 3-5 billion cases and nearly 1.5 million deaths annually, mainly in young children, due to diarrhoeal disease caused by contaminated food and water. In a global scale addition, diarrhoeal disease has caused 3% mortality. The European Union summarized report on trends and sources of zoonoses, zoonotic agents and food-borne outbreaks in 2015. A total of 4,362 food-borne outbreaks were reported. In 2014, 864 foodborne disease outbreaks were reported in the US, resulting in 13,246 illnesses, 712 hospitalizations, 21 deaths, and 21 food recalls. The pathogenic organisms transmitted through contaminated foods are bacteria, viruses, protozoa and helminths. Foods that are contaminated may not look, taste or smell any different from foods that are safe to eat. Most commonly, the outbreaks take place due to the ingestion of pathogenic bacteria like Salmonella Typhi, Escherichia coli, Staphylococcus aureus, Vibrio cholera, Campylobacter jejuni, and Listeria monocytogenes [2]. Chemical contamination of food may result from various sources. Industrial or agricultural practices such as use of pesticides, fertilizers lead to entry of heavy metals such as cadmium, lead and mercury into the food chain.

Frederick et al. [3] suggested a critical need for action that is focused on preventing disease transmission within the food service industry. The challenges of foodborne pathogens and antimicrobial chemotherapy were shown [4]. Several factors contribute to foodborne illnesses like lack of self-hygiene of food handlers, no clean water supply and unclean environment [5]. Food handlers are the most common source of contamination because they can spread harmful organisms by means of fecal-oral route or skin lesions, as well as unclean kitchen utensils or kitchen counters [6]. Quinlan [7] reviewed the current state of what is known about foodborne illness among, and food safety risks for, minority and low socioeconomic populations, with an emphasis on the United States and Europe. Food safety in low and middle-income countries is also reviewed by Delia Grace [8]. These suggested that developing country consumers are concerned about foodborne disease; that most of the known burden of foodborne disease comes from biological hazards; and most foodborne disease was the result of consumption of fresh, perishable foods sold in informal markets. Foodborne disease was likely to increase in low and middle-income countries as the result of massive increases in the consumption of risky foods (livestock and fish products and produce) and lengthening and broadening value chains.

While foodborne illness is not traditionally tracked by race, ethnicity or income, analyses of reported cases have found increased rates of some foodborne illnesses among minority racial/ethnic populations. We carried out one research about knowledge, handling behavior affecting to food safety of industrial kitchen handlers.

Statistical analysis: Data of knowledge and handling of IKHs were collected by interview and observation with the support of an available check list. Time of the interview was about 20 minutes for one industrial kitchen handler. After receiving enough data, we did the statistical analysis by SPSS software version 19.0. Descriptive statistics (frequency, percentage %) was focused on personal characteristics, knowledge, handling of IKHs.

From Tables 1, 2 and 3, we could see variety of aspects such as age, gender, ethnic, education, career, working time, business type, shopping time and shopping duration relating to handling of IKHs.

Knowledge of IKHs in selecting and shopping food:

From Table 6, we could see that IKHs selected fresh vegetable 83.9%; while 2.9% didn’t know how to select raw vegetable.

Figure 1: Awareness of cross contamination in the industrial kitchen.

Table 9. Reason of cross contamination in the industrial kitchen (n=274). 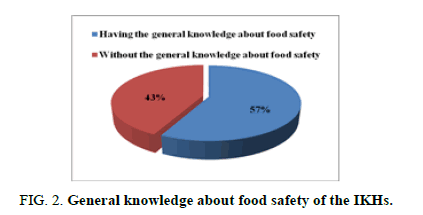 Figure 2: General knowledge about food safety of the IKHs.

Handling of selecting and processing food: From Table 10, we noted that 91.2% of IKHs usually bought canned and packaged food. Meanwhile 20.4% of IKHs didn’t care of information on product label. 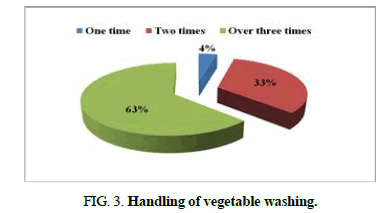 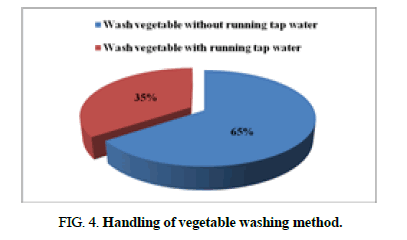 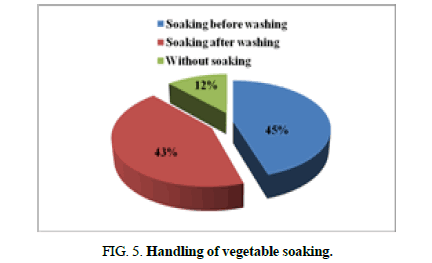 From Table 11, we noticed there were 94.9% of IKHs having hand wash before cooking. 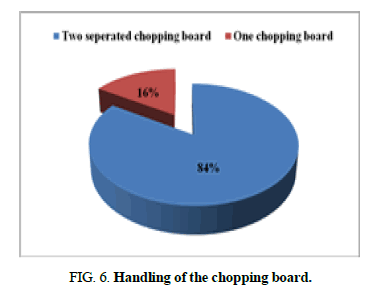 Figure 6: Handling of the chopping board. 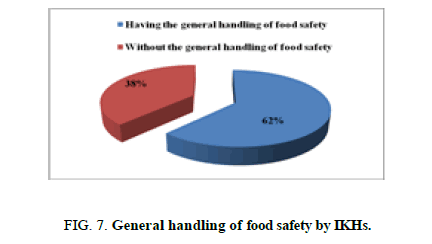 Sanitary condition in the industrial kitchen of factory

From Table 12, we noticed that almost tools were met requirement. However, there were only 20.1% of the water tap derived from high barrel.

Table 12. Sanitary condition in the industrial kitchen of factory.

From Table 13, we saw that 32.1% of IKHs having enough self-confidence about the food safety. 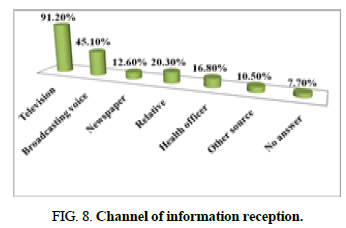 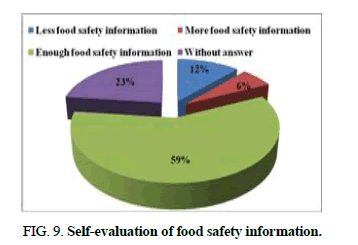 From Table 16, we noticed that the most preferred channel would be television 87.6%; next was the broadcasting voice with 28.1% and the lowest one was the newspaper with 5.8%. Moreover, there were 7.3% of IKHs receiving information via other source. 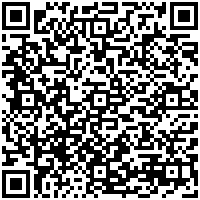