To isolate, characterize and determine the antimicrobial activity of compounds present in the n-Hexane fraction of the stem bark of Indigofera arrecta. Indigofera arrecta was collected, dried and pulverized. The pulverized plant material was exhaustively extracted with methanol, partitioned with different solvents. Based on the most active extract on the microorganisms, the n-Hexane extract was subjected to chromatographic techniques which yielded EB. EB was characterized using IR and NMR spectroscopic techniques. The structure of the isolated compound was established to be 3β, 22E-Sigmasta-5, 22-dien-3-ol (stigmasterol) using spectroscopic analysis. The isolated compound showed significant antimicrobial activity on some selected microorganisms.

Plant is being used extensively in our country as herbal medicine [1], it is necessary to have knowledge of the constituents of the plant of our native species. Numerous applications in traditional medicine have been reported: leaves and roots are used externally to treat itching and in an infusion or decoction as an antispasmodic, sedative, stomachic, febrifuge, vermifuge, abortive, diuretic and purgative, [2] Example to treat gum infections, snakebites, gonorrhea, epilepsy and jaundice; the fruits and seeds are used to treat ophthalmia. In Ghana an aqueous extract of leaves from immature shoots is administered orally to patients with diabetes mellitus [3]. Medicines for the management of peptic ulcer and methods of its preparation and use have been patented. [4]. Previous phytochemical investigations resulted in the isolation of ursolic acid, corosolic acid, 24-hydroxy corosolic acid, maslinic acid and 3b, 7b, 24-trihydroxy-urs-12-en-28-oic acid [5].

Indigofera is a very large genus comprising approximately 700 species and is distributed throughout the tropics and subtropics of Africa, Asia and the Americas. Africa and the southern Himalayas are richest in species. Over 300 species have been recorded for tropical Africa [6]. For indigo production, several Indigofera species are used but there are 3 closely related major ones: Indigofera Arrecta, Indigofera tinctoria L., which probably originates from tropical Asia but is now distributed pantropically and Indigofera suffruticosa Mill., originating from tropical America and now locally cultivated elsewhere in the tropics, including Africa and Madagascar but not in tropical East Africa [7]. The origin and identity of Indigofera plants cultivated for dye production is often obscure as a result of introduction, selection and the close affinity of species. Indigofera Arrecta is sometimes difficult to separate from Indigofera tinctoria (Worldagroforestry, 2016).

One kilogram of the dried powdered stem bark was macerated in methanol until complete extraction, the solvent were removed in vacuo to yield methanol extracts of 200 g. The methanol extract was partitioned into n-hexane, ethyl acetate and chloroform extracts. A portion of each of the three extracts was subjected to preliminary phytochemical screening using standard methods.

Liebermann-Buchard test: 1 ml of anhydrous acetic acid was added to 1 ml chloroform and cooled to 0°C then one drop of concentrated sulphuric acid was added to the cooled mixture followed by the extract. The solution was observed for blue, green, red or orange color that changes with time [8-16].

Salkowski test: A little quantity of the extract was dissolved in 1 ml chloroform and to it 1 ml of concentrated sulfuric acid was added down the test tube to form two phases. Formation of red or yellow coloration was taken as an indication for the presence of sterols.

The n-Hexane extract of Indigofera Arrecta was subjected to thin layer chromatography using pre-coated aluminum TLC plate and Hexane: Ethyl acetate (1:1) as solvent system to determine the profile of this extract. Two prominent spots were observed after visualization.

7 g of the n-Hexane extract was chromatographed over silica gel packed column of dimension 75 by 3.5 cm, the column was eluted continuously using neat n-Hexane and then n-Hexane: Ethyl acetate mixtures as solvent systems. Eighty four fractions, 100 ml each were collected. The fractions were pooled together based on their TLC profile to give four major fractions (F1, F2, F5 and P1) and the column was finally washed with methanol. Fraction 1 which showed one major spot and some minor impurities washed with methanol, pure white crystal which shows a single spot when spotted and was labeled as compound EB. Compound EB was isolated as a white crystal. EB was subjected to spectroscopic analysis to elucidate its chemical structure Figure 1. 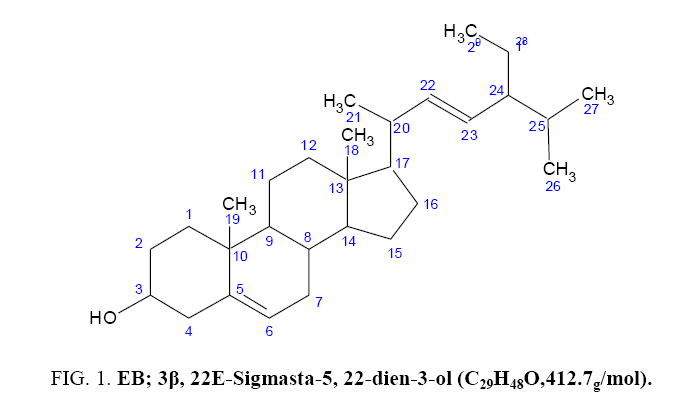 The n-hexane extract of Indigofera Arrecta was subjected to thin layer chromatography using pre coated silica aluminum TLC plate and Hexane: Ethyl acetate (7:3) as solvent system to determine the profile of this extract. Three prominent spots were observed after visualization.

Seven grams of the n-hexane extract was chromatographed over silica gel packed column of dimension 75 by 3.5 cm, the column was eluted continuously using neat n-Hexane and then n-Hexane: Ethyl acetate mixtures as solvent systems, 90 fractions and 100 ml each were collected. The fractions were pooled together based on their TLC profile to give four major fractions and the column was finally washed with methanol to give the fifth major fraction.

Fraction four which showed one major spot and some minor spots were subject to washing using absolute n-hexane to remove some non-polar dirt or impurities. The fraction was further subjected to preparatory TLC using four plates of precoated aluminium sheets 20+20, the areas that contain the single spot were all scratched from the plates and were pooled together and labeled as compound EB (40.1 mg). EB was isolated as a white crystalline solid with the melting point range to be 141°C-145°C, which showed positive to steroids and triterpenes test of Salkowski and Liebermann-Buchard and was obtained from the chromatographic separation of n-Hexane extract. EB was subjected to spectroscopic analysis to elucidate its chemical structure. The structure of EB was analysed using 1HNMR, 13CNMR, Distortion less Enhancement polarization Transfer (DEPT).

The 13CNMR spectrum show s twenty nine signals, the chemical value of the signals ranges from 11.9 to 140.8. The signals indicated that sample EB has twenty nine carbon atoms which can either be CH3, CH2, CH or C.

The whole plant of Indigofera Arrecta were collected from Makurdi, Benue state having been properly identified at the Herberium unit of department of Biological science, A.B.U Zaria. The stem was subjected to air drying, pulverization and extraction. The crude extracts obtained were further subjected to preliminary phytochemical screening and then antimicrobial activity test. n-Hexane extract being the most active of all, was subjected to chromatographic separations where a compound named EB was obtained, which after undergoing some spectroscopic analysis revealed to be a steroid called Stigmasterol.

Indigofera Arrecta is a plant used in traditional medicine for the treatment of several diseases such as ulcer, sore treatments, epilepsy and as a chief source of blue dyes, etc. preliminary phytochemical screening revealed the presence of some secondary metabolites which are responsible for the observed antimicrobial activity seen against the tested microorganisms. So, the claim made by the local practitioners was verified to be true.

I give the greatest thanks and praise to God for his love, mercy and blessings throughout this research work. I appreciate and acknowledge the contributions made by my project supervisor Prof. G. I. Ndukwe for his fatherly and moral support, unending patience, advice, useful suggestions and supervision.

My sincere regards go to my husband Mr. Sunday Akabuogu for his financial, material and moral support. I am greatly indebted to Dr. Sani Muhammed Yahaya of Department of Pharmaceutical and Medicinal Chemistry, Faculty of Pharmaceutical Science for his assistance throughout the research. I would like to appreciate Dr. Habila for his assistance in running the NMR spectra analyses in South Africa and helping in elucidation of the structure of compound EB.

My heartfelt thanks goes to my bosom friends Queendalin, Okeh, B. Igiri of NILEST, Mr. Ochie Ochigbo, Mr. Danbata Mubarak, Mr. Nasiru, Mr. John Anya and all others who has been a source of inspiration during this research work.

I am eternally grateful to my beloved children for their love, support and prayers throughout the research work. 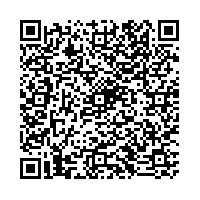