The Thermal Analysis of Felodipine and Ramipril: Application to Quality Control

Thermal behaviour of Felodipine (FEL) and Ramipril (RAM) drugs was studied in drug substance, binary mixture and co-formulated tablets. Some thermal analysis methods such as thermogravimetric analysis (TGA), derivative thermogravimetry (DrTGA), differential thermal analysis (DTA) and differential scanning calorimetry (DSC) were used to investigate the thermal behaviour of both drugs. The thermogravimetric data allowed the determination of different thermodynamic and kinetic parameters such as: Ea, ΔH, ΔS and ΔG. The drugs purity was found to be 99.88% and 99.92% for FEL and RAM, respectively. The simplicity, speed and low cost of the thermal analysis justify its application in the quality control of pharmaceutical drugs.

FIG 1: The chemical structure of FEL and RAM.

FEL and RAM are co-formulated as oral tablet which is used in several antihypertension preparations. The antihypertensive efficacy of the combination was additive and the coadministration of ramipril did not decrease the incidence of headache attributable to felodipine [2].

Up to our knowledge, the present work is the first attempt to study the thermal behaviour of FEL and RAM in binary mixture and co-formulated tablet using green method to determine their purities.

Thermogravimetric analysis (TGA, DrTGA and DTA): Shimadzu thermogravimetric analyzer DTG-60 H with TA 60 software (Tokyo-Japan) was used; aluminium oxide is used as a reference. The experiments were achieved in platinum crucible up to 850°C at a heating rate of 5°C/min in dry nitrogen atmosphere (flow rate of 30 mL/min). About 5 mg of drug was used.

Differential scanning calorimetry (DSC): Shimadzu-DSC 50 (Tokyo-Japan). The temperature ranged from 25°C to 400°C at a heating rate of 5°C/min in dry nitrogen atmosphere (flow rate of 30 mL/min). Round 5.0 mg of drug was packed in an aluminium pan. An empty aluminium pan was used as a reference. FIG 2: TGA, DrTGA and DTA curves of FEL (A) and suggested decomposition mechanism of FEL, (B) at heating rate of 5°C/min. 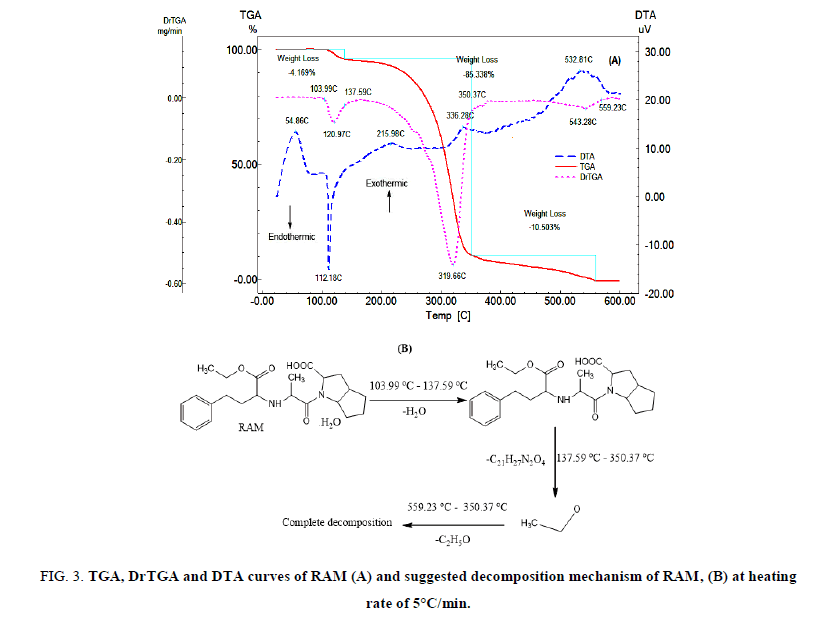 FIG 3: TGA, DrTGA and DTA curves of RAM (A) and suggested decomposition mechanism of RAM, (B) at heating rate of 5°C/min. 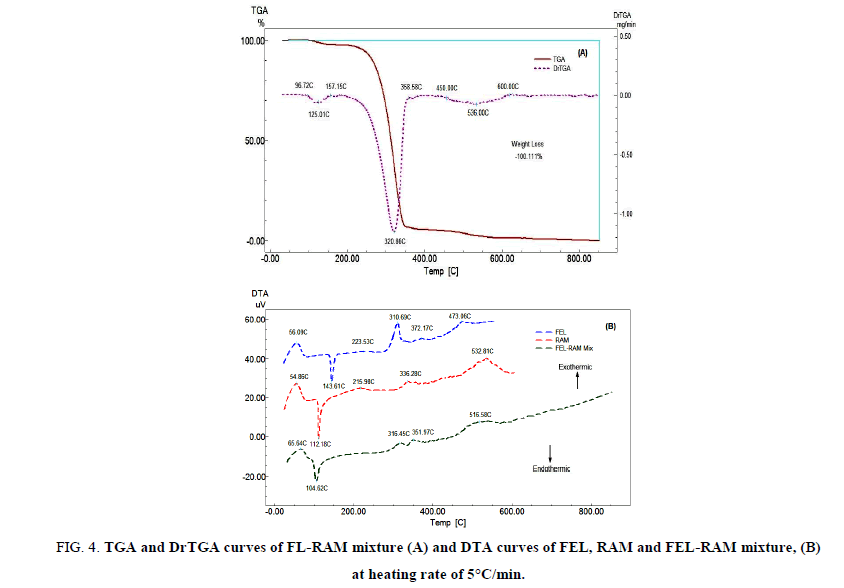 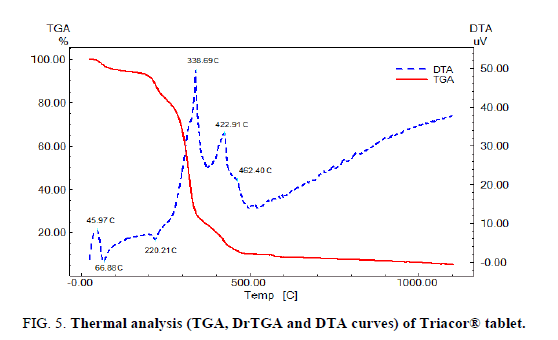 The kinetic studies of the main thermal decomposition steps of RAM and FEL were investigated using the mathematical models (1 and 2) of Horowitz-Metzger and Coats-Redfern, respectively [32,33], as shown in FIG. 6-8 . The thermodynamic and kinetic parameters such as activation energy (E), entropy (ΔS), enthalpy (ΔH) and Gibbs free energy (ΔG), as presented in TABLE 1.

FIG 6: Coats-Redfern (A) and Horowitz and Metzger (B) plots of the decomposition of FEL drug.

FIG 7: Coats-Redfern plots of first (A), second (B) and third (C) decomposition steps of RAM drug.

FIG 8: Horowitz and Metzger plots of first (A), second (B) and third (C) decomposition steps of RAM drug.

was gave a straight line and E could be calculated from the slope.

the plot of the left-hand side of equation (2) against 1/T would give a straight line. E was calculated from the slope and the Arrhenius constant (A) was obtained from the intercept. The enthalpy ΔH, entropy ΔS and free energy ΔG of activation were calculated using the following equations:

Where k and h are the Boltzman and Planck constants, respectively.

TABLE 1. Thermodynamic parameters of thermal decomposition of FEL and RAM.

FIG. 6-8 show the Coats-Redfern and Horowitz and Metzger plots of the decomposition of FEL and RAM drugs.

The DSC investigation of FEL and RAM Van’t Hoff equation: Tf =T0-[(R T02 X/ΔHf). 1/F] [34] is used to calculate the purity value of drugs, where Tf is the melting temperature of the sample, T0 is the melting point of pure substance in Kelvin (K), R is the gas constant, ΔHf is the heat of fusion, F is fraction of sample melted at Tf, and x is mole fraction of impurities in the sample.

Application of thermal analysis to quality control of FEL and RAM

*Instruments: Oven (Memmert) for loss on drying and muffle Furnace (Vulcan A-550), for ash content.

TABLE 3. Quality control parameters obtained from the thermal analysis of FEL and RAM compared with the official method.

In this work green method was studied for thermal analysis of FEL and RAM using different thermal techniques. This method was applied in binary mixture and co-formulated tablet. The melting point values obtained by DTA and DSC confirm the precision of these techniques when compared with the official methods. Therefore these techniques can be used for identification of both drugs based on their melting points. The purity values, water content and ash content of RAM and FEL are in agreement with that obtained by the official methods. Thus, the method was applied for the quality control of both drugs.

The authors would like to express their gratitude to the National Organization for Drug Control and Research (NODCAR, Egypt) for providing instruments and the means necessary to complete this work.

The authors declare no conflict of interests.