Ambient viable bacterial air pollution is now recognized as an important problem worldwide. Inhalation of bacterial aerosol can cause a number of infectious disease and hypersensitivity in the lungs. Airborne diseases are most prevalent in Asian countries where India is one among them. Seasonal bacterial aerosol study was conducted to address the ambient bacterial diversity of Bengaluru urban. Bacterial aerosol was collected by impaction onto a nutrient agar medium, using a portable Mini-patrisol Anderson Air Sampler PM10 with a frequency of about thrice in a week during all season for the year 2010, 2012, 2013 and 2014. Ambient bacterial diversity assessment study showed that bacterial aerosols crossed the tolerance limit prescribed by IRSST - Guide on respiratory protection. Pre-monsoon recorded the maximum bacterial aerosols in which dominated by genera Enterococcus, Streptococcus, Pseudomonas, and E. coli where it causes urinary tract infection, bacteremia, bacterial endocarditic, diverticulitis, and meningitis. During winter genera Corynebacterium were populated. Less number of bacterial aerosols recorded during monsoon Temperature in Bengaluru urban due to regional climate change which supported pathogenic bacteria in air.

With the acceleration of urbanization and industrialization recently, the urban population result in the increase of industrial and traffic emissions are deteriorated the air quality of Indian metro cities. Biological particles in the atmosphere, often defined as bioaerosols, are airborne particles or large molecules carrying living organisms or released from living organisms (e.g., bacteria, fungi, viruses, pollen) [1]. Bioaerosols originate from almost any environmental reservoir for microorganisms, such as fresh and marine surface waters, soil, plants, bioreactors, wastes, animals and human. Bioaerosols can contribute as much as 25% to the atmospheric aerosols [2]. Studies of airborne bacterial concentrations in different surroundings have found higher concentrations in urban areas compared to rural areas and lower concentrations at coastal sites in on-shore winds [3,4]. This is largely due to characteristics of local environments. The influence of meteorology on air quality is substantial and well established, giving rise to the expectation that changes in climate are likely to alter patterns of air pollution concentrations. Weather patterns influence the movement and dispersion of all pollutants in the atmosphere through the action of winds, vertical mixing, and rainfall. Air pollution episodes can occur with atmospheric conditions that limit both vertical and horizontal dispersion. Airborne infectious disease in Bangalore urban was increased since 1980’s [5]. Little is known about the species, concentration, and distribution of airborne bacteria in Bengaluru urban. There is, therefore, a need for such systematic and detailed surveys on airborne bacteria in different season of outdoor environments. The objective of the study to describe the group of airborne bacteria present in outdoor environment and distribution pattern in ambient air. We believe that this study may provide first kind of knowledge of airborne bacterial pollution in Bengaluru at different season.

The aerobiological study was carried out at the Department of Environmental Science, Bangalore University, Jnanabharathi campus, National Air Quality Monitoring Program station code -583, CPCB (77°30′ E and 12?50’ N) Karnataka with average Altitude of 920 m (3,018 ft). The area chosen for this investigation within fifteen kilometers from the center of the city.

Nutrient agar media (M001, HiMedia laboratories, Mumbai) was used for cultivation of a wide variety of bacterial aerosol. Suspended 28.0 g in 1000 ml distilled water and boiled to dissolve the medium completely and sterilized by autoclaving at 121°C, 15 lbs pressure for 15 min. Approximately, 10 ml of nutrient agar was cooled at 40°C and poured into sterilized petri dishes (80 × 17 mm) in aseptic condition. After solidification, all the plates were sealed with transparent adhesive tape (sellotape), refrigerated for further analysis. Similarly, selective isolation media for isolation of organisms belongs to the genus Aerococcus, staphylococcus, Streptococcus, Corynobacterium, Bacillus, Enterococcus, Pseudomonas, Neisseria, Actinomyces, Mycobacterium and E. coli species were prepared according to direction as per the manufacturer manual of HiMedia laboratory, Mumbai, India.

Air samples were collected using single stage impactor (Air petri sampling system Mark III, model No. LA474, HiMedia Laboratories Pvt. Limited, Mumbai, India) operating at about 100 L/min for 1 min, with a frequency of about twice in a week during all seasons (January to December) placing at about 1.5 m above the surface, to simulate the human breathing zone. Sampling has been carried out for all the seasons during day light hours, usually between 06.00 h and 18.00 h.

The impactor was disinfected with 99% ethanol swabs before sampling and every change of sampled plates. After sampling of fungal and bacterial aerosol, the sampled petri dishes were sealed with transparent adhesive tape (sellotape) and marked the date and time of sampling. Bacterial plates were incubated at 37°C and colonies were counted after 24 h and 48 h.

Standard plate count (viable count): Enumerations of bacterial organisms were done following APHA [6]. A viable cell is defined as a cell which is able to divide and form a population (or colony). A viable cell count was done by Digital microbial colony counter (Model DCC100, Optoprecision service, Bangalore). Chains and clumps of cells were avoided to ensure the accurate determination of total viable cells. Total numbers of viable cells are reported as colony forming units (CFUs). Estimation of microbial numbers by CFU assumes that every colony is separate and founded by a single viable microbial cell [7]. Colony forming unit (CFU) is a rough estimate of the number of viable bacterial cells in a sample. The population of bacterial aerosol in air was calculated by following formula,

Identification of bacterial aerosol: Bacterial aerosol was identified based on their colony characteristics such as colour, shape, other morphological features and by performing Gram’s staining and confirmed by carrying out characteristic Biochemical tests prescribed by following standard methods of Cowan’s and Steel [8], APHA [6], Bergey’s manual of Systematic bacteriology [9]. 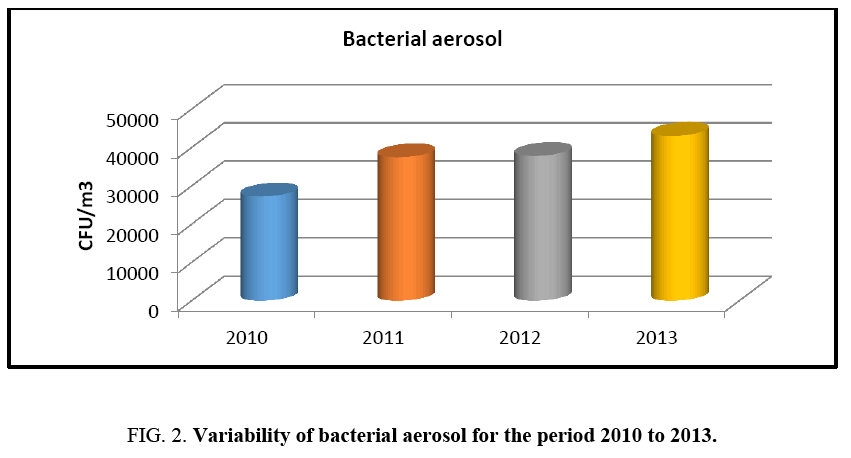 Figure 3: Dumping of garbage in open place around the Bengaluru city.

In proper waste collection at house hold level, lack of perception on solid waste management and lack of coordination of localities and Bengaluru city municipal authority resulted dumping of solid waste around the study area. Organic and inorganic waste in ventilated place around the study area might have influenced the dispersion of bioaerosol [10]. In Bangalore urban generate a great amount of municipal solid waste which is dumped on land in uncontrolled manner. Accumulation of solid waste in unscientific way leads to leachate formation that contains a large number of xenobiotic organic compounds and contaminates the air. Soil and surface and ground waters in the vicinity of the site. Pathogens found in MSW, can be viruses, bacteria, protozoa or helminths [11].

The experimental data of Bacterial aerosol for the period of 2010 to 2013 are compiled and classified season wise to reveal the variability of bacterial aerosol during different seasons of Bengaluru. The seasons are classified according to Indian Meteorological organization (IMO). The season are i. winter (December, January, and February); ii. Pre-monsoon or summer (March, April, and May); iii. Monsoon (June, July, and August); iv. Post monsoon (September, October, and November).

Pre-monsoon earned the first place in Bacterial aerosol number with an average population of 62,827 CFU/m3 (Figure 4). Maximum population of bacterial genera like Streptococcus found to be 9,895 CFU/m3, Bacillus was 6,193 CFU/m3, Staphylococcus and Escherichia coli was recorded as 5,392 CFU/m3 and 4,711 CFU/m3 during pre-monsoon season (Figure 5). 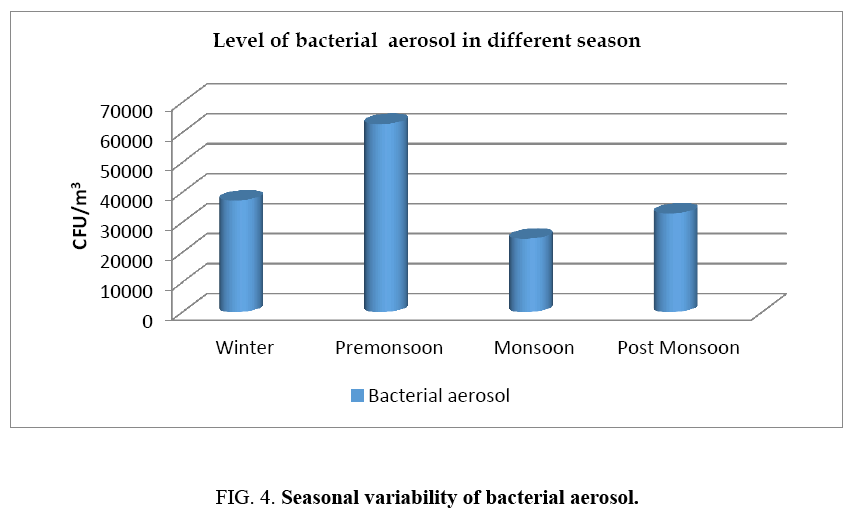 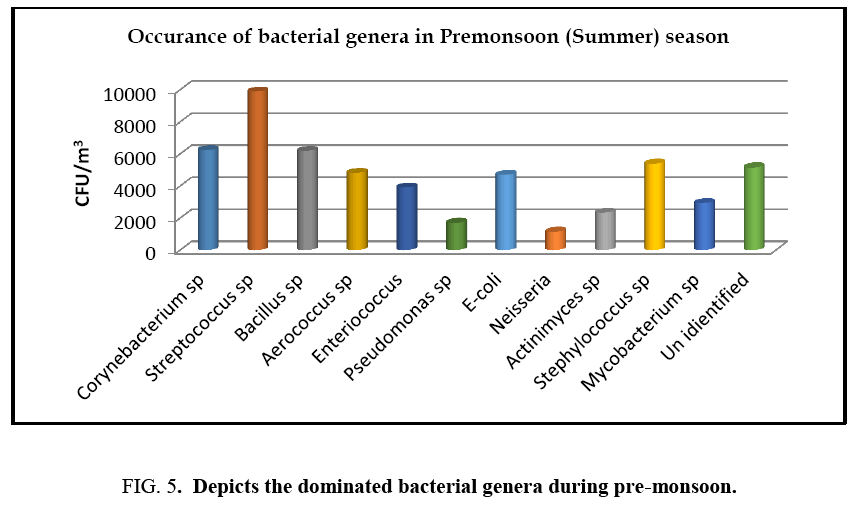 The winter season earned the second place in bacterial aerosol number with an average population of 37,276 CFU/m3 (Figure 4). Maximum population of bacterial genera like Corynebacterium, Streptococcus, Bacillus and Staphylococcus populated during winter (Figure 6). 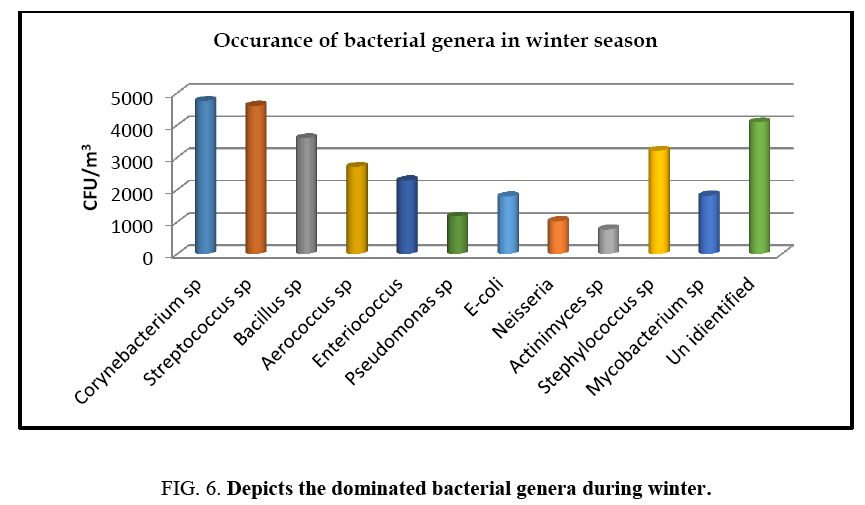 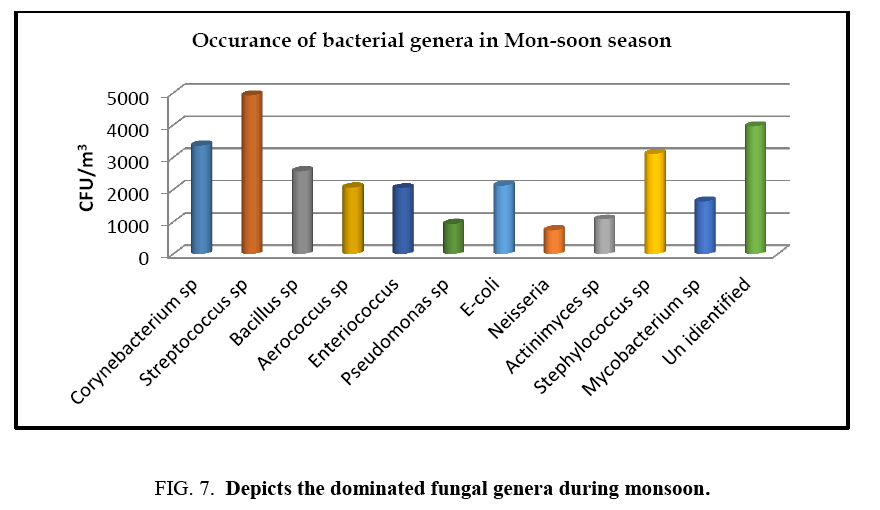 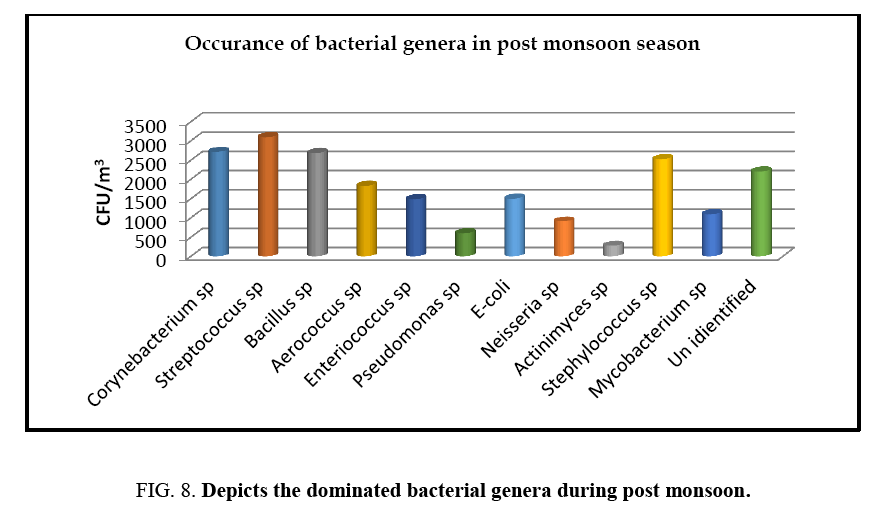 The result revealed that maximum number of bacterial aerosol were recorded during pre-monsoon (summer) season and minimum during monsoon. In pre-monsoon season, bacterial genera like Streptococcus, Bacillus, Staphylococcus and Escherichia sp., dominated. This bacterial pollution during pre-monsoon season is health risk of food poisoning and gastrointestinal disease. Staphylococci are the third most common causes of nosocomial infections and the most common causes of nosocomial bacteria. Streptococci species normally present in the human respiratory tract, they also have been implicated as the cause of infective endocarditis and life-threatening septicemias in neutropenic patients. In addition, Streptococci have been implicated as reservoirs of erythromycin-resistance genes, possibly capable of transferring resistance determinants to more pathogenic species including Streptococcus pneumonia and Streptococcus pyogenes [13]. These bacterial aerosols might have originated from contaminated soil, sewage treatment plant, open sewage drainage and unscientific garbage disposal in Bengaluru urban. Dispersion of bioaerosol at source is driven by climatic condition and geographical location.

Similar findings were recorded by Lee et al. [14] found that hot weather conditions during summer season and winter season result in environmental distinctions for dispersion of bioaerosols. Ian Colbeck and Zaheer Ahmad Nasir [15] reported in their study found that outdoor bioaerosol concentrations were more in summer than in winter seasons. Viable bioaerosol concentrations were significantly higher in summer than winter and spring. Predomination of bacterial aerosol in summer attributed by various factors like favorable temperature, nutrient availability in the atmosphere. Most of the bacteria genera were isolated in Bengaluru urban are mesophilic which grow best at 30°C to 37°C. Optimum temperature for growth of common pathogenic bacteria is 37°C. Optimum temperature during summer enhanced the survival and multiplication of bacterial aerosol in air. Similar findings were reported by Lee and Jo [16] that total number of bio-aerosols detected during summer was more than other seasons.

The declined state of bacterial aerosol may be due to frequent rainfall during monsoon. In monsoon season, bacterial genera like Streptococcus, E. coli and Enterococcus sp., dominated where it causes urinary tract infection, bacteremia, bacterial endocarditis, diverticulitis, and meningitis. Similar findings were recorded by Shah et al. [17] who states that minimum population of air microbes were observed during monsoon season compared to winter and summer seasons. This may be due to maximum settling of aerosols and soil particles on the ground. In post monsoon season bacterial genera like Streptococcus, Staphylococcus and Bacillus dominated which are allergenic to human and infects the skin.

Ambient bacterial diversity was assessed in Bengaluru urban proved that bacterial aerosols crossed the tolerance limit prescribed by IRSST - Guide on respiratory protection against bioaerosols [12]. Bacterial aerosols were dominated during summer which is health risk of infectious disease. Seasonal variation of bacterial is governed by meteorological parameters of Bengaluru urban. Temperature records for the study period showed that annual ambient temperature in Bengaluru is slightly increased due to regional climate change which supported pathogenic bacteria in air. 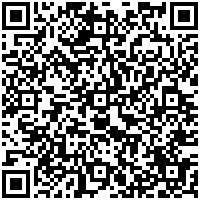