Palynology: A Minuscule Marvel for Environment and Mankind

Pollen has always been a ubiquitous and interesting subject because of their diversity in terms of shape; size and most importantly function as a pollinating agent. However, the role of pollen is not only limited to the process of pollination. Honeybees which are instrumental in the process of pollination because they not only contribute to bring about 80% of pollination process but its extract such as bee pollen is also used commercially in the field of cosmetics, health which is of great importance to mankind. Palynology which is the study of external morphological features of mature pollen grain has become an important discipline of fundamental and applied science. In the recent times pollen has proved its metal in various fields such as forensic science and criminology, paleobotany, aeropalynology etc which has effectively proved the fact that it is indeed a microscopic wonder for mankind and nature.

The word Palynology is the science of palynomorphs which is a general term given to all the entities which are present in palynological preparation for example pollens, spores, cysts etc. Pollen grain is one of the important aspects of palynomorphs (FIG. 1). The term palynology was given by Hyde and Williams in 1955. It is the combination of the Greek verb paluno (strew or sprinkle) and Greek noun logos (word or speech). Palynology not only gives us information about the pollen grains but also focuses on the taxon-specific patterns of the pollen wall their development and evolution [1]. The palynological research has given rise to various fields such as geopalynology (fossil pollen grains), aeropalynology (pollen found in atmospheric air), iotropalynology (medical aspects, criminology etc.) and melittopalynology (study of pollen in honey) (FIG. 2) [2]. Figure 1. The right word. Excerpt from Hyde and William [3]. 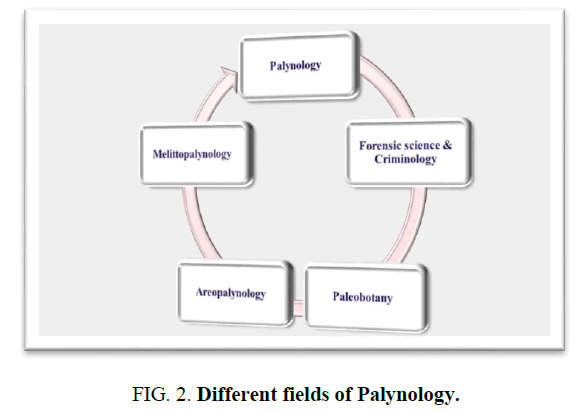 Study of pollen in honey (Apis mellifera) has become a wide area of research because of its application in health and medicine. It has been observed that young bee workers require large amount of pollens to develop secretory glands (hypo pharyngeal glands or HPG) and nutrient reserves which is important when bees performs the work of foragers and nurse . It is also stated that although pollen is not an absolute requirement by bees but they have a significant role for their survival. The bees which are deprived of pollen show difference in gene expression and poor development of HPG. It is also seen that under severe pollen deprivations, workers cannot efficiently nurture the next generation larvae due to the inability to produce the larvae jelly required [4]. All the bee pollinated flowers are brightly colored and possess fragrance and produces nectar.

Since bees are color blind for red flowers they are generally present on yellow, violet and purple flowers. Thus they are indeed instrumental in bringing about pollination [5].

Pollen in medicine and cosmetics

Bee pollen is a ball of pollen made by young bees when they land on a flower. It’s a mixture of pollen, saliva, and nectar or honey. Bees carry these balls back to the hive in sacs on their legs and store them in the hive’s honeycomb. The pollen then ferments into “bee bread” which feeds a bee colony. Beekeepers collect pollen from bees by keeping a thick comb in the entrance of their hives. When bees pass through it, it knocks the pollen off their legs into a collection bin below. The bees then must go out to collect more pollen. Bee pollen is considered so beneficial that the German Federal Board of Health recognizes it as medicine. It is considered as a superfood, as it can relieve inflammation, work as an antioxidant; boost liver health; strengthen the immune system; work as a dietary supplement; ease symptoms of menopause; reduce stress and speed up healing (FIG. 3) [7]. It is given special status in ancient Chinese medication as it act as antioxidant, anti-inflammatory, anti-carcinogenic, anti-bacterial, anti-fungicidal, anti-atherosclerotic and also regulate immune functions. Phytochemical analysis (TABLE 1) of bee pollen have shown the presence of reducing sugars, essential amino acids, nucleic acids, essential fatty acids, phospholipids, phytosterols, Flavonoids, leukotrienes, catechines, phenolic acids and vitamins in them. These compounds have shown great potential in the field of cosmetics and plays role in skin protection, skin whitening, moisturization, and anti-inflammation and anti-aging.

Flower pollen extracts, Deprox®, is the best example pf pollen in medicine. The diseases chronic prostatitis (CP) or chronic pelvic pain syndrome (CPPS) has become a major problem for urologists, as the therapeutic efficacy was not giving satisfactory results. Even the administration of the medications such as anti-inflammatories, antibiotics etc. have showed side effects which eventually reduces their benefits. So, a study was conducted using flower pollen extracts and bioflavonoids to check its efficiency. The therapeutic efficiency of flower pollen extracts (Deprox®) versus bioflavonoid was compared in number of factors such as reduction of symptoms, in the average waiting time of the variation of the National Institute of Health Chronic Prostatitis Symptom Index (NIH-CPSI), and to evaluate the quality of life improvement of the patients affected by CP/CPPS. A study was conducted among 58 patients who were diagnosed with chronic prostatitis and were given treatment with Deprox® or quercetin based on a randomization scheme previously determined. The results showcased that Deprox® significantly improved the symptoms and quality of life of the patients diagnosed with CP. Furthermore, there was a statistical difference in the average waiting time of the variation of side effects as compared to the bioflavonoids complex with quercetin. Although the study was not on a large scale but still it showed positive results [8].

It is the study, recovery and identification of plant fossils which helps to gather information about the past environments (paleogeography) and their evolutionary history of plants (FIG. 4). It has become an important field of research as it helps in restoring information about the ancient ecological system and their climate which is known as paleoecology and paleoclimatology respectively. The pollen is transferred by various pollinating agents and thus gets deposited onto the soil, lakes and bogs throughout the year. So, the vegetation cover changes eventually as the pollen deposits change. Thus, the researchers can study the vegetation changes by examining different layers where different pollens were present. In this way the climate change can also be determined by comparing the pollen grains found. For example, when a core was studied from a pond in a desert it showed pollens from pines and firs. Although the present climate of the area under study is arid but the pollen records showcases that at one time the area had a cool and moist climate which supported the growth of pines and firs but have now changed to hot and dry one [9]. Pollen plays an important role in forensic palynology. The pollen production and dispersion mechanism are important considerations in the study of forensic palynology. If the expected production and dispersal patterns of pollens of a plant in a given region are known then we can know what type of “Pollen fingerprint” is expected in the samples of that area. Thus, the pollen samples of the plant Serjania lethalis which were retrieved from victim’s stomach in Brazil helped in the providing several clues to solve the case. The country of New Zealand has made a mark in the field of Forensic palynology and accepts this type of evidence in the court of law [3].

The latter half of 20th century has seen severe increase in allergic diseases because of the changing environment and lifestyle. About 30% of the population worldwide has been affected with allergic disorders such as allergic rhinitis, asthma, atopic dermatitis etc. Although there are many bio particulates that cause allergies such as pollen grains, fungal spores, insect debris, house dust mites etc. But pollen grains and fungal spores are the most predominant allergens in air ( FIG. 5) . Pollen grains are a major cause of pollinosis so they are studied extensively. The respiratory system is directly affected by the inhalation of airborne pollen which results in causing of clinical manifestation as mentioned above. Some plants that belong to allergic taxa growing in India are Amaranthus Spinosus, Artemisia scoparia, Chenopodium album, Cynodondactylon etc [10]. The structure and use of pollen holds a long history by humans because being few micrometers it is incredible as structure which has established itself as indispensable. The scope of palynology and its applied aspects have increased with time and various centers in India such as Birbal Sahni Institute of Palaebotany, National Botanical Research Institute are doing substantial work in this field. So, with the above mentioned evidences of importance pollen in the field of vegetation, honey production, medicine, allergies as well as its magnificent contribution in the nature by the process of pollination in the absence of which whole reproduction of plant system stands still has clearly proved the point that it is indeed a microscopic wonder of flowering plants.

The author of this study is thankful to Research Institute for Fundamental Sciences, University of Tabriz, Iran for supporting of this work.