Colorimetric sensor derived from ninhydrin is presented for the selective visual detection of heavy (toxic) metals Co (II) and Cu (II). The colour complex formed is stable at a wide range of pH. The detection limit of this colourimetric sensor in water is comparatively lower and was exploited to prepare optical solid sensor. Filter paper dip sticks developed was employed as a sensor to detect the presence and to distinguish between Co (II) and Cu (II).

‘Heavy metals’ natural component of earth crust which in trace quantity are essential for many biological activities. However, presence of these above critical level poses significant environmental and occupational hazards [1]. The Heavy metal accumulation in living things can lead to heavy metal poisoning and may cause various types of acute and chronic disorders [2]. Among the essential heavy metals, cobalt (Co) and copper (Cu) represents class of essential elements required for various biochemical and physiological functions [3]. Deficiency of these may lead to a variety of deficiency diseases or syndromes [3]. Cobalt is the major constituent of vitamin B-12 [4]. However above a critical level, cobalt is toxic and lead to decreased cardiac output, thyroid enlargement, asthma and lung disease [5,6]. Copper is a constituent of several enzymes. Enzymes make use of Cu (II) oxidised state and reduced state Cu (I) in various biological redox reactions [3]. Similarly, these two oxidation states are also responsible for the generation of toxic superoxide and hydroxyl radicals in biological process [7-10]. Prolonged exposure of Cu (II) leads to irritation of nose and eyes, headache, stomachache, dizziness, diarrhea and neurodegenerative diseases [11]. Increased health concern over heavy metal contamination adds up to the studies concerning detection and subsequent removal of heavy metals. Various sophisticated instruments and methods have been developed for the detection of ions with selectivity and sensitivity [12-19]. Operational burden remains the main hurdle for extensive use. In this contest use of organic colorimetric receptors has gained considerable attention, which allows visual detection without any operational constraint [20-25].

Colorimetric sensor 1 was synthesized from ninhydrin 2. Ninhydrin 2 reacted with hydroxylamine hydrochloride 3 under an acidic condition to afford hydroxyl amine derivative of ninhydrin, indantrione-1, 2-dioxime 1 with 76% yields. Indantrione-1, 2-dioxime 1 has been recrystallized from hot methanol which melts with decomposition at 172°C. Spectral studies of these compounds are consistent with the expected product (Scheme 1) [28].

Scheme 1: Preparation of indantrione-1, 2-dioxime from ninhydrin and hydroxylamine hydrochloride.

All reagents used in this study were of reagent grade and were used as received without any purification. The melting points were recorded on Thermionic melting point apparatus. IR spectra were recorded on a Shimadzu (IR Prestige-21) FT-IR spectrometer from 4000-400 cm-1 at a resolution of 4 cm-1. UV-visible spectra were recorded using Shimaddzu UV-2450 double beam spectrometer using quartz cell. NMR spectra (1H and 13C) were recorded on an AV 400 (Bruker) TMS as the internal standard. The coupling constants (J values) are given in Hz. Elemental analysis (C, H and N) was done on an Elementar vario Micro cube CHNS analyzer Figure 2.

Ninhydrin (2.84 g, 0.0159 mmol) and hydroxylamine hydrochloride (0.0318 mmol) were dissolved in 80 mL of 0.1 N H2SO4. The reaction mixture was gently boiled on the hot plate for 15-20 minutes followed by cooling it in the ice bath Figure 3 and Figure 4. The product precipitated was filtered through Buckner funnel and washed with warm dilute acidic solution followed by repeated washing with cold water Figure 5. The products were recrystallised with hot methanol Figure 6 and Figure 7.

Figure 3: UV-visible pattern for interaction of receptor 1 with various Co2+ and Cu2+ salts. 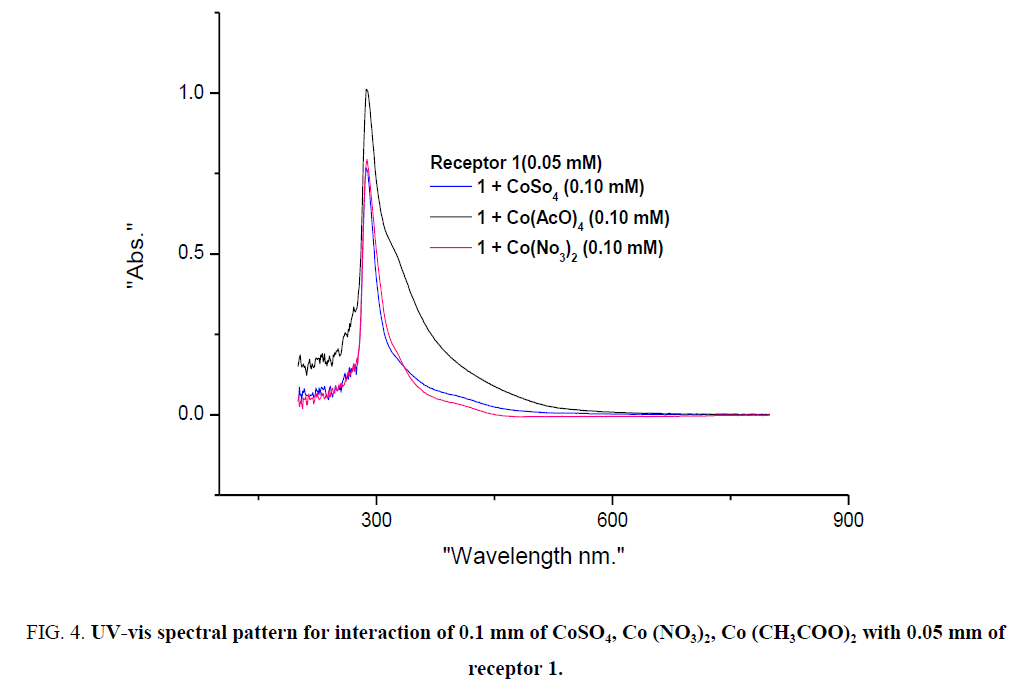 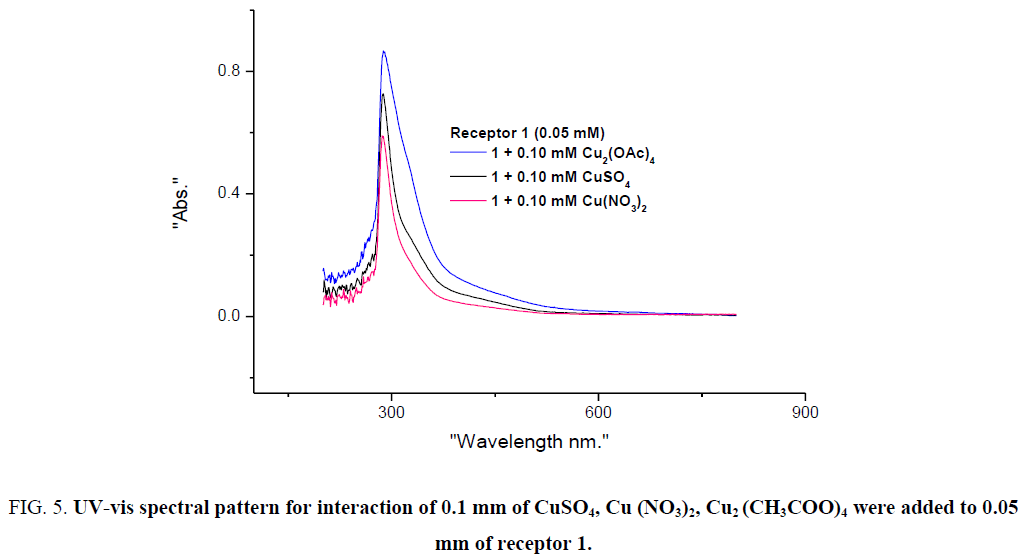 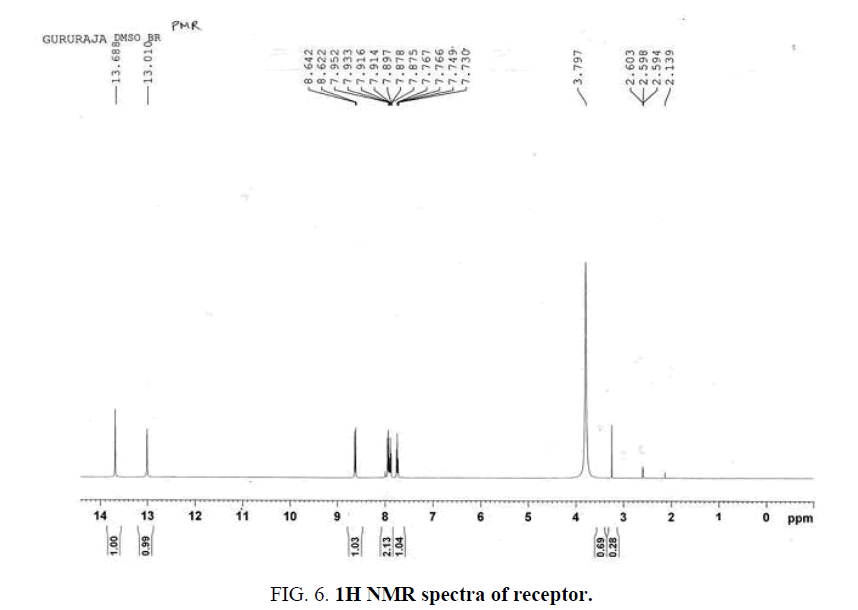 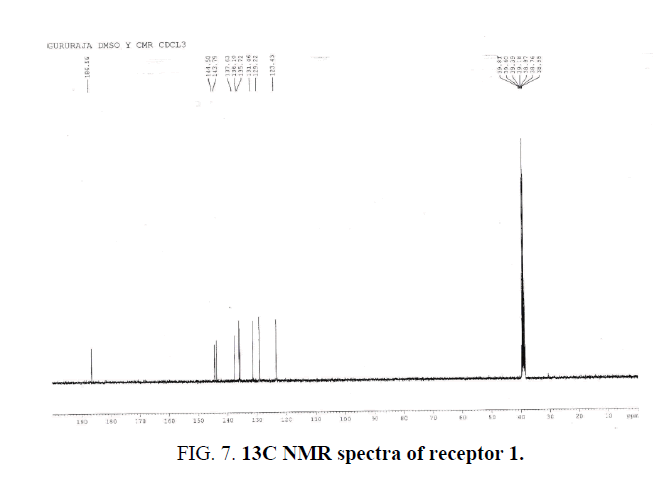 Binding properties of receptor 1 with various metal ions initially investigated with UV-visible absorption studies. Spectral properties of receptor 1 were analyzed with various solvents like ethanol, ethanol/water, methanol, methanol/water, acetonitrile, acetonitrile, acetone and as solubility is more ethanol was chosen as a solvent of choice for further screening of receptor 1. One mm solution of receptor 1 in ethanol with 2 equivalents of various above mentioned metal ions were mixed in proper proportion. Absorption pattern obtained is distinct for Co (II) and Cu (II) compared with the solution of other ions (Figure 8). Greater intensity of colour change is observed for Co (II) and Cu (II) is also reflected in UV-visible absorption studies (Figure 8a).

Figure 8: Change in UV-vis spectral pattern for the addition of 1 mm of receptor 1 to 2 mm of metal ion solutions. 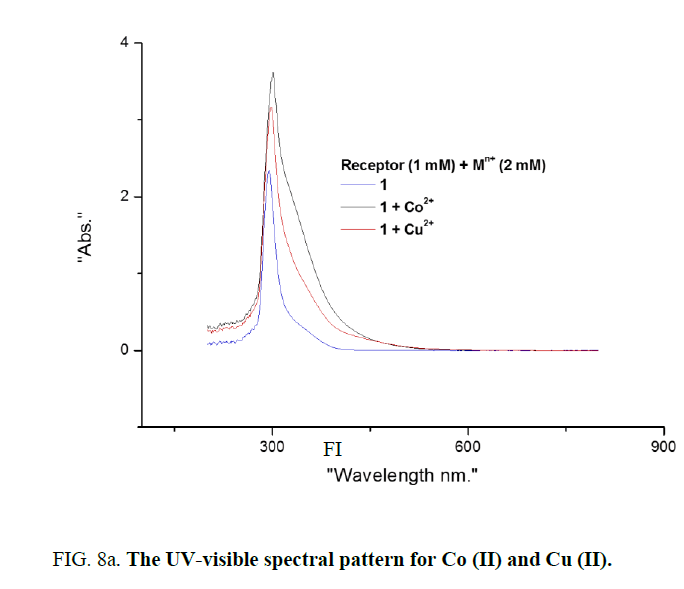 Figure 8a: The UV-visible spectral pattern for Co (II) and Cu (II).

The scope of visual detection of these metal ions with receptor 1 was further screened for different concentration of metal ions. Corresponding to 0.05 mm of receptor 1, metal ion concentration such as 0.025, 0.05, 0.1, 0.15, 0.2 mm were considered. When the CoCl2 solution was mixed in proper portion to receptor 1, detectable colour change observed corresponding to 0.15 mm of the CoCl2 solution. UV-visible spectral studies reveal an interesting trend, upon addition of 0.025 to 0.2 mm solution of CoCl2 to receptor 1, the absorbance peak at 288 nm gradually decreased and colour change from colourless to coloured was clearly observed corresponding to 0.15 mm of CoCl2 with receptor 1. The decrease in absorbance and colour change corresponding to 288 nm may be attributed to the effect of ligand-based transition [20] on complex formation (Figure 9). However when the concentration of the CuCl2 solution was varied with receptor 1, detectable colour change observed with 0.05 mm of the CuCl2 solution. Spectral studies reveal notable trend for Cu (II), upon addition of 0.025 to 0.2 mm solution of CuCl2 to receptor 1 absorbance peak at 288 nm gradually increased and detectable colour change was observed with 0.05 mm of CuCl2 and receptor 1. Increase in absorbance corresponding 289 may be attributed to π–π* transition (Figure 10). Intermolecular charge transfer (ICT) band at 530-550 nm are generally observed for Co (II) and Cu (II), however, sensitivity of the instrument used was inadequate to record such weak transition for these dilute solutions. 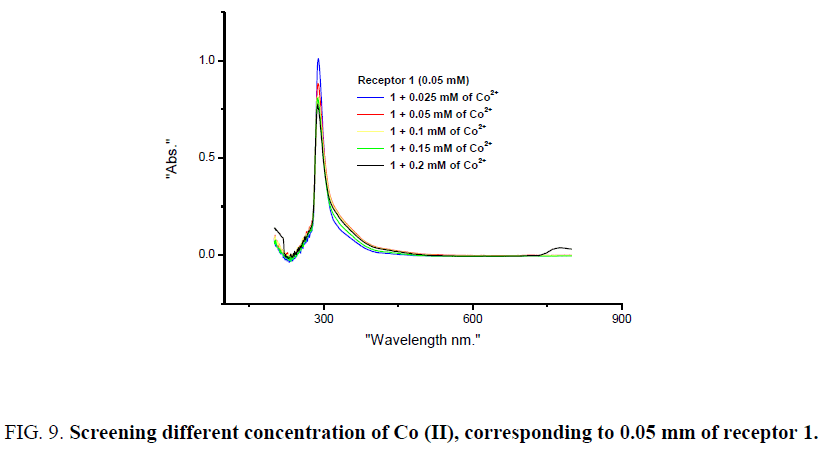 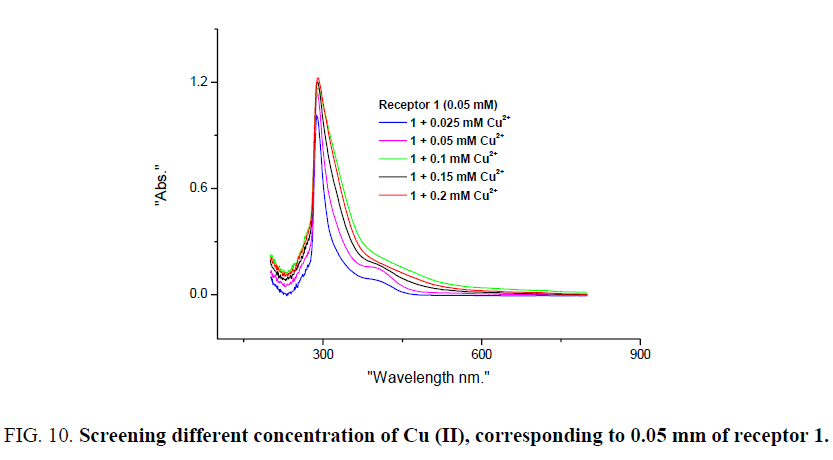 Based on visual detection and spectral screening studies detection limit is found to be 1.5 × 10-4 M Co (II) and 5 × 10-6 M for Cu (II) in an aqueous system. Further stability of the coloured solution formed due to receptor 1, CoCl2 and CuCl2 were analysed at different pH. Solutions ranging from pH 2 to 10 were analysed and colour remained stable. Receptor 1 was also considered with different anions for detection of anions in an aqueous medium, however, no noticeable colour change is observed.

Further, as a part of the application, visual recognition using organic receptor could be exploited for reliable and selective detection of Co (II) and Cu (II) in aqueous solution. Development of filter paper-based “dip-stick” appears to be an attractive technique that does not need any equipment [30]. Accordingly, filter paper-based strips similar to that of pH paper were developed. In the presence of other cations and anions, the receptor was found to be selective towards Cu (II) and Co (II) hence it can be exploited for the real-time detection of these cations. Dipsticks of this receptor were prepared by dissolving 0.1 g of the receptor 1 in 30 mL of ethanol. The above mixture is then heated to get a concentrated solution of the receptor. Whatmann filter paper of desired shape and size were dipped into this solution and air dried for several days. These dried dipsticks were ready for the visual detection of Co (II) and Cu (II). The model waste solution was prepared to contain different cations such as Cu (II), Co (II), Pb (II), Ni (II), and Fe (II) employed for the visual detection of the presence of Co (II) and Cu (II). It can be seen that these dipsticks show a detectable colour change for Co (II) rather than Cu (II) [31]. Although the change in colour is same for Co (II) and Cu (II) change in case of Co (II) seems to be more intense and distinct than Cu (II) [31].