The central premise of traditional financial theory is that investors are completely rational. In 1950s, the research field of psychology began to expand to cognitive psychology and social psychology. In this context, behavioral finance theory and experimental economics began to rise. They were based on the real psychological activities and decision-making process of the investors, and they found that the decision-making process is actually the process of risk versus return on the psychological. China's stock market development time is short, institution building is not sound. As an important part of behavioral finance theory, research on interactive relationship between investor sentiment and stock return helps improve our existing behavioral finance theory system, and further revealing the inherent relationship between the stock market investor behavior and decisions related to stock market data and stock market gains. It can provide a more abundant foundation for the research on asset price formation, and provide a useful theoretical support to control our financial markets.

The research ideas of this paper are as follows: firstly, the paper reviews the existing research on investor sentiment and stock market returns of domestic and foreign, and then introduces the data and model tools used in this paper. Then, introduce the research methods, including the ARMA model, VAR model and EGARCH model. Finally, empirical analysis is carried out to study the dynamic relationship between investor sentiment and stock market returns and the mutual influence of the two in our country.

The innovation of this paper is that the study of the impact of investor sentiment and stock return in China and abroad are mostly selected only one aspect, this paper will be more than one model for the integration of research, the content is rich and the sample data are up to date.

Recently, Zhang Wei et al. [16] examined the relations between the daily happiness sentiment extracted from Twitter and the stock market performance in 11 international stock markets. By partitioning this happiness sentiment into quintiles from the least to the happiest days, they first shown that the contemporary correlation coefficients between happiness sentiment and index return in the 4 and most-happiness subgroups were higher than that in least, 2 and 3-happiness subgroups. Secondly, the happiness sentiment can provide additional explanatory power for index return in the most-happiness subgroup. Thirdly, the daily happiness can granger-cause the changes in index return for the majority of stock markets. Fourthly, they found that the index return and the range-based volatility of the most-happiness subgroup are larger than those of other subgroups. These results highlight the important role of social media in stock market. Zhang Yongjie et al. [17] advocated the provincial TV audience rating as the novel proxy for the provincial investor sentiment (PIS) and investigate its relation with stock returns. The empirical results firstly shown that the PIS is positively related to stock returns. Secondly, they provided direct evidence on the existence of home bias in China by observing that the provincial correlation coefficient is significantly larger than the cross-provincial correlation coefficient. Finally, the PIS can explain a large proportion of provincial co movement. To sum up, all these findings support the role of the non-traditional information sources in understanding the “anomalies” in stock market.

Investor sentiment is not only an immediate reflection of the current stock market returns, but also an expectation of future market prices. According to index data sources, it is generally divided into two categories, one is through direct questionnaire survey related investors to obtain direct indicators, such as "good light index" which released by ?Dynamic analysis of stock market?; the other is indirect indicator of investor sentiment change by collecting relevant financial data from the financial markets. Direct indicators are subject to the constraints of their own circumstances, the investigation object is limited. Coverage is small and cannot guarantee its authenticity. This paper selects trading volume as measure index has two advantages: first of all, the main one of the direct performance of the investors' psychological decision-making behavior is the change of the trading volume; secondly, the trading volume as a daily data has continuity, which has obvious advantages in the study of the emotional trend of investors.

This paper selects the change of trading volume between January 2010 to December 2014 to express the investor sentiment.

The calculation formula is as follows:

This paper selects Shanghai Stock Exchange A shares index to represent the market return, the calculation formula is as follows:

Firstly, considering the mutual influence between the investor sentiment and the stock index return, this paper selects the vector auto regressive (VAR) model to analyze the dynamic relationship. The VAR model with a lag phase k of N variables is expressed as follows:

is N × 1 order random error column vector. This paper constructs the two element VAR model of investor sentiment and stock index, according to the AIC, HQIC and SBIC criterion, this paper chooses the lag period for the three orders. The results of the VAR model's stationary test are all located in the unit circle, so the VAR model is stable, which provides a basis for the following Granger causality test, impulse response function analysis and variance decomposition.

ARMA (p, q) model is the auto-regressive moving average model, and the general ARMA (p, q) can be expressed as the following form:

is the white noise process for the variance

, c is the constant term,

represents the auto regression coefficient and the moving average respectively. ARMA model can better understand the data characteristics of the investors' sentiment, and it is the basis of the study of the mutual influence of investor sentiment and stock index returns. This paper uses the system estimation method proposed by Boakes and Jenkins (Box-Jenkins, 1976) and determine the ARMA (1,1) model.

ARMA (1,1) model is used to analyze the ARCH-LM test, and it is found that there is a significant heteroscedastic in the investor sentiment series, at the same time, the non symmetry of the financial time series is considered, so this paper uses one of the asymmetric GARCH model, EGARCH model to do the further research.

The conditional variance equation of the EGARCH model is expressed as follows:

The left side of the equation is the logarithm of the conditional variance, which means that the leverage effect is exponential, so the forecast value of the conditional variance must be non-negative. The existence of the leverage effect can be tested by the hypothesis of γ<0. Compare with the GARCH model, there is no limit to this equation, and the process is more simple and flexible.

From the theory of econometrics, the false regression problem could be generated by using the non-stationary economic variables to establish the regression model, so it is necessary to conduct time series stationary test. This paper selects ADF(Augmented Dickey-Fuller) test method and results are shown in Table 2, t statistics value is less than the results of unit root test on every significance level, so it can be used to determine the sequence of investor sentiment sequence IS and the logarithm of the daily yield sequence R is a stationary time series.

Granger causality test can analyze the causal relationship between two stationary time series X and Y. Test methods are as follows: To estimate the current value of Y is the value of the degree of its own lag can be explained, and then verify that through the introduction of hysteresis value whether the sequence X can improve the degree of Y is explained. If it is, then the sequence X is the Granger reason of Y and the lag coefficient of X has a significant statistical characteristics. Granger causality test results of investor sentiment and market returns are shown in Table 3.

The impulse response function describes the impact of a VAR model endogenous variables to other endogenous variables brought and analyzes the effects when an error term changes, or the model is affected by the dynamic effects of a certain impact on the system. And the variance decomposition is to analyze the contribution of each structure impact on the internal variable, and the importance of the impact of different structures is further evaluated. 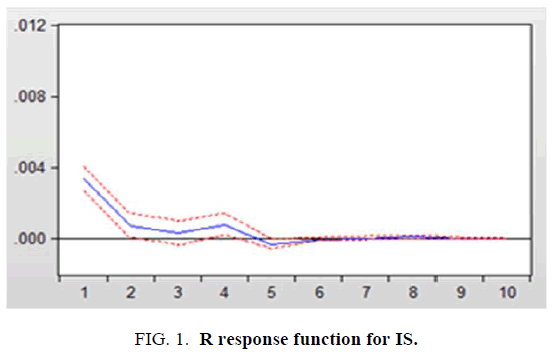 Figure 1: R response function for IS.

Figure 2 describes the response of the investor sentiment to the stock market shock. When earnings appear one percentage point positive impact, the investor sentiment in the current period did not respond, and rise to a maximum positive response rapidly after one period, indicating that the response of investor’s sentiment has lagged behind. In the third phase, a relatively weak reverse response, followed by a rapid reduction of the impact, and showing signs of convergence of the zero effect. In the analysis of variance results in Table 5, the contribution of stock index return to stability after the fifth period and the impact of the stock market's contribution rate is 8.70%. 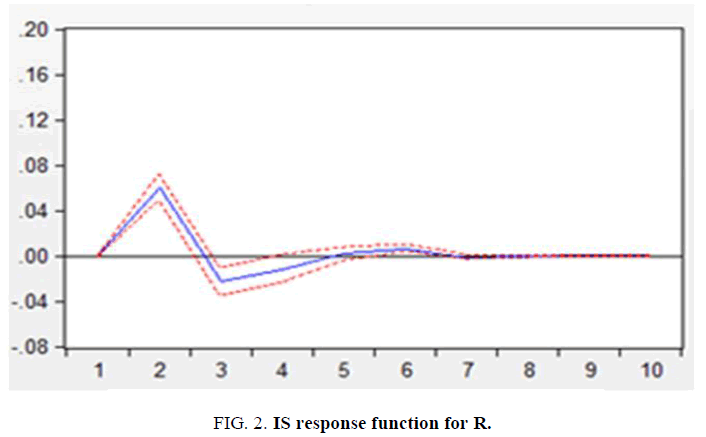 Figure 2: R response function for IS.

As can be seen by the table, the adjusted R2 has improved significantly.

In the adjusted EGARCH model, γ is significantly negative, which shows that the stock return has asymmetrical impact on investor sentiment, "bad news" can produce a greater volatility than the same amount of "good news", negative expected return on the impact of sentiment generated by investor sentiment is greater than the positive expected rate of return, it is also the performance of under-reaction and over-reaction.

The impact of investor sentiment volatility on stock return

As can be seen by the table, significant level of each statistic in the adjusted model has improved significantly, and fit statistics R2 also increased. The risk premium is significant, which shows that the change of investor sentiment has a significant positive correlation with the earnings of investors, this is the same as Wang Mei jin(2004) 's research, also shows that investors in the stock market volatility requires higher returns. 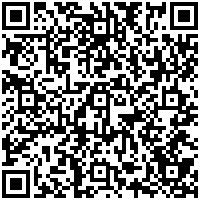