The subject of this experimental report is the application of nano particles in petroleum refinement. Sulfur removal from petroleum using mixed bed which contains nano molybdenum oxide and nano cobalt oxide, each of them in 50 volume percentage, is considered in this study. The properties related to the process characterization which is defined as X factor and pressure drop, are evaluated experimentally. The increase trend is obviously obtained however there are different curve slopes from beginning to the end. The results show the changing in diameter from 2 cm to 2.5 cm increases the value of X factor for about 0.2%, while the increase in bed diameter from 3.5 cm to 4 cm increases only 0.05%. This may relate on the poor distribution of oil in higher diameter of bed.

The challenge of fulfilling the world’s growing transportation energy needs is no longer a simple issue of producing enough liquid hydrocarbon fuels [1,2]. This challenge is instead accentuated by a complex interplay of environmental and operational issues. Environmental issues include societal demands that liquid hydrocarbon fuels be clean and less polluting [3,4]. The emergence of new refining processes and the increasing use of new forms of energy production, e.g., fuel cells, exemplify operational issues. Together, these trends are driving the need for deep desulfurization of diesel and jet fuels. In the past two decades, petroleum refining has changed extensively and the fortunes of hydro treating, in particular, have witnessed a sea change [5]. Hydro-treaters now occupy a central role in modern refineries and more than 50% of all refinery streams now pass through hydro-treaters for conversion, finishing, and pre-treatment purposes [6,7]. Hydro-desulfurization is the largest application of catalytic technology in terms of the volume of material processed. On the basis of usage volume, HDS catalysts are ranked third behind catalysts used for automobile emission control and FCC. Commercial hydro treating catalysts are, typically, Zn, Co or Mo. For example, Mo, known for its high hydrogenation activities, is preferred as a promoter when feed stocks containing high amounts of nitrogen and aromatics need to be processed. It seems, nano particles such as metal oxides can promote the heating and cooling process [8,9]. For example, the nano substances like; metal oxides can enhance the thermal stability of some of materials [10]. Today, about 90 percent of vehicular fuel needs are met by oil. Petroleum also makes up 40 percent of total energy consumption in the United States, but is responsible for only 1% of electricity generation. Petroleum's worth as a portable, dense energy source powering the vast majority of vehicles and as the base of many industrial chemicals makes it one of the world's most important commodities. Viability of the oil commodity is controlled by several key parameters, number of vehicles in the world competing for fuel, quantity of oil exported to the world market (Export Land Model), Net Energy Gain (economically useful energy provided minus energy consumed), political stability of oil exporting nations and ability to defend oil supply lines. The top three oil producing countries are Russia, Saudi Arabia and the United States. About 80 percent of the world's readily accessible reserves are located in the Middle East, with 62.5 percent coming from the Arab 5: Saudi Arabia, UAE, Iraq, Qatar and Kuwait. A large portion of the world's total oil exists as unconventional sources, such as bitumen in Canada and extra heavy oil in Venezuela.

In this work, carbon nano catalyst is applied for sweetening process of two samples of oil which contain H2S contaminant. So, the operating and geometrical parameters are evaluated in this paper. In addition, economic investigation is discussed in this study to clear more uncertain aspects. Therefore, the gained results can be interesting for related industries and can be applicable in process optimization.

All the equipment’s which contact with sour oil is made up of stain less steel preventing the corrosion problem. Sour oil feed tank is equipment with an agitator to provide homogenous feed flow and prevent sedimentation. The oil flow rate is adjusted by a valve and flow meter in line of oil movement. After passing the filter the oil flows through a pump to reach the required pressure of feed. The oil flows from the top of vessel to down through the distributor on the catalytic packed bed contains nano carbon tubes. 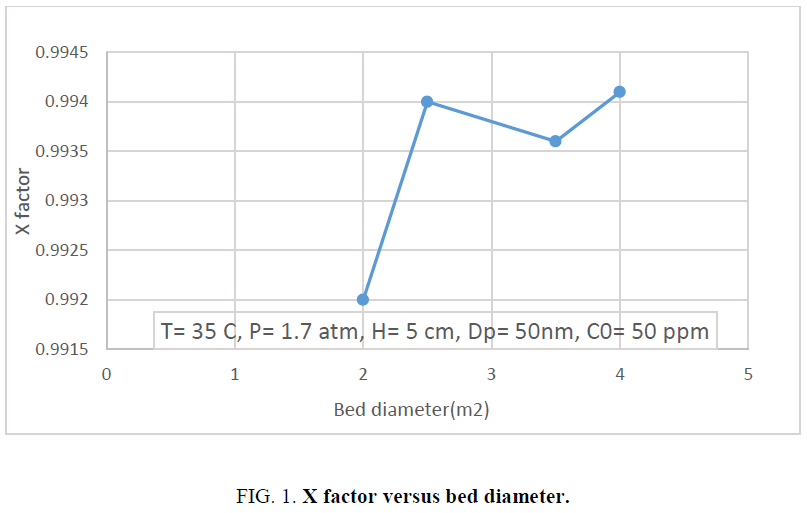 The increase in bed diameter increases the bed surface area and results the increase in the amount of X factor. Four values of bed diameter 2, 2.5, 3.5 and 4 is adjusted to evaluate the effect of bed diamter in sulfur removal from oil. The increase trend is obviusly obtained however there are different curve slopes from beginning to the end.

Also, the changing in diameter from 2 cm to 2.5 cm increases the value of X factor for a bout 0.2%, while the increase in bed diameter from 3.5 cm to 4 cm increases only 0.05%. This may relate on the poor distribution of oil in higher diameter of bed. Also, the passing velocity of oil through the catalytic bed is important on contact time and used surface area. To determine the most proper bed diameter, the cost of nano catalyst is considered and the least amount of catsalyst which results the amount of X factor close to the desired value is interested. So, this can be concluded that at the present condition and oil velocity, the bed diameter of 2.5 cm is the best.

The sulfur removal from oil stream by mixed nano catalytic bed depends on the mass transfer parameters such as liquid resistance. Since the reaction is assumed to occure on the solid surface so solid resistance in mass transfer is not considered. In this section, turbulency and liquid velocity is investigated. Changing in oil flowrate changes the value of oil velocity. The velocity of liquid indicates on turbulencey of oil and also the higher velocity causes the thinner film of liquid and decreases the distance of mass transfer. This affects the diffusion coefficient of sulfur in oil to the solid surface. Figure 2 shows the value of X factor versus oil superficial velocity. 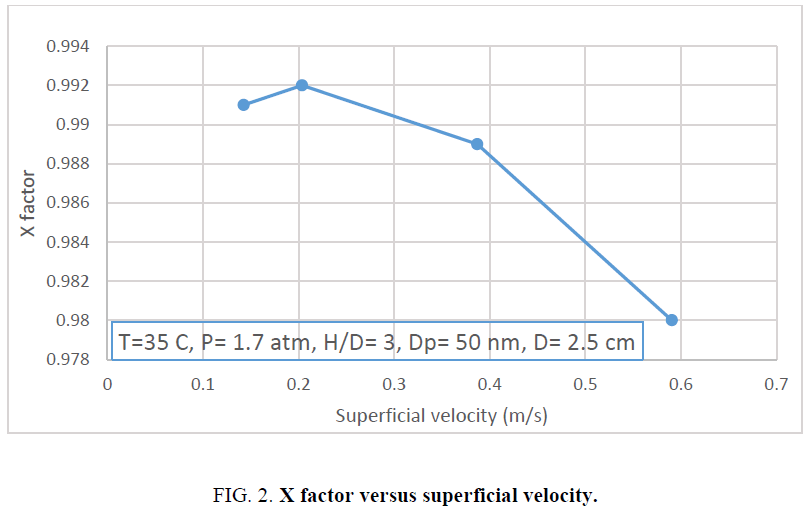 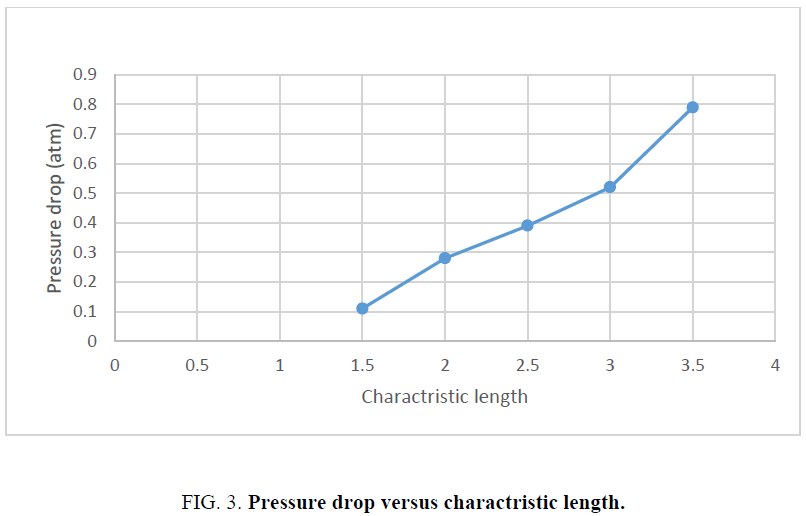 In this paper, the higher value of conversion factor, X factor, considering the cost is the purpose of the experiments. The sulfur initial concentration in value of 30, 45, 50, 55 and 65 ppm are emerged in bed and 30 ppm shows value of 0.9922 for X factor and the conversion factor decreases to 0.976, at the end. The superficial velocity of oil changes from 0.12 m/s to 0.59 m/s which increase the value of X factor from 0.991 to 0.98. The experimental data which indicates the effect of mass transfer properties on the sulfur removal by Nano catalyst presents in this work.