2Department of Financial Engineering, School of Economics and Management, Nanjing University of Science and Technology, China

3Department of Project Management, School of Economics and Management, Nanjing University of Science and Technology, China

The commercial banks play an important role in a country’s financial system. Stable and effective operation of commercial banks is closely related to the healthy development of China's economy and social stability. Bank efficiency directly affects the allocation of social resources and the utilization of financial resources. With the advent of the era of interest rate marketization; RMB internationalization and other related financial reform continues to deepen; the emergence of Internet Finance and other emerging finance, etc. China's bank industry is different from the past. How to improve the operational efficiency of banks is becoming more and more concerned, so first we should measure the efficiency of banks.

Efficiency refers to the input-output or cost-benefit comparison relationship, so is the bank efficiency. That is: under the premise of effectively ensuring the profitability, safety and liquidity of commercial banks, commercial banks can reasonably configure bank resources and maximize the flow of social and economic resources. It is the general term of the bank's market competition ability, input-output ability and sustainable development ability. Our banks can be roughly divided into: State-owned banks, joint-stock banks, city commercial banks, rural commercial banks and foreign banks. Different banks have different efficiency, and the problem is different also. For the development of bank industry, correct evaluation of bank efficiency is the foundation of effective supervision, so bank regulators could formulate targeted regulatory measures and development policies. This paper’s purpose is to evaluate bank efficiency and analyze the changes. We hoped it will be helpful to improve the efficiency of China's banks in order to overcome the problem: input redundancy or output deficiency.

DEA is a kind of objective decision-making method based on relative efficiency concept. It is based on many input-output indexes, by using the linear programming methods, a quantitative analysis method to evaluate relative effectiveness for the same type of units which is comparable.

Its principle is to maintain the decision-making unit (DMU)’s input or output unchanged, with the help of linear programming and statistical data to determine the relatively effective production frontier, each DMU is projected onto the production frontier of DEA, and their relative effectiveness is evaluated by calculating the degree of departure from the DEA frontier. 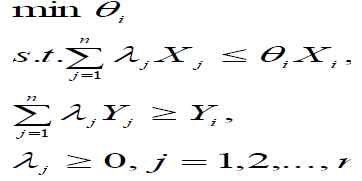 The CCR model with constant returns to scale is the most basic DEA model. The model uses the scale invariant assumption to estimate the production boundary by linear programming, and then measures the relative efficiency of each decisionmaking unit. This model obtains the TE. The model assumes that there are no decision-making units, and each unit can use a inputs to get b outputs. The input and output vectors of the i decision units are Xi=(x1i,x2i,...xai)T and Yi=(y1i,y2i,...ybi)T. The relative technical efficiency of the i decision making units can be solved by CCR model. Among them λj (j=1,2,...n) is a decision variable; θj is scalar, 0 ≤ θi ≤ 1,When the θi=1, on behalf of it is in production frontier. The closer to 1, the higher technical efficiency.

? BCC model with variable returns to scale [12]. This model assumes that the scale is variable, that is, on the basis of CCR model, add

Empirical Analysis of the Efficiency of Commercial Banks in China

Commercial bank is a financial institution for the purpose of profit which can create credit, it raises funds in a variety of financial liabilities and operates a variety of technical assets. There are three ways to divide the input-output of a bank: production method, mediation method and property method (not detailed here). The DEA method has strict restrictions on the selection of indicators, and learn from the experience of previous studies, this paper adopts the mediation method: bank is an intermediary, obtain the remaining funds by residents, and then provide to the residents in need, the bank's output is the amount of deposits and loans. We select indicators, the output indicators are: the total amount of loans (y1), the most important bank earning assets; total deposits (y2); net profit (y3), reflects the profitability of banks. The input indicators are: operating expenses (x1), reflect operating costs of banks, the net value of fixed assets (x2), on behalf of the bank hardware investment, the number of employees of banks (x3), on behalf of bank's labor input.

The national joint-stock commercial banks, the efficiency of Shanghai Pudong Development Bank’s efficiency value reached 1, DEA is valid. The Minsheng Bank, China Merchants Bank, CITIC Bank’s TE are about 0.8 or 0.9. There was an upward trend about CITIC Bank’s efficiency in recent 3 years. Minsheng Bank and China Merchants Bank had a significant downward trend. They were in the stage of decreasing returns to scale, it means there were input redundancy or output deficiency, so how to improve the efficiency of fund utilizing is the key. China Merchants Bank's TE decreased from 0.906 to 0.788, for it is characterized by retail business and service innovation, Internet finance and other emerging finance has brought great impact to the Bank.

Because the data about rural commercial banks is less, we choose Shanghai, Tianjin, Guangzhou Rural Commercial Bank. They were reformed by the credit cooperatives in China, still in adaptation period. Three banks’ TE, PTE and SE are relatively low in 2012, about 0.6, but they achieved DEA efficiency in 2013 and 2014. It was related to state's policy of increasing support for agriculture and speeding up rural finance development. In the formal financial system of agriculture, rural commercial banks are the only real financial institutions that have business dealings with farmers, so they are highly regarded.

Below we will discuss the three kinds of efficiency value for the four kinds of bank in sample, see the Figure. 1-3. 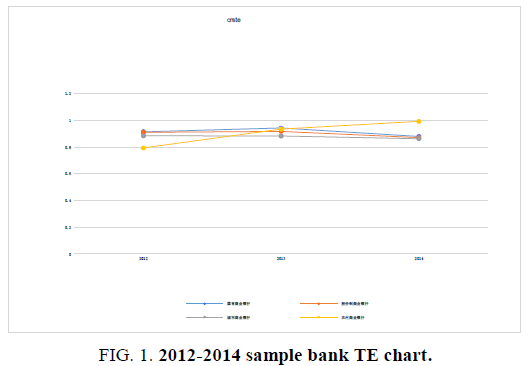 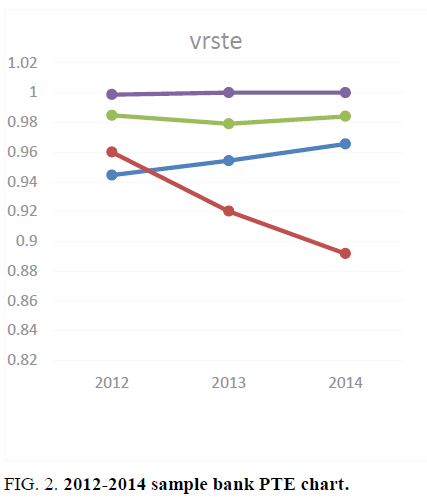 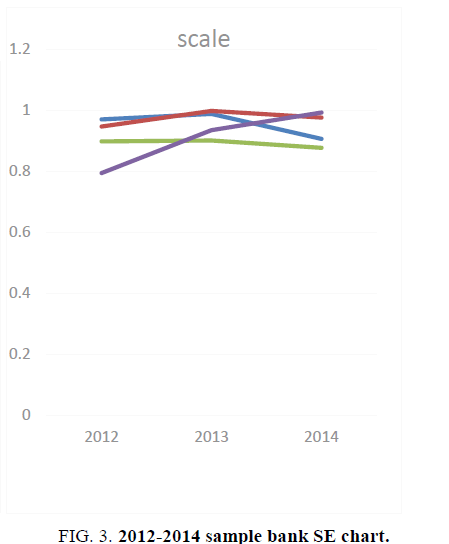 Since the 2008 economic crisis, the domestic and international environment changes greatly. 2012, China have gradually entered the new economic normal, Internet Finance emerged, financial reform intensified, etc., they brought fresh blood to banks and caused some impact at the same time. So, I choose TFP efficiency change index (2012-2014) to decompose as shown in Table 2.

From Table 2, we know the average value of M index about 15 banks during sample period was about 1.003, This shows that total factor productivity is essentially flat. From the efficiency decomposition index, the efficiency change index of rural commercial banks is more than 1, it shows that both the production technology and management level have certain promotion in 2012-2014. For other banks, the average M index of state-owned banks is less than 1, so productivity declined, it may due to the decline of scale efficiency. After the bank reached a certain scale, the scale is not economic, which restricts the development of its advantages. But it was also found that the overall PTE change index is greater than 1, so technical innovation is accelerated. Joint-stock commercial banks performed slightly worse than state-owned banks. City commercial banks’ M index is less than 1, so productivity declined. For city commercial banks, the relative backwardness of management is bottleneck which restricts total factor productivity growth, and it may have caused by backward management concept, the local government intervention, the limited network and regional services.

Compared to previous article mentioned in the literature, I joined the rural commercial banks in my study, and the time is from 2012 to 2014, more comprehensive and updated. There are some similarities and differences between my conclusion and former conclusion. The similarities: the TE of state-owned and joint-stock commercial banks are generally high, and PTE is both poor; there is a certain gap between the city commercial banks’ efficiency performance with the former. Differences: most of researches shows that state-owned banks’ scale efficiency is low, but my study shows the SE is still relatively high and had a decline in 2012-2014. I think the reason maybe that, those research are done before 2012, but in recent years, China's economic environment has changed greatly, the state-owned banks may respond positively to the national financial reform and get a small effect. Of course, it is not means the scale is not a trivial problem. At the same time, the PTE of joint-stock firms decreased obviously in my study, which may be related to the financial reform and emerging finance. And the TE gap for city commercial banks became small, it shows that city commercial banks developed steadily in 2012-2014. Finally, it is easy to find the rapid development of rural commercial banks.

In summary, the overall commercial banks in China had efficiency fluctuation in 2012-2014 base on my research, a little downward trend, because commercial banks’ operating efficiency is easily affected by external environment. For instance, the macroeconomic slowdown. But overall, banks still get good results under the increasingly complex ever-changing business environment. Of course, the problem which appeared in development cannot be ignored, in terms of these problems, we put forward the following suggestions.

The state-owned commercial banks should control scale, although their SE were relative high in my study, but the returns to scale is decreasing and the problem of excessive dot and redundant phenomenon are still serious. They can use a lot of electronic network services replace human resources and establish an effective incentive mechanism, improve the efficiency of staff and competition consciousness. Speed up the business pattern transform to intensive type, revoke or merger branches which are not economic, reduce business expenses. At the same time, continue to maintain technological innovation, optimize the structure. The joint-stock commercial banks are vulnerable in recent years due to market changes, they need to improve competitiveness. Pay attention to introduction of new technology and talents, improve management level and accelerate technological progress. They can also consider, on the basis of abundant theoretical and practical achievements of foreign commercial banks, through intermediate business innovation to accelerate the pace of financial innovation, realize comprehensive innovation about business strategy, management system, financial tools, transmission mechanism, and technology application.

Overall, the one-sided pursuit of scale is no longer the development plan of banks, efficiency and quality improvement are focus. Effectively strengthen the supervision of commercial banks is also concerned. In recent years, our economic situation is not stable for frequent global financial crisis, China bank system is in mature transition period now, we should pay more attention to financial security and improve the banks’ risk level. 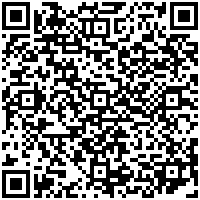