The aim of this research was to analyze the operating parameters in photocatalysis process such as initial pH, dye concentration (reactive yellow 145), irradiation time and catalyst (TiO2) loading for the degradation of reactive yellow 145 dye. The rate coefficient (k=0.0522 min-1) of degradation, follows the pseudo-first-order kinetics. Four factors three levels, Box-Behnken response surface design (BBD) was employed in RSM (Response Surface methodology), whereas multi-layer feed-forward was employed in ANN (Artificial neural network). Optimum operating conditions (97% removal) was determined in initial pH of 6, dye concentration of 0.005 M, irradiation time of 40 min and catalyst loading of 0.08 g. Also, the degradation was confirmed by UV Spectra.

Water is a basic requirement for all living beings in the world. Population increase and industrialization led to water pollution [1]. Now-a-days, most of the industrial waste was disposed in landfills [2-3]. Mismanagement of industrial as well as "hazardous" waste has resulted in polluted aquatic life [4]. A diversity of hazardous pollutants is discharged into the aquatic bodies from several industrial streams. Dye from textile industries have been a main focus of environmental remediation [5-7].

Lase few decades, color removal from the textile wastewater has become a subject of interest; because of the toxicity of the dyes [8,9]. The reactive yellow 145 dye and its intermediates with high aromaticity and low biodegradability have emerged as major environmental pollutants and nearly 10%-15% of the reactive yellow 145 dye is lost in the dyeing process. It is released in the water environment, which is an important source of environmental contamination [10]. The wastewater from textile industries, which are used reactive yellow 145 dye causes serious impact on natural water bodies and land in the surrounding area [11]. High values of COD and BOD and color leading to turbidity in the effluents [12].

Various physical, chemical and biological techniques have been developed over the last two decades to remove color from dye contaminated wastewaters [13]. Chemical and biological treatments have been conventionally followed till now, but these treatment methods have their own disadvantages. The aerobic treatment process is associated with production and disposal of large amounts of biological sludge [14]. They either transfer it to a solid which is often disposed of in landfills or must be treated in an energy-intensive regeneration process. Merely transferring toxic materials from one medium to another is not a long-term solution to the problem of hazardous waste loading on the environment [15]. Therefore, there is a critical need to develop an economic and efficient viable treatment technique for the treatment of reactive yellow 145 dye containing wastewater.

Advanced oxidation processes (AOP’s), uniting together titanium dioxide (TiO2) and high output ultraviolet technologies, in conjunction with hydrogen peroxide and catalyst are successfully used to decompose many toxic and bio-resistant organic pollutants in aqueous solution to acceptable levels, without producing additional hazardous by-products or sludge which require further handling [16-19]. TiO2/UV process is known to have many advantages such as large number of organic compounds dissolved or dispersed in water can be completely mineralized; the rate of reaction is relatively high if large surface area of the catalyst can be used. TiO2 is available at a relatively modest price and can be recycled on a technical scale. UV lamps emitting in the spectral region required to initiate the photocatalytic oxidation are well known and are produced in various sizes [20,21].

An extensive literature survey shows that, there was no research reports are available on the treatment of reactive yellow 145 dye using photocatalysis process via RSM and ANN. RSM is one of the statistical tool, which mainly used for the modeling and investigation of complex multivariable systems. ANN constitutes intelligent bionic models and the nonlinear, adaptive dynamics systems which have been widely applied to the complex process. Hence, Current study attempted to evaluate the individual and interactive effect of process variables such as initial pH, dye concentration, irradiation time and catalyst loading on the percentage degradation of reactive yellow 145 dye using RSM and ANN. Finally, UV Spectra was used to analyses the progress in photocatalytic process and kinetic studies was also investigated. This study creates the novel opportunity to know the in-depth knowledge of mechanism behind the photocatalysis process to degrade reactive yellow 145 dye. 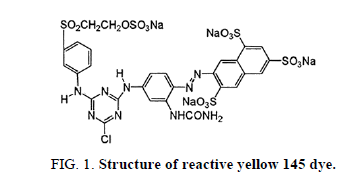 The Titanium tetra chloride is used as a starting material in this synthesis. 50 ml of Ticl4 is slowly added to 200 ml of distilled water in an ice-cold bath and the beaker was taken in to room temperature. Then, the beaker was kept in a magnetic stirrer to make a homogeneous solution for 30 min. Bath temperature was raised to 150°C and kept in the same temperature till the process of Nano particles was completed.

Schematic diagram of photocatalytic reactor was shown in Figure 2. Photocatalytic reactor was laboratory-built system consisting of UV lamp source. The intensity level of light is controlled by fixing the distance between the source of light and the specimen. The sample was added in the thermo stated photo cell using constant stirring. The suspension was constantly stirred for 30 min in the dark. During the irradiation, the photoreactor was maintained under magnetic stirring for homogeneous suspension and to promote the adsorption on the surface of TiO2. For the degradation experiments, different loading of photocatalyst (TiO2) was added to 100 ml of dye solution. Then, the suspension was subjected to irradiation under UV light. The aqueous mixture was magnetically stirred and aerated throughout the experiment. At different time intervals a liquot was taken out with the help of a syringe. Then absorption spectra were recorded at λmax=417 nm. The decolorization efficiency (%) was calculated as:

In equation (2), k is the pseudo-first-order rate constant andt, is the reaction time. Finally, A plot of ln (C0/C) versus t was recorded.

In RSM, four factors three level Box-Behnken design (BBD) was applied to investigate the individual and interactive effects of process variables including initial pH, dye concentration, irradiation time and catalyst loading on the reactive yellow 145 dye degradation. Based on the analysis of variance (ANOVA) results, mathematical model was selected. While, the multilayer feed-forward network with back propagation algorithm was used in ANN. ANN topology for photo catalysis process is shown in Figure 3. The effective modeling and predicting capacity of RSM and ANN was obtained with coefficient determination values. The R2 value was determined as follows [23]: 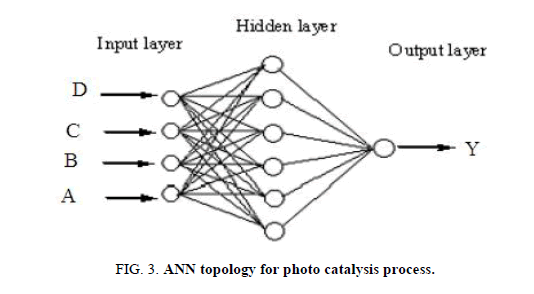 Where, Yi and Yp were actual and predicted values from RSM and ANN.

In the photocatalytic process to degrade the dye, initial pH is a crucial factor, which can influence the overall treatment efficiency. To determine the effective initial pH, experiments were done at different pH (2-9) and results are shown in graphically Figure 4.(a-c). It is shown that the greatest results are obtained in acidic solutions, best degradation results were obtained at pH 6. At high pH values the hydroxyl radicals are so rapidly scavenged that they do not have the opportunity to react with the dyes [24-25].

Further increase of dye concentration beyond 0.0075 M would increase the reactive site, which are not degraded by OH• radicals.

Experiments were carried out without and with catalyst loadings in order to determine optimal amount of photo catalyst in oxidation. The percentage of degradation of dye as a function of catalyst loading is shown in Figure 4.(d-f). As seen in the figure, the dye degradation is increased with increases in TiO2 loading up to 0.15 g. TiO2 loading beyond 0.15 g shows the reduction in dye degradation. This phenomenon may be explained that increase in catalyst concentration decreases photo absorption; which in turn reduces the dye adsorption onto the catalyst surface, thus reducing the reaction rates [28].

The four independent variables such as initial pH (A), dye concentration (B), irradiation time (C) and catalysist loading (D) were examined (Table 2) using multiple regression analysis (Table 3) on the experimental data, the model for the predicted response Y as follows: where Y is the reactive yellow 145 dye degradation.

Where, A, B, C and D are initial pH, dye concentration, irradiation time and catalyst loading, respectively. The model showed the value of the determination coefficient (R2) was 0.9483, which implied that 94.83% of the variations could be explained by the fitted model. For a good statistical model, R2 adj should be close to R2. As shown in Table 4, R2 adj was 0.94, which implied that small variations were not explained by the model. It also indicated that a high degree of correlation between the observed and predicted values. A relatively low value of C.V. (coefficient of variation) (1.25%) indicated a better reliability of the experiments values [29]. Values of p less than 0.05 showed model terms were significant. So, the F-value (F=47.12) and p-value (p=0003) implied this model was significant. Meanwhile, the adequacy of developed mathematical model was done by constructing diagnostic plots such as predicted versus actual plot (Figure 5a). 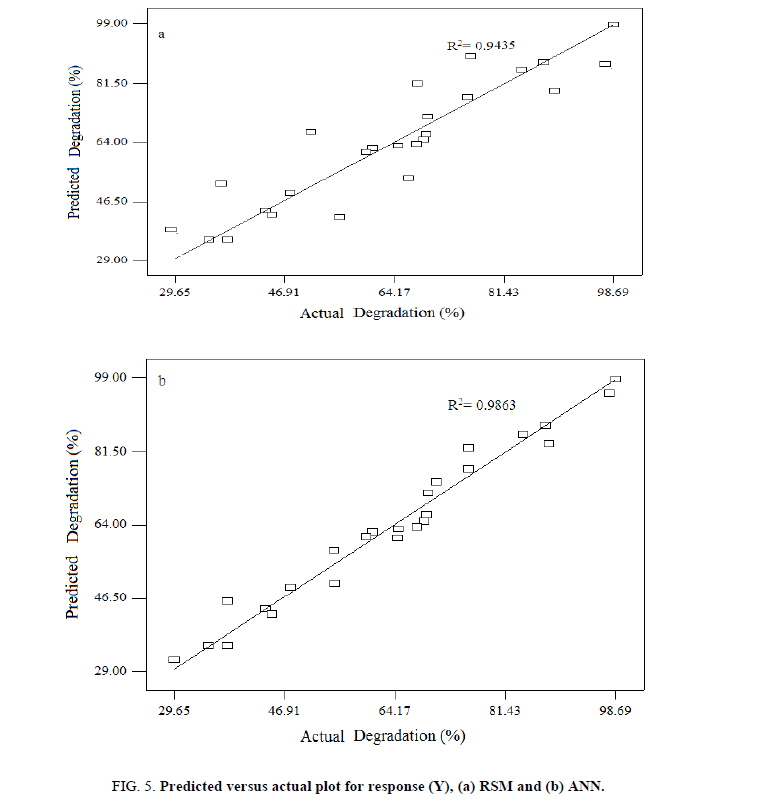 Figure 5: Predicted versus actual plot for response (Y), (a) RSM and (b) ANN.

In this ANN study, the feed-forward neural network trained by back propagation algorithm was also used. The input process parameters to feed-forward neural network were the initial pH (A), dye concentration (B), irradiation time (C) and catalyst loading (D). Optimization of ANN topology is perhaps the most important step in the development of a mathematical model to describe the photocatalytic process [30]. A series of topologies was used, in order to determine the optimum number of hidden nodes in which the number of nodes was varied range from 2 to 10. The RMSE is calculated as follows,

In order to produce the ANN outputs, the training is performed to minimize the error function (MSE). The terminology namely back propagation algorithm minimizes the MSE between the observed and the predicted response values in the output layer via two phases. Here, each topology (Feed Forward and backward) was repeated five times and three-layered feedforward back propagation neural network was employed for the modeling of the photocatalytic process to degrade the reactive yellow 145 dye [31]. Figure 5b shows a comparison between experimental reactive yellow 145 dye removal values and predicted values using the ANN model. The obtained plot is the perfect-fit Y=X (predicted data=experimental data) with the liner equation Y=0.986X+1.335, correlation coefficient (R2) 0.986 and RMSE 2.025. This high value of correlation coefficients ((R2) shows that the predicted reactive yellow 145 dye removal fit with measured reactive yellow 145 dye removal, closely. Therefore, the ANN modeling effectively simulates and predicts the influential process factors of the photocatalytic degradation. In order to find the effective mathematical modeling of photocatalytic degradation, R2 value is taken into account and it clearly stated that ANN has superior capacity compare to RSM.

The reactive yellow 145 dye degradation under photocatalytic process was analyzed UV-vis spectrum. Figure 6a shows UV-vis spectrum of reactive yellow 145 dye and the spectrum exhibits in 417 nm. According to results, reduced absorption intensity shows the ultraviolet radiation are broken the dye molecules. From the results, linear plot (Figure 6b) suggests that the photodegradation reaction follows the pseudo-first-order kinetics (k=0.0522 min-1). 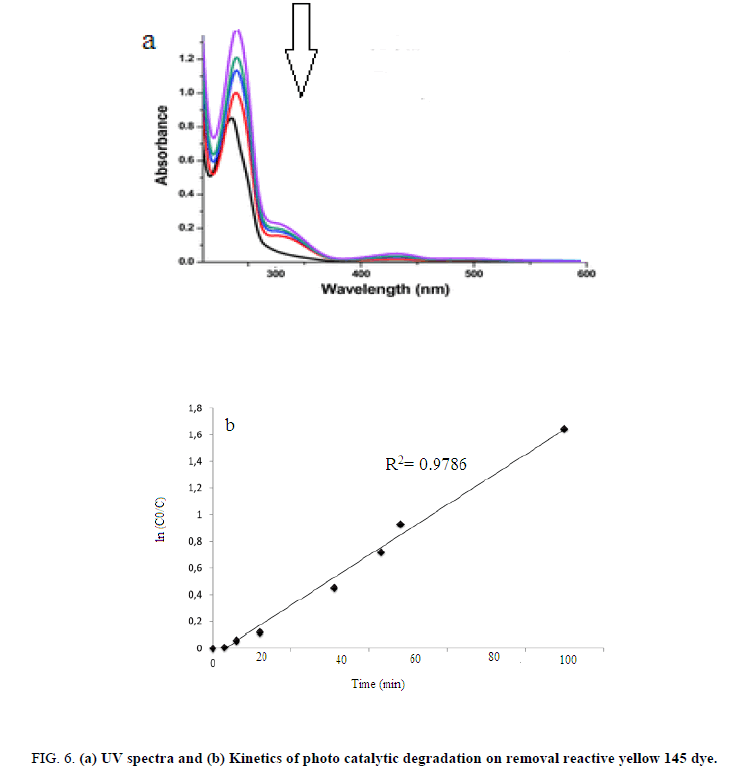 Figure 6: (a) UV spectra and (b) Kinetics of photo catalytic degradation on removal reactive yellow 145 dye.

Photo catalysis process is eco-friendly way to decrease the pollution from dye wastewater. Degradation of reactive yellow 145 dye has been carried out with variation in parameters like pH, dye concentration, irradiation time and catalyst loading under UV light. The remarks of these work clearly reveal the significance of choosing the optimum degradation parameters to attain a higher degradation, which is essential for any practical application. R2 value is taken into account for prediction of dye degradation and it clearly stated that ANN has superior capacity compare to RSM. 97% of reactive yellow 145 dye was degraded, under the optimum conditions such as initial pH of 6, dye concentration of 0.005 M, irradiation time of 40 min and catalyst loading of 0.08 g. The rate coefficient k=0.0522 min-1 of the photodegradation reaction follows the pseudo-first-order kinetics. 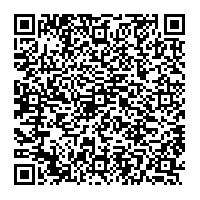