River Noyyal is major tributary of River Cauvery has been one of the most prominent and important river of Tamilnadu. Unfortunately, certain stretches of river Noyyal are much polluted in industrial and urban waste. The present study analyzed the pollution level of Noyyal River with a view to create a database on the zone-wise pollution level of the river. Samples were analyzed for a period of one year from July 2008 to June 2009 in five sampling points at Noyyal River. Totally, 23 physiochemical parameters were analyzed in five sampling locations of the river. Orathupalayam dam area recorded higher concentrations of pollutants than the permissible limits, and the lowest concentration was noted at Chadivayal. Totally six heavy metals Cr, Zn, Cd, Cu, Pb and Hg were observed in all the sampling points. Linear combinations of environmental factors, including heavy metals were subjected to Principal Component Analysis (PCA). All the physiochemical and heavy metals are observed in maximum to permissible limit. Results indicate that Noyyal river is moderately polluted under the study area.

The "Noyyal" is a sacred river in Tamil history. Its originates from the hills of Velliangiri, in Western Ghats of Tamilnadu. It flows through Coimbatore, Tirupur, Erode and Karur districts in Tamilnadu. It flows over a length of 180 km covering an area of 3,510 sq. km. The boundary of the river basin is between 10° 54 ' 00" to 11° 19' 03" N and 76° 39' 30" to 77° 05' 25" E. The river supplies water to several tanks located in and around Coimbatore and Tiruppur cities. In recent times, mismanagement of surrounding areas of water bodies has resulted into unprecedented nutrient enrichment of water bodies causing eutrophication, which is manifested by raised trophic status, increased rate of sedimentation, loss of water storage capacity, lowered retention period and deteriorated water quality. The physico-chemical characteristics of any aquatic ecosystem and the nature and distribution of its biota are directly related to and influenced by each other and controlled by a multiplicity of natural regulatory mechanisms. The discharge of effluents has caused severe pollution of both the surface and ground water in the region and has also contaminated agricultural land. The effluents of dyeing and bleaching industries of Tiruppur have strong colour, large amount of suspended solids, highly fluctuating pH, temperature, and high BOD and COD [1]. Heavy metals are yet another environmental components, which can produce toxic effects when they go beyond safe levels. Some of them, such as copper, nickel, chromium, and iron are essential in very low concentrations for the survival of all forms of life. There are about fifty heavy metals that are of special concern for their toxicological importance to human health and many of them, like Zn, Cu, Ni, and Mn are also essential trace elements for living organisms. However, if these metals get accumulated at high levels, or are ingested in greater amounts than the required concentration, then they can cause serious health problems [2]. Anthropogenic activities like mining, ultimate disposal of treated and untreated waste effluents containing toxic metals as well as metal chelates from different industries [3]. Water bodies are considered the cheapest and convenient refuse disposal systems. This tendency has resulted in indiscriminate and excessive loading of waste matter into the aquatic systems, beyond their capacity of self-purification. Today, parts of the Noyyal river basin are “Industrial Wastelands”- areas subjected to degradation as a result of a large-scale discharge of industrial effluents [4]. Realizing the need for salvaging the deteriorated Noyyal river, the present study was focused to analysis the level of physico-chemical and heavy metals parameters in Noyyal river.

Objectives of this Study

Selection of five strategically located sampling stations for Noyyal river basin, namely Chadivayal, Mangalam, Anakuli, Orathupalayam dam and Noyyal village. The Noyyal river water samples were collected every month (July-2008 to June-2009) in clean polyethylene cans or glass bottles. The sediment samples were collected in clean polyethylene bags. The samples were stored in ice pail till they were transported in the laboratory and then preserved at 5°C-10°C. All the physiochemical analyses were done within 24 h of sample collection with a help of standard methods for the examination of water and waste water [5]. Samples for oxygen analysis were fixed immediately after collection, using modified Winkler’s reagents APHA [5]. The samples for COD analysis were fixed with 1ml of Conc. H2SO4 [6]. Sediment samples was taken in a Petri dish and dried overnight at 50°C, in a hot air oven. 100 g of dried sediment sample was taken, then ground and sieved through a 250-mesh screen, to produce fine grains and make a water sample for acid digestion method [7]. Water samples were filtered with Whatman 40-41 filter paper. The heavy metal contents were analysed in water and sediment samples using Atomic Absorption Spectrophotometer Varian Techtron, AA-6D. Linear combinations of environmental factors, including heavy metals were subjected to Principal Component Analysis (PCA) using a Multivariate analysis computer software PRIMER V6 [8] to understand the environmental factors which contribute to the variations between the sampling stations and to demarcate the polluted river segments. 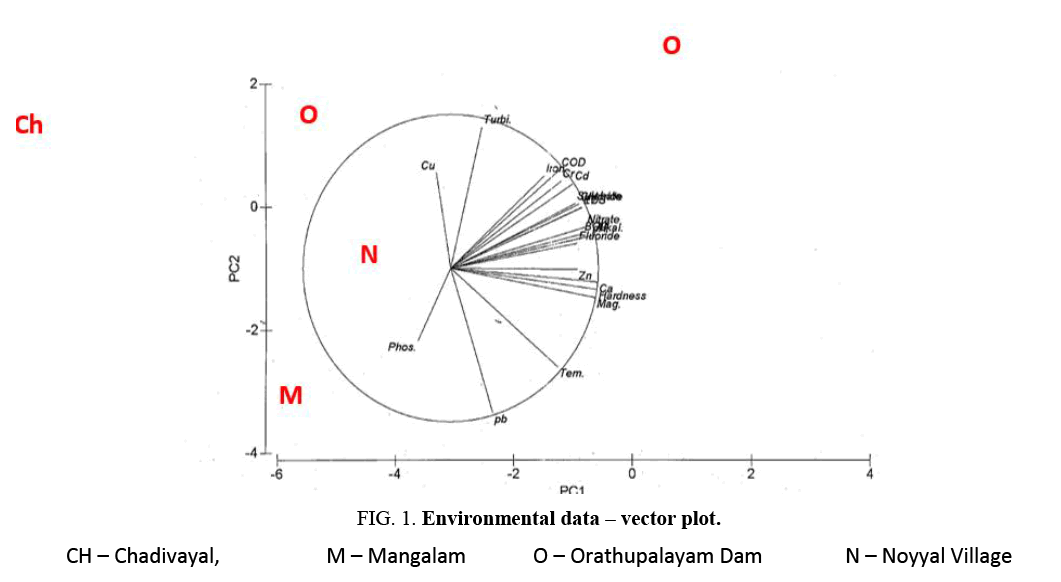 Noyyal river is subjected to inputs from urban, industrial and agricultural wastes and as a consequence, the physico-chemical characteristics of the water show a high degree of variability when compared to other rivers. The extent of water pollution is generally expressed by parameters such as pH, EC, dissolved oxygen, BOD, COD, nutrients, minerals and etc. Water in Chadivayal and Mangalam was colourless and odourless. Remaining sampling stations showed light brown colour, and the water was odorous. Industrial waste water from Tiruppur would have changed the colour and odour of river water in the Anakuli-Orathupalayam section. Noyyal exhibits high level of TDS and various salts due to industrial effluents [9] Geetha. [10] reported high values of pH, alkalinity, chloride, nitrogen, sulphate, phosphate, total hardness, magnesium and sodium in water samples collected from the ground water sources of Tiruppur and suggested the possible contamination of these sources with bleaching and dyeing wastes since most of the waste water from Tiruppur is discharged into the River Noyyal. Water turbidity is caused by suspended inorganic substances, dispersion organic substances, microorganisms etc. Low value of turbidity (1.4 NTU) was observed at Chadivayal and high turbidity (5.2 NTU) in Orathupalayam dam. Turbidity in the lower Noyyal river zones was well above the WHO permissible limits. Particularly the water samples collected from Orathupalayam dam showed high TDS value (3,814 mg/L). High value of TDS in river may cause laxative or constipation effects [11]. BOD is yet another important parameter of quality of water and it referees for the amount of used oxygen for biochemical decomposition of organic matter in water. BOD is used for the determination of the relative demand of oxygen for effluents and discard waters and is an indicator of pollution level. The values of BOD were at high level at Anakuli and Orathupalayam dam throughout the study period indicating thus the poor water quality due to the organic pollutants from industries and textile mills of Tiruppur and Coimbatore city. The maximum BOD value 23.2 mg/l was recorded in Orathupalayam dam and the minimum 0.48 mg/L observed in [12]. In the present study, COD was found to vary from 1.0 mg/l (minimum) to 47 mg/l (maximum). At Orathupalayam the BOD and COD values were found to be high all through the study period (Table 1) and were well beyond the permissible limits of WHO. These suggest that Noyyal river water is contaminated by textile industrial chemicals and municipal effluents almost all through the course of the river.

Heavy metals are considered a major cause of pollution in natural waters and have received considerable attention because of their inherent toxicity to living organisms. The heavy metals reach aquatic environment, remain suspended or partially dissolved in the water column and get accumulated in organisms. Heavy metals like Zn, Cu, Cd, Pb, Cr and Hg at different locations of Noyyal river water samples and sediment were studied. The Noyyal river water is subjected to inputs from urban and industrial wastes from Tirupur and Coimbatore cities and agricultural wastes and these might be the main reasons for the increase in heavy metal content. The untreated dye house effluents from Tirupur city could have contributed more to heavy metal contamination of water and sediments. Cr and Zn were higher in concentration in water and sediments, than the other heavy metals. The relative dominance of the heavy metals in water was observed in following sequence: Cr>Zn>Cd>Cu>Pb>Hg. [13] reports that metals, and in distinction heavy metals, have special importance in the pollution of surface waters and concentrations of some of these are beneficial, whereas some of them are harmful and toxic. Some metals such as calcium and magnesium are essential chemical elements, whereas other metals negatively influence odd consumers of water. It is confirmed that Pb, Hg and as are powerful pollutants and poisonous. Toxicity of heavy metals depends from the kind of metal, the compound, from the amount which arrives in organisms and from time-extension action of metal. In this metal group comes: Hg, Pb, Cd, Cr, Cu, Ni, As, Zn.

All the physico-chemical and heavy metals parameters in different sampling stations of river Noyyal were found in very high concentrations except Chadivayal. There results clearly indicate that River Noyyal has now turned into a huge drain bearing industrial wastes and effluents in its meandering path. The quality deterioration of water affects the crop growth and ultimately the productivity of agricultural land.

The findings of the study show that the water and sediment in Noyyal river can get contaminated with industrial waste. Results of the study also showed that considerable amounts of heavy metals are observed like cadmium, chromium, zinc, copper, mercury, lead and totally 23 physiochemical parameters were analyzed in five sampling locations of the river. The heavy metals in the water increase the potential for heavy metals to accumulate in the aquatic organisms as these pollutants enter the fish and macro invertebrates through several routes. On consumption, heavy metals enter into the food chain and cause deleterious effect to humans. The results of the present study reflect the magnitude of heavy metal pollution of River Noyyal and underscore the necessity for undertaking remediatory measures. 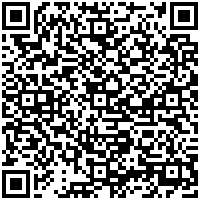