Biotechnology has tuned the research to innovate nature friendly electronic circuits. Liquid based electronic circuits are the most appropriate circuits for the same. Few researchers have started developing circuits from conducting liquid as well as from leaves. Still more concentration is required to develop nature friendly circuits because material used in circuit plays an important role in aforesaid research. In this paper, the author has successfully presented a pure biological electronic transistor amplifier circuit. A very thin diameter silicon rubber tubes, filled with conductive liquid are utilized as copper wires for the circuit. Each component of the conventional circuit has been replaced by different diameter tubes. The presented circuit has shown the desired response for certain frequencies. Presented paper claims that with proper instrumentation pure biological human implantable circuits could be possible. The presented research paper claims that if similar kind of circuits could be feasible with clinical care, it would knock the door of a novel research. Humans are suffering from different diseases due to certain habits or improper diet. Aforesaid human implantable circuits could be useful for making the body parts functioning and also to replace the damaged organ with newly invented artificial circuits.

FIG. 1 depicts the conventional transistor amplifier circuit. To convert the circuit from solid based medium to liquid-based medium, systematically approach has been applied here. In the first phase of research, the author replaced all circuit components by a liquid medium where two copper wires are inserted into a small beaker filled with synthetic plasma. The researcher recorded the desired response using cathode ray oscilloscope. Here, required Vcc and the sinusoidal input signal are applied by the power supply and function generator instruments respectively. After achieving the desired response, the author has tried to replace copper wire with implant material. To achieve aforesaid task, very thin diameter synthetic plasma filled silicon rubber tube has been utilized to work as an alternative of copper wire. Here, the primary analysis was completed where said tubes were tested for current conduction and resistance at different distances. 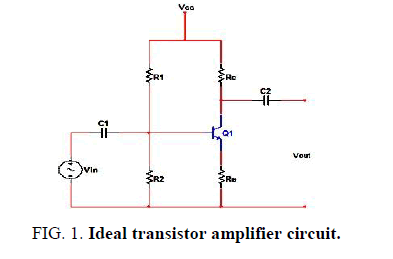 After the successful primary analysis, the author has replaced all copper wires with thin plasma filled tubes and first time ever demonstrated a pure biological liquid based electronic transistor amplifier circuit. FIG. 2 depicts an actual demonstration of the circuit. Here, the whole circuit is fixed on the wooden board. The higher diameter silicon tube is filled with synthetic plasma. As shown in FIG. 2, the author inserted small diameter tubes in the main tube and to form all electronic components and transistor terminals.FIG. 2 shows a physical model which is developed in laboratories with the latest equipment which is available and feasible. As it is the first human-made circuit so it is not an ideal one but at least its function and fundamentals can be realized. To make this kind of circuit commercialized, proper instrumentation and mechanical stuff are required to get more compactness in the circuit. FIG. 3A-B depicts the 3D view of the said circuit. Of course, it is the software generated look, but it gives a clear vision of how to be an implantable circuit should be. So at the final phase of research, anyone in the future can think about designing and commercializing the circuit. All necessary input voltages are given to excite the circuit. The results have been measured and presented in TABLE 1. It depicts absolute gain variation against the frequency variation. Here, the author, analyzed a pure biological electronic circuit using three different density liquids (1 ltr, 1.3 ltr. and 1.5 ltr.) in order to achieve the general conclusion and stabilized result.

As the author measured output in terms of absolute gain, amplification is considered if the absolute gain is above 1. This peak to peak output voltage amplification can be easily observed in the CRO screen. TABLE 1 shows that pure amplification is achieved between 14 MHz to 23 MHz. Three different types of the line representing three different density circuit behavior. Since all three lines are overlapping on each other at most of the points, it can be predicted that circuit behavior is similar for different density liquids. It supports the novel idea to develop an implantable circuit for different human blood groups. 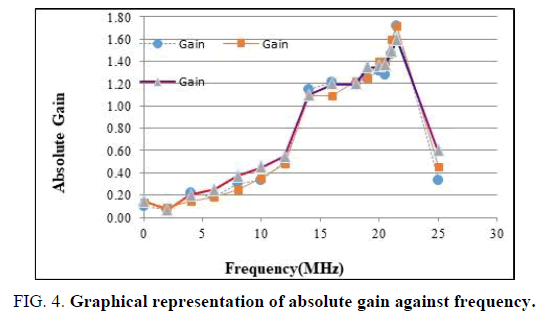 The authors successfully developed a liquid integrated circuit (IC) for the first time in history. All the necessary initiatives have been taken and results have been carried out that is presented in this section. FIG. 5 depicts the layout of the world’s first liquid IC. A novel concept of the liquid integrated circuit has been successfully demonstrated by inserting all necessary metallic wires inside the single big beaker. The author designed a mechanical wooden solid box in which numbers of holes are created so anyone could insert metallic wires inside the beaker having similar distances between them. The physical setup of liquid IC is shown in FIG. 6. 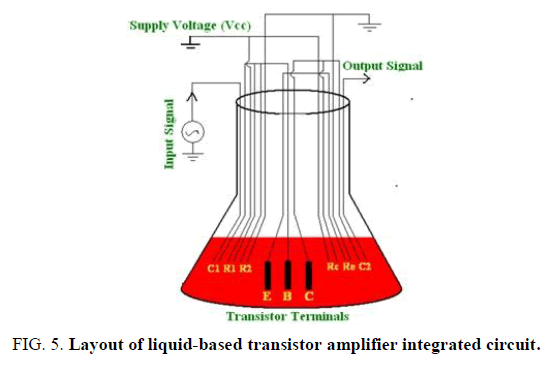 TABLE 2 shows the measured result in a tabular form. The table shows absolute gain above 1 for certain frequency range which supports the novel idea to develop liquid based electronic integrated circuit. Here also amplification can be achieved at low frequencies. The analysis of the result says that by keeping a proper distance between two probes and also between two pairs of probes, the desired response can be achieved. As described earlier, the author did all the exercise regarding mechanical instrumentation but still, it could be improved to get result enhancement. The result has been carried out immediately after inserting the copper wires into the liquid because ionization takes place because of many copper wires insertion inside a single beaker liquid. This is for the first time so only liquid-based transistor amplifier integrated circuit has been developed and presented here. The performance of the presented circuit model opens many opportunities for the researcher to develop similar kind of circuits.

FIG. 7 shows absolute gain against frequency analysis in a graphical fashion. Here as above, the absolute gain can be directly calculated from the ratio of Vout to Vin. For better understanding, all possible frequency variation has been given to excite the liquid circuit. Pure amplification could be calculated at the points we here absolute gain is above one. Keeping this in mind, it is clear from the FIG. 4 that pure amplification is achieved from 7 MHz to 11MHz. Between some range of frequencies, attenuation could be observed however it is also useful for a few electronic circuits like attenuators. Like a separate component electronic circuit, integrated circuit gives the desired response which supports the novel idea of biological liquid integrated circuit realization. 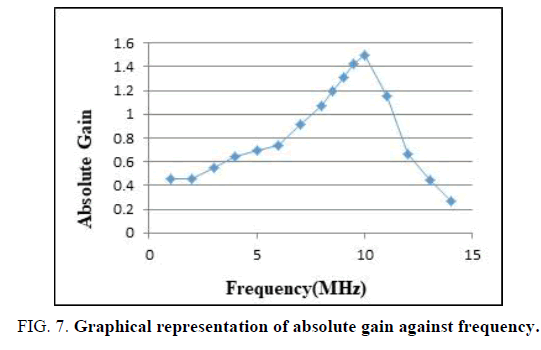 A successful designing and analysis of the pure biological liquid electronic transistor amplifier circuit have been presented here. The proposed research claims that even copper wires of liquid electronic circuits can be replaced by very thin diameter silicon rubber tubes filled with liquid conducting material-synthetic plasma. The author tested the developed circuit with three different density liquids in order to get the general solution and stability of the same. Almost similar response from different densities liquid has been achieved which indicates its feasibility and application towards the human-machine interface. If sincere attention should be paid on mechanical instrumentation of the circuit, the researcher could develop a compact human implantable circuit with proper clinical care.

The author is extremely thankful to Charotar University of Science and Technology (CHARUSAT) for direct and indirect support.