In the course of our search for tyrosinase inhibitors and antioxidants, six known bromophenol dimers were purified from methanol extract of the red alga Odonthalia corymbifera. The compounds were identified by comparison with published spectroscopic data. These bromophenols were categorized into symmetric and asymmetric dimers. Among them, the tetrabrominated dimers displayed more potent tyrosinase inhibition than the tribrominated ones. Especially, the asymmetric tetrabrominated compound showed strong inhibition. These results suggest that number of bromine substitution and orientation of bromine and phenolic hydroxy groups are important factors of tyrosinase inhibitory potency. The bromophenols were also investigated for antioxidant activities by using DPPH and ABTS radical scavenging, CUPRAC and FRAP metal reducing and copper chelation assays. All dimers showed comparable antioxidant activities to the positive controls examined. Symmetric dimers displayed relatively higher antioxidant activities than asymmetric ones.

Tyrosinase (EC 1.14.18.1), one of polyphenol oxidases, is a key enzyme for melanin biosynthesis. The enzyme mediates both hydroxylation of monophenols and oxidation of o-diphenols in the earlier steps of melanin formation related to mamalian melanogenesis, fruit browning, and prawn and crab blackening [16]. However, its excessive production is led to hyperpigmentation [17]. In addition, free radical or reactive oxygen species (ROS) may induce α-melanocyte-stimulating hormone (α-MSH) resulting abnormal pigmentation such as age spot, freckles, skin aging, melasma [18]. Many natural tyrosinase inhibitors have been reported as polyphenols and lipids [16].

Free radicals are continuously generated in human body and cause to deteriorate lipids, proteins, enzymes, DNA and RNA. They may lead to many diseases such as atherosclerosis, cardiovascular diseases and carcinogenesis [3]. Although synthetic antioxidants are commonly used to prevent these problems, their uses are critical for their toxic and carcinogenic effect [19]. Natural antioxidants without any side effects are desired to radical scavenging activity and protection against oxidative damage [20].

The marine red alga Odonthalia corymbifera (Rhodomelaceae) was collected at the coast of Hakodate city, Japan in May, 2016. The species identification was done by one of the author (H. Kurihara), supervised by Professor H. Mizuta (Faculty of Fisheries Sciences, Hokkaido University, Japan), and voucher specimen was deposited in our laboratory.

Sample solution (15 µl) was added into 50 mM sodium phosphate buffer (780 µl, pH 6.8) in test tube, followed by addition of 0.1 mg/ml L-tyrosine (0.5 ml) as substrate. Enzymatic reaction was started after adding 200 U/ml mushroom tyrosinase solution (205 µl). Reaction solution was incubated at 25°C for 30 min and absorbance was measured at 490 nm. Kojic acid was used as a positive control. The IC50 value was expressed as sample concentration which can inhibit fifty percentage of tyrosinase reaction. Kinetic study was performed as same as tyrosinase inhibition assay except reaction mixture consist of different concentrations of L-tyrosine in buffer and test sample in methanol. Lineweaver-Burk and Dixon plot analysis was used to determine inhibition type and inhibitor constant [21].

Tested sample solution (50 μl) in MeOH was added to 40 μg/ml DPPH solution (950 μl) in MeOH in a test tube and mixed vigorously. In the dark, the mixture was left for 30 min and measured absorbance at 517 nm. Catechol and BHA were used as positive control. The EC50 value was expressed as sample concentration which can quench fitty percentage of DPPH free radicals [22].

ABTS radical cation solution was prepared by adding 2.45 mM (final concentration) potassium persulfate to 7 mM ABTS in water and kept overnight in dark place. Before assay, the cation solution was diluted with ethanol to absorbance of 0.70 at 734 nm. Tested sample solution (10 μl) was added to the ABTS radical solution (1.0 ml). The mixture was left at room temperature for 10 min and absorbance was recorded at 734 nm. The EC50 value was expressed as sample concentration which can quench fifty percentage of ABTS radicals [23].

Cupric ion chelation ability was assessed according to the method of Santos et al. [26] with slight modification. Sample solution (120 μl) was mixed with 50 mM sodium acetate buffer (800 μl, pH 6.0). Then, 100 mg/l CuSO4.5H2O solution (120 μl), 2 mM pyrocatechol violet solution (34 μl) were added to reaction mixture and kept for 2 min. The mixture was shaken for 10 min and further incubated at 25°C for another 10 min. Absorbance was measured at 632 nm and EDTA-Na2 was used as positive control. The EC50 value was expressed as sample concentration which can chelate fitty percentage of Cu2+ ion [26].

Six known bromophenols 1-6 were isolated from O. corymbifera and elucidated their structures on the basis of MS and NMR data (Figure 1). They were identified with comparison of reported spectroscopic data [4,9,13,27-29]. These bromophenols divided into symmetric (1 and 2) and asymmetric dimers (3-6). The isolated bromophenols were investigated for various activities such as antioxidant and enzyme inhibition. 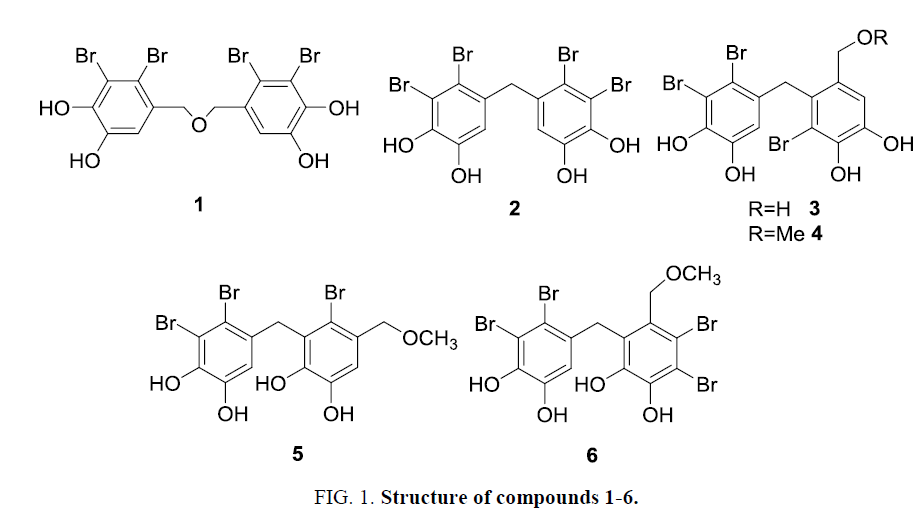 In tyrosinase inhibition assay, compound 6 showed the most potent inhibitor (IC50=1.0 µM) among the bromophenols examined and the positive control kojic acid. Other two potent inhibitors were compounds 1 and 2 with IC50 values of 5.2 µM and 11.0 µM, respectively. These compounds possess two 2, 3-dibromo-4, 5-dihydroxylbenzyl moieties in their structures. All the bromophenols 1-6 possess the catechol moiety that behaves as a copper chelator of tyrosinase [18]. However compound 6 showed weak Cu-chelating potency (Table 1) than compounds 1 and 2. Thus tyrosinase inhibition by bromophenol might be influenced by other mechanism different from Cu-chelation. Multibrominated compounds displayed higher protein tyrosine phosphatase inhibitory activity than monobrominated compounds [30,31]. Compounds 1, 2 and 6 also displayed inhibitory activity against protein tyrosine kinase and significant cytotoxicity against human cancer cell [13,32]. Thus the two 2, 3-dibromo-4, 5-dihydroxylbenzyl moieties are seemed to be important structures for tyrosinase inhibition, compared with tribrominated ones. Although the reason why the asymmetric tetrabrominated compound 6 showed strong inhibition is still unclear. These results suggest that both number of bromine substitution and orientation of bromine and phenolic hydroxy groups are important factors of tyrosinase inhibitory potency. Among the bromophenols investigated, only compound 1 was examined for kinetic analysis to be non-competitive inhibition and a Ki value of 2.4 µM. This suggests that inhibitor 1 at least may bind other site of active site and combine with either free enzyme or enzyme-substrate complex [33,34] like prenylated flavonoids as tyrosinase inhibitors [18].

Free radical scavenging, metal reducing and metal chelation assays were employed to determine antioxidant properties of naturally occurring bromophenols. All the bromophenols examined showed radical scavenging properties. Compounds 1-4 exhibited potent DPPH radical scavenging activities with EC50 values of 5.0 to 10.0 µM while 5, 6 exhibited relatively low activities with EC50 values around 20.0 µM (Table 1). Radical scavenging activity depends on hydrogen-donating ability. Many researchers [3,35,36] have reported that increasing in the number of phenolic hydroxy groups led to higher radical scavenging activity. However, in the present study, all the componds 1-6 possessed same four phenolic hydroxy group. In this way, antioxidant potency of bromophenols would be influenced not only by number of phenolic hydroxy groups but also by bromine and alkyl substitution. Compounds 4 and 5 were structural isomers, nevertheless, 4 showed two-fold stronger scavenging activities than that of 5. This difference would rely on different positions of bromine atoms and methoxymethyl group [1]. Alternatively the different activity could depend on different orientation of ortho-dihydroxy groups to methylene or ether bridge, that is, positions of dihydroxy groups to bridge are meta and para in 1-4, and ortho and meta in 5 and 6. In ABTS assay, scavenging trend showed similar patterns of DPPH assay results. CUPRAC and FRAP assays are an indication of reducing power to donate electron to transition metals with a compound [8]. Compounds 1-6 indicated relatively same reducing power compared with 2 or 3-tert-butyl-4-hydroxyanisole (BHA) and catechol as positive controls. Radical scavenging results were also supported compound reducing ability [37]. Compounds 1-3 displayed the highest reducing potentiality in the bromophenols examined due to presence of catechol moieties and structural symmetry [2,38]. In Cu2+-chelation assay, compounds 1-4 exhibited relatively high Cu2+-chelating activity similar to the activity of ethylenediamine-N, N, N’, N’-tetraacetic acid (EDTA) as a positive control. However compound5showed the weakest chelating power. Phenoliccompound with catechol moieties can bind transition metal [26]. It is unclear the reason why compound 5 showed weak chelating power. 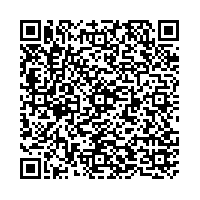