A quantum dot is a man-made solid-state structure which is able to confine one or several electrons and/or holes to a nanometer-scale potential minimum [1]. The size of a typical QD ranges from a few lattice constants to a few micrometers. Theory and modelling of the electronic structure and carrier dynamics of strain-induced quantum dot (SIQD) were discussed [2]. The lattice mismatch between the superficial CdSe stressor island and the FTO substrate induces a smooth and nearly parabolic strain deformation potential into the QW. As a result of the parabolic deformation potential, SIQD exhibit a uniquely regular and atomic-like photoluminescence spectrum. The weak potential barriers (shoulders) in the schematic band diagram of the SIQD result from the strain induced band-edge deformation. However, in a full 3D analysis including piezoelectricity these shoulders become superimposed with piezoelectric effects and partly disappear. QDs are frequently embedded in or grown on other materials with different elastic constants and lattice parameters. In such case, due to the lattice mismatch, the consequent elastic strain within the QDs is known to impact their electronic structure and hence opto-electronic properties [3]. Strain can shift the valence and conduction bands, change band gap, cause trapping of carriers and excitons, shift the oscillator strength of indirect band gap clusters [4], and in some piezoelectric materials (e.g. group III-V materials) even cause electrical fields [5]. Although the major effect is due to dilatational strain, axial and shear components can break the cubic symmetry (of most semiconductors) and lead to splitting of the light and heavy hole bands. In short, strain mediated control of electronic properties is an intensely researched subject of considerable technological importance in the context of both bulk systems and nanostructures. A wide range of approaches to assess the effect of mechanical strain on band structure is available, ranging from all-electron methods to approximate ab initio approaches like self-consistent density functional theory (DFT), empirical pseudopotential method (EPM), tight binding (TB), and envelope function method (EFM) [5].

A particularly useful feature of these materials is that the optical transitions broadened over a range comparable to the spacing between them, such that they strongly absorb light over a wide energy range. This feature, however, makes it difficult to study the origins of the broadening because individual transitions are difficult to discern. Previous work has characterized the transitions for ensembles of NCQDs of various radii.

To increase intensity of emission light and efficiency of PL spectra of transport hole or electrons layer insert between electrode and (P or N) semiconductor layer. In this paper, homogeneous and inhomogeneous broadening of optical absorption profile at room temperature of [FTO/TiO2(polystyrene)/CdSe(QDs)/PANI/EL] LEDs is investigated to show the influence of quantum confinement on absorption spectra. Using Williamson-Hall method, the effect of confinement on different layer structure is illustrated.

Preparation of CdSe (artificial atoms): Artificial atoms of CdSe were prepared by chemical solutions method. Cadmium citrate (Cd (CH3COO)2 .4H2O) was used as the cadmium source and sodium selenosulfate (Na2SeSO3) was chosen as the selenium source. Cadmium citrate (22.8 g) was dissolved in 100 ml of deionized water called solution A. Sodium selenosulfate which was prepared by dissolving 12.6 g of Na2SO3 in 100 ml of deionized water, adding selenium powder (7.96 g) to previous solution refluxed at 70°C for 3 h, red wine colored solution will appear called solution B. Solution A (20 ml) was added to 5 ml of solution B, ethylene glycol (5 ml), hydrazine hydrate (5 ml) were added previously. CdSe colloidal solution was adjusted to pH 10 by adding 1 ml NaOH solution [7]. 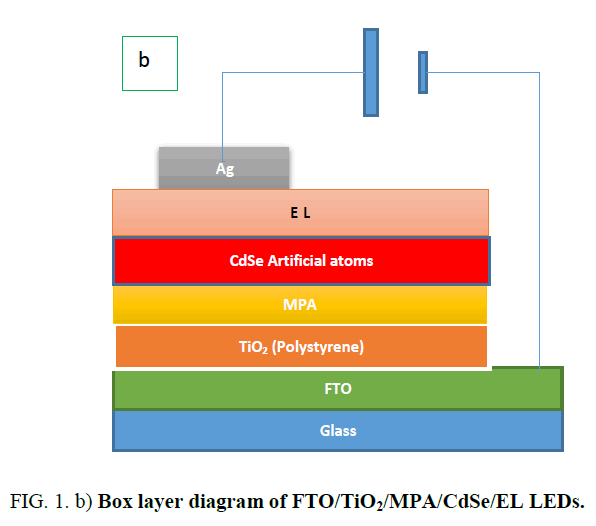 The lattice spacing, d, calculated from the Bragg’s formula [9]: 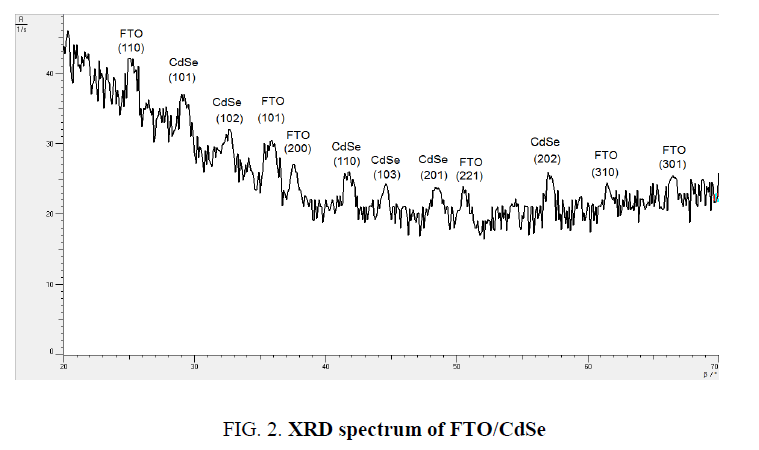 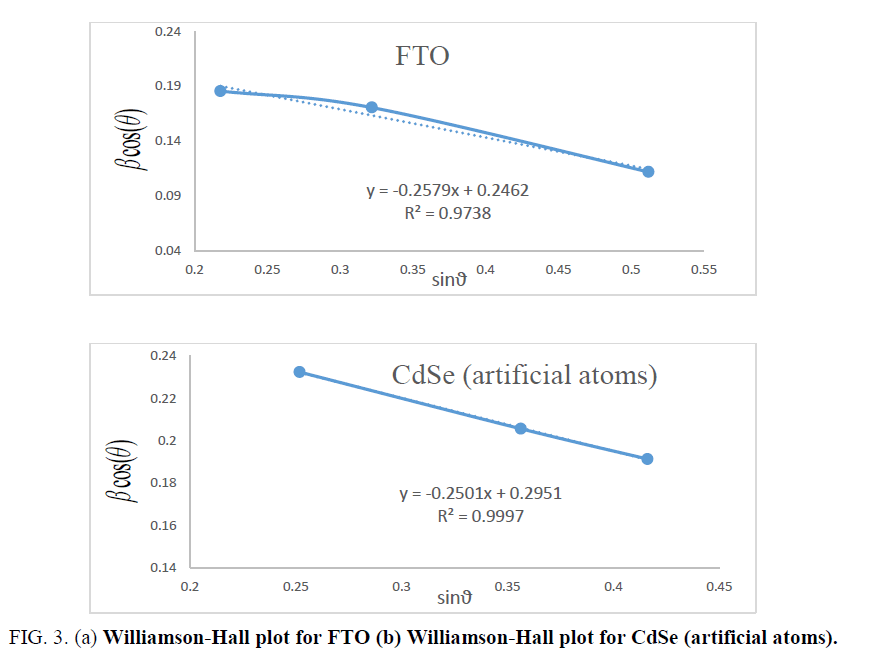 For FTO, ε1=0.00615. In materials science, a dislocation is a crystallographic defect, or irregularity, within a crystal structure. The presence of dislocations strongly influences many of the properties of materials. The dislocation density δ has been calculated by using the formula [11]:

Where h, k and l represent lattice planes (202) which corresponding with diffraction angle 2θ=56.8°. Lattice constant C is close to standard value 7.01 Å. Table 1 shows the different parameters calculated using Williamson-Hall for both CdSe artificial atoms and FTO layer. It reveals the high strain parameter of FTO and CdSe due to quantum confinement of one CdSe layer quantum confinement of CdSe artificial atoms. The depth and size of the QD carrier confinement can be tuned by changing the widths and material composition of the well and barrier layers. A phenomenological view of the electronic and optical properties of SIQD can be obtained using a simple two-band effective-mass model. A more realistic description, based on fully 3D multiband envelope wave function approximation (EFA).

(lateral confinement) [12]. Figure 4 shows schematically how the strain-induced confinement potential is created in the conduction band (a) and valence band (b) of the QW. The compressive strain, caused by the lattice mismatch between the substrate and the CdSe (MPA) QDs. QW gives rise to a uniform raising of the QW conduction and heavy-hole band-edges. The strain also gives rise to a significant splitting of the heavy and light hole bands. It is concluded that the strain greatly prefers the confinement of heavy holes to the QW. The confinement of light holes is much weaker.

Figure 4: Schematic illustration of the strain-induced band-edge deformation for (a) the conduction and (b) the valence bands.

For FTO, the lattice constant C is determined for hexagonal structure by the following expression [13]: 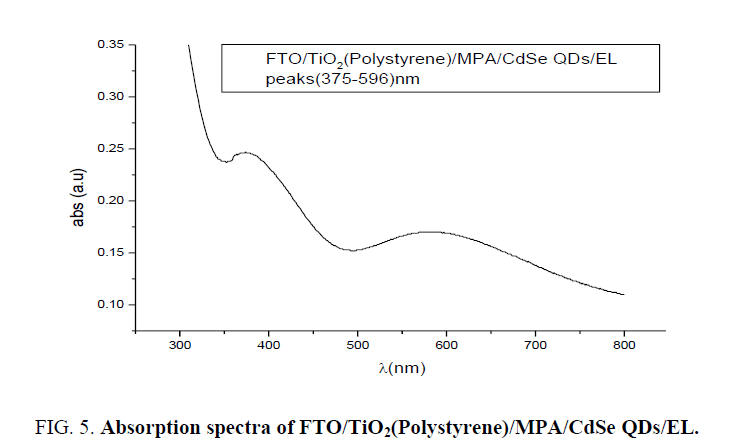 The broad absorption spectrum at 596 nm related to electronic transitions in CdSe artificial atoms the highest occupied molecular orbital (HOMO) originates from Se 4p atomic orbitals, and the lowest unoccupied molecular orbital (LUMO) from Cd 5s atomic orbitals. Those electronic states are strongly dependent on the size (the degree of confinement). Because increasing the aspect ratio only reduces confinement along the c-direction, some energy levels are sensitive to the length of the NR much more than others, and level crossing occurs. For HOMO levels, the levels consisting of a Se 4p component are more dependent on the length, by increasing the nano rods length; the energy levels converge into several energy levels. This is a transition from zero-dimension confinement (0D) to one dimensional (1D), where a continuous band forms along the c-axis. For this reason, more versatile nano electronic and optical devices, which combine the advantage of 0D and 1D confinement, can potentially be made using quantum NRs as building blocks [9], where the absorption peak at 375 nm due to direct transition for TiO2. From Figure 4 the high absorption peak at wavelength 300 nm related to FTO band-to-band transition is observed. Result of homogeneous broadening in absorption spectra was caused for several reasons; quantum confinement and multi high barriers in stature of FTO/TiO2/CdSe/EL system and different sizes of artificial atoms of CdSe.

To ensure electronic transitions in CdSe artificial atoms which is found in structure of FTO/TiO2/CdSe/EL system, theoretical energy of electronic transitions as in Figure 6. By using Gaussian profile, for all theoretical energies transitions of CdSe artificial atoms [14,15], energy band gap of FTO and energy transition of TiO2 with using experimental values from absorption spectra. When Doppler broadening is dominating, velocity distribution is dominating on line spectra. In this case, experimental line spectral given by distribution of velocity for atoms or molecular as shown [14]: 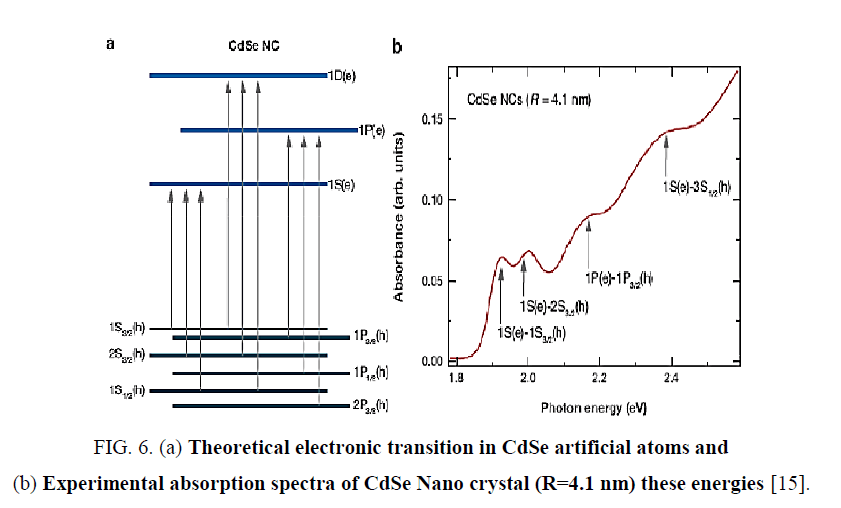 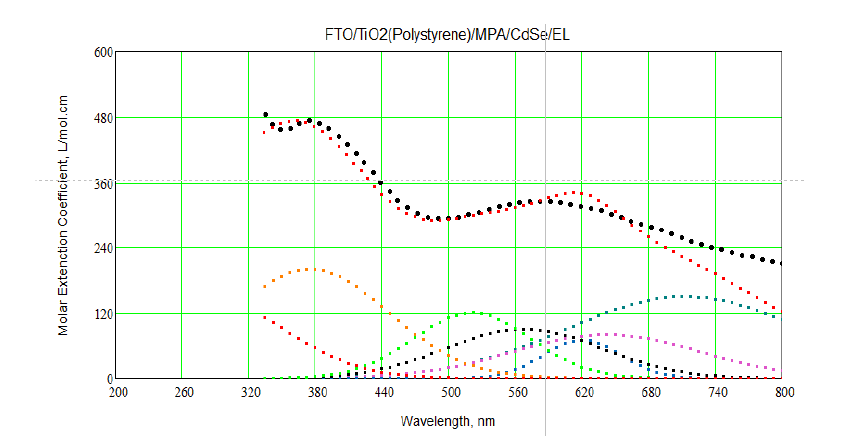 Secondly, convolution was made for these traced lines and doing a rough fit with theoretical one. Figure 7 shows the fitting between experimental and calculation absorption spectra as it clears the fitting was very well but not 100%.Figure 8 shows the 100% fitting between experimental and theoretical absorption spectra. It reveals two absorption peaks located at 365 nm. These small peaks refer to absorption from diffused layer between FTO and CdSe layer. 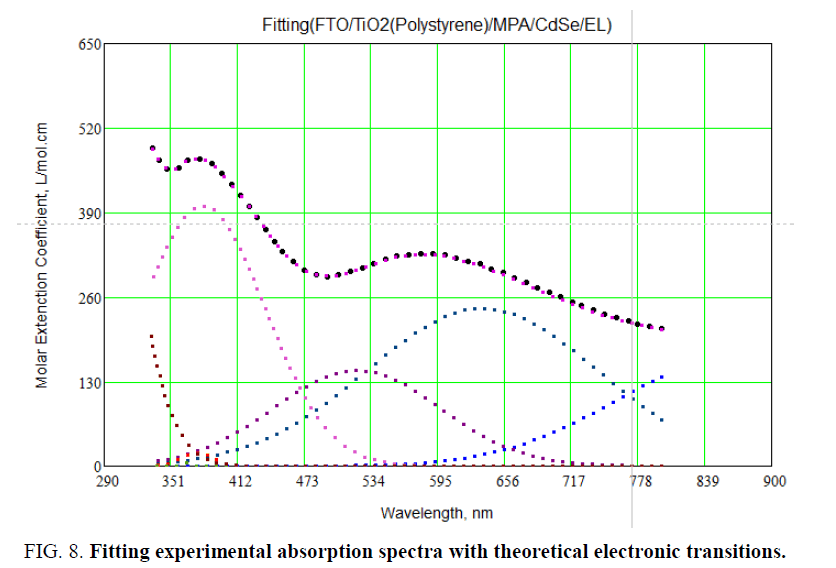 Also, it should be noted that shift in energy transition results from distribution of different size of cluster atoms broadening, confinement broadening and Doppler broadening.

Ratio of broadening, which due to size distribution and Doppler can be neglected by comparing with quantum confinement broadening.

FTO/TiO2(polystyrene)/CdSe/EL system was prepared using spin coated method. Quantum confinement effect on these structures was studied through XRD spectra using Williamson-Hall Method which produces crystallite size distribution. This more accurately separates the instrumental and sample broadening effects. It also gives average length size rather than average volume size. Broadening in absorption spectra lines reveal new electronic transitions due to diffusion layer between CdSe artificial atoms and TiO2 layers is shown in Table 3. There was energy shift between theoretical energy transitions and experimental absorption lines in CdSe artificial atom due to different effects such as quantum confinement between layers of system, different size of cluster in one layer and diffusion between layers particularly between CdSe artificial atoms and TiO2 layers.

Table 3: Theoretical electronic transitions, broadening energy transitions and difference between it in (eV).