The reaction of lamotrigine (L) with Cu2+, Co2+, Cr3+ and Fe3+ chlorides and Ni2+ and Hg2+ acetates affords new metal complexes. The isolated solid complexes were synthesized and characterized by chemical, spectral, thermal and magnetic methods. IR spectral data of the isolated complexes suggest that L acts in a monodentate manner towards the metal ions. The general formulae of the chloride and acetate complexes are [Cu2(L)2Cl4].½H2O, [Co(L)2Cl2].½EtOH, [Fe(L)2Cl3].H2O, [Cr(L)3Cl3], [Ni2(L)(Ac)4].6H2O and [Hg(L-H)Ac].5H2O, respectively. The results of electronic spectra and magnetic measurements for Cu2+ complex suggest a distorted-octahedral, tetrahedral for Ni2+ and Co2+ and octahedral structures around the Cr3+ and the Fe3+ ions. TGA data suggest the mechanism of decomposition for the metal complexes. Biological activity of the isolated metal complexes derived from lamotrigine against human tumor cell lines of the types MCF-7 and Hela normal cell line was investigated.

Lamotrigine (Figure. 1) is used for treatment of epilepsy [1-5] and bipolar disorder [5-7]. Also, it is used to treat partial, primary and secondary tonic-clonic seizures and also seizures associated with lennox-gastaut syndrome besides acting as a mood stabilizer. Moreover, it used for treating certain types of seizures. Lamotrigine may be used alone or with other medicines. It also used to delay the occurrence of mood problems in certain patients with bipolar disorder [8]. No work has been reported in the last four decades including the synthesis and characterization of the metal complexes derived from lamotrigine. One of our goals in this paper is to investigate the biological activity of the isolated metal complexes derived from lamotrigine. The antitumor activity is carried out in vitro on human mammary gland (breast) MCF-7 and cervical cancer cell-HeLa. The results suggest that Fe3+ is more promising than the rest of complexes. Hence the aim of our work is to synthesize new transition metal complexes derived from lamotrigine and characterizing the isolated complexes using chemical, spectral and magnetic measurements. Also, one of our aims is to follow the role and the importance of triazine compounds. Finally, the shortage of any information for these complexes gives us the push to throw more light on the chemistry and importance of lamotrigine complexes.

6-(2, 3-Dichlorophenyl)-1, 2, 4-triazine-3, 5-diamine (lamotrigine, L) was supplied from Delta Pharma company and used without purification. The salts used in this investigation [anhydrous FeCl3, CuCl2.2H2O, CoCl2.6H2O, CrCl3.6H2O, Ni (Ac)2.4H2O and Hg(Ac)2] were obtained from Fluka and Aldrich. Ethanol was purchased from Fisher chemicals. Lamotrigine is soluble in most organic solvents and easily soluble in DMF and DMSO.

Table 1: Chemical analyses and some physical data of the solid complexes.

Elemental analyses contents (C, H and N) were determined at the Microanalytical Unit, Cairo University. Molar conductivities measurements were carried out using Jenco-3173. The IR spectra in the 400-4000 cm-1 range were recorded in KBr using 4100 Jasco Spectrophotometer. The electronic spectra of metal complexes were recorded in DMSO in the range (200-900 nm) using UV-1601 spectrophotometer. 1H-NMR and 13C-NMR spectra of L and some of its metal complexes were recorded on Varian Gemini (200 MHz) Spectrometer in d6-DMSO. Magnetic moments were determined using a Sherwood balance at room temperature (25°C) with Hg[Co(NSC)4] as a calibrate. The diamagnetic corrections for L and the metal atoms were computed using Pascal's constants [9]. Thermal analysis measurements (TGA and DTG) were recorded on a Schimadzu model 50 instrument using 20 mg. The nitrogen flow rate and heating rates were 20 cm3/min and 10°C/min, respectively. The mass spectra were carried out on a Shimadzu of the type (GC/MS-QP5050) at the regional center for mycology and biotechnology, Al-Azhar University, Egypt. The metal contents were determined using the standard methods [10].

The chemical analyses and some physical data of the isolated solid complexes are recorded in Table 1. All the isolated metal complexes are colored, stable against light and insoluble in most common organic solvents but easily soluble in DMF and DMSO. The molar conductivities of the complexes in DMSO at 25°C lie in the range 1.5-13 Ω-1 cm2 mol-1 indicating the non-electrolyte nature [11] of the complexes. The high melting points (?300°C) of the isolated complexes suggest the stability of these compounds as indicated also from the results of TGA. 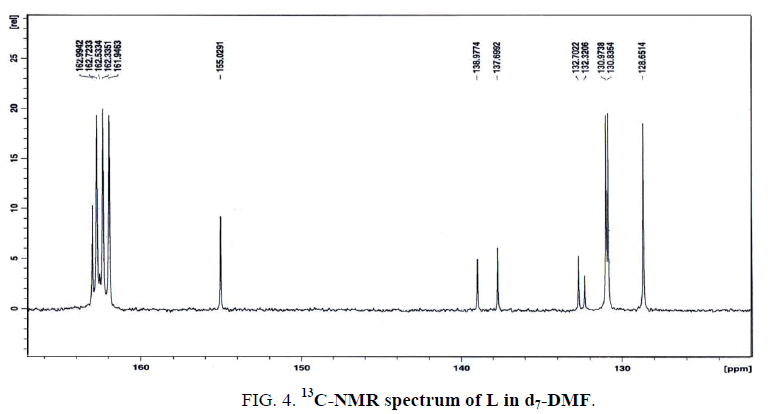 A comparison of the IR spectra of the free L with its complexes allows us to determine the mode of bonding. The IR spectra indicate that the L behaves in a monodentate manner in all metal complexes and coordinates via the NH2 group. The negative shift of the NH2 band to lower wavenumbers shows that this group is participate in coordination. Also, the other functional groups remain more or less at the same positions indicating that the other functional didn’t participate in bonding. Moreover, in comparing the IR spectra of L with its metal acetate complexes (Ni2+ and Hg2+) we observed that the difference between υas and υs of the acetate group is 199 and 212 cm-1 for Ni2+ and Hg2+ complexes, respectively indicating that this group behaves in a monodentate manner [13]. The band observed in the 410-490 cm-1 range is assigned to the υ (M-N) vibration [14].

The UV spectra of lamoterigine in DMSO shows two bands at 32850 and 38460 cm-1 attributed to n → π* transitions for C=N and N=N groups, respectively [15] as shown in Figure. 1. The spectra of all complexes were carried out in DMSO. The electronic spectrum of the Cu2+ complex, [Cu2(L)2Cl4].½H2O, shows a broad band centered at 10870 cm-1 attributed to 2T2 → 2E2transition in a tetrahedral geometry around the Cu2+ ion [15] as shown in Figure. 5. The value of magnetic moment is 1.55 BM. is taken as additional evidence for the existence of small Cu-Cu interaction.

The determination of energies of the HOMO (π-donor) and LUMO (π-acceptor) are important parameters in quantum chemical calculations. The HOMO (Highest Occupied Molecular Orbitals) is the orbital that primarily acts as an electron donor and the LUMO (Lowest Unoccupied Molecular Orbital) is the orbital that largely act as the electron acceptor. These molecular orbitals are also called the frontier molecular orbitals (FMOs) as shown in Figure. 7.

Figure 7: HOMO and LUMO of the Co2+ complex. 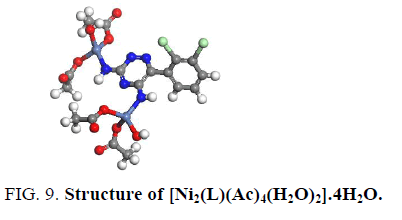 DFT method concepts can indicate the chemical reactivity and site selectivity of the molecular systems. The energies of frontier molecular orbitals (EHOMO+ELUMO) and energy band gap (EHOMO-ELUMO) explains the eventual charge transfer interaction within the molecule [21,22].

The steps of decomposition, temperature extent and decomposition products and the percentages of weight loss for the metal complexes are reported in Table 2. The results are in good agreement with the proposed structures. Also, the data suggest that the complexes are stable up to 800°C since the complexes didn’t decomposed completely to get the metal oxides and/or the nitride.

Table 2: Decomposition steps and weight loss of the metal complexes.

In vitro cytotoxicity tests were conducted utilizing five complexes derived from lamotrigine (L) against human tumor cell lines of the types MCF-7 and Hela normal cell line using a colorimetric assay (MTT assay) that is a measurement for mitochondrial dehydrogenase activity as an indication of cell viability [21,22]. The activities correspond to the viability of cancer cell growth. In parallel, the impact of widely utilized anticancer drug, 5-fluorouracil, has been also assayed as a standard. The IC50 values were estimated from the plot between the percent cell viability and concentration. The IC50 of both cell lines for the five complexes covered a large range of activity ranging from 8.2 up to 46.3 μg/ml as shown inFigure. 11(A, B, C, D, E, F). The results suggest that the five complexes monitored antitumor activity against the cell lines without damaging the normal cells. There is obviously direct correlation between strong interaction of metal ion complex with DNA and ant proliferative activity. The results reveal that [Fe(L)2Cl3H2O] and [Cr(L)3Cl3] complexes have high potential activity than [Cu2(L)2Cl4].½H2O, [Ni2(L)(Ac)4(H2O)2].4H2O and [Hg3(L)(Ac)6] complexes. The results are explained on the basis of three factors. Firstly, the ionic radii of the Cr3+ and Fe3+ ions are smaller than the other divalent ions (Cu2+, Ni2+and Hg2+) which permit the penetration of the trivalent ions (Cr3+ and Fe3+) to the membrane of the cells more than the divalent ions and coordinated to DNA. Secondly, both the Cr3+ and Fe3+complexes contain only one metal ion while the rest involve two or three ions as shown from the chemical formulae. The existence of more than one metal ion may cause a damage of the cell membrane. Finally, the stereochemistry of the metal complexes plays role on targeting cells in which the octahedral structure is more effective than the other geometries. All these observations suggest that the DNA may be the targeting molecules of the metal complexes anti-carcinogenic action and the metal complexes bind significantly enhances the drugs anticancer activity. This means that the complex is essential in designing and synthesizing novel anticancer drugs. So, it is unmistakably watched that coordination with Cr3+ and Fe3+ ions has a synergistic impact on the cytotoxicity. Also, it means that the chemical structure of compounds is very important to explain the complex biological activity and it can be essential in designing and synthesizing novel anticancer drugs.

New mono, di and tri-metallic metal complexes derived from lamotrigine (L) were synthesized and characterized by elemental analyses, conductance, spectral (IR, UV-Vis., 1H-NMR and 13C-NMR), magnetic and thermal measurements. A distorted-octahedral geometry is proposed for the Cu2+ complex, tetrahedral for Ni2+ and Co2+ and octahedral structures around the Cr3+ and the Fe3+. TGA data suggest the mechanism of decomposition for the metal complexes and indicates also the stability of these complexes at high temperature. The cytotoxic activity assay of the Cr3+ and Fe3+ complexes have the highest cytotoxic activity against human tumor cell lines of the types MCF-7 and Hela normal cell line, while other complexes showed low cytotoxic activity. The role of oxidation state of the metal ions, nature and geometry of complex is proposed. 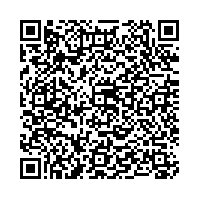