Bisphosphonates, which containing P-C-P units, are used in the treatment of osteoporosis, Paget's disease of bone and to decrease the high calcium levels in cancer patients [1,2]. They are divided into two categories are: nitrogenous bisphosphonates (palmidronate, alendronate and zoledronate) and non-nitrogenous bisphosphonates (etidronate, clodronate and tiludronate) [3]. They show different mechanism of action in the treatment of osteoclast cells. Many cancers that affect bones are usually started in another organ in the body, followed by spreading to the bone; i.e., secondary bone cancer. These are breast, prostate and lung cancer, and myeloma. Some types of cancer treatment can also affect the bones making them weaker, including chemotherapy and hormone therapies. Bisphosphonates are types of drugs that can help in the treatment some types of cancer that cause bone damage [2].

Etidronate disodium (Na2Etd; Figure 1) is used to prevent osteoporosis which caused by corticosteroids (medicine may cause osteoporosis). Etidronate is also used for treating Paget's disease of bone as well as heterotopic ossification (growth of bone tissue in an area of the body other than the skeleton) in people who have had total hip replacement surgery or an injury to the spinal cord. It works on the base of slowing the breakdown of old bone with the formation of new one [4]. 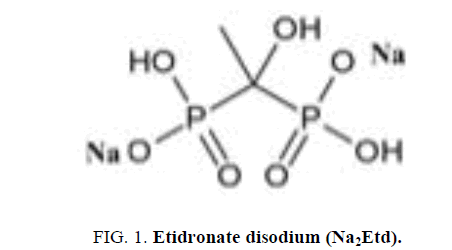 Spectrophotometric determination of Etd-2 in pharmaceuticals, based on its oxidation with potassium persulfate and reaction of the generated orthophosphate ions with molybdovanadate reagent have been reported [5]. It is known that upon complexation, the pharmacological properties are improved due to the action by combination of chelate and metal ion biological properties [6-8]. The preparation and X-ray structure of some Zn (II), Cd (II), Ca (II), Ba (II), Sr (II) and Mg (II) complexes of Bps have been have been reported [9-21]. This article is dealing with the preparation of Pd (II) and Pt (II) etidronate complexes. Their structure was characterized using IR, NMR, UV-visible, mass spectra, elemental analysis, molar conductivity and thermal measurements. The complexes were tested against human prostate (DU 145) and breast (MDA-MB231) cancer cell lines compared with Cisplatin.

The human prostate cancer (DU 145) and breast cancer (MDA-MB231) cell lines were obtained from the American Type Culture Collection (ATCC catalog number). Cells were maintained in RPMI media from Wisent Bio Products, which was supplemented with Fetal Bovine Serum (FBS; 10%), HEPES (12 mL), L-glutamine (5 mL), gentamicin sulfate (500 μL), fungisone (250 μL) and ciprofloxacin (170 μL). The bio-products were purchased from Wisent Inc. The cells were grown in corning cell cultured treated polystyrene flasks, placed in an incubator at 37°C and CO2 level of 5%. The media of each flask were changed when necessary and cell passaging was done between 85% and 95% confluence.

Elemental analyses (C, H, N) were performed in Microanalytical Unit, Cairo University. Infrared spectra were recorded on a Nicolet 6700 Diamond ATR spectrometer in the 4000 cm-1-200 cm-1 range. NMR spectra were measured on Varian Mercury 200 MHz, 300 MHz and 500 MHz spectrometer. NMR spectra were recorded on VNMRS 200 and 500 MHz spectrometer in DMSO d6 using TMS as reference. Mass spectra (ESI-MS) were recorded using LCQ Duo and double focusing MS25RFA instruments, respectively. Electronic spectra were recorded in DMF using a Hewlett-Packard 8453 spectrophotometer. Thermal analysis measurements were made in the 20°C-1000°C range at a heating rate of 20°C min-1 using Ni and NiCo as references, on a on a TA instrument TGA model Q500Analyzer TGA-50. Molar conductivity measurements were carried out at room temperature on a YSI Model 32 conductivity bridge.

Cell culture: Human prostate (DU 145) and breast (MDA-MB231) cancer cell lines were maintained in RPMI media from Wisent Bio Products, which was supplemented with Fetal Bovine FBS; 10% Serum, 12 mL HEPES, 5 mL L-glutamine, 500 μL gentamicin sulfate, 250 μL fungisone and 170 μL ciprofloxacin. The cells were grown in corning cell cultured treated polystyrene flasks, which placed in an incubator at 37°C and CO2 level of 5%. The media of each flask was changed when necessary and cell passaging was done between 85% and 95% confluence.

In vitro growth inhibition essays: The growth inhibiting effects on human prostate cancer (DU 145) and breast cancer (MDA-MB231) cell lines were examined in vitro and the results were compared against negative and positive controls. Both human prostate cancer (DU 145) and breast cancer (MDA-MB231) cell lines were grown to 80% confluence and then incubated in RPMI media onto 96-well plates (corning Inc.) with 3000-5000 cells per well (100 μL medium/well) density. They were allowed to attach for 24 h. treated with a wide range of the complexes concentration range (0.3125 × 10-2-100 μM). The treatment was done in triplicate for 5 days in the incubator. The cells were fixed with cold trichloroacetic acid (50 μL, 50%) for 2 h at 4°C. Using flow of water, the wells were rinsed four times, dried well as much as possible and stained with Sulforhodamine B (SRB; 50 μL, 0.4 g/100 mL) for at least 1 h. at RT. Subsequently, the SRB was rinsed with 1% acetic acid and air-dried overnight. Finally, the dye was dissolved in Tris-base (10 mM, pH=10-10.5; 200 μL) for 2-5 min on a shaking platform. The optical density for each well was recorded using a microplate reader (model 2550; Bio-Rad) at 492 nm [22]. Each complex concentration was run in triplicate in at least two independent experiments. The readings were analyzed using the GraphPad Prism program (GraphPad software, Inc.), and a sigmoidal dose-response curve was used to determine the 50% inhibitory concentration (IC50) [22].

The elemental analyses (C, H, P, Pd) for the complexes are in agreement with the assigned formulae and the molar conductivities (

M) in DMF at room temperature suggest the non-electrolytic nature of the complexes [23,24]. The new complexes are stable under normal laboratory conditions and soluble in DMF and DMSO. The 31P NMR spectrum of Na2Etd exhibits single resonance at 15.69 ppm. In the complexes, this resonance is shifted to lower filed (near δ 19.0 ppm; Figure 4b), indicating the participation of P-O oxygen atoms in coordination. The UV-visible spectrum of the diamagnetic complexes exhibits bands near 470 nm and 325 nm (Figure 5) due to 1A1g → 1Bg and 1A1g → 1Eg transitions, respectively, showing in a square-planar configuration [24,29]. 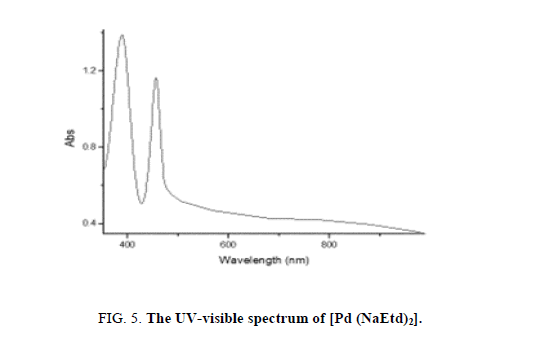 Cancers that spread to the bones damage the bones and release proteins that interfere with the normal bone shaping process. The proteins stimulate the cells that break down bone (osteoclasts) and make them overactive. Since bone is destroyed faster than rebuilt and calcium is normally stored in the bones, the breakdown of bone cells releases more calcium than usual into the blood [4].

Many studies have clearly demonstrated that in vitro bisphosphonates exert cytostatic and pro-apoptotic effects on breast and prostate cancer cell lines similar to those with myeloma cell lines. The viability of breast cancer cell lines cultured in vitro with zoledronic acid, as anticancer agent, was more potent than pamidronate, and clodronate. Increasing apoptosis was convincingly based on changing of nuclear morphology, DNA fragmentation, down-regulation of bcl-2, and proteolysis of poly-APD-ribose polymerase [27-32].

Since the DNA is the main target of the drug, the anticancer activity is related to the DNA-binding ability. The difference between the anticancer activity of [Pt (NaEtd)2] and Cisplatin is based on the binding ability of DNA and cancer cell uptake [24,29]. Moreover, the cell viability of both [Pt (NaEtd)2] and [Pd (Etd) (H2O)2] against human prostate and breast cancer cell lines showed high selectivity of [Pt (NaEtd)2] rather than human prostate and breast normal cell lines (Table 1).

*Selectivity of drugs towards normal cell lines are underlines

Table 1. Anticancer activity of Na2Etd and its complexes against the human prostate (DU 145) and breast cancer (MDA-MB231) cell lines*.

This research is funded by the High Ministry of Education, Post 2014 and BRIDGES-Development-3 Project; Scientific Research Academy, Ministry of Research, Egypt.