Environmental Impact Due to Coal Production and Utilization

In Egypt there are more than 2,000 traditional charcoal kilns which based on earth pit designs that use low-cost but inefficient conversional techniques. This is an old technique for wood carbonization by covering the carbonizing wood with layers of straw and soil to control the flow of air to prevent complete combustion. A pit of 0.8 m-1.2 m deep, 6 m-12 m long and 3 m-5 m wide is excavated in the ground and usually lined with rice straw to prevent the soil pollution. The pit is loaded with wood and all spaces between the larger logs are filled with smaller diameter wood to increase the efficiency of the charge and to prevent the production of brands that may be occur due to the flow of gases from one end of the kiln to the other. Air intake holes are set into the charge at the firing end. The wood is then covered with a 0.1 m-0.2 m layer of straw followed by a layer of soil 0.15 m-0.2 m thick. Wood is fired at the wider end of the pit where the air intake holes have been formed into the bottom of the pit side to permit the air enter from below the wood charge and upper these down holes another hole are formed in the earth cover to permit the wood gases to flow through to the atmosphere to assist carbonization. Once carbonization has been completed, the carbonized wood is damped down with water to douse any fire remaining and to prevent leaked air from causing fires that would burn the charcoal to ash. Care is needed to separate the charcoal from the soil cover without damaging the charcoal. Care should also be taken to minimize the contamination of charcoal with soil. Charcoal contains many elements such as magnesium, iron, aluminum, sulfur, calcium, selenium, arsenic, cadmium, lead and potassium. Some trace elements in charcoal are naturally radioactive, uranium (U), thorium (Th) and their numerous decay products, including radium (Ra) and radon (Rn). Potential hazards from charcoal to human come from inhalation or ingestion of fine particulates. There are many environmental effects due to it in nearby air, soil and hence to human [1-6].

In this study, naturally occurring radionuclides concentrations in charcoal, raw materials (wood) and the surrounding soil from local kiln in Egyptian Zagazig city, were calculated. The associated human risk and environmental effects due to this industry and the utilization of charcoal are discussed to take necessary radiological and dosimetric measures for saving workers and public in these fields.

The study area (Figure 1) located in Egyptian Zagazig city in Sharkia governorate it is widely enough for collecting, storing and drying wood that used as a raw material for charcoal production. The emissions flow in all directions and dispersed through atmosphere and deposited into soil.

Charcoal, soil and wood samples dried in an oven at 378°K (105°C) for about 24 h to remove the water and moisture. They manually grined, about 300 ml from each sample was mixed thoroughly and weighed using a digital balance and packed in plastic cylindrical containers of uniform size. The plastic containers sealed tightly with caps and wrapped with thick cellotape around their screw necks to make them air tight depending on the density of the sample. The wood samples sawed by using an electrical saw and weighed then packed in plastic containers. All samples kept for more than four weeks to attain secular equilibrium between Ra-226 and its progenies to be achieved before gamma spectroscopy. For Gamma spectrometry a P-type coaxial HPGe detector, Canberra model no. CPVD 30-3020, shielded by 10 cm Pb thickness, 1 mm Cd and 1 mm Cu, with a relative efficiency of 30% and a resolution full width at half maximum (FWHM) of 2.1 keV at 1.33 MeV (with associated electronics) connected to multi-channel analyzer (MCA) and coupled with software program Genie 2000, was used. The main advantages required for such detector is high efficiency, high-energy resolution, very low background and nondestructive analytical. Especially the background features of the system are of considerable importance, as they must be known in order to get an estimate of the detection limits and the minimum detectable activity. Efficiency calibration of the system was carried out by using secondary standard sources (RGU-1, 400 μg/g of U-238) and (RGTh-1, 800 μg/g of Th-232) produced from IAEA. The activity of 226Ra and 232Th was determined via their decay products: 214Bi (609, 1120 and 1764 keV), 214Pb (352 and 295 keV) and 228Ac (338 and 911 keV), respectively. 235U was determined via 185.7 keV corrected for 226Ra. 238U was determined via234Pa (t1/2=1.17 min, 1001keV). The activities of 40K were determined from its 1460 keV γ- energy [7-12]. For background measurements pure silica was also poured to similar jar up to the same height as sample. Gamma spectrum for each sample and background were accumulated for about 24 h.

Calculations of activity and other radiation indices

Where net c/s is the net counts per second, (I) is branching ratio for the specific energy, ε (%) is absolute photo peak efficiency of the detector at specific energy, m, is the mass of the sample in kg.

External exposure assessment: Organ doses from external irradiation were calculated according to (DFEXT code) in which dose coefficients were computed during the preparation of Federal Guidance Report No. 12 [13].

rem t h 1 5 h . From these coefficients, equivalent dose (HT) to any organ from raw materials can be calculated as follow [14]:

Where, e (Svm3/secBq) is the effective dose per unit integrated exposure computed as

Where, ARa, ATh and AK are the activity concentrations (Bq/kg) of Ra-226, Th-232 and K-40 respectively. For safe, Hin must be less than or equal to unity.

Alpha index Iα: From the radon inhalation, which originates from naturally occurring radionuclides, the excess alpha radiation is calculated using the following equation [15,16]:

Where, 200 is the recommended maximum concentration (Bq/kg) of Ra-226.

Representative level index (RLI): Activity concentration of gamma due to NORM can be used as hazards indicator by calculation of Representative Level Index (RLI) which must be unity [17]. RLI can be calculated as:

Outdoor absorbed gamma dose rate (Dout): The outdoor absorbed dose rate due to NORM originated from charcoal which distributed homogenously in a huge amount inside the kiln (usually an open area) can be calculated as [18,19]:

Where, LE is the life expectancy (70 years) and RF (Sv-1) is fatal risk factor per Sv, which equal 0.05 for stochastic effects.

A phoswich detector (phosphor sandwich-Tennelec Model/L.B. 1000) was used for gross beta detection in charcoal samples. It is a combination of two detectors for simultaneous gross counting of alpha, beta and gamma. This system consists of, a CaF2 (Eu) scintillator for alpha detection and NaI (Tl) for beta and gamma detection. CaF2 (Eu) is a highly efficiency detector comparing with NaI (Tl), but it is found in a polycrystalline powder form, so, it is only used to detect heavy ions or alpha particles. The scintillation layers were optically coupled to a single PMT with an integrating preamplifier. Then rising pulses from the preamplifier were digitally captured and analyzed [23-25].

Charcoal samples were manually grined, weighed (½gram of each sample), dried in an oven at 378°K (105°C) for about 6 hours to remove the water and moisture and then background and each sample was counted twice for 30 min. Calibration of the detector was carried out by putting 0.5 gm of thorium standard powder (activity=3.26 Bq/gm) in planchet and was counted for 30 min and the efficiency of detector can be determined from the relation:

Where, Ε is the Counting efficiency, A is the activity in Bq/kg (3260 Bq/kg), Net c/s is the counts of sample minus counts of background and m is the mass of sample in kg.

XRF is a non-destructive method of quantitative element analysis used to determine essential and trace elements coverage range from sodium to uranium. In this technique the X-ray beam removes electrons from the inner shells of an element; this inner gap is filled by electrons from an outer shell. The falling electrons emit energy (‘fluorescence’) at wavelengths that are distinctive to each element. The energy produced by cascading electrons is measured by a detector, giving spectrum (as shown in Figure 2-5) from which element concentrations can be calculated in milligrams per kilogram (mg/kg) [26-28]. The JSX-3222 analyzer used to analyze 5 samples (local and imported charcoal) qualitatively and quantitatively. Qualitative analysis can be made by investigating the wavelengths of the fluorescence X-rays and quantitative analysis by investigating the X-ray dose. This element analyzer has been improved in performance such as sensitivity for light elements, energy resolution, quantitative accuracy and also in the ease of maintenance (JEOL LTD). 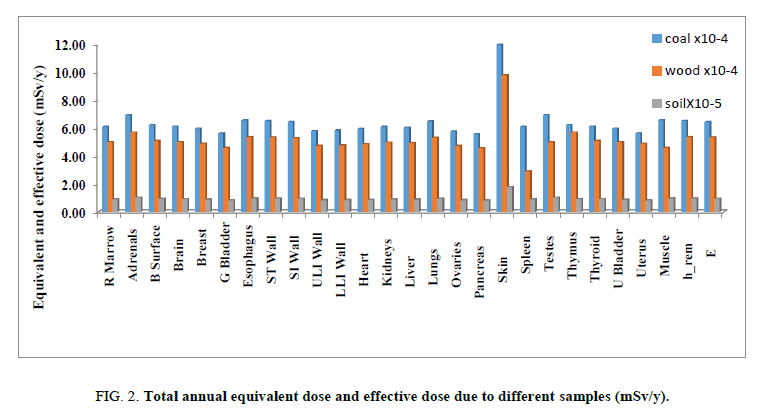 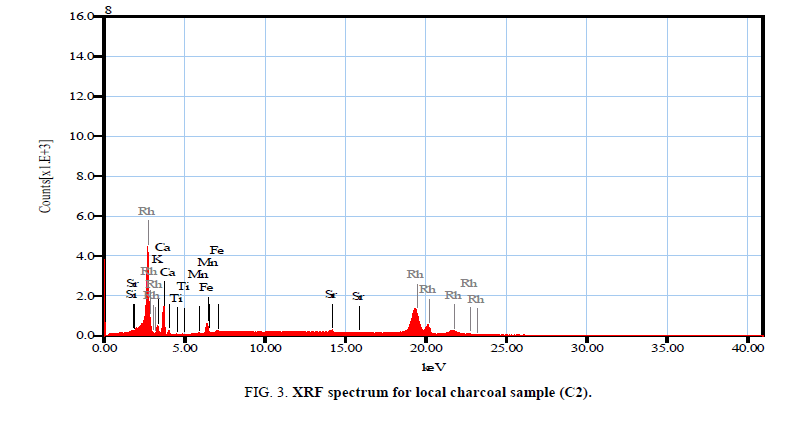 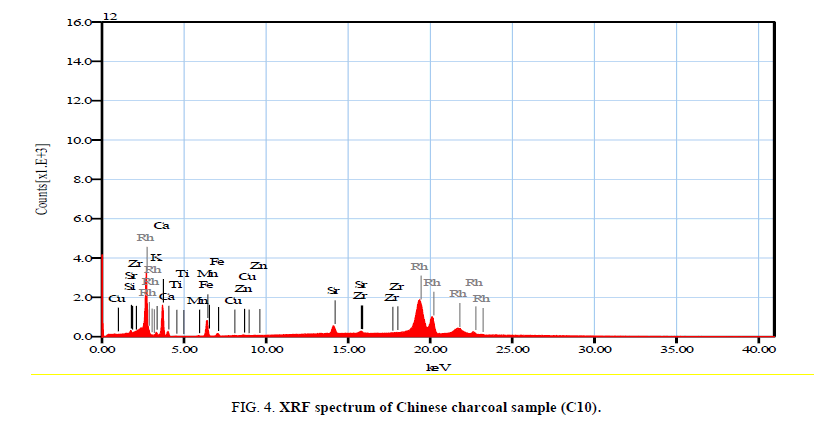 Table 6 shows the annual equivalent to different organs and effective dose due to occupational exposure of workers in local kilns. Results show that skin receive the highest external equivalent dose with value of 1.19E-03 due to the three primordial radionuclides, while, the lowest value of 5.55E-04 was received by the pancreas. We can conclude that the annual effective dose according to charcoal exposure still below the permissible level.

Table 9. Internal index and RLI due to NORM in charcoal and soil inside kiln.

Figure 3-5 investigated the XRF spectrums of local and imported charcoal samples. While Table 10 shows the mass percentage of different elements in local and imported charcoal samples. It is clear that Vietnamese and Chinese charcoal have the higher elemental concentrations. But, these values are not accurate due to that the coverage range for the elemental analyzer was from sodium to uranium only. Also, it is clear that the Indonesian charcoal show the higher concentration of potassium (26.28%) and these results are consistent with the obtained gamma activities due to K40 as shown in Tables 1 and 2.

Table 10. Alpha index due to coal and soil inside kiln.

The range and average of natural radioactivity concentrations in local charcoal samples reported in the present study are low compared with that determined to imported charcoal especially that imported from England. Maximum activity concentration was 16.0 Bq/kg for U-238 and 16.7 Bq/kg for Th-232 and 298.2 Bq/kg for K-40 in soil samples. These activity values associated with permissible external dose to different organs, skin receive the highest external exposure, while, pancreas received the lowest value. Hin due to coal and soil was 3.58E-04 which is low compared to the recommended value (Hin must be ≤ 1). Alpha index due to inhalation of charcoal dust was 1.43E-04 m Sv/y. RLI was 0.78 and ELCR has maximum value of 0.001. For whole body the total annual external dose, due to charcoal and soil, was 0.48 m Gy/y and the total annual effective dose was 0.68 m Sv/y. Elemental analysis for charcoal show that calcium has the main mass %, but these values is not accurate due to that the coverage range for the elemental analyzer were from sodium to uranium only. But, it is clear that the Indonesian charcoal show the higher concentration of potassium (26.28%) and these results are consistent with the obtained gamma activities due to K-40. Gross beta measurements show that most beta were due to K-40 and the remaining were due to beta emitters daughters as Pa-234, Th-234, Pb-212 and Bi-214 for U-238 series and Ra-228, Ac-228, Pb-212 and Tl-208 for Th-232 series.