Homa is a technical term from the Vedic science of bioenergy denoting the process of removing the toxic conditions of the atmosphere through the agency of fire. Air qualities during in the Krishnarajendra Market were monitored during homa and before homa. The detailed study of air quality on Krishnarajendra Market indicates that SPM, RSPM values have crossed permissible limit; SOX and NOX values in the study area are well within the prescribed ambient air quality standards, NAAQS- 2009 CPCB-Govt of India. Heavy metal pollution like Mercury (Hg), Nickel (Ni), Chromium (Cr), Iron(Fe) and Lead (Pb) are recorded and the results indicate that lead and iron are the dominant metals in the ambient air in which lead (Pb) crossed permissible limit. Gaseous pollutions like oxides of Sulphur (Sox), Oxides of Nitrogen (NOx) and Carbon dioxide (CO2) slightly increased during homa. Biological air quality improved during homa. Biological pollution namely, bacterial and fungal numbers were decreased about 77.7% during homa. The study concludes that ancient Homa mitigating the bacterial and fungal pollution in air.

Emissions of air pollutants derive from almost all economic and societal activities. In India, emissions of many air pollutants have increased. Air pollutant concentrations in Bangalore are still too high and harm our health and the ecosystems we depend on. A significant proportion of Bangalore population lives in residential areas where exceedances of air quality standards occur. Particulate Matter (PM), NOx and SOx pollution are particularly associated with serious health risks. Homa is an ancient science given in Sanskrit language at the time of creation. Sanskrit was never anyone's mother tongue; it is a language of vibration. We can make changes in the atmosphere with Sanskrit mantras and fire prepared with specific organic substances, timed to the sunrise/sunset biorhythm. The fire is prepared in a small copper pyramid of specific size and shape. Brown rice, dried cow dung (manure) and ghee (clarified unsalted butter) are the substances burned [1]. Exactly at sunrise or sunset the mantras are spoken and a small amount of rice and ghee is given to the fire. There is not just energy from the fire; subtle energies are created by the rhythms and mantras. Atharvaveda also deals with sound therapy aspects of Mantras for the treatment of the ailing human system at the physical, psychological and spiritual levels. The Samaveda focuses on the musical chanting patterns of the Mantras and the subtle form of Yajna by defining the latter as the process of mental oblation on the surface of internal emotions through the cosmic radiation of the omnipresent subtle energy of sound. The Yajurveda contains the knowledge of principles and methods of performing Yajnas as Spiritual and Scientific experiments for global welfare [2]. The present study was carried out to predict the air quality of Krishnarajendra Market well known as K. R. Market or City Market, Bangalore and efficacy of ancient homa on air quality.

Krishnarajendra Market also known as K. R. Market or City Market is one of the oldest commercial centres in Bangalore. K. R. Market is situated one Kilometer away from the Bangalore City Railway Station. Its area extends upto Kalasipalyam Road in the North, Binnypet Road in the South, Mysore Road in the West and Town Hall in the East. With the improving economy and rapid increase in the population of Bangalore urban cities, stress on the environment increased drastically. (FIG. 1). 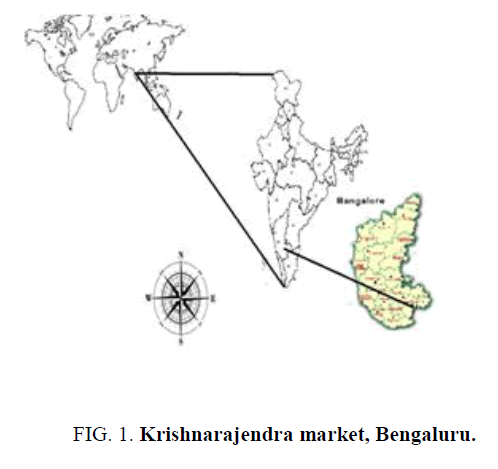 Gaseous and particulate matter: The study was carried out during the month of March, 2014 on the SOx, NOx and heavy metal concentration in the ambient air of Krishnarajendra market, Bangalore, Karnataka state, India. High volume air sampler (Envirotech’s APM 415, Envirotech instruments, New Delhi) were used for samples collection for 24 hours. The average flow rate 1.1 litre per minute (LPM) were maintained throughout the study. All the collected gaseous samples were collected in carboys bottle and stored in refrigerator. Oxides of Sulphur estimated by modified west & Geake Standard Method and Oxides of Nitrogen estimated by Sodium hydroxide method [3]. Sampled glass fiber filter paper were packed in polyethylene covers and transported immediately to the laboratory and analyzed for PM10 and heavy metals in PM10 using standard laboratory procedures [4].

An Atomic Absorption spectrophotometer (AAS), Shimadzu (Model AA-6300), Japan was used to determine the trace elements (Mercury, Nickel ,Chromium, Iron and lead) concentrations in PM10 size fraction. The sampled filters were extracted in acid mixture to remove trace metals. Each filter was placed in 30 mL concentrated nitric acid (70%) and 10 mL of hydrogen peroxide (30%) solution into the microwave digestion vessel. The acid was evaporated at 180? for about 1 hour.

The procedure was repeated twice and was continued to heat until the residue was barely dry. Upon cooling, 60 mL water was added and agitated carefully. The solution was filtered to a 100 mL volumetric flask and diluted to the mark with de-ionized water and used for the trace metal analysis with AAS. Blank was prepared by the same procedure using unexposed filter medium.

Petri dishes were incubated for 24 to 48 hours at 37? (to determine the total number of bacteria) and for 5 days at 25? to enumerate fungi. The results were shown by colony forming units in 1 m3 of air (cfu/m3). Bacteria were identified by macroscopic estimation followed by biochemical tests according to bacteria classification Bergey’s manual [5].

The ambient air quality of Kalasipalya market evaluated and compared with Ambient Air Quality Standards (AAQS) prescribed by Central Pollution Control Board (CPCB), Ministry of Environment and forest, Government of India. The Ambient air quality result reveals that SPM, RPM values are increased during homa and have crossed permissible limit prescribed by Central Pollution Control Board, Government of India. The estimated Suspended Particulate Matter (SPM) 621 μg/m3 and Respirable Particulate Matter (RSPM) 115 μg/m3 was recorded before homa. The standard limit is 100μg/m3. During homa SPM and RSPM concentration were increased to 698 μg/m3 and 142 μg/m3. Similarly, gaseous pollution like Sox and NOx values are increased during homa activity. Ambient Sox concentration before homa was an average of 9.5μg/m3 and the values were increased to 10.6 μg/m3. Eventually, NOx concentration in ambient air increased 20.0μg/m3 to 24.3 μg/m3. However, these gaseous pollutions area are well within the permissible limit in the study area. The major sources of air pollution in the area are identified as construction activity, vehicular movement, aircraft movement and dust arising from unpaved village roads. The main air pollutant would be dust or particulate matter generated due to construction activity and vehicular transportation (FIG. 2). The emissions of Sulphur dioxide (SO2), oxides of Nitrogen (NOX) are contributed by diesel operated vehicles plying on roads, hence it can be concluded that there will be a significant impact on air quality due to anthropogenic activities. Transportation sector is a major source of air pollution in Bangalore, it is estimated that the account for nearly all of carbon monoxide (CO), more than 80% of nitrogen oxides (NOX), 40% of Volatile Organic Compounds (VOC), 20% of sulfur dioxide (SO2), and 35% of PM10 [6] (TABLE 1).

Table 1: Comparison of hold up relations.

Biological pollutant includes bacterial and fungal were monitored in the ambient air and compared with outdoor air quality standard prescribed by Polish-European Protection Agency-89/Z-04111/02 and PN-89/Z-04111/03 [7]. The population density of bacteria ranges between 9,500 CFU/m3 to 12,600 CFU/m3 of air at Krishnarajendra Market, Bangalore which is above the permissible limit prescribed by US Environmental protection Agency and Australian Biological Indoor air Quality. The standard prescribed for biological contamination in Hospital Indoor environment should be within (0 to 450) CFU/m3. Australian biological contamination standard for indoor air quality ranges from (100-18,000 CFU/m3 ). The main source of the bacterial species staphylococcus might have naturally originated by aerosol generated from fecal contaminated water bodies and from the surface of the earth. A maximum number of Gram negative and gram positive bacteria were counted including pathogenic aerobic micro-organisms in the air. Over all morphological and biochemical studies revealed that, majority of them are Stephylococcus and Streptococcus sp., These organisms are exclusively pathogenic in human health responsible for many cases of Meningitis, Bacterial Pneumonia, Endocarditis and Necrotizing Fasciitis [8].

The average outdoor fungal concentration during day time was approximately 2,340 CFU/m3 of total volume of air in the study area. Aspergillus sp., is the most common fungal species that were isolated and identified which causes allergic diseases worldwide. Aspergillus sp., are dominant among the airspora which have been recognized as important allergens for causing human allergic diseases. A minimum number of colonies of Monospora sp., Candida, Alternaria and Penicillium sp. were found in ambient environment recorded throughout the study. Fungi and Actinomycetes are also widespread in the air environment; they might have originated from different sources like soil, plants, vegetable, fish market, floating population at kalasipalya bus station and water (TABLE 3). The bioaerosol reduction after Homa perhaps attributed by metal oxide generated during homa performance. The metal pyramid used for homa activity made up of with Copper and gold which may produce the Copper Oxide (CuO) during burning process with ghee, fire wood and dry cow dug. Copper oxide is an active catalyst on organic and inorganic constituent present in the dry cow dug and fatty acid containing ghee may produced the various active components like Aromatic hydrocarbons, Acetylene, Methane etc. These active components effected on microbial surveillance in air. The present study supported by Monk [9] tested that Cupron Enhanced EOS Surfaces containing Copper Oxide kill above 99.9% of a wide range of bacteria within two hours of exposure and continue to do so even after repeated contamination and multiple wet and dry abrasion cycles, passing all the acceptance criteria required by the EPA [10].

The study conclude that ambient RSPM, SPM and bioaerosol pollution were crossed permissible limit prescribed by NAAQS,CPCB, New Delhi which is potentially health risk of vendors, visitors and residence of Krishnarajendra Market. The ancient Homa activity could be a tool for mitigating the biological pollution in air.