The uranium is one of the main radioactive elements which, there is increasing need for development of simple and rapid monitoring of this element in the environment. The feasibility of thin-film solid phase extraction for alpha spectrometry for determination of uranium was investigated. Some parameters than can affect the extraction recovery and intensity of alpha spectrometry such as type of filter breakthrough volume, and amount of TOPO were studied. The calibration in the range of 2 μg to 400 μg of uranium was linear and the obtained LOD was 0.9 μg. The calibration and analytical sensitivity were better than XRF. The method was applied for determination of uranium in water samples.

Various methods have been used for the analysis of uranium in environmental samples, including Inductively Coupled Plasma Mass Spectrometry (ICP-MS), Thermal Ionization Mass Spectrometry (TIMS), Neutron Activation Analysis (NAA), Gamma spectroscopy, and Alpha spectroscopy. Alpha spectroscopy is a technique for identification and quantification of alpha emitter isotopes based on energy spectrum of alpha emitted [2-4]. Alpha spectrometry appears to be a highly satisfactory method for the isotopic analysis of uranium present in natural waters. When an alpha particle strikes the silicon detector a charge pulse is produced which is proportional to the energy of the incident alpha particle. This pulse is converted to a voltage and amplified by a preamplifier before being fed into a pulse height analyzer (PHA). The PHA allows the number of pulses whose peak lie within a certain voltage range to be measured. Alpha spectroscopy method is superior for its very high sensitivity and accuracy but to get accurate results, time-consuming and costly methods are needed. Three isotopes of uranium occur in nature. These isotopes have atomic masses of 238, 235, and 234. U238 is by far the most abundant, accounting for 99.28 weight percent of all natural uranium. 235U accounts for most of the balance (0.711 percent), and 234U has a very low chemical abundance (0.006 percent).

Therefore, any operation that reduces sample preparation time and steps could increase practical applications [5,6,7]. Uranium occurs in low concentrations in many natural waters. Sea water has an average uranium content of about 2.0 μg L-1 (μgs per liter), and most fresh waters have concentrations below 10.0 μg L-1. Some ground-water sources, however, have uranium concentrations as high as several milligrams per liter. The present investigation was initiated to establish the methodology, sensitivity, and accuracy with which the relative abundances of 238U, and 234U can be determined in natural water. One of these alternatives is the use of solid phase extraction. This technique contains a solid matrix as substrate and a chelating agent as extractant or modifier. In nature, uranium is usually associated with oxygen to form of UO22+ ion. This ion can be considered as the final result of U6+ hydrolysis. Tri octyl phosphine oxide as an organophosphate compound is one of the best extractants for uranium (6-capacity) in the form of uranyl ion due to their special chemical and structural features. Therefore, it can be used in the manufacture of solid phase as chelating agent [8].

In this study, for determination of uranium in water samples, from method based on thin film solid phase extraction for the preconcentration of uranium on a modified paper filter has been used. We are trying to survey the feasibility of thin film solid phase extraction for the determination of 238U and 234U. For preparation of this substrate, tri-octyl phosphine oxide was used on a filter paper as a modifier. This modifier plays role of uranium absorbent. The paper filter, in addition to the solid phase base, is as a required planchet in the alpha spectroscopy. One of the used method features in this study is simultaneous implementation of processes such as separation, preconcentration and mounting instead of their multistage implementation [7]. Another feature of this approach is the implementation of a continuous system, whereas the batch system has been used in similar studies [9,10]. Meanwhile, the main interfering energies are out of range of uranium isotopes energies or their amount is low. This is a rapid radiochemical method for sample preparation in which simultaneously separation, extraction and analyt mounting in a continuous system are done.

Radiometric analysis was performed with an alpha-spectrometer (ORTEC, USA) equipped with passivated ion-implanted planar silicon detector with a 5000 cm2 active area (50 kev nominal resolution) mounted in a vacuum chamber and coupled to a low noise preamplifier, a pulse-shaping amplifier, analog to digital converter (ADC), and a PC-resident multichannel analyzer (1024 channels). The source-to-detector distance was 5 mm (ε ≈ 43%). For calibration 241Am, 234U, and 238U source was used.

Procedure included first placing an alpha source into the vacuum chamber. The chamber would then be sealed and de-pressurized. Alpha particles emitted from the source and contact into the detector. A current is created from the information of the particles remaining energy and turned into voltage that the computer can interpret into data.

To calibrate the α-spectrometer, we use 241Am emitter. The α-detector is enclosed in the vessel and the open americium source is screwed into the source holder inside the vessel. Prior to sample measurement, the background was carefully measured under identical conditions and determined within the channels that correspond to the alpha peaks. The background value has been subtracted from the measured alpha peak in the spectrum of each sample.

All reagents were of analytical reagent grade unless otherwise stated. Trioctyl phosphine oxide was obtained from Sigma-Aldrich. Heptan, UO2(NO3)2.6H2O, and nitric acid were prepared from Merck (Germany). 238U stock standard solutions (1000.0 mg mL-1) each were prepared from uranyl nitrate hexahydrate UO2(NO3)2.6H2O in HNO3 and was diluted daily for obtaining working solutions.

Both qualitative and quantitative analyses may be made by measurements of the alpha energy spectra of suitable sources. Figure 1 shows the characteristic alpha spectrum of 241Am, 234U, and 238U which each emit alpha particles of three distinct, but only slightly separated energies. When the energy scale is calibrated the spectrometer can be used to measure spectra of any samples. A set of spectral lines is a “fingerprint” for the radioactive nuclide. By means of this fact an unknown nuclide can be identified via its spectrum (Figure 2). The most important premise for high-resolution alpha spectrometry is the availability of good sources which should be (infinitely) thin and massless, of regular, known, and reproducible shape, smaller in area than the active area of the detector, new (no sputtering or recoil losses), prepared on a conductive backing, in order to allow the application of a positive bias. For this purpose, we investigate the feasibility of thin-film solid phase extraction as a preconcentration method for determination of uranium by alpha spectrometry.

Effect of type of filter paper 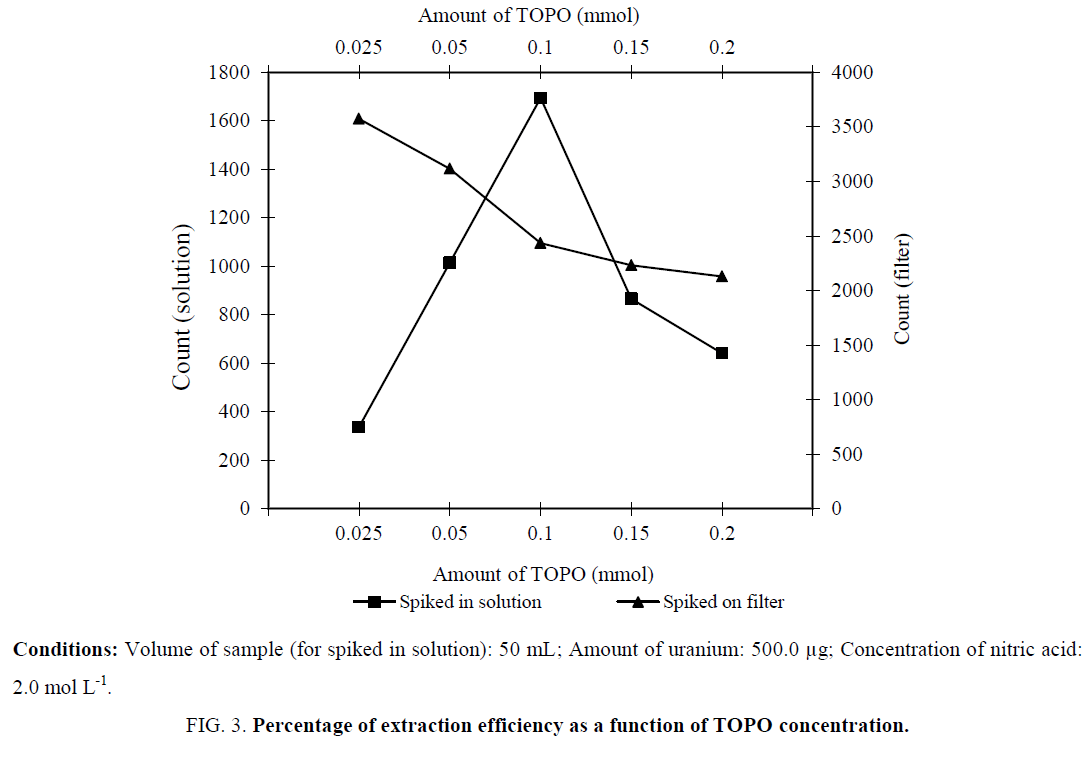 Figure 3: Percentage of extraction efficiency as a function of TOPO concentration.

1.0 mL of 0.1 mol L-1 TOPO in n-hexane was carefully sprayed onto surface of filter paper in order to ensure its homogeneity and dried in ambient temperature. Six aqueous solutions (50.0 mL) containing uranium from 25.0 μg to 400.0 μg and 2.0 mol L-1 nitric acid were submitted to the whole analytical procedure. After drying, the filter paper analysed by alpha spectrometry at channel of 200-360 and 361-400 for 238U and 234U, respectively. The results obtained showed that linearity were excellent for uranium with correlation coefficient better than 0.999 which indicates that a good linear regression was established between intensity and the concentrations. The calibration curve for 238U (left-channel 200-360) and 234U (right- channel 361-410) are given in Table 1. In our method the shape of peak for 238U and 234U are not good but we can use the channel for determination of 238U and 234U. Thus by using calibration cure for 238U and 234U and intensity of unknown samples we calculate the values of uranium content in water samples. The limit of detection (LOD), based on the signal-to noise ratio (S/N) of 3, was 0.9 μg and 9 μg for 238U and 234U, respectively.

According to our previous work, we use XRF for determination of uranium from water by solid phase extraction. The obtained equation shows that calibration sensitivity (slope of calibration curve ratio) for alpha spectroscopy was greater than XRF (525 times) (Table 1).

Different amounts of uranium ions were spiked in a tap water and a mineral water to estimate the accuracy of the procedure. The resulting solutions were submitted to the presented procedure (solutions were passed through modified filter paper), and after drying, the filter paper was analysed by alpha spectrometry. The results are given in Table 2. Good agreement was obtained between the added and found uranium content using the recommended procedure.

The proposed method shows advantages such as: It is simple, rapid and low analysis cost. The possibility to determine uranium in water by using alpha-spectrometry with direct measurement on modified filter paper indicates an excellent advantage of this proposed procedure over existing methods.