The study involves on producing of activated carbon from wheat straw, uncooked and cooked corn cobs by using chemical activation method with 50 wt% phosphoric acid followed by carbonization in N2 atmosphere at 500°C. The efficiencies of the activated carbons are tested with the removal capacities of organic waste such as oil. Oil spills on water bodies are harmful to the environment and humans. The best oil adsorption capacity was shown by activated carbon prepared from cooked corn cob 5.25 goil/gsorbent. Under certain process conditions, several active carbons with approached BET surface areas have been produced, reached 1343.75 m2/g and pore volumes 0.9106 cm3/g for cooked corn cob carbon. Activated carbons were characterized by using Fourier transform-infrared (FT-IR) spectroscopy and nitrogen adsorption/desorption isotherms.

Oil is one of the most important energies and raw material sources for synthetic polymers and chemicals worldwide. Whenever oil is explored, transported and stored and its derivatives are used, there is risk of spillage with the potential to cause significant environmental impact. Pollution by petroleum oils affects sea life, economy, tourism and leisure activities because of the coating properties of these materials. Oil spills harm the beauty of polluted sites; the strong odor can be felt miles away and the excessive growth of green algae alters sea color and the landscape [1]. From estimation, 3.2 million tons of oil is discharged into marine environment annually [2]. Crude oil spilt in the marine environment undergoes a wide variety of weathering processes, which include evaporation, dissolution, dispersion, photochemical oxidation, microbial degradation, agglomeration [1,3] (FIG. 1). One commonly used technique for remediation of petroleum-contaminated water is adsorption. Adsorption is a physical process wherein polluting chemicals adhere to the surface of a solid. Typically, most adsorbents have porous structure with many fine pores and occur in monolayer [4-6]. A wide range of materials for water remediation have actually been employed in adsorbing oil and these include activated carbon [7]. Activated carbon (AC) is widely used on an industrial scale as an adsorbent mainly in the purification/separation of liquids and gases and also as a catalyst and catalyst support [8-14]. Furthermore, newer applications are ever emerging, particularly those concerning environmental protection and technological development [15]. Activated carbon is characterized by a vast system of pores of molecular size within the carbon particles. Activated carbon consists of non-planar layers of carbon (with some linearly or single bonded carbons). This makes up the entire carbon specimen and explains the existence of porosity and constitution of porosity over the entire carbon specimen. FIG. 2 shows mechanism of surface coverage [16]. • Iranian crude oil (medium) was used as contaminant for water. The main physical properties of crude oil were summarized in TABLE 1.

Wheat straw, cooked and uncooked corn cobs were used for preparation of activated carbon were obtained locally. The precursors were dried overnight in an oven at 105°C. The dried plant samples were cut and sieved to desired mesh size (1-2 mm). The activated carbons were prepared by impregnating the dried precursor with 50 wt % H3PO4 with ratio of 1:2.5 plants for 72 hours then filtrated and dried at 393 K. Then the products were loaded in a stainless steel vertical tubular reactor placed in a tube furnace and carbonized at 500°C for 3 hours in absence of air and in flow of purified nitrogen (99.995%) at 80 ml/min. The schematic diagram of the activated carbon preparation is shown in FIG. 3 [15,19]. 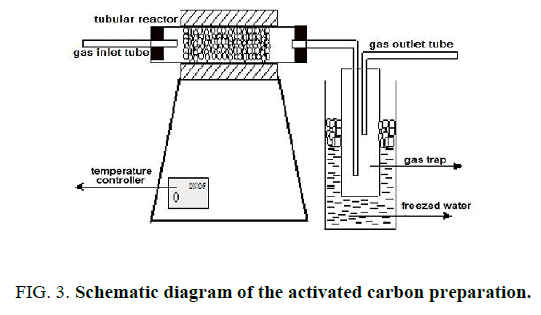 The carbonized products were washed several times with hot water then cold by distilled water until the pH value of the effluent reached 7, filtered and finally dried at 105°C. The dried activated carbons were crushed and sieved to desired mesh size (90 μm). The obtained activated carbons were designed as WSC, UCC, CCC for wheat straw, cooked and uncooked corn cobs respectively.

A 500 mL sample of artificial sea water (3.5% NaCl) was placed in a 1 L glass beaker 40 g of oil was added to the beaker. The beaker containing crude oil and artificial sea water was mounted in a shaking apparatus; 4 g of a sorbent material was added to the beaker, which was shaking for 15 min at 150 cycles/min. The oil content was weighed after a 30 seconds drain period. Oil content of the sorbent was analyzed according to ASTM F 726-99.

SS=weight of adsorbent samples at end of oil test.

This test was performed at 23 ± 4°C. And all oil absorbency was measured three times and an average value was used [1,20].

The pore structural characteristics of the as-prepared activated carbons were determined by nitrogen adsorption at 77 K using a nitrogen sorption/desorption measurements. Prior to the analysis, the sample was degassed for 3 hours under vacuum at 573 K. The sample was transferred to the analysis system where it was cooled in liquid nitrogen. Analysis was carried out at 77 K to obtain the nitrogen adsorption isotherm. The SBET was calculated by the BET (Brunauer-Emmett-Teller) equation. The total pore volume was estimated to be the volume of liquid N2 adsorbed at a relative pressure of 0.95. The mean pore radius (ra) was calculated from the equation (2) [21].

TABLE 2 shows the oil adsorption capacity of the activated carbons prepared from the three agricultural waste (wheat straw, cooked and uncooked corn cobs), the best oil adsorption capacity was from activated carbon prepared from ccc 5.25 goil/gsorbent, because it has a surface area and pore size larger than WSC and UCC, and this is subsequently demonstrated by the application of the bet equation. 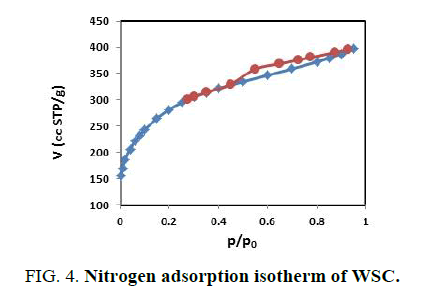 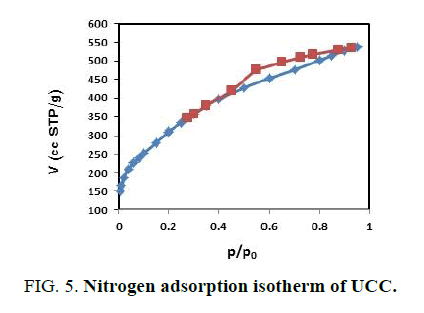 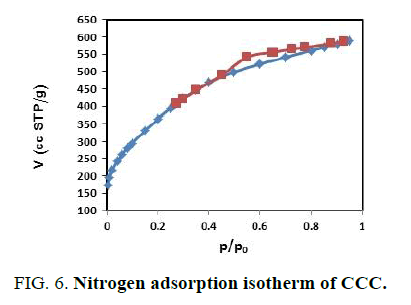 The textural characteristics (surface area, total pore volume and mean pore radius) of the prepared activated carbons are summarized in TABLE 3. The best surface area and pore size was for activated carbon prepared from CCC, because some of the components of the lignosilosic mass were lost by the process of cooking.

Infrared spectroscopy provides information on the chemical structure of the activated carbons. FIG. 7,,8 and 9 show the FTIR spectra of the synthetic carbons obtained by phosphoric acid activation from wheat straw, uncooked and cooked corn cobs. 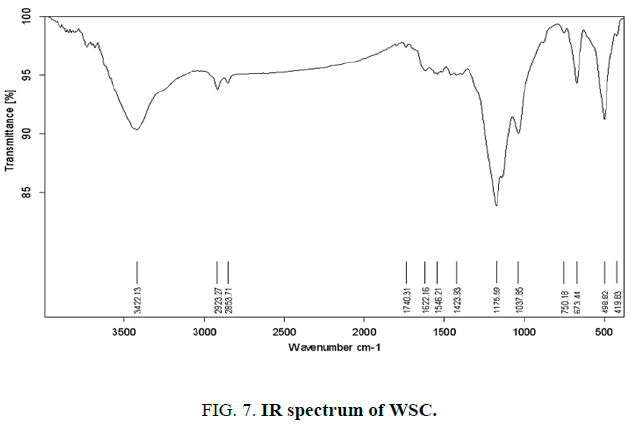 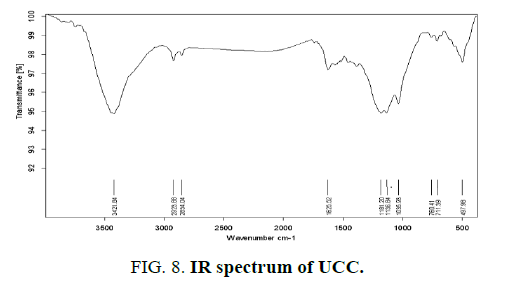 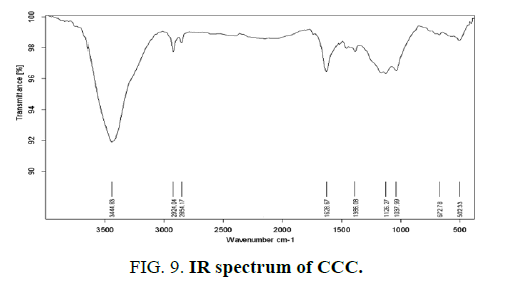 All spectra show a wide transmittance band 3420 cm-1-3450 cm-1. This band can be assigned to the O–H stretching mode of hydroxyl groups and adsorbed water. The position and asymmetry of this band at lower wave numbers indicate the presence of strong hydrogen bonds. The FTIR spectrum of synthetic carbons shows absorption bands due to aliphatic (2920 cm-1 and 2850 cm-1: C–H stretching in –CH–; 1450 cm-1: –CH– deformation). The bands near (750) cm-1 are due to out-of-plane deformation mode of C–H for different substituted benzene rings. The small band at about 1700 cm-1 is usually assigned to C–O stretching vibrations of ketones, aldehydes, lactones or carboxyl groups.

The spectra of the prepared activated carbons also show a strong band nearby (1620) cm-1 due to C–C vibrations in aromatic rings. Broad band at 1000 cm-1-1300 cm-1 is usually found with oxidized carbons and has been assigned to C–O stretching in acids, alcohols, phenols, and ethers and/or esters groups [19]. Nevertheless, it is also a characteristic of phosphorous and phosphor carbonaceous compounds present in the phosphoric acid activated carbons [23]. Assignment in this region is difficult because absorption bands are overlapped. The peak at 1190–1200 cm-1 may be also assigned to the stretching mode of hydrogen-bonded P=O, to O–C stretching vibrations in P–O–C (aromatic) linkage and to P=OOH [15].

I am so grateful to the physical chemistry researches lab (Dr. Nasouh Alaya and Dr. Marwa Rabah) for the successful completion of my work.