Spirulina platensis, a micro algae (cyanobacterium) has been reported as biosorbent for removal of several heavy metals from industrial effluents. The cyanobacterium was exposed to unknown concentration of zinc. Adsorption of heavy metal, namely Zn by the biomass was evaluated under different conditions that included pH, contact time, temperature, concentration of adsorbate and the concentration of dry biomass. The adsorption of heavy metals was found to increase gradually along with decrease in biomass concentration. The biosorption of zinc was estimated as maximum in effluent containing 100 mg of dry biomass for one-liter (0.1 g/L) at pH 8 at 35°C with the optimal contact time of 60 min. The present study describes the Zn absorption by biomass of Spirulina platensis (S. platensis) that has been used to remove many pollutants from effluents by absorption. The process would not only be economic but also eco-friendly and multipurpose as an alternative to conventional methods of biosorption of heavy metals.

Enormous quantities of organic and inorganic compounds are released into the environment each year as a result of human activities, deliberate and well regulated (e.g., industrial emissions) while in other cases they are accidental (e.g., chemical or oil spills). Irrigation with electroplating industrial effluent contaminated water poses threat to plant growth and consumers since it contains deleterious heavy metals such as chromium, copper, zinc and cadmium [1]. Such metals cannot be degraded into harmless particles once released into the environment; however, since it is an increasing problem, we need to consider as a major environmental hazard [2].

Biological treatment processes for removing heavy metals from waste water treatment are most effective when contaminant concentrations are above 100 mg/L. There are many categories that describe the biological process of removing metal ions from solution. One such process is biosorption (adsorption) of metal ions onto the surface of a microorganism. Other possibility is intracellular uptake of metal ions. Finally, chemical transformation of metal ions by microorganisms has also been reported [3]. The term biosorption is used to describe the passive non-metabolically mediated process of metal binding to living or dead biomass [4]. Algal biotreatment of industrial effluents be an improved integrated high rate algal ponding system in successive stages by the cultivation of filamentous forms of algae [5].

Many researchers have recently identified and proved that removing heavy metals from wastewater can be done by means of biological organisms like algae, bacteria, fungi, and yeasts [6-8]. Among these, marine algae [9] are relatively cheap and particularly able to accumulate metals in the oceanic environment. Due to their high adsorption capacity, they are largely employed for heavy metal removal [10]. In particular, the algae S. platensis grows very well in seawater or in salt waters [11] and this microalga (during summer) is available in dried form, which can be easily utilized for metal adsorption or other applications [12].

Arthospira platensis are free-floating filamentous cyanobacteria with cylindrical, multicellular trichomes. It belongs to blue-green algae family, is an alternative source of protein for human food and feed purposes. Other than protein, it contains polysaccharides, lipids, and vitamins. It is made up of many functional groups such as carboxyl, hydroxyl, sulphate and other charged groups which are responsible for metal binding [13]. The size of this unicellular organism is between 0.3 mm and 0.5 mm. Several reports show accumulation of Cu2+, Pb2+ and Cr3+ as well as Ni2+, Cd2+, Co2+, Fe2+ and Mn2+ by S. platensis [14]. Algae in metal containing localities tend to concentrate metal from ambient water and pass them to higher tropic level. Algae is the base of the food chain; its primary productivity depends upon maintaining the level of available metal ion at a concentration between toxicity and deficiency [15].

Fresh culture of S. platensis, the blue green algae was collected from a local commercial production unit. Effluent that is used to grow the algae to comprehend the ability of the algae to absorb heavy metals was carried out with a sample got from an electroplating industry located in Coimbatore. The effluent was raw in nature to which no treatment was carried out in the electroplating industry.

Biosorbent using the micro algae S. platensis was acquired from the commercial production unit. Collected sample was cultivated using Zarrouk medium [16]. The sun-dried biomass was rinsed with deionized water to remove the residual alkalinity. Later, it was dried in an oven initially at room temperature for 24 h and subsequently at 80°C for 12 h. The dried biomass was obtained in a powder form [17]. Dried algal biomass was used for the studies after rehydration. Re-hydrated biomass was prepared by suspending the prepared dry biomass in 100 ml of deionized water taken in 250-ml-Erlenmeyer flask. Flask was agitated for 150 rpm on a rotary shaker at ambient temperature for 60 min. The biomass was finally recovered by filtration through a Whatmann filter paper no.3 and was stored for further use.

To determine the effect of pH on adsorption of zinc by algal biomass test solutions containing 0.1 g of algal dry biomass with different pH levels (6, 7 and 8) were prepared by adjusting the pH to desired initial pH value using 1 N HCl or 1 N NaOH before mixing the adsorbent. pH measurements were done using pH meter. The time, temperature and concentration of biomass was maintained as constant throughout the study.

Impact of contact time on adsorption of zinc by biomass was determined at varying periods of incubation time (40 min, 60 min and 80 min), with effluent. After incubation for specific contact time, the supernatant was then analyzed for residual metal concentration in the solution.

Effect of incubation temperature on biosorption of zinc was carried out at different incubation temperatures (35°C, 45°C and 55°C) with effluent which contained heavy metals. The pH, concentration of adsorbent biomass, and contact time were kept constant throughout the study unless otherwise mentioned.

The effect of dose (concentration) of adsorbent biomass on adsorption of zinc was studied using different biomass concentrations [0.1, 0.2, 0.3 g (dry weight)/L] present in the effluent. The equilibrium time and the pH of the test solution were kept constant to note the amount of biosorption of metal.

After adsorption, the adsorbates – loaded adsorbent were separated by centrifugation at 6000 rpm, 30 min, samples were filtered through the whatmann filter paper no.3 to remove biomass. Zinc concentrations in test solution was analyzed by manually zinc estimation (http://www.titrations.info/EDTA-titration-zinc) carried out under laboratory condition.

Confirmation test for all the optimal conditions for sorption

Experiments were conducted in the sequential order used for the determination of optimal level of parameters and the best result from each experiment was applied for the subsequent and rest of the experiments followed in the sequence. After determination of optimal levels that supported maximal sorption, it was repeated to confirm the obtained results.

The pH is an important parameter affecting biosorption. It is related to the cell wall, which is the primary site of biosorption. The pH of medium affects ionization state of the functional groups on the biomass surface. The pH of the solution has a great effect on the adsorption capacity of metals [18]. Various experiments were conducted to study the effect of pH on zinc removal. At low pH values, uptake capacity was low due to high concentration of H+ ions which are present at low pH, which hinders the adsorption of zinc ions. The adsorption of metal ions was lower at low pH because of high concentration of protons in the solution which will compete with metal ions in the formation of bond with the active sites on the surface of the biomass [19]. However, a sharp increase in uptake was observed in pH range of 8, approaching a saturation thereafter. At pH 5 and above, there are lower numbers of competing hydrogen ions and more ligands are exposed with negative charges, resulting in zinc sorption. Hence, for further optimization of pH, experiments were conducted in a pH 8 which was shown in Figure. 1. An increase in pH means a lower number of protons, which causes a reduction in the competition between the available protons and the heavy metal ions. Increased pH is an indication that the ligands are available for metal ion binding and so biosorption is enhanced [20].

Figure 1: Effect of pH on absorption of zinc by S. platensis.

Data presented in Figure. 2 indicates that the rate of adsorption of zinc increased along with increase in contact time from 30 min to 60 min and declined rapidly on further increase in contact time. Thus, the maximum adsorption of zinc was recorded after 60 min of contact time, although significant levels of zinc adsorption could be observed even after 30 min of contact time. The amount of zinc that was adsorbed at the equilibrium time indicated maximum uptake under the operating condition applied. Therefore, contact time of 60 min was noted as the optimum. It was found that there was a decrease in metal removal on increasing initial metal concentration. Algal cell surface has varying affinity for ionic species, where low and high affinity of functional groups in sorption of metal ions also depends upon concentration of metal ions. Thus, the decrease in metal removal is largely attributed to saturation of adsorption sites [21]. 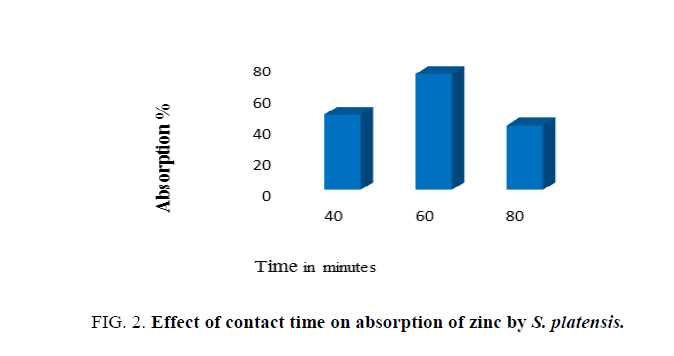 Figure 2: Effect of contact time on absorption of zinc by S. platensis.

Temperature has a vital effect on adsorption process as it can influence the process by an increase or decrease in the amount of adsorption. It was found that metal uptake increased gradually with an increase in temperature. The rate of zinc biosorption by the nonliving cells was very rapid reaching a maximum at 35°C temperature, indicating that the removal of the zinc from aqueous to adsorbent is rapid at ambient temperatures compared to higher temperatures. Increasing temperature is known to increase the rate of diffusion of adsorbate molecules. It directly influences the binding reaction between the adsorbent and the metal ion species in the aqueous solution because there were fewer surface active sites on the cell wall of S. platensis [22]. 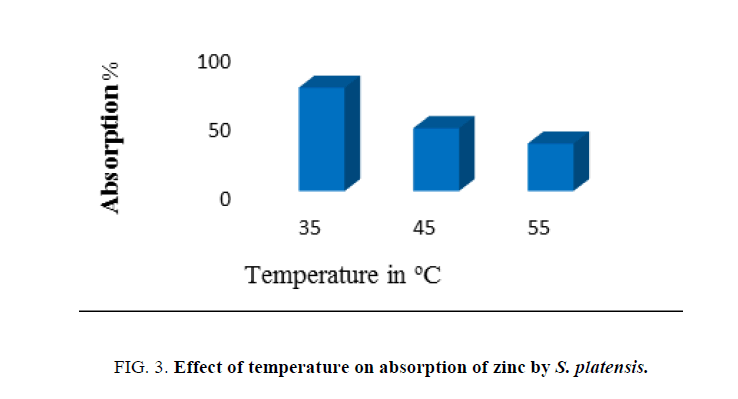 Figure 3: Effect of temperature on absorption of zinc by S. platensis. 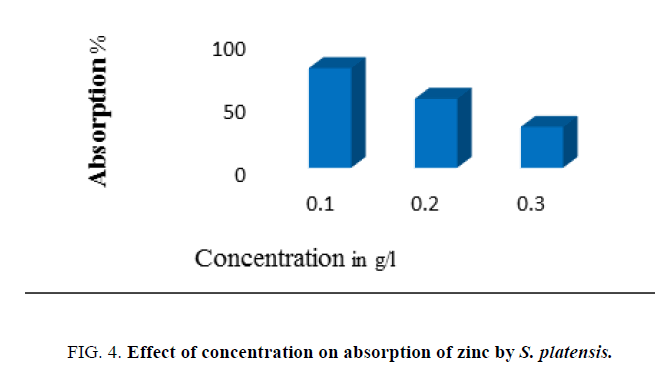 Figure 4: Effect of concentration on absorption of zinc by S. platensis.

A biosorption technology in which living or dead biomass is used to accumulate heavy metals is a method that can replace conventional processes for remediating metal pollution in waste waters. The results demonstrated that S. Platensis stands out as a good accumulator and phytoremediation of zinc. The establishment of a more efficient, natural, and economic cyanobacteria-based system is also required with the aim of making optimal conditions for the successful phytoremediation of metals from contaminated water. It was understood that pre-hydration of biomass is an effective procedure to increase biomass removal capability. It can be used in a full-scale biosorption facility. This study led to the conclusion that Spirulina platensis has rapid zinc adsorption rate and made them well suited for the removal of zinc in wastewater.