Leishmaniasis is an epidemic disease caused by Leishmania parasite. Leishmaniasis is a major disease worldwide many people are affected by this disease. The prevalence of the disease is seen in many countries around the world since many millions are affected by the disease in different countries and thousands of deaths occur every year this is a neglected tropical disease. There are more than 20 species in the world. The parasite develops its life cycle in sand flies. The disease is transmitted by the phlebotomine sand fly which lives in rodents, dogs etc. This parasite uses animals like dogs as a host and develops its life cycle and this disease is carried over to humans through a bite of the insect. This disease is caused due to poor sanitary conditions. The treatments with synthetic drugs have severe side effects and the treatment is very expensive. A major development is seen in developing countries like India in finding new herbal entities to eradicate the disease through herbal remedies. An attempt has been made to review flavonoids and terpenoids their biological role in the treatment of leishmaniasis, these are major secondary metabolite used in the treatment of leishmaniasis by producing therapeutic efficacy against many diseases like visceral leishmaniasis. They are equally potent to marketed antileishmanial drug. This review gives the significance of flavonoids and terpenoids as potent compounds with biological activity present naturally in many plants, fruits, vegetables, as coloured pigments, etc. these compounds can be isolated their therapeutic efficacy can be tested and they can develop promising activities against many diseases.

Leishmaniasis called as Kala-Azar in India is a vector borne disease transmitted by sand flies. Leishmaniasis is a parasitic disease caused by more than 20 Leishmania protozoan parasite species. Almost 2.5 million people are affected all over the world, 1-1.5 million are affected by cutaneous Leishmaniasis and in India over 90000 are affected by visceral Leishmaniasis VL. From 2004-2008 there were an estimated 200,000-400,000 cases and 20,000-40,000 deaths per year globally [1]. WHO is taking preventive measures to eradicate the vector and the disease within 2020 [2]. This parasite starts its life cycle in sand fly (Figure 1). An epidemic disease caused by leishmania parasite and can be transmitted from a bite of an infected sand fly. It affects either the skin or the internal organs. These parasites are transmitted to humans by the bites of the infected female phlebotomine sandfly. There are three different types of leishmaniasis cutaneous, visceral and mucocutaneous. VL is a serious disorder were internal organs like liver, spleen and lymph node gets affected. The symptoms include fever, enlargement of the liver and spleen, anaemia, weight loss, weakness, decreased production of blood cells, bleeding and swollen lymph nodes. Treatments are given using antimony compound sodium stibogluconate and amphotericin B that causes severe side effects than any other treatment option, but which is very expensive. But the diagnosis and treatment given to patients should be in an affordable price. Both treatments have side effects such as fever, liver and kidney damage or heart disease. A new molecule miltefosine, is available can be given orally and has a lower risk of toxicity. The research on herbal remedies should be given more significance to eradicate the disease and the side effects, so researchers should concentrate more on herbal therapies. The aim of this review was to provide an overview of the ethanobotany of medicinal plants used to treat leishmaniasis in India. This review was to analyze the presentation of herbal therapies for the treatment of leishmaniasis, on the basis of diagnosis, treatment, management and follow up with the objective of highlighting visceral leishmaniasis as an important differential diagnostic tool for the eradication of VL [3,4]. Role of Herbal Medicine in the Treatment of Leishmaniasis

Since time immemorial India is considered to be the land of herbal garden, and the ancient practice in treatment using traditional system of medicine, complementary alternative medicine, like ayurveda, siddha, unani and homeopathy. These Indian systems of medicine have played a vital role in treatment of various diseases including, cancer, Alzheimer’s disease, parasitic diseases like, filariasis and leishmaniasis. India is a home for herbal medicine many medicinal plants were used in the form of monoherbal and polyherbal formulation in single and combined dosage forms. In India many herbs are used for leismaniasis, people prefer herbal medicine for treatment since minor or no side effects can be observed and allopathic medicine is the major treatment given but with severe side effects. Varity of medicinal plants have been used by Indian people of different cultures to treat leishmaniasis. Most of the plants were herbs and the commonly used plant part was leaf. Majority of prepared remedies were applied externally to the affected part. There is an urgent need to conduct clinical trials on such plants to support traditional claims and to analyze molecular and cellular mechanisms involved. 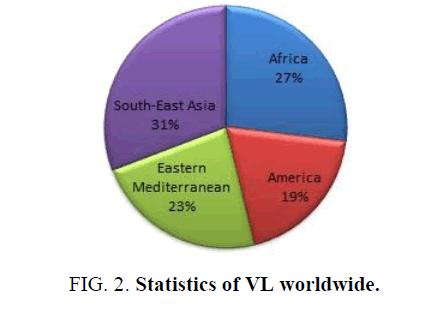 Role of Flavonoids and Terpenoids

Flavonoids and terpenoids are natural occurring secondary metabolites present in plants. Flavonoids are having a polyphenolic structure. They are abundant in plants their biological activity is vast they have high therapeutic value against many diseases which include cardiovascular diseases, anti-cancer, neurological disorders, skin diseases and various other acute and chronic diseases. Flavonoids are therapeutically active and they have antioxidants, free radical scavenging activity. These compounds possess active phytoconstituents, they are potent active constituents found in many plants, fruits and vegetables. They are more efficacious against many diseases and they are potent active constituents present in many plants. They have less side effects and low toxicity. To overcome these side effects and toxicity these natural compounds are used. The isolation of these compounds leads to promising pharmacological activities.

Flavonoids are classified into many classes like flavones, flavonols, flavonones, anthocyanins, isoflavonoids, chalcones etc. each classes of flavonoids are subdivided into many subclasses. They also contain phenolic acids like hydroxyl cinnamic acid present in caffeic acid, ferulic acid and gingerol and hydroxyl benzoic acid present in ellagic acid and gallic acid. They contain hydrosable tannins such as chebulic acid and gallo tannins (Figures 3 and 4). 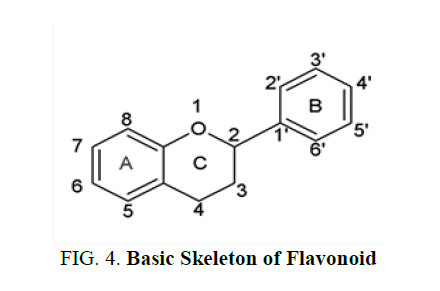 Flavonoid contain C6-C3-C6 compounds, each C6 moiety is a benzene ring. They contain one or more phenolic hydroxyl groups combined with sugar moiety. The hydroxyl groups are found in 5 and 7 position in ring A, ring B contains hydroxyl alkoxyl groups. The aromatic ring A is condensed to heterocyclic ring C attached to a second aromatic ring B. It contains a flavonoid diphenyl propane skeleton. They are divided into two sub classes which include anthocyanins and anthoxanthins. Anthocyanins are water soluble plant pigments containing glycosides. Anthoxanthins are yellow or colorless compounds containing flavones, flavonols, isoflavones and flavonones [5].

• The flavanols [2] are a class of flavonoids obtained from 3-hydroxy-2, 3-dihydro-2-phenylchromen-4-one

• Myricetin [5] is a polyphenolic compound a member of the flavonoid class, with antioxidant activity

• Galangin [6] is a flavonol type of flavonoid which is found in the rhizome of Alpinia galanga.

• Fisetin [7] is a plant polyphenol from the flavonoid group

• Apigenin [9] is an aglycone of several naturally occurring glycosides found in many plants, is a natural

• Catechin [12] is a plant secondary metabolite a flavan-3-ol, a type of natural phenol and antioxidant. It belongs to the group of flavan-3-ols part of the chemical family of flavon

• Epicatechin [13] is an antioxidant flavonoid, occurring especially in woody plants as both (+)-catechin and (-)-epicatechin (cis) forms

• Epigallocatechin [14] is the most abundant catechin found in tea, it is a polyphenol

• The flavanones [16] are type of flavonoids, are colorless compounds, aromatic, ketones derived from flavone that often occur in plants as glycosides

• Hesperetin [17] is a 4'-methoxy derivative of eriodictyol, a flavanone. Hesperetin's 7-O-glycoside, hesperidin, is a naturally occurring flavanon-glycoside, a main flavonoid found in lemons and sweet oranges

• Narigenin [18] is a flavanone present in grapefruit

• Isoflavonoids [22] are a class of flavonoid phenolic compounds, many of which are biologically active. Isoflavonoids and their derivatives are sometimes referred to as phytoestrogens, as many isoflavonoid compounds have biological effects via the estrogen receptor

• Cyanidin [23] is a natural organic compound. It is a particular type of anthocyanidin (glycoside called anthocyanins)

• Delphinidin [24] is an anthocyanidin, a primary plant pigment, and also an antioxidant

• Coumarin [25] is an aromatic organic chemical compound in the benzopyrone chemical class, although it may also be seen as a subclass of lactones

• Chalcone [26] is an aromatic ketone and an enone that forms the central core for a variety of important biological compounds, which are known collectively as chalcones or chalconoids

• Dihydrochalcone [27] is a chemical compound related to chalcone (Figure 5)

Terpenoids are natural products whose structures are considered to be divided into several isoperene units therefore, these compounds are termed as isoprenoids. This particular group of compounds is referred as terpenes. The isoprene units come through the biogenetic means starting from acetate mevalonic acid. Each unit consists of five-carbon having two unsaturated bonds and possesses a branched chain. The terpenoids have a number of isoprene units joined together in a head to tail manner.

Terpenoids are classified on the basis of the number of isoprene units (C5H8) [28] incorporated into specific unsaturated hydrocarbon terpenoid molecules, such as (Figure 6): 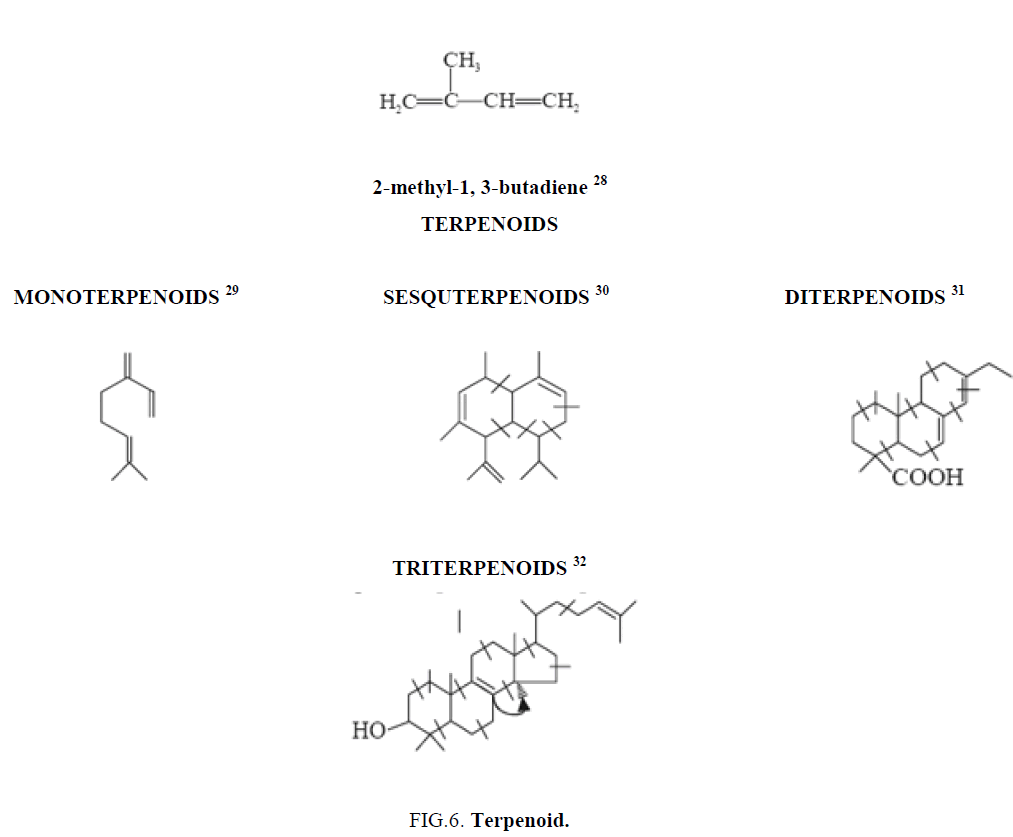 Isoprene rule: The basic concept that terpeniods are essentially built up of several isoprene units is commonly termed as the isoprene rule.

Medicinal Plants Used in the Treatment of Leishmaniasis (Table 1).

Table 1. The table specifies the plant name, the vectors, different extracts, the isolated compounds and their activity.

The different dosage forms and formulations available in the form of nanoparticles, liposomes, neosomes etc. are reported in this study (Table 2).

Visceral Leishmaniasis Kala-Azar a killer in the country is a dreadful disease affecting many millions in the world. According to the World health organization the current prespective is that the disease should be eradicated within 2020. WHO is taking preventive measures to eradicate the disease and the parasite vector in spraying of pesticides, protection and prevention against the insect vectors. Since the symptom of the disease are severe with skin lesions which do not disappear for long time in cutaneous leishmaniasis, visceral leishmaniasis where liver and spleen gets damaged and leads to death and mucocutaneous leishmaniasis leads to loss of oral cavity and nasal tract. These symptoms are severe and the diagnosis and treatment given to this disease is too costly. There are many synthetic drugs available with severe side effects. These side effects are toxic to cells and tissues. These drugs may be potent and efficacious but side effects are more. The cost of these drugs is comparatively high but the treatment given to poor patients must be economic and affordable price.

Hence there is a growing demand for herbal medicine and most of the growing population depends on herbal medicine for treatment. India is a hidden treasure of medicinal herbs, these traditional and complementary alternative medicine should be given prime importance in exploring new plants, extraction of phytoconstituents from them, scientist and researchers must come forward isolate phytoconstituents develop them into new lead compounds and formulations to treat various diseases. Even the cultivation of these medicinal plants must be given prime importance. The duration of treatment in alternative system of medicine through ayurveda, siddha, unani and homeopathy may be longer but with no or less side effects and low toxicity to cells and tissue, no damage to internal organs are the advantages of herbal medicine. The drug prepared may be a drug of choice for the poor patients with safety and efficacy and economic and reach patients in an affordable price to treat visceral leismaniasis.