This work reports the synthesis of a mesoporous pseudoboehmite without the use of organic agents. Precipitation at pH=7 and at atmospheric pressure of a temperature solution of 60°C, alkaline melting of a bauxite, gave a mesoporous pseudoboehmite with a specific surface area of 317 m2/g. The Hydrochloric acid (HCl) is used as a precipitating agent. In contrast, the same procedure repeated this time to the same solution, but at a different temperature of 25°C, provided an amorphous gel low specific surface. The temperature of the synthesis solution therefore has a considerable effect on the textural properties of products made particularly on the volume and the pore diameter. Thus, the amorphous gel has a low pore volume and a high average pore diameter than pseudoboehmite. Moreover, the transformation of this pseudoboehmite obtained by this simple method gave a nano spinel lattice alumina-γ with a specific surface area of 272 m2/g. And the textural study of alumina-γ obtained almost kept the topotactic properties of pseudoboehmite. The analytical methods used during this work to characterize the synthesized products are EDX, XRD, FTIR, SEM and BET.

Pseudoboehmite, which is actually the nanocrystalline boehmite [1-3] of chemical formula (γ-ALOOH), the source of gamma-alumina, has been the subject of many studies both on its morphology and on the size of its particles [4-7]. This particular interest in the size and shape of pseudoboehmite gives important information on the realization of transition aluminas used as catalyst or catalyst support. In addition to application as a source of alumina-γ, it is also used in the field of environmental pollution [8-12]. The Pseudoboehmites are synthesized by several methods, the most common ones the precipitation method and the sol-gel method [13]. Nevertheless, most of the boehmites objects of the different articles are synthesized from aluminum salts like AlCl3, Al2(SO4)3 etc. But boehmites synthesized from bauxite according to a modified Bayer process was reported by D. Panias et al. [14], where a seed of boehmite grain was made within the highly concentrated alkaline solution to effect boehmite precipitates to different temperatures and pH. It has also been reported by P Manivasakan et al. [15], an alumina-γ nano was synthesized from a precipitate of a solution obtained by the alkaline melting of bauxite followed by a whole mechanism of grinding the alumina after calcination. P Manivasakan et al. do not show in any case that they obtained a boehmite but rather talk about a precipitate of hydrous alumina amorphous. While this work, reported in this article, talks about the synthesis of a pseudoboehmite by precipitation whose precursor is a solution of a temperature of 60°C, deriving from an alkaline bauxite melting. And also from the conversion of pseudoboehmite to transition alumina at a temperature of 500°C. Thus, these precipitates obtained at pH=7 are not simple aluminum hydroxide as described by P Manivasakan et al. But it is indeed a nanocrystalline boehmite mesoporous. The details of the synthesis procedure are explained further in this article.

The purchased chemicals are 37% HCl and NaOH of SIGMA-ALDRICH. Bauxite (BX) originating from the south-west region of Chad.

Synthesis of pseudoboehmite from raw bauxite

The method of synthesis differs slightly from that reported by Manivasakan et al. [16]. The melting was carried out at 500◦C. for 2 hours by dry mixing, in a zirconium crucible, bauxite (BX) originating from the south-west region of Chad and NaOH with a BX/NaOH ratio of 0.33. By contrast, Manivasakan et al. reported a mixture of 66.67% wt. of raw bauxite and 33.33% wt. of sodium hydroxide and a melting temperature of 600°C for 3h. However, the solution obtained after melting, commonly known as Bayer liquor, was split into two solutions, the first solution was kept at a temperature of 25°C and the second solution was at a temperature of 60°C. To obtain gels at pH=7, a dropwise addition of a solution of HCl (3M) acid was carried out on each solution which was under simple and continuous stirring. The precipitates experienced overnight aging in their stock solutions at room temperature without agitation. Contrary to what was reported by P Manivasakan and al where they speak of an ageing at 80°C. Finally, the gels of products are separated by filtration, the filtrates are washed several times with the distilled water then dried at 80°C during 6 h to obtain a powder of γ-ALOOH. To ease the reading we noted the gels obtained at 25°C by BN25 and that of 60°C by BN60.

The transition of alumina has been obtained by calcination of the boehmite in muffle furnace during 5h at constant temperature of 500°C with a heating rate of 5°C min-1.

The structures of synthesized pseudoboehmite and alumina samples were determined by an X-ray powder diffractometer (XRD, D2PHASER BRUKER of Bragg-Brentano) using CuKα as a radiation source (λ=1.5406Å). The samples were carried in the 2θ range from 10 to 80°.

An FTIR Spectrometer IR (Apparatus of Vertex 70 DTGS model covering a range of 400-4000 cm-1) was used to carry out the spectrums of pseudoboehmite and alumina. The specific surface area (SSA) of all the samples were calculated according to the BET method using the BET surface area analyzer (Micromeritics; Model: 3Flex). The samples of pseudoboehmite and amorphous boehmite were degassed under vacuum at 110°C for 6 h to remove the physisorbed moisture and the sample of alumina was degassed at 250°C for 3h. The physisorption analysis was carried out with N2 adsorption-desorption measurements at a liquid nitrogen temperature (−196◦C). The desorption pore size distribution, average pore diameter, and total pore volume were calculated according to the Barret-Joyne-Halenda (BJH) model. The composition of the samples was analyzed using the Energy-dispersive (EDX) spectrometry (VEGA3 TESCAN EDX).

Characterization by XRD of the gel synthesized at 25°C. gives an amorphous spectrum identified as a spectrum of an amorphous boehmite (FIG. 1a). The absence of 020 reflections of boehmite amorphous is generally observed for boehmites with very low crystallite size. But the spectrum of the FIG. 1b is a pseudoboehmite whose appearance of its peaks at different values in 2θ (13.57, 27.80, 38.10, 48.93, 64.76 and 71.56) is in conformity with the results obtained by the others [17]. The appearance of the peak (020) at 0.657 nm towards the large values of d (hkl) is due to the very nanometric sizes of crystallites [18]. According to Okada et al. the expansion of the 020 d-spacing of boehmite increases with decreasing crystallite size. This expansion is found to be due to a limited layer stacking number and to excess water in the interlayers of the boehmite structure [19]. 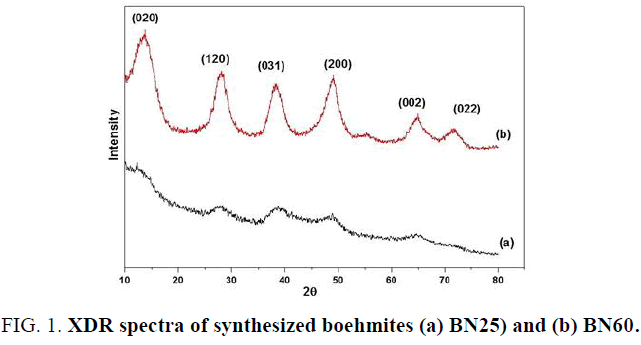 The crystallite size of all the pseudoboehmite and alumina samples were calculated using the Scherer’s equation.

Where D is the crystallite size, k the Scherrer constant (k=0.9), λ the wavelength of the X-ray, H the full-width at half-maximum (FWHM) was calculated using the origin software.

FIG. 2 shows the XRD spectrum of pseudoboehmite BN60 calcined at 500°C. This spectrum obtained at 500°C. is identified as alumina-γ spinel network by HS Potdar et al. [20]. Other researchers [21] also obtained this structure of alumina, at 500◦C although the methods of synthesis, the raw materials and the proportions and natures of the impurities are not the same. The appearance of a peak at 26° at 2θ at the spectrum level of FIG. 2 belongs to the silica. The presence of this silica within BN60 is also confirmed by the EDX spectrum of BN60. 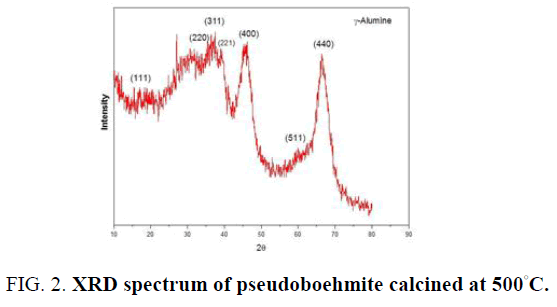 The analysis of FTIR spectra of boehmites in FIG. 3 showed the appearance of bands in different regions of vibration. The spectrum of pseudoboehmite (BN60) dried at 80°C (FIG. 3a) is in perfect conformity with those studied by Frost et al. [22]. The bands at approximately 735, 619.41 and 490 cm-1 are attributable to stretching and bending modes typical of boehmite. A band at 1074.51 cm-1 is the characteristic mode of symmetric bending of hydroxyl groups of the AlO-H bond of boehmite, which disappears when the temperature of calcination increases [23]. The band located around 1637.05 cm-1 and a large band at 3436.58 cm-1 are assigned to stretching and bending modes of adsorbed water. The weak band at 2096.09 cm-1 for BN60 and 2083.42 cm-1 are assigned to a combination band [24]. As for the FTIR spectrum of calcined alumina at 500 C also shows the characteristic bands of stretching and bending modes of water at 3460.71 and 1637.42 cm-1 (FIG. 3b). The absorption peaks observed between 600 and 800 cm-1 in all the samples are attributed to the stretching and vibrational modes of the AlO4, AlO6 and OH groups [25]. The absorption peaks obtained at 1520 and 1406 cm-1 of spectrum FTIR of alumina calcined at 500°C are due to the presence of the carbon-carbon (C-C) deformation.

The adsorption and desorption isotherms of the BN25, BN60 and alumina-γ samples (FIG. 4) can only be type IV with an H3 hysteresis loop. But Fouad et al. [26], as well as S Kirchner et al. [27], have classified this type as Type II isotherm and that this loop of hysteris is due to the presence of pores of slit form. Other researchers [28] have qualified these kinds of isotherms are characteristics of flat-like nanostructures that have slit-shaped pores. And actually, the image provided by SEM shows flat particles at BN60. As a result, the particles of the other samples are also flat. The BJH pore size distribution curves FIG. 4 (BN25), FIG. 4 (BN60) and FIG. 4 (alumina-γ) give pore diameters in the range of 2 and 15 nm centered on the 4.73 nm points for BN60. On the other hand, the size distribution curve of BN25 has an almost bimodal distribution Pore-size distribution of a double pore-size system whose peaks are respectively centered on 3.8 and 6.88 nm. As for the means of pore diameters of the -γ alumina is about 6.15 nm. The narrow and broad pore size bimodal distribution of BN25 indicates a heterogeneous organization and at the same time compact crystallites and aggregates. While the Pore-size distributions (PSD) of BN60 and alumina-γ are only broad, this confers them a heterogeneous organization of crystallites and aggregates. TABLE 1 gives the average pore diameter and total pore volume values according to the BJH method and the Surface BET area. This relatively high value of the specific surface of alumina-γ, in the absence of additives, is a combination of precipitation conditions, the interconversion of amorphous hydroxide and the conditions of supersaturation [29]. According to the IUPAC classification, the mesoporous particles are in the range of (2-50 nm). Thus, the boehmite and alumina obtained are mesoporous. 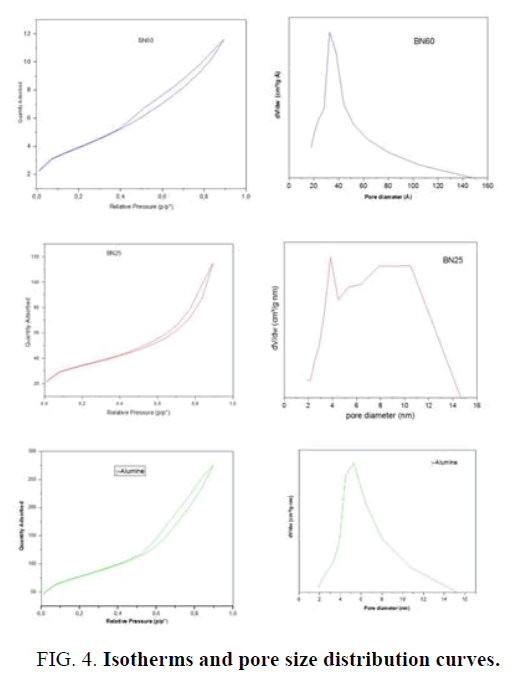 The composition of the pseudoboehmite (γ-AlOOH) BN60 contains a percentage of 0.6% Si, 0.2% Fe, 59.0% O and 40.3% Al (TABLE 2 and FIG. 5). However, the morphology of boehmite was determined using SEM. It is true that the crystallites are difficult to observe, but the SEM image (FIG. 6) shows an aggregate of the flat-shaped particles. So we are in front of a flat morphology of particles. It has been reported that this kind of morphology is due to processes related to boehmite synthesis [30,31].

Figure 5: The EDX spectrum revealing the degree of purity of the gel of BN60 dried at 80°C. By using the alkaline bauxite melting followed by precipitation of the solutions brought to temperatures of 25◦C and 60◦C with simple stirring, we have synthesized respectively an amorphous gel and a boehmite of nano sizes. The conversion to transition alumina of BN60 gave a γ-alumina at 500°C spinel phase and a specific surface area of 272 m2/g. The analyzes of nitrogen isotherms and those of pore size distribution curves confirm that the products obtained at 25°C or 60°C and alumina-γ are mesoporous materials whose particles are flat. These boehmites of high specific surface, synthesized from this simple and inexpensive method, can be used as adsorbents in the field of environmental remediation and good sources of manufacturing industrial catalysts.