The series of heteropoly complexes were prepared by conventional reflux method in the water bath separately by taking Isopoly anions of Mo, V, W. All the products isolated were crystalline in nature appeared as dark yellow products. The chemical as well as physical methods were applied to characterize all the three isolated products the chemical analysis suggests the ionic nature of complexes since the complexes were dissolved in warm water. The inorganic wet analysis suggests ionic nature of sodium as its cation in association with complexes. The IR analysis applied for identification of group frequencies also suggests the ionic nature of sodium for the isolated complexes in solid state. The thermal analysis involving DTA and TGA support the stability of complexes in the atmosphere due to the presence of large no of water of hydration. The magnetic susceptibility analysis supports the paramagnetic nature of all the isolated series of products containing Al3+ and Ce4+ hetero cation. The structure of the heteropoly complexes synthesised may be suggested as Anderson’s structure. The study of elemental analysis and molecular weight determination as well as chemical and physical analysis of the products, the following formula based on the IUPAC system may be proposed as: 1. Na2 (Al2CeMo7O27) 150H2O (sodium-7-molybdo-1-cirate-2 aluminate hydrate) 2. Na2 (Al2CeV4O16) 72H2O (sodium-4 -vanado-1-cirate-2 aluminate hydrate) 3. Na4 (Al2CeW4O19) 177H2O (sodium-4-tungstato-1-citrate-2-aluminate hydrate)

The triheteropoly complex compounds have important application in the field of absorption catalysis due to enhanced solid-state surface area. The contribution of presence of two different hetero cations further increase the surface area of the heteropoly complexes and thermal stability of the product which is evident from the thermal analysis of the entire product synthesised [1]. The chemistry of synthesis of heteropoly complex compound was started quite earlier by Tsigdimos and co-workers [2] in the moderate acidic medium formed with the help of addition of adequate quantity of CH3COOH. As per the literature survey of preparation of triheteropoly complex compounds the preparation of the product based on mixing of proper concentration of sodium tungstate, two different hetero cations aqueous solution and the mixture solution refluxed for about two to three hours at refluxing temperature. The mixture solution after refluxing is left for two to three days and then the lustre brown coloured crystalline residue in solid state was recovered. The condition of moderate acidic medium (~ pH 4.5) is necessary since the concentrated acidic medium or even concentrated alkaline medium may decompose the poly anion of tungsten, molybdenum, or/and vanadium in their respective mono anions. The mechanism of decomposition of poly anion may be shifted through the chemistry of dichromate anion formed from chromate anion in moderate acidic medium.

The triheteropoly anion formed contains oxygen metal bridges commonly known as oxometalate bridges possessing various structures namely Anderson, Anderson-Evans, Keggin, Lindqvist, Well-Dawson, Dexter-Silverton [3] depending upon formulas of the poly hetero complex anions. The most common among the above structure is the Keggin’s structure [4] having polyanion composition [M12O40]n-. The triheteropoly complex compound recovered as solid state lustre brown colour were subject to characterization for the evaluation of the components inserted including the presence of water molecules generally as water of hydration through IR studies [5-15] and the solubility of the triheteropoly complex were about examined through the TGA, DTA analysis [16-21] of the products.

The following experimental procedures were selected for the preparation of the three products namely sodium-7-molybdo-1-cirate-2 aluminate hydrate, sodium-4 -vanado-1-cirate-2 aluminate hydrate, sodium-4-tungstato-1-citrate-2-aluminate hydrate, the water solution 70 ml having 0.36 (M) concentration of sodium molybdate was mixed with 40 ml of aqueous solution of 0.65 molar aluminium carbonate in acidic medium formed by the addition of the 10 ml glacial acetic acid. Now the step wise 60 ml cerium sulphate solution having 0.35 M concentration was added, during addition of cerium sulphate continuous stirring was also performed. Finally, the pH of the entire mixture solution was maintained nearly 4.5 whenever the pH goes above 4.5 the glacial acetic acid were added to maintain the pH of the mixture solution. This mixture solution was refluxed for about three hours. The bright lustre yellow colour solid product was appeared in the bottom of the beaker after three days. This solid product was treated with concentrated alcohol to remove impurities associated with the solid residue and then the product was left to dry. Similarly, other two products were also synthesised by taking sodium meta vanadate and sodium tungstate all the three products now kept for characterization to assign the chemical formulas.

Table 2. The elemental evaluation of the second product for determination of the constituent elements of the complex compound as follows.

The apparent molecular weight based on cryoscopic method evaluation was determined as 4451which is again slightly lower than the formula weight 4456 of the product.

The final results for the characterization of the three products involve IR, DTA and TGA analysis. The IR graph for complex-I indicates broader peaks at 3159 cm-1, 2758.21 cm-1, 2011.51 cm-1, 1624.06 cm-1 and 1408.01 cm-1 indicating the group frequencies due to the presence of water of hydration. It may be possible that some of the peaks among them may be due to the presence of water of crystallization. However, it is difficult to differentiate between the above peaks appeared due to water of hydration or/and water of crystallization. The peak appeared at 1141.36 cm-1 may be visible due to the presence of Mo=O group frequencies again further the peaks at 914.26 cm-1 indicated in the graph assigned to sodium cation of the complex. Another peak appeared at 651.24 cm-1 assigned to Al-O, the 563.21 cm-1 peak indicate the presence of Ce=O and finally the peak at 501.49 cm-1 indicate the group frequency due to existence of Ce-Mo bond.

The DTA graph of the product suggest exothermal decomposition reaction for loss of water molecules and also the other minor extreme graph at 309°C and 527.72°C peak indicates the internal rearrangement of the product. The DTA peak on set at 29.29°C and peak at 68.89°C temperature range 30°C to 140°C support the loss of water of association of the product, apprpox 60% by weight. Another peak at 127.08°C, onset at 108.79°C supports loss of Na2O with further 1.5% loss by weight. The DTA graph supports the loss of entire water molecule associated with product by the strong exothermic peak appeared at 91.23°C which onset at 51.70°C. Loss of Na2O is supported by unnoticed small endothermic peak at about 150°C (Figures 1-9). 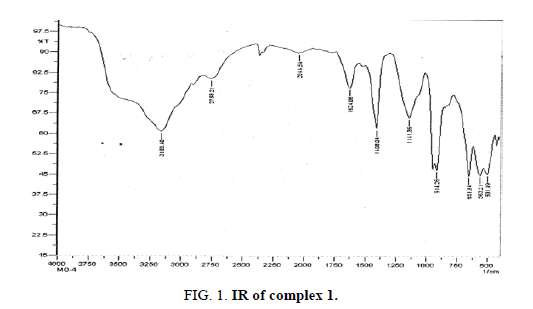 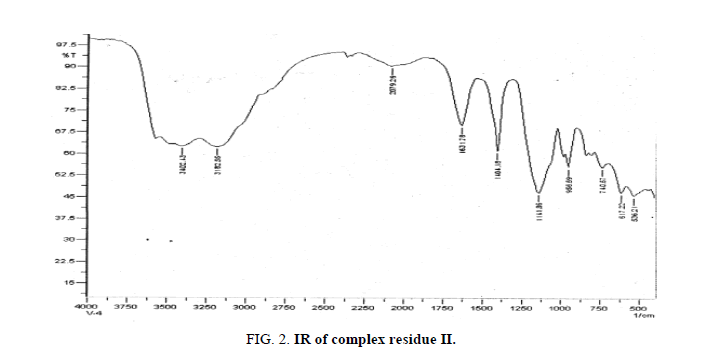 Figure 4: TGA of complex residue I.

Figure 5: DTA of complex residue I. 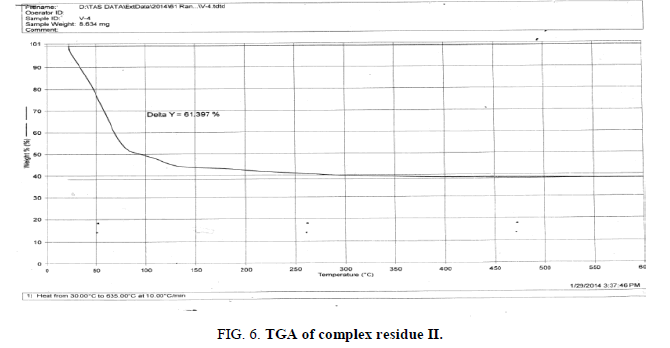 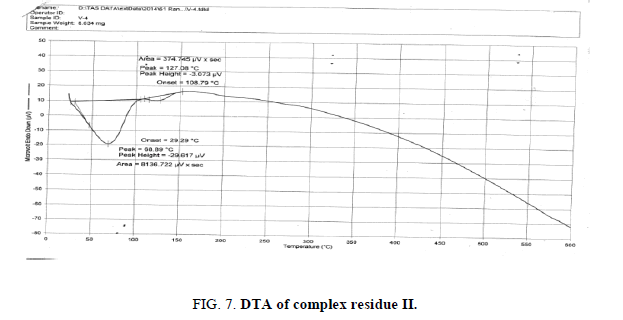 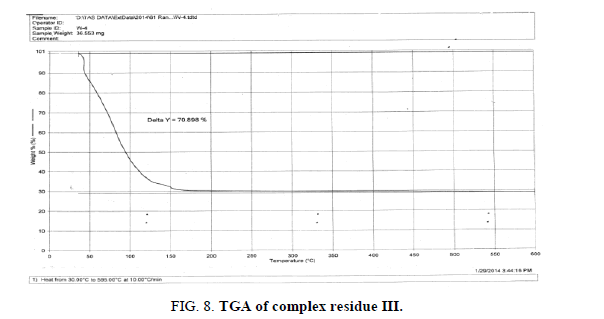 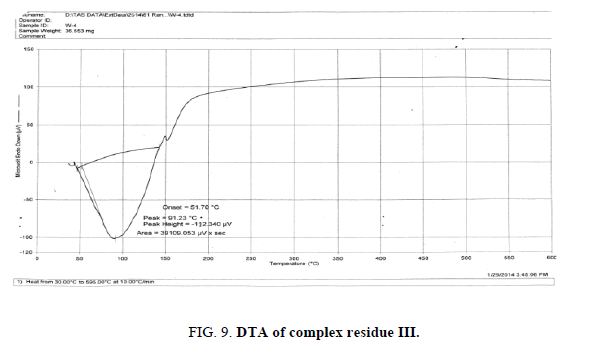 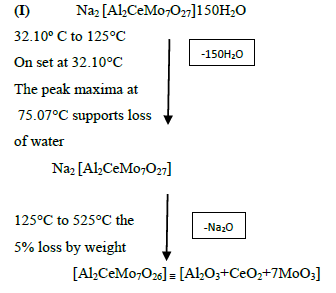 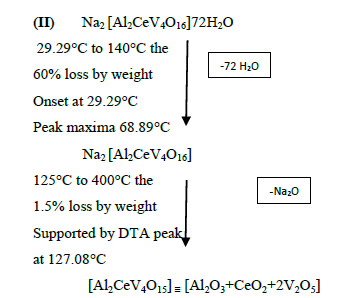 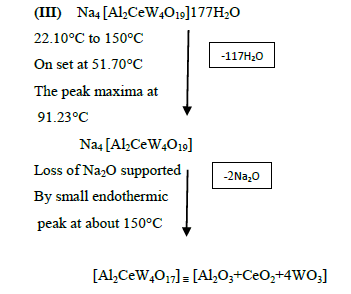 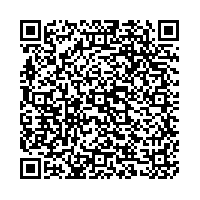