The electrochemical behaviour of xipamide was studied at glassy carbon electrode in Britton-Robinson buffer solution of different pH values ranging from 2.0 to 7.0 using cyclic voltammetry and square wave voltammetry. Voltammetric results showed a reversible redox and diffusion-controlled process. The oxidation and reduction peaks were found at potentials of 0.375 V and 0.321 V at pH 5.0, respectively. While the reported voltammetric method 2 shows irreversible oxidation process for xipamide and having higher detection limit than the proposed method. Linear responses were obtained over concentration ranges of 5.0 × 10-8 to 6.46 × 10-7 mol L-1 and 5.0 × 10-8 to 9.90 × 10-7 mol L-1 with detection limits of 3.97 × 10-9 mol L-1 and 3.30 × 10-9 mol L-1 for oxidation and reduction processes, respectively. Sensitivity, precision and accuracy were evaluated. The proposed method is suitable for the quality control of xipamide in bulk, commercial formulations and urine.

Xipamide (XIP) is a sulfonamide diuretic drug Figure. 1, chemically designated as 5-(Aminosulphonyl)-4-chloro-N-(2,6-dimethylphenyl)-2-hydroxy-benzamide. It is used for the treatment of high blood pressure and edema of cardiac, hepatic, or renal origin. It is a nonthiazide diuretic with a greater natriuretic effect than the thiazides and a less abrupt onset and longer duration of action [1]. 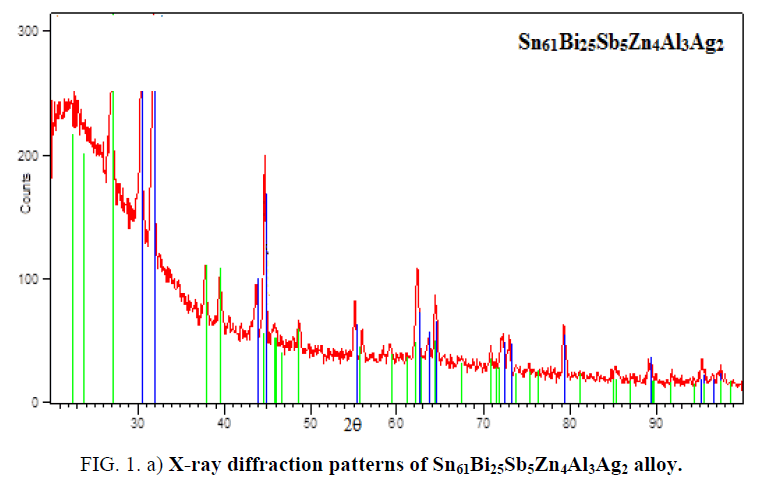 Figure 1: The chemical structure of XIP.

Square wave (SWV) allows the use of faster scan rates than differential pulse (DPV). SWV offers both forward and reverse square wave to the system, that allows desorption of any adsorbed intermediate on the surface. In DPV the working electrode is maintained at the base potential for time approaching a full second to establish a deep diffusion layer before every pulse. This affords very slow scan rates, normally in the range of a few mVs-1. SWV is therefore an inherently faster technique. SWV is also slightly superior to DPV in its ability to reject capacitive charging currents and offers thus an edge in terms of sensitivity. Overall, SWV appears as a highly promising and powerful electrochemical technique [12,13].

The electrochemical treatment or activation of glassy carbon electrode (GCE) is one of the most widely used techniques that are often carried by potentiostatic polarization at a suitable potential or by potential cycling in a wide range. It is believed that the oxidative pretreatment could produce oxygen containing functional groups such as hydroxyl, carbonyl, carboxyl and quinones on carbon surfaces, which are responsible for the improved performances of carbon electrodes [14-17].

GCE was polished with alumina powder to a mirror finish surface. After rinsing with deionized water, GCE was cleaned in an ultrasonic bath for three minutes. Electrochemical pretreatment of GCE was performed by anodic oxidation at +1.5 V for 120 s in Britton-Robinson (BR) buffer solution (pH 5.0). The electrode was then cycled between -1.0 V and +1.0 V at a scan rate of 100 mVs-1 until a stable voltammogram was obtained.

The optimum instrumental conditions for the determination of XIP by using SWV method were chosen from the study of the variation of the peak current with pulse amplitude, frequency and scan rate. During the study, each parameter was changed while the others were kept constant: pulse amplitude over the range from 10 mV to 100 mV, frequency from 10 Hz to 100 Hz and scan rate from 20 mV s-1 to 400 mV s-1.

Determination of XIP in bulk powder

Aliquots of XIP standard solution (1.0 × 10-3 mol L-1) were added to a series of 10 mL volumetric flasks so that the final concentrations are in the range of 5.0 × 10-8 - 9.90 × 10-7 mol L-1, then well mixed and completed to the mark with BR buffer of pH 5.0. Transfer the whole contents of the flask into the voltammetric cell. SWV technique was applied by scanning from 0.0 V to 1.2 V with scan rate of 100 mVs-1. The current (I) was plotted versus the corresponding concentration to get the calibration curve of XIP.

Determination of XIP in tablets

Twenty tablets were accurately weighed and powdered in a mortar. The required amount from the crushed tablets powder was dissolved in about 30 mL of methanol and filtered in 100 mL measuring flask. The residue was washed three times and the volume was completed to the mark by the same solvent. 10 mL of BR buffer (pH 5.0) were introduced into the voltammetric cell and suitable volume of the above tablets solution was pipetted into the buffer in the voltammetric cell. The nominal content of the tablets is calculated using standard addition technique.

Determination of XIP in urine

The urine samples obtained from healthy person were used for measurements. Add 1.0 mL of urine into a series of 10 mL volumetric flasks, and then add different aliquots of XIP standard solution (1.0 × 10-3 mol L-1), mix well and complete to the mark with BR buffer of pH 5.0 to obtain the final concentrations in the range of 5.0 × 10-8 - 9.90 × 10-7 mol L-1. The procedures described under construction of calibration curve were followed.

Tafel region is affected by the electron transfer kinetics between XIP and GCE. The number of electrons transferred (with α=0.5) was calculated to be n=1.05 for oxidation process and n=1.17 reduction process, indicating that n≈1 in case of the redox process of XIP. Tafel plots are composed of an anodic part for positive over potentials and cathodic part for negative over potentials Figure. 2B. The slope of the linear region of Tafel plot can be used to calculate α, oxidation slope=n (1-α) F/2.3RT and reduction slope=- αnF/2.3RT, where F is the faraday's constant (96485 J), R is the universal gas constant (8.314 J K-1 mol-1) and T is equal to 298 K [18]. The calculated α values are 0.38 and 0.66 in case of n=1 for oxidation and reduction processes, respectively. The average value of α=0.52. Hence, only one electron was used in the redox process while in the reported voltammetric method two electrons were used through the irreversible oxidation reaction at CPE [2].

In the reported method XIP shows irreversible oxidation reaction while in our study XIP shows reversible oxidation reaction and suggests that the oxidation occurs at the nitrogen atom of the amide group to produce a cation radical over nitrogen atom showing a great similarity with that observed for the oxidation of propanil and related N-substituted amides [19]. This is followed by water attack as nucleophile to produce 2,6-dimethylaniline and 4-chloro-2-hydroxy-5-sulfamoylbenzoic acid as described in Figure. 3. This clarifies the difference in the peak currents and peak shape of the responses in the forward and reverse directions. 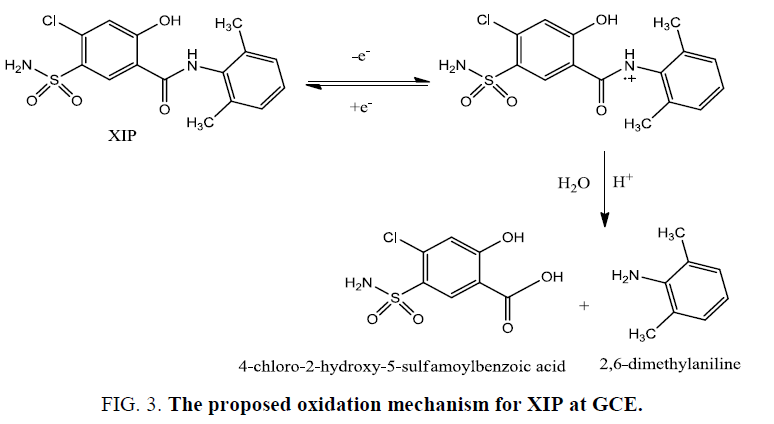 Figure 3: The proposed oxidation mechanism for XIP at GCE.

Figure 4: The proposed oxidation mechanism for XIP at GCE.

The slopes were found to be -53 mV/pH and -48 mV/pH units over the pH range from 2.0 to 7.0, which is close to the theoretical value of -59 mV. This indicated that the number of protons and transferred electrons involved in this mechanism is equal [20-22]. The best results were obtained in BR buffer solution of pH 5.0 and this pH was used in subsequent experiments.

Figure. 5A, shows the cyclic voltammograms of 4.0 × 10-5 mol L-1 XIP in BR buffer of pH 5.0 at GCE using different scan rate (?) values varied from 20 mV s-1 to 460 mV s-1. Figure. 5B, shows linear plots of anodic and cathodic peak currents versus the square root of the scan rate (?1/2) with the linear regression equations as: I (μA)=26.34 ?1/2 -3.055, r (correlation coefficient)=0.9990 and I (μA)=-12.438 ?1/2 + 1.298, r (correlation coefficient)=0.9994 for oxidation and reduction processes, respectively. The results suggest diffusion-controlled process of XIP [23,24]. The following relation used to characterize reversible reaction: ΔEp=Epa-Epc=59/n mV at 298 K [25], the difference between anodic peak potentials and cathodic peak potentials over the entire scan rate range has the average value of 52 mV which emphases that the electrochemical behavior of XIP is reversible reaction process and the number of electrons used in this process is equal to one. Effect of instrumental parameters in SWV

It was found that the values of 20 mV, 50 Hz and 100 mVs-1 were finally chosen for pulse amplitude, frequency and scan rate, respectively to obtain relatively high and narrow peak currents in the determination of XIP.

Determination of XIP in bulk powder

Figure 6: The calibration curve of XIP based on its oxidation using SWV at GCE in BR buffer (pH 5.0), scan rate of 100 mV s-1, amplitude 20 mV and frequency 50 Hz. The inset: The linear relation between XIP concentration and the current responses. 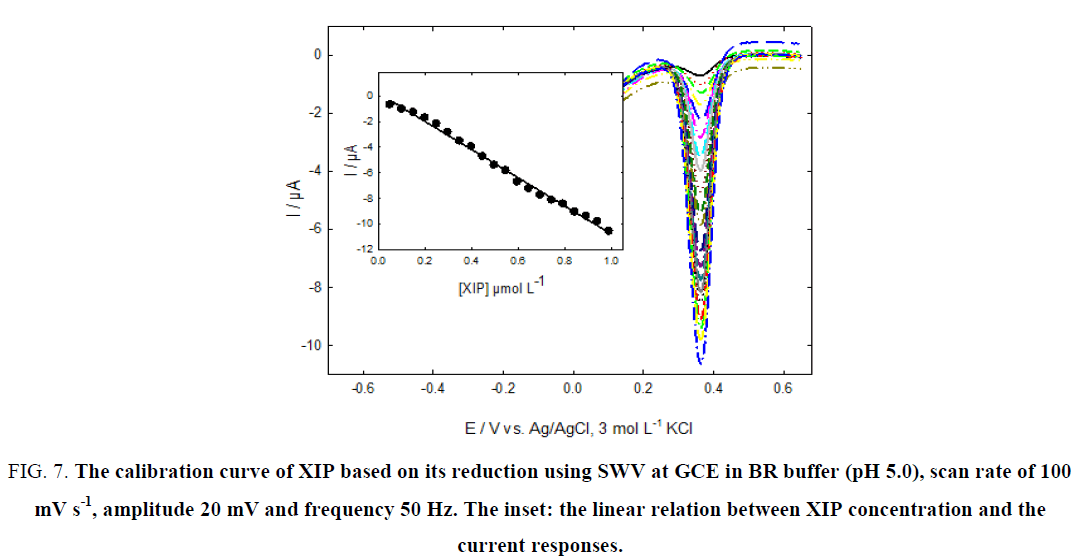 Figure 7: The calibration curve of XIP based on its reduction using SWV at GCE in BR buffer (pH 5.0), scan rate of 100 mV s-1, amplitude 20 mV and frequency 50 Hz. The inset: the linear relation between XIP concentration and the current responses.

The proposed SWV method can be successfully applied to determine XIP in Epitens tablets using standard addition method in the presence of excipients and triamterene (TRI) which is determined by cathodic stripping square wave at mercury electrode which give two irreversible reduction peaks of TRI at -0.65 V and -0.97 [27] and HPLC with electrochemical detection at GCE at 1.3 V [28] while XIP gives oxidation peak at 0.369 V and reduction peak at 0.357 V using SWV indicating the applicability of the proposed method to determine XIP in presence of TRI and excipients emphasized by the good values of percentage recovery and relative standard deviation as shown in Table 2.

The results obtained were compared statistically with those from reported spectrophotometric method [8] by using Student’s t-test and the variance ratio F-test. The results in Table 3, show that the t and F values were smaller than the critical values, indicating that the student t-test and variance ratio F-test excluded any significant differences between the proposed method and the reported method with respect to accuracy and precision.

Table 3: Determination of XIP in Epitens tablets compared with the reported method[8].

Determination of XIP in urine

The applicability of the proposed method to the determination of XIP in spiked human urine samples was investigated in case of oxidation and reduction process, respectively Figure. 8 and 9. The results are satisfactorily accurate, precise and sensitive to determine this drug in urine as shown in Table 4.

Figure 8: The calibration curve of XIP based on its oxidation using SWV in urine at GCE in BR buffer (pH 5.0), scan rate of 100 mV s-1, amplitude 20 mV and frequency 50 Hz. The inset: The linear relation between XIP concentration and the current responses. Figure 9: The calibration curve of XIP based on its reduction using SWV in urine at GCE in BR buffer (pH 5.0), scan rate of 100 mV s-1, amplitude 20 mV and frequency 50 Hz. The inset: The linear relation between XIP concentration and the current responses.

Table 4: The results of the proposed SWV method for determination of XIP in urine.

In this study the electrochemical behavior of XIP differs from that in the reported voltammetric method [2], based on the reversibility, sensitivity and the number of electrons used in the process. The reversible redox behavior of XIP at GCE in BR buffer can be used to determine this drug in bulk drug, dosage forms and urine using SWV method. The procedures were found to be simple, precise, accurate and fast. Analysis of authentic sample containing XIP showed no interference from the excipients and triamterene. The major advantage of the proposed method is that, it does not require a prior extraction step, thus, it is time saving. Moreover, no sophisticated instrumentation is required. Therefore, this method can be conveniently adopted for routine quality control analysis.

The authors would like to express their gratitude to National Organization for Drug Control and Research (NODCAR, Egypt) for providing instruments and the means necessary to accomplish this work. 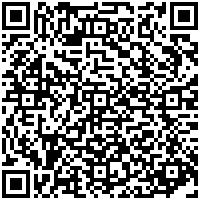