The demand and use of petroleum products are increasing day by day, which in turn accelerates the possibility of accidental spillage of hydrocarbon fuels during transportation, natural seeps or due to routine maintenance of infrastructure. As cleanup of an oil spill is usually difficult and expensive, a cost-effective technique for mitigating the excess petroleum hydrocarbon from the environment is of the utmost need. In this study, the ability of the microorganisms isolated from different oil contaminated sites of Bangladesh has been assessed by examining their degradation potential by using heterogeneous hydrocarbon fuels as substrates. Bushnell-Haas agar (BHA) media was used to isolate and identify the hydrocarbon utilizing bacteria. 10 types of bacterial species were grown on the BHA with 1% petroleum hydrocarbon (petrol/octane/diesel) in liquid form as their sole carbon sources. Isolates were incubated in orbital shaking incubator at 37°C for up to 15 days to determine the hydrocarbon degradation capability. Amount of petroleum degradation was identified by gravimetric analysis, a technique by which the amount of a chemical substance can be determined through the measurement of mass. The prominent petrol degradative bacteria were identified as Pseudomonas spp. (58%). In the case of diesel and octane degradation, Bacillus spp. was found to be more effective, 79% and 54% respectively, compared to the other isolates.

Hydrocarbons are considered to be the primary source of energy throughout the world. Large amount of fuel is required, especially for the transportation, industrial production, and lubrication. [1]. For instance, it has been transported to various geographical locations though the water way and been extensively used for industrial developmental purposes [2]. However, these industrial processes bring about the rise of oil spills which have been considered as a major environmental issue across decades [3,4,1]. Oil contamination became a major concern now-a-days, especially for the marine lives because water bodies are the prime sites of oil spill [1]. Hydrocarbon contaminations are dangerous to animal and plant lives due to their carcinogenic and mutagenic traits [5,6,1,7].

Currently, scientists are looking towards some clean up technologies which can rid us from these long term harmful effects [1,8]. Among the cleanup techniques, the most desired one is the bioremediation. It is relatively effective over other traditional cleanup systems and the entire process is simple [4,9-13]. So far, a wide array of microorganisms including fungi, algae and bacteria are known to degrade Polycyclic Aromatic Hydrocarbons (PAHs) [14-17]. Bacteria plays a major role in complete mineralization of PAHs. [18]. Fungi on the other hand can biologically transform and render them into nontoxic metabolites which can then be acted upon by other organisms [19].

Among the important features of these biodegrading bacteria, bioaugmentation in which the bacterial cultures are added to speed up the degradation rate of a contaminant and the production of biosurfactants is the most significant kind [20-22]. Biosurfactants work as an emulsifier and improve the cellular contact of the hydrocarbon with the bacterial cell which subsequently enhances the biodegradation process [23,5,11]. However, co-contaminating components like heavy metals can interfere with the biodegradation of organic pollutants by posing extra stress on microbial populations [24]. Thus, the isolation of hydrocarbon degrading bacteria from the oil contaminated location represents immense value in the area of environmental safety. Several studies have been reported to isolate and identify bacteria from the oil contaminates region [25,26,13] in different countries, but till date there is lack of report concerning Bangladesh. At the Sela River in Sundarbans an oil spill occurred on 9th December 2014, it is one of the UNESCO World Heritage sites. An oil-tanker (Southern Star VII) which was carrying 350,000 liters of fuel suddenly sunk in the river when a cargo vessel accidentally collided with it. The spilled furnace oil spread over 140 m2 area by 17th December. The shoreline was blackened after the slick spread to a second river and in the vast network of canals in Sundarbans. A large population of trees, planktons, dolphins, and small fishes were facing the threat of extinction due to this horrifying event. The sea ports of Cox’s Bazar, Chittagong and Mongla, Khulna are the prime locations of oil spillage in our country. In addition, large number of fuel pump located in Dhaka city can be a source of hydrocarbon degrading bacteria. Proper Isolation, Identification and characterization of these isolates could reduce the threat of environmental profanation due to their enhanced degradation rate, [8] cost effective procedure and availability in an oil contaminated environment. In these lines, the recent study attempted to isolate and identify the bacteria inhabiting the oil contaminated areas and to quantitatively demonstrate the hydrocarbon degrading ability of those bacterial isolates which can be further used for any bioaugmentation studies during bioremediation in near future.

Estimation of the total bacterial population

Total bacterial population of the collected samples was enumerated by spread plate technique [27]. An amount of 1 g soil sample was measured and aseptically transferred into 9 ml sterile physiological saline. Same procedure was done with 1 ml of water samples which were collected from different locations. Then they were transferred into a series of 8-fold dilutions using physiological saline. Spread plate method was applied to enumerate the total bacterial load [27]. The plates were incubated at 37°C for 24 h. The average numbers of bacteria present in the samples were recorded.

Bushnell Haas agar with the composition of (per litter of distilled water) 0.02 g of MgSO4.7H2O, 0.02 g of CaCl2 , 1 g of KH2PO4, 1 g of K2HPO4, 1 g of NH4NO3, 2 drops of 60% FeCl3 was used for cultivation of HDB population. In the case of salt water samples, the medium was supplemented with 2% NaCl for supporting the growth of marine bacteria [21]. In sterile Bushnell Haas agar (BHA) plates, an amount of 0.1 ml sterile fuels (petrol/octane/diesel) was spread using a sterile glass rod. The fuels were sterilized by using 0.22 μm membrane filter. Then 0.1 ml of each samples were inoculated and spread on BHA [10]. The plates were incubated at 37°C. Only petroleum degrading bacteria were grown on the plates because the carbon sources present in this medium were limited to petrol/octane/diesel and organisms which are able to utilize them will only be able to survive in that environment.

Identification of petroleum (petrol/octane/diesel) degraders: The petroleum degraders were identified by several conventional microscopic and biochemical tests [28] according to Bergy’s manual (Table 1). Some morphological characteristics including cell morphology, colony morphology and structural appearances were also observed and recorded.

Petroleum (petrol/octane/diesel) degradation assay: The cultures isolated from BHA were used as inoculums for the petroleum degradation assay. Erlenmeyer flasks (250 ml) were taken for each of the isolates and 100 ml of Bushnell Haas broth medium was transferred to each flask and sterilized [15]. Exactly 1% petroleum (petrol/octane/diesel) were used as the sole carbon source and incubated in orbital shaker incubator at 37°C at 125 rpm for up to 15 days for screening fuel degradation rate. The rate of petroleum degradation was estimated by gravimetric assay, at every 5 days interval [15,10,29]. After desired incubation period, 1% 1 N HCl was added to each flask to stop the bacterial activity. To extract the fuels, culture broth was poured into a separating funnel containing petroleum ether: acetone (1:1) and mixed intensively to get a single emulsified layer. More acetone was added to break the emulsification and three separate layers were formed. Two bottom layers were disposed because only the top layer supposed to contain the desired petroleum mixed with petroleum ether and acetone. The top layer was collected in a pre-weighed beaker. The beaker containing the oil mixed with acetone and petroleum ether was placed in water bath and the organic extractant allowed evaporating at 50°C. The beaker was then cooled down and weighted again. The percentage of fuel degraded was calculated as follows:

All of the screening experiments were done five times and the average values were plotted to make a graph, in order to assess the rate of hydrocarbon degradation.

The current study made an effort to isolate and identify the microorganisms living in the oil contaminated regions where they would not only survive but also thrive by utilizing petroleum hydrocarbons as one of their primary sources of energy. Quantitative degradability of those bacterial isolates against various forms of hydrocarbons were also assessed in this study which can additionally be used for any bioremediation studies in near future (Figure. 1). Figure 1: A map of Bangladesh showing different petroleum contaminates sites from which the water and soil samples were collected.

As per present study, the total heterotrophic bacterial count of the tested samples showed a significant presence of heterotrophic organism. The soil sample showed highest count (2.1 × 106 cfu/g) among them which is quite expected as soil is considered as one of the major reservoir of microorganisms. One of the two samples showed lesser amount of bacterial population in them.

Microorganisms are demonstrated as the major hydrocarbon degraders in any contaminated ecosystem [30,20]. In current study, after inoculation and incubation of the samples in petroleum hydrocarbon containing medium, a total of 10 isolates were observed to grow on the plates (Table 2). Among the isolated bacterial types, predominating isolates were identified as Pseudomonas spp. and Staphylococcus spp., other genera such as Bacillus spp., Micrococcus spp. and Streptococcus spp. were also identified according to their microscopic and biochemical characteristics.

According to Varghese [7], Jyothi et al. [10] and Ganesh et al. [5] diesel degradation is mainly done by the gram-positive bacteria. In this study, we found 70% of the hydrocarbon degraders are gram positive and only 30% composed of gram negative organism (Figure. 2). Other researches also support this data which demonstrate the high efficiency of gram positive bacteria in petroleum degradation [31-33]. However, Subathra et al. [17] evidenced the predominance (62.34%) of gram negative bacteria among the total hydrocarbon degraders. Our study also demonstrated that the petrol was remarkably degraded by gram negative Pseudomonas spp. (58%). 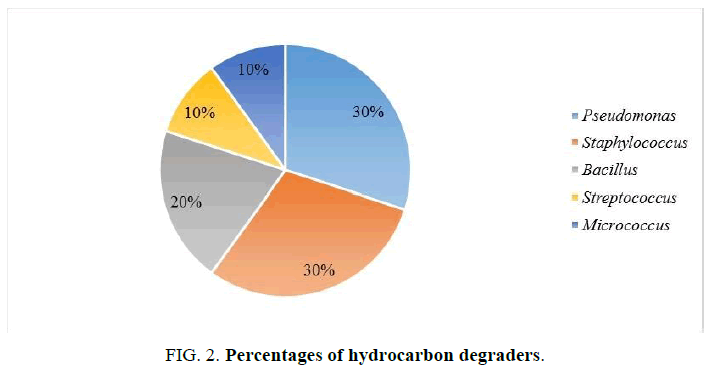 The necessity of an approach is imminent, by which petroleum contaminated sites can be cleaned up using cost effective and ecofriendly decontamination process. “Biodegradation” is one of the most efficient approaches available in order to diminish the biodegradable contaminants. This technique possesses less threats to contaminated sites and less expensive than other conventional methods [8].

Microorganisms are exceptionally assorted and many of them have the ability to break down and utilize complex organic pollutants such as petroleum hydrocarbon [37,34,35,21,8] by using various kinds of degradative enzymes. Not only bacteria but cyanobacteria, green algae, and fungi can also degrade petroleum under diverse environmental circumstances by chronological metabolism of the hydrocarbon compounds [8].

A number of earlier studies revealed the hydrocarbon degradability of some bacterial isolates such as Bacillus spp. and Pseudomonas spp. where they were proven to be the most prominent degraders of hydrocarbon compounds [34,35,21]. The current study also demonstrated the effective degradative capability of these microorganisms. As bioremediation is a cost-effective way of decontamination, it can be used for such scenarios in underdeveloped or developing countries in future for its flexibility, reproducibility, accessibility as well as eco-friendliness.

This study was conducted to isolate and identify those microorganisms which are naturally found in the oil contaminated sites and has the ability to breakdown petroleum hydrocarbon. As we know that among all the microbes, Pseudomonas spp. are one of the most efficient petroleum hydrocarbon degraders due to their enzymatic activity and their capability to adapt in any condition. In this study Bacillus spp. and Pseudomonas spp. were identified as the most efficient petroleum hydrocarbon degraders among all the other species of microorganisms found naturally in the oil contaminated sites around Bangladesh. In future, these organisms can be used to remediate oil contaminated sites, because this process is less costly, ecofriendly, and have a higher public acceptability compared to other processes. This study can also focus on further economical industrial production of native bacterial strains for petrol, diesel, and octane degradation. However, because this is a natural decontamination process, sometimes it requires a huge amount of time but having this drawback, bioremediation is safer than any other means of treatment available today.

The authors have declared no conflict of interest. 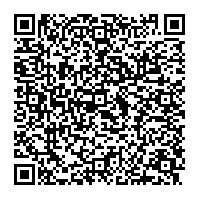