Due to the great applications, compounds with high nonlinear optical properties in the fields of optoelectronic and photonic devices, especially generation of optical harmonics, the scientists were attracted to investigate about m`aterial with high NLO properties [1-7]. There are many effective agents for enhancing the NLO properties such as: Electron donor and recipient groups, establishment of electron II, doping atom and etc. in original molecule [8-11]. Discovery of carbon nanotube [12] made a significant revolution in science and technology of nanomaterials. Scientists became interested to explore their new types of nanomaterial with unique properties and different functionalities. It has been shown that homologues of fullerene molecules have excellent applications in electronic devices, imaging materials, magnetic recording, and environmental processes; so, their investigation will be very interesting [13-16]. Theoretically, it is shown that, between different types of (XY)n structures, the nanocages with the general formula of (XY)12 have the most stable clusters [17-20] which employ in various application. To enhance the NLO properties of X12Y12 nanoclusters many efforts were done [21,22]. Recently, the effect of transition metals atoms doping on geometric, electronic, linear and nonlinear optical properties of Mg12O12 nanocage was investigated and it was shown that the first hyperpolarizability of Mg12O12 nanoclusters significantly enhanced through doping with transition metal atoms [23]. In present study, in the similar way, the effect of transition metal doping on Be12O12 nanocluster was studied. Calculation of the energies of the singlet excited states using time-dependent density functional (TD-DFT) method is the benefit of this research in comparison of previous research.

In this paper, all theoretical computations were done using density functional theory (DFT) with Gaussian 09 package [24]. All optimization calculations for considered nanocluster structures Be12O12 and Be11XO12 (X= transition metals atom) in ground state and excited state were calculated by B3LYP method in 6-31+g(d) basis set. Vertical energies of the singlet excited states were calculated using time-dependent density functional (TD-DFT) method at the B3LYP/6-31+g(d) level. The values of < S2> are 0.750 for a pure doublet and 0 for pure singlet systems, after spin annihilation. Recently has been developed for long-range interaction and charge transfer systems, a new density functional CAM-B3LYP [25,26] that can be useful for (hyper) polarizabilities calculations [27,28] and for considered nanocluster structures linear and non-linear optic properties and hyperpolarization were investigated.

We used CAM-B3LYP method in 6-31+g(d) level for determination of first hyperpolarizibility. The electronic properties of the considered nanocluster such as: the values of energies of HOMO (the highest occupied molecular orbital; EHOMO), LUMO (lowest unoccupied molecular orbital; ELUMO) and the energy gap (Eg) difference of between HOMO and LUMO levels as a critical parameter to determine molecular electrical transport properties investigated through their density of states (DOS) spectra obtained from GaussSum program [29].

Where Eg is the energy gap, EHOMO and ELUMO are the values of energie of the highest and the lowest occupied molecular orbitals, respectively (in Ev).

The energy of an uncharged liner molecule in a weak and homogeneous external electric field can be defined as Eq. (2) [30,31].

All structures, Be12O12 and Be11XO12 (X= transition metals atom), were optimized in the ground state by B3LYP method and in 6-31+g(d) basis set (Figure. 1). Be12O12 nanocluster consist of square and hexagon rings that alternatively the Be atoms connected to O atoms. The Be–O and Be–Be bonds length in square ring were analyzed for pure Be12O12.

The Be–O and Be–Be bonds length were calculated and obtained 1.577 and 2.048 angstrom in pure Be12O12, respectively. Then, one of the Beryllium atoms in square ring was substituted with transition metals atom and subsequent their structures were optimized. The optimized structures of the Be12O12 and doped nanoclusters with transition metals are presented in Figure. 1.

The variations maximum of bond length in among all of X-Be bonds appear for Sc-Be bond and Ni-Be bond length has the variations minimum; they were calculated 2.540 and 2.354 angstrom, respectively. Similarly, X-O bond length was increased for all doped atoms with transition metal.

The maximum value was assigned to Sc-O bond and minimum value was calculated for Ni-O bond. Owing to TABLE. 1 Be-O bond length in Be11XO12 was shown negligible changes. The O–Be–O angle was equal to 98.2 degree. The bond angles for all of doped Be12O12 nanocluster were decreased. The minimum decrement was assigned to O–Cu–O (88.539 degree) and maximum decrement occurs at O–Sc–O (77.346 degree).

The Be-X, Be-O and Be–Be bonds length and bond angles of O-X-O for square ring, are listed in TABLE 1 and depicted in Figure. 1.

The obtained DOS spectrums are shown in Figure. 1. The Obtained EHOMO, ELUMO and Eg values from DOS spectrum (FIG. 1) are listed in TABLE 2. Energy gap for Be12O12 was about 7.60 ev (Be12O12 is an intrinsic semiconductor material because of large gap bond). As can be seen in TABLE 2, substitution 1 Be atom with 1 X atom (transition metals) in Be12O12 nanocluster leads to decreasing of HOMO-LUMO energy gap (Eg) so that it is transformed from an intrinsic semiconductor (Eg≈7.60 eV) to a p-type one (Eg≈2.43eV). The least of Eg value among all considered clusters about 2.18 ev and it belongs to Be11ScO12. The plot of Eg as a function of atomic number (z) indicates in Figure. 2.

Figure 2: The changes of energy gap (Eg) as function of atomic number of the doped transition metal atom (Z) for all considered nano clusters Be11XO12 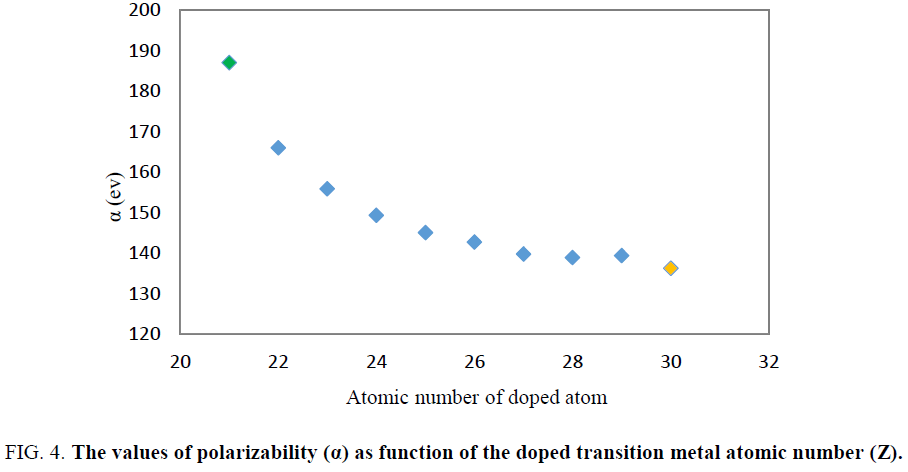 Figure 4: The values of polarizability (α) as function of the doped transition metal atomic number (Z). 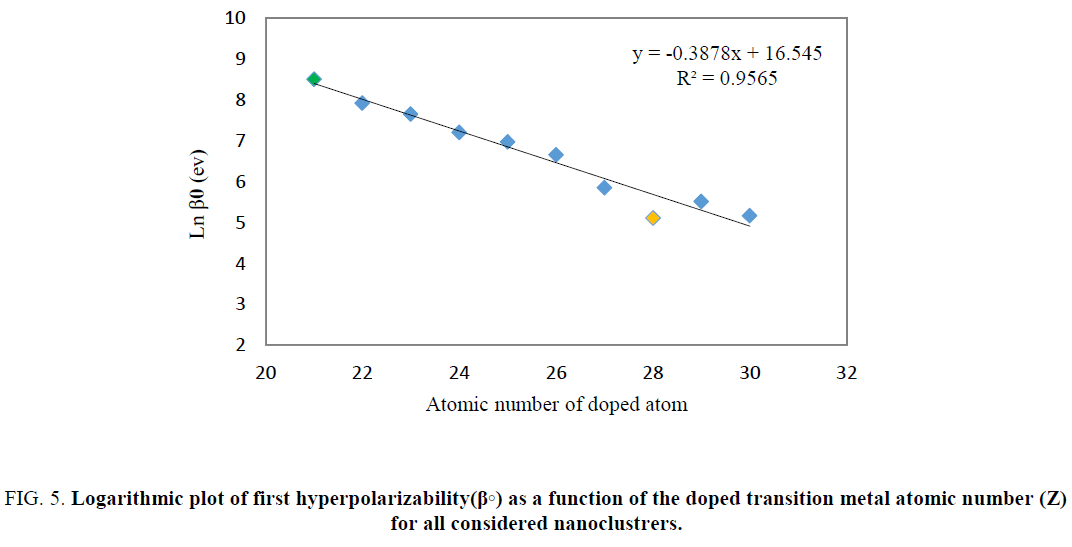 Figure 5: Logarithmic plot of first hyperpolarizability(β?) as a function of the doped transition metal atomic number (Z) for all considered nanoclustrers.

To understand how doping of different transition metals effect on the β0 values of Be12O12, the widely common two-level model is considered as [34-37]:

where ΔE, f0 and Δμ are the transition energy, oscillator strength, and difference in the dipole moments between the ground state and the crucial excited state with the largest oscillator strength. In this model, the third power of the transition energy is reversely proportional to the β0 value; therefore the transition energy is the noteworthy factor in the first hyperpolarizability. The fraction of Δμ.f/ΔE3 in Eq 6, voluntary named as β2. The crucial transition excited state is provided using the time-dependent density functional theory (TD-DFT) calculations at CAM-B3LYP/6-31+G(d) level of theory. The obtained values of ΔE, λ (wavelength of adsorbed light), f0, Δμ and the β2 as well as ln (β0) are presented in TABLE 3.

TABLE. 3. The first hyperpolarizability (β0), the transition energy (ΔE), the difference of dipole moment (Δμ) between the ground state and the crucial excited state, the largest oscillator strength (f) of the considered nanoclusters.

Figure 6: The plot of first hyperpolarizability (β?) and transition energy as function of the doped transition metal atomic number (Z) for all considered nanoclustrers. 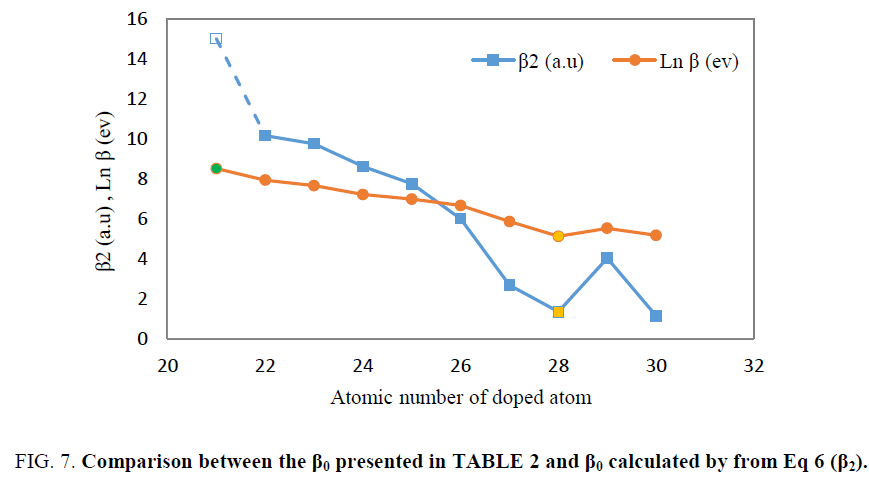 Figure 7: Comparison between the β0 presented in TABLE 2 and β0 calculated by from Eq 6 (β2).

As illustrated in Figure. 7, logarithm of first hyperpolarizabilty calculated by ab initio calculation has same behavior as β0 obtained from Eq 6.

The aim of this study was to evaluate the effect of doping transition metals atom on the structural, electronic, linear and nonlinear optical properties of Be12O12 nanocluster by density functional theory (DFT) methods. The main conclusions of this paper can be summarized as follows:

4. The two-level model proposes that the considerable increment of β0 is mainly due to the ΔE values. Additionally, the TD-DFT calculation indicates that the first hyperpolarizability has similar behavior as β2 and inverse of ΔE3.

5. The doping process of transition metals atom in the Be12O12 nanocluster plays an important role in enhancing the first hyperpolarizability and leads to the NLO response.