Chromones are found to be natural or natural origin. Several studies have been performed on the types of reagents utilized for the cyclization of chalcones to chromene-4-ones. Chromones are recognized as pharmacophores having a number of biological activities such as anticancer, antiviral, antifungal, antimicrobial, antioxidant, antidepressant and antiobesity etc. There are various synthetic methods reported. Therapeutic potential and brief discussion on synthesis of chromones are reviewed.

Chromone moiety forms the important component of pharmacophores of a number of biologically active molecules having synthetic or natural origin and many of them have useful medicinal applications. Chromones are the hetrocyclic compounds with benzopyron network with substituted keto group on pyron ring. Chromone is an isomer of coumarin. Chromone derivatives have a number of biological activities such as anticancer, antihypertensive, antiviral, antifungal, antimicrobial, antioxidant, antidepressant, anti-obesity. These derivatives also possess enzymetic inhibition properties towards different systems such as oxidoreductase, kinase, lipoxygenase and cycloxygenase.

The most conventional and common method for the cyclization is through an oxidative ring closure with bromine and a base or by refluxing with SeO2 in dioxane [1]. In the reaction of chalcone with bromine, besides bromine addition to the olefinic bond, nuclear bromination at position 5 also occurs resulting in the bromoflavone [2] Chalcone dibromide is converted into chromone by the action of pyridine [3]. Ray and Dutta converted chalcone dibromide into the corresponding chromone by heating above the melting point [4]. Rao et al. studied the cyclization of chalcones with DDQ and found that even a slight variation in reaction conditions led to the formation of a mixture of chromone and chroman-4-one [5].

Ganguly et al. prepared 3-acylchromones through a modified Baker-Venkataraman rearrangement using DBU and pyridine via a triketo intermediate [13] these 3-acylflavones were then converted into chromones by refluxing with aqueous K2CO3. Similarly, Pinto et al. used K2CO3-pyridine under microwave assisted conditions to prepare β-diketone intermediates, which were cyclized to give 3-aroylchromones [14].

A synthesis of flavones from ortho-methoxy acetophenones via a two-step process, which utilizes only 1 equiv of LDA to form the lithium enolate has also been reported. The enolate is reacted with benzoyl cyanide to give β-diketone, which on treatment with HI yields the chromones [15]. Creuzet et al. conventionally prepared 3-Hydroxychromones from a methoxy- or benzyloxy-o-hydroxyacetophenone via Baker-Venkataraman rearrangement forming the b-diketones, which undergo cyclization [16,17].

Hageman et al. synthesized 3-Hydroxychromones from chalcones. In this method, o-hydroxychalcone was subjected to base catalyzed epoxidation of the conjugated double bond [Algar-Flynn-Oyamada (AFO)] oxidation followed by ring closure and aromatization to yield hydroxyl chromones [18].

Auwers et al. reported the synthesis of 3-hydroxychromones from aurone via a series of reactions commonly known as the Auwers synthesis [19]. Bromination of the alkene yields a dibromo adduct, which rearranges to hydroxychromone by treatment with KOH via various intermediates. The 4-O-alkyl-derivatives of 5, 7-dihydroxy-chromones were prepared by cyclization of the corresponding chalcones with sodium acetate followed by oxidation of the crude intermediates (chroman-4-ones) with a catalytic amount of iodine in pyridine [20].

7-O-alkyl derivatives of chromones have been prepared by various workers. Babu et al. prepared 7-O-alkylated derivatives of chrysin, (5, 7-dihydroxychromones) having antibacterial activity using alkyl halides and K2CO3 [21]. Shin et al. also attempted to synthesize regioselective 7-O-alkyl derivatives of chrysin using K2CO3 or KHCO3, but obtained a mixture of mono- and di-O-alkylated products [22]. They successfully tried to form 7-O-esters using DCC and DMAP. It was concluded that esterification occured primarily at C7 because of the shielding of the 5-hydroxy by the 4-keto group.

Jain et al. also attempted nuclear iso-prenylation of chrysin by refluxing it with prenyl bromide, but the results were not satisfactory due to poor yields [23] Comte et al. prepared C-prenylated chromones in low yields by microwave irradiation on a solution of chrysin and tetramethyl ammonium hydroxide in methanol containing tetraethylammonium iodide [24].

A series of bromo-substituted 3-aroyl flavanones and flavones have been synthesized [27]. The identities of the new compounds synthesized have been developed on the basis of usual chemical transformation and IR, NMR spectral studies. The diisochromenochromen-4-one has been prepared from the photocyclization reaction of bischromen-4-one. The later compounds are obtained from the O-alkylation of the suitable 3-hydroxy-2-aryl-4H-chromen-4-one with bischloromethyldiphenyl in dry acetone, anhydrous K2CO3, and PTC (Bu4N+I−) under refluxing conditions [28].

Bingi et al. synthesized a number of 3-hydroxy-6-(hydroxymethyl)-2-(2-phenyl-4H-chromen-4-yl)-4H-pyran-4-ones in a one pot catalyst free reaction of 2-hydroxy chalcone with kojic acid in toluene at reflux temperature and studied their biological activities. The compounds showed potent antimicrobial activity against various strains of bacteria [32].

Hatzade et al. attempted a convenient route to synthesis 7-O-β-D-glucopyranosyloxy-3-(3-oxo-3-arylprop-1-enyl)-4Hchromene- 4-ones. These compounds were evaluated for antibacterial and antifungal activities [33].

Kale et al. synthesized and characterized some of the chromone derivatives as antimicrobial agents (Figure 1) [36]. 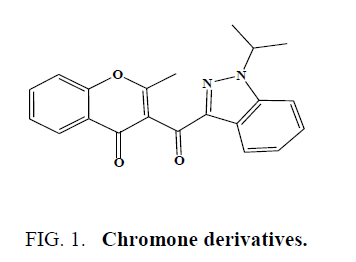 Chromone conjugated dithiazoles and 4-oxo-4H-chromene-3- carbothioic-N-phenylamides were synthesized and screened for antibacterial and antifungal by disk-diffusion assay. The dithiazole derivative (Figure 2a) bearing electron withdrawing (-F, - Cl) groups at C6 and C7 positions shows high antifungal activity in comparison to fluconazole. For Gram Positive bacteria S. aureus, maximum growth inhibition of 92.72% was observed for in Figure 2b [37].

Ibrahima coworkers synthesized new nitrogen heterocyclic systems combining chromone moiety with 1,2,4-triazole or 1,2,4 triazine in one molecular frame through an azomethine linkage and evaluated in vitro for their antimicrobial activities, using the disc-agar diffusion method, against S. aureus and Streptococcus pyogenes as Gram positive bacteria, Pseudomonas fluorescens and Pseudomonas phaseolicola as Gram-negative bacteria, and the fungi F. oxysporum and A. fumigatus [41]. Compounds showed high activity toward the tested fungi. (Figure 5a and 5b).

Liu T et al. synthesized chromone analogues bearing heterocyclic thioether moiety and were assayed for their antitumor activity. Out of these, IC50 of 3- (benzothiazole-2-ylsulfanyl)-chromen-4-one against MDA-MB-435S was found out to be 17.2 μM. They concluded that the presence of heterocyclic thioether or cyclic tertiary amine will benefit the antitumor activities of chromones [42]. 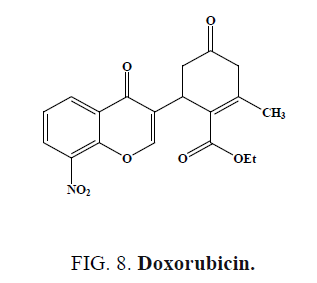 Casano et al. developed and synthesized a series of methoxy flavones and studied their antiproliferative activity on Plasmodium falciparum parasites and anti-HIV activity. Methoxyflavone (Figure 9a) was active in both P. Falciparum and HIV-1 whereas compounds (Figure 9b) and (Figure 9c) were specific inhibitors of the HIV-2 multiplication. Author suggested that para substitution on the B ring is needed to promote antiplasmodial activity and increase HIV-2 potency [52]. 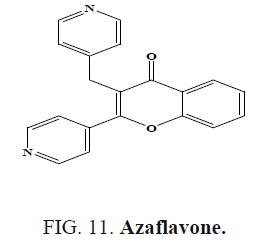 Following Figure 13a and 13b chromone showed 100% protection of 300 mg/kg in scPTZ test. In the MES test, all the tested compounds were inactive showing no protection against the seizures induced even up to a dose of 300 mg/kg body weight.

Highest activity was found, when the 2-amino substituent of tested chromones (Figure 14) was a diethylamino group Activity was increased, when the presence of electron releasing substituents (-OH, -OCH3, -CH3) was at position 7, whereas a decrease occurred when an electron withdrawing substituent was present in position (3-NO2) or (6-NO2, 6-Cl). 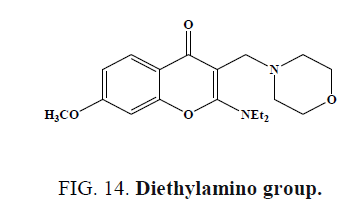 9-and 6-Alkylaminomethyl furochromones (Figure 15) synthesized from the naturally occurring chromones visnagin and khellin were screened for gastroprotective activity in the rat ethanol-induced damage model. The presence of methoxy group (either in 4, 9 or 7-position as methoxyphenyl) and through the appropriate substitution in 6-position with alkylaminomethyl group, furochromones exhibited good gastroprotective activity in the ethanol damage model. 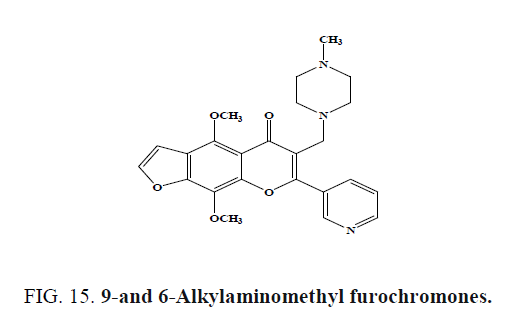 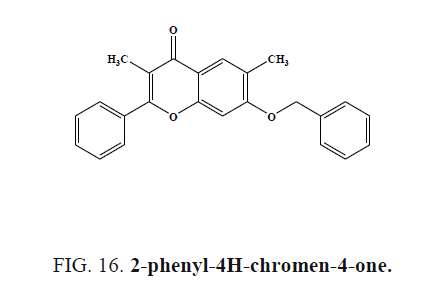 Wu et al. synthesized 3-Phenylflavonoxy propanolamines (Figure 17a and 17b) and evaluated for potential antihypertensive activity in spontaneously hypertensive rats as well as for in vivo and in vitro evidence of β-adrenoceptor antagonism. Compounds were active in lowering blood pressure at 8 mg/kg.

Lee et al. prepared chromone carboxamide derivatives and evaluated for m-calpain inhibition using a casein-coomassie blue microplate assay. Compound (Figure 18c), was the most potent calpain inhibitor of this series (IC50¼ 0.24 mM), exhibited 14.4% and 22.4% inhibition, demonstrating high selectivity of chromone derivatives for m-calpain. The introduction of dioxane ring in the chromone ring generally resulted in the decreased inhibitory activity of the parent compound, irrespective of amide; however, amide substituents were also important in the activity.

The compounds (Figure 18) possessing benzyl and phenethyl amide showed good inhibition of m-calpain, while the potencies were decreased about 10-fold when these substituents were replaced by 2-(morpholin-4-yl) ethyl or isopropyl amide. 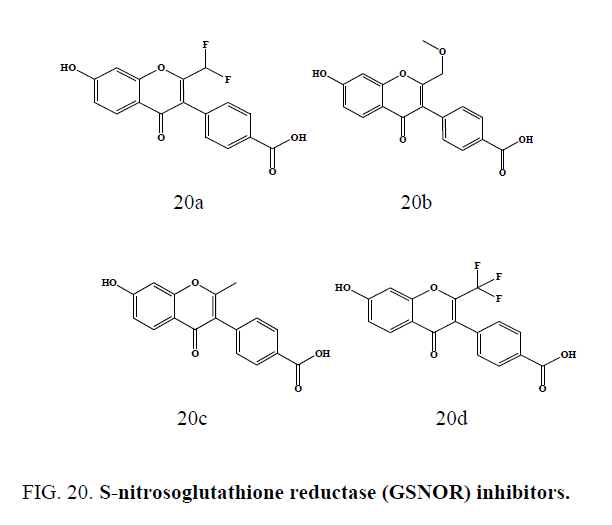 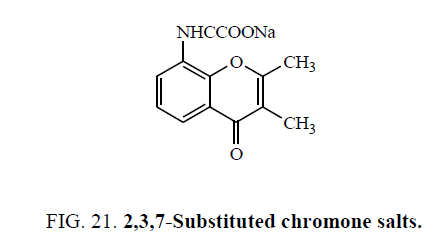 Therapeutic potential and synthetic brief of chromones are reviewed. There have been several synthetic methods developed. Noticeably, cyclization of chalcones to chromene-4-ones is one of the most utilized synthetic tools used in the synthesis of chromones. These moieties are recognized as pharmacophores having a number of biological activities such as anticancer, antiviral, antifungal, antimicrobial, antioxidant, antidepressant, anti-HIV and antiobesity etc.

The authors are thankful to the managements of Dr. Ambedkar College, Nagpur and Amity University, Lucknow campus for supporting this research work. Two of the authors, JP and AK are thankful to DST, New Delhi for financial support (Grant registration# CS-236/2013). 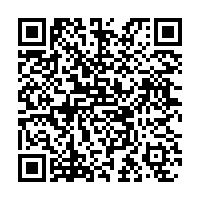