Ferulago carduchorum Boiss &HAUSSKN is a perennial herb from Apiaceae family indigenous to Iran. In this study, in order to investigate phytochemicals on coumarins, the root powder of this plant was extracted by solvents of n-hexane, dichloromethane and methanol in a succession machine. The hexaenoic extract was fractionated by VLC technique. After a preliminary test with an analytical TLC technique, the best fraction was introduced into the thin layer of parathyroid chromatography, the product of which was a linear furanocoumarine named as prantchimgin. The chemical structure of this compound was determined by spectroscopic techniques NMR. With the obtained information, this is the first report on F. Carduchorum rootstock phytochemicals that were considered to be biologically relate to the presence of furanocomarins. The plant’s aerial parts essential oil was obtained by water distillation method and analyzed by GC / MS device. The results showed that, the main components of the essential oil were octan (25.29%), gamma-terpinene (6.34), α-pinene (4.47%), decane (3.71%), α terpinene (2.84%) and sabinene (1.16).

Ferulago is a genus from Apiaceae family; there are 35 species of this genus in the world, some of which are found in Iran, including F. stellata, F. angulata, F. macrocarpa, F. subvelutina, F. bernardi, F. phialocarpa, F. contracta and F. carduchorum [1,2]. In Turkey a number of Ferulago species have been used as sedative, tonic, aphrodisiac, remedy of digestive pains and hemorrhoid [3]. Furthermore some species of this genus are benefit for diseases of spleen, headache, ulcers and snake-bites [4,5].

Ferulago carduchorum, Boiss and Hausskn (Apiaceae) known as an endemic plant of Iran, grows in west part of Iran [6]. In west of Iran, F. carduchorum has been traditionally added to dairy and oil ghee to increase hold time and give them a pleasant taste [7]. In the past, this plant was used as natural preservative to delay expiration date of meat, too [8].

In Phytochemical studies on the Ferulago carduchorum (BOYSS, HAUSSKN), different types of Comarnin and Furanocomarin compounds have been identified as having anecdotal and antioxidant property [9]. Since in some sources (BOİSS & HAUSSKN) Ferulago carduchorum is introduced as an independent species and in some others it is referred to as a subspecies of Ferulago angulata, therefore, the study of the chemical composition of this plant and its comparison with Ferulago angulate can be helpful for solving taxonomic problems. It is also possible that Ferulago carduchorum (BOYSS & HAUSSKN) contains several secondary metabolites, including coumarin and furanocomarin compounds that have significant drug effects, so the phytochemical study of this plant can lead to the identification of new types of coumarins and furanocomarins [10].

Collection and identification of the plant

Getting started in the photochemistry is collecting healthy plants at the right time from the natural arena. Chowilla (Ferulago carduchorum (BOYSS, HAUSSKN)) is collected from the height of 2200 meters from the Bijan Cape in Dena Mountain in Kohkiluyeh and Boyer Ahmad province and was identified by Dr. Seyyed Mehdi Razavi [11].

Preparation of plant sample: The sample was dried under laboratory conditions in a dry and humid environment, away from sunshine and at room temperature. Then the plant root and aerial parts were isolated and individually minced by masonry and powdered.

Extraction and fractionation of extracts

160 g of root extract powder was poured into the cartridge of the extractor and respectively extracted with n- hexane solvent, for separation of semi-polar materials at 70°C for 2 weeks, with di-gromathane solvent for separation of semi-polar materials for 4 days At 40°C and with methanol solvent for separation of the polar material for 1 week at 70°C. Then, each of the extracts was condensed separately at low temperature under vacuum conditions by the operator's rotary device. For preliminary examination of the extracts, thin layer chromatography (TLC) with a 95: 5 chloroform/acetone solvent system was used and the n-hexane extract was detected to maintain proper purification steps. In the next step, using the liquid chromatography technique, the components of fraction fractionated. 3 g of hexane extract was dissolved in about 1 cc of chloroform and mixed with some silica gel D to form solid powder. Then, the solid powder was poured on chromatography column and 100 cc of solvent composition with gradient concentrations of hexane-ethyl acetate were prepared and each of them was poured onto the column separately and collected through a funnel. Among the obtained fractions by performing an analytical TLC with a 97: 3 chloroform/acetone, 60% fraction were investigated and 60% hexane fraction was detected for continuing work. This fraction was purified by using a Preparative TLC technique with 91: 9 chloroform/acetone solvent systems to extract a secondary metabolite compound (FIG. 1). The UV cabinet was used to view the bands [12]. 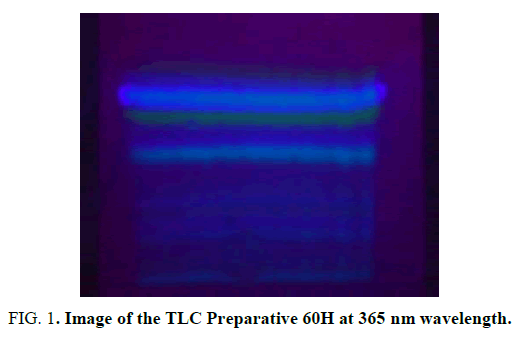 Figure 1: Image of the TLC Preparative 60H at 365 nm wavelength.

Identification and determination of the structure

Spectroscopic investigations of the compounds obtained by the 400 MHz apparatus were performed with 1HNMR and 13CNMR in a chloroform (CDcl3) solvent in Tabriz University. The composition of 2 with green fluorescence and (Rf = 57%) determined the structure and identified (FIG. 2 and 3). 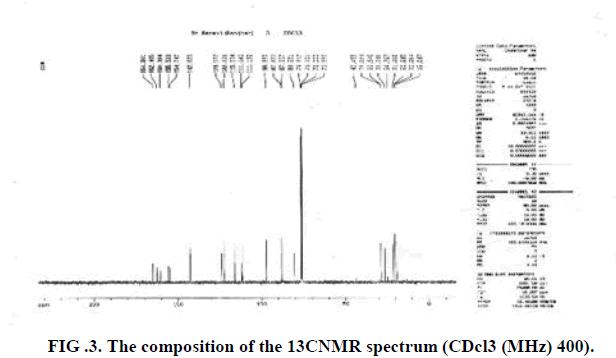 Extraction and analysis of essence

The essence of the aerial part was extracted by using Clevenger’s apparatus with steam distillation method for 4 h. For this purpose, 100 g of aerial part powder with 400 cc distilled water and 10cc glycerol (to increase permeability) were used. The essence was injected into the mass spectrometer (GC/MS) to study the compounds. Identification of essence composition was obtained by their mass spectrometry and compared with the machine's database.

Identification and extraction of Furanocomarins

From n-hexane extract of 60% fraction a combination was extracted based on spectroscopic data, especially NMR data, and comparing these data with the sources, this combination of Furanocomarin was detected as Prunchemine [5]. Its chemical structure is based on spectral data in FIG. 4. This compound is a secondary metabolite of the group of phenylpropanoids [13].

Where comarinic compounds are seen in the advanced species of plants, it can be noted that this plant and its various species are from the advanced plants of the Apiaceae family. In the phytochemical study of Ferulago carduchorum, a combination of prantchimgin and extracts of n- Hexane was extracted. prantchimgin is a blend that was extracted from this species for the first time, which is a Furanocomarin [16]. This combination is abundantly extracted from various species of this genus, such as F.bernardii, F.capillaris, F.qucheri, F.asparagifolia and root F.capillaris, F.brachyloba, F.granatensis umbrellas and F.me ids [17] and it is also extracted from the root of F.angulata. Other compounds such as Psoralen and B-sitostrol have also been extracted from F.bernardii aerial organ [18].

The results show the abundance of comarinic compounds in different species of this genus. Comparing the results of this study with previous studies, it can be concluded that there were three combinations of prantchimgin, psoralen and b-sitostrol in almost all tested species which are considered to be the Ferulago Indicator compounds and hence are used as chemo-toxin markers in this genus. Due to the fact that the extracted compound of this plant has anti-cancer effects, the root can be used as an anticancer agent. Ferulago studies have shown that, F.Carduchorum like F.Angulata has similar morphological properties, such as relaxing and strengthening effects (from the past) as well as had been used for treating certain diseases, such as headaches and ulcers. The two species are also very closely related to each other from phytochemical point of view, because the indicator compounds for this genus are similar in both.

The distillation process resulted in a yellowish green essence with a weight percentage of 0.5. In the essence obtained from the plant, 23 compounds were identified that α-pinene, β-pinene and sabinene are the most well-known compounds. The essence chromatogram spectrum is shown in FIG. 5. [19,20]. 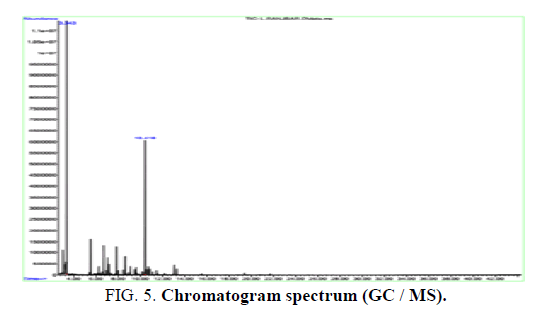 Ferulago is rich in various types of comarinic compounds and has the full potential of a medicinal herb, and it is considered to be a very important medicinal herb. 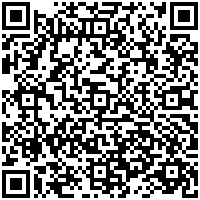