Synthesis and Evaluation of Antimicrobial, Antifungal Activity and Cell Viability of Tetrakis-[(4-Methoxy)-Phthalocyaninato] Zn(II).

The cytotoxicity and antibacterial activity of Tetrakis-[(4-methoxy)-phthalocyaninato] Zn(II) were assayed by micro-dilution bioassay and the disc diffusion method against bacterial and fungal strains. All bacterial strains were particularly sensitive to the ZnPc with low MICs values ranging from 1 to 2 mg/mL and less active against the four Candida species tested with a diameter of growth inhibition about 6 mm and a MICs values ranging from 1 to 4 mg/mL. The percent of cell viability was evaluated on HEp-2 cells using the MTT salt reduction assay. The tested compound has no toxicity in HEp-2 cells (CC50>1000 μg. mL-1) and appears to be a promising antimicrobial agent.

Since their early discovery in the last century, phthalocyanines (Pcs) have been of great interest to chemists, physicists and industrial scientists and have become one of the most studied of all organic functional materials. In addition to their use as blue and green colorants, they are a versatile class of functional dyes, phthalocyanines have been widely studied for their applications in various disciplines. Phthalocyanines (Pcs) have been studied for many years and they are still the subject of intense investigations, active research fields have included their use for fuel cells, photovoltaic and solar cells [1-3], photosensitizers [4], gas sensors [5].

For all the above mentioned industrial applications, the growing antibacterial resistance among pathogens remains a global threat to health care as an endemic which keeps reminding scientific societies to develop new antibiotics. The interest towards the development of conventional antibiotics is reduced due to continual problems of bacterial resistance. Therefore, it is an emerging interest in the design and development of new materials with a novel and distinct mechanism in killing pathogens by replacing the conventional mechanisms.

The determination of antibacterial activity was done using two methods, the disc diffusion assay and the micro-dilution assay. Additionally, we have attempted to explore more results on the cytotoxicity and cell viability of our compound to be considered as potential antifungal and antibacterial agent.

UV-V is spectra were recorded using a spectrophotometer UV-1600PC. NMR spectra were recorded with a Bruker AC-300 instrument. Column chromatography was performed with Merck 60 (230-400 mesh, 60 Å) silica gel. All solvents and reagents were purchased from Sigma-Aldrich, across and were used without further purification.

To a solution of 4-hydroxyphtalonitrile 1 (150 mg, 1 mmol) in dry acetone (15 mL) was added K2CO3 (158 mg, 1.1 mmol) with efficient stirring. 1 mL of iodomethane was then added and the mixture was stirred under reflux for 6 hours. The resulting mixture was cooled and K2CO3 was collected by filtration. The solvent was removed under reduced pressure to give 154 mg of compound 2.

For the disc-diffusion assay, 10 μL from the microorganism’s culture stock were activated on a tube containing 9 mL of Mueller-Hinton (MH) broth (for bacteria) and Sabouraud (SB) chloramphenicol broth (for Candida strains), then incubated at 37°C during 24 h. After one night, the cultures were used, and the optical density was adjusted to 0.1 at OD600 for bacteria and 0.4 at OD540 for Candida strains corresponding approximately to 107 UFC/mL. The inoculums of bacteria and yeasts were streaked onto MH and SB agar plates, respectively, using a sterile cotton swab, as recommended by the CA-SFM EUCAST 2017. Sterile filter discs (diameter 6 mm, Bio life Italy) were impregnated with 20 μL of the ZnPc sample (32 mg/mL) and placed on the appropriate agar media. Ampicillin (10 mg/mL;10 μL/disc) and Amphotericin B (10 mg/mL; 10 μL/disc) were served as positive standards. After 24 h of culture (37°C), the diameter of the growth inhibition zone (IZ) was measured using a flat rule. Each experiment was carried out in triplicate and the mean value of the inhibition zones was registered. The results were expressed in terms of inhibition zone (IZ) of growth around each disc in millimeters as: low activity (1-6 mm), moderate activity (7-10 mm), high activity (11-15 mm) and very high activity (12-20 mm) [6]. The minimal inhibition concentrations (MICs) and the minimal bactericidal/fungicidal concentrations (MBCs/MFCs) values were determined for all bacterial/fungal strains by using the microdilution assay as described by Snoussi et al. [7]. The bacterial/fungal inoculums were prepared from 18 h broth cultures and suspensions and spectrophotometrically adjusted to 107 UFC/mL. The ZnPc sample was first dissolved in 10% dimethyl sulfoxide (DMSO) and then serial two-fold dilutions were made in a final concentrations range of 0.0039-8 mg/mL. Firstly, 95 μL of nutrient broth was dispersed in each well of plates. An aliquot of 100 μL from the stock solutions of the tested Zn Pc was added into the wells. Finally, 5 μL from each microbial suspension was added to all the wells. The first well containing 195 μL of nutrient broth (Mueller Hinton broth or Sabouraud Chloramphenicol broth) without leaves extract and 5 μL of the inoculum corresponds to the negative control. The final volume in each well was 200 μL. The plates were incubated at 37°C for 24 h.

The MIC was defined as the lowest concentration of the synthetic ZnPc able to inhibit the growth of the microorganisms, so no visible changes were detected in the broth medium. The MBC/MFC ratio corresponds to the highest dilution (lowest concentration) of the sample, which showed clear fluid and an absence of visible growth.

The cytotoxicity effect of our compound was evaluated on HEp-2 cells using MTT (dimethyl thiazolyl diphenyl tetrazolium salt) assay. Cells were cultured in 96 well culture plates at a final concentration of 5 104 well for 24 hours at 37°C and 5% CO2 in humidified atmosphere. After 24 h, the medium was removed, cells were washed twice with PBS and inoculated with 200 μL of extract diluted in Eagle’s minimal essential medium supplemented with 2% fetal calf serum (two-fold dilutions, ranging from 1 μg to 8 μg). Cells could grow for 72 h at 37°C 5% CO2. Then, medium was removed cells were washed in PBS and 40 μl of MTT solution at 5 mg/ml (MTT, Sigma, Saint Louis, MO, USA) were added to each well. Plates were incubated for 4 h at 37°C 5% CO2 and the formed formazan crystals were solubilized in DMSO (Sigma, USA). Only viable cells can reduce the MTT salt to colored formazan. The absorbance of formazan generated dye was determined using a microplate reader (Thermo Fisher Scientific, USA) at 540 nm. The percentage of viability was calculated using the following formula: (% V)=Absorbance of treated cells/Absorbance of control cells, the viability of control cells was set to 100%. The CC50 value of our compound was calculated from the dose-response curves by linear regression analysis.

Generally, substituted phthalocyanines are prepared by cyclo-tetramerisation of substituted phthalonitriles. Herein, the synthesis of Zinc phthalocyanine 3 was achieved by treatment of methoxyphthalonitrile 2 with anhydrous Zinc (II) acetate in dried butanol and DBU as a catalyst. The proposed structure of Zn(II)-phthalocyanine was confirmed with 1H, 13C NMR and mass spectrometry. UV-vis spectra of phthalocyanines are the most reliable signs evidencing the formation of Pc macrocycle. The Q-band absorption is responsible for the characteristically intense green colour of the ZnPc and this band has been interpreted in terms of -* excitation between bonding and antibonding molecular orbitals [8,9].

The electronic spectrum of the ZnPc obtained in dichloromethane solution Figure 1 shows the characteristic Q-band absorption in the 600-730 nm region. The Soret-band of ZnPc arising from the deeper π levels → LUMO transitions is observed in the UV region at about 300-450 nm. 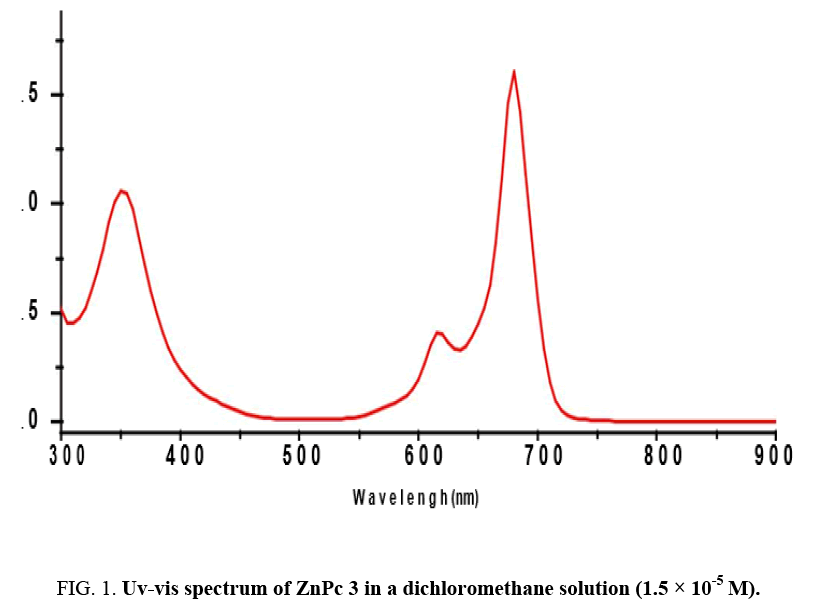 Microbiological tests were developed, and the results are presented in Table 1. The results showed that the ZnPc was active against the tested Gram positive and Gram-negative bacteria tested with a diameter of growth inhibition zones ranging from 6 to 10 mm. Using the scheme (SCHEME. 1) proposed by Praveen et al. [6], the ZnPc sample tested can be classified as sample with moderate activity (ZI ranging from 7 to 10 mm). All bacterial strains were particularly sensitive to the ZnPc with low MICs values ranging from 1 to 2 mg/mL. Low concentrations of ZnPc were needed to reproduce a bactericidal effect with a concentration about 4 mg/mL.

The ZnPc sample was less active against the four Candida species tested with a diameter of growth inhibition about 6 mm and a MICs values ranging from 1 to 4 mg/ml. The fungicidal effect was obtained from 4 to 8 mg/ml of ZnPc sample.

The study reported in this paper provides a broad range of information about the microbial activities of a Zinc phthalocyanine derivative against four different fungal and nine different bacterial strains. To verify the potential risk of ZnPc to human cells, the cytotoxicity of this compound was also assessed.

According to the biological evaluations, all bacterial strains were particularly sensitive to the ZnPc with low MICs values ranging from 1 to 2 mg/mL and less active against the four Candida species tested with a diameter of growth inhibition about 6 mm and a MICs values ranging from 1 to 4 mg/mL. The tested compound has no toxicity in HEp-2 cells (CC50>1000 μg. mL-1).

The lack of high cytotoxicity could be beneficial as potential antifungal and antimicrobial agent. The synthesized compound could be considered a promising antimicrobial agent and a valuable building block for further derivatization to design more potent biological activity.

Authors are grateful to the Scientific Research Projects Tabuk University for the financial support of this research. 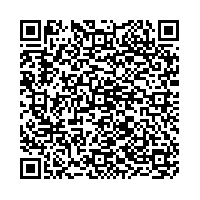