The drug release profile of all five formulations were scanned in dissolution media, SEM image of optimized formulation SFM-3 clearly indicated that particles were spherical and nano-ranged. Differential Scanning Calorimetry (DSC) and X-Ray Diffractometry (XRD) results showed that drug was converted from crystalline to amorphous state while FTIR showed that there was no interaction between drug and lipid.

One of the most important reasons for decrease in use of many drugs is their poor solubility in water and hence low bioavailability. The modern approach to resolve the issue is the nanotechnological diagonal i.e. size reduction to nanoscale. Among a widespread diversity of nano-carriers, lipid-based system shows various plusses over other formulations [1]. These nano-carriers are biodegradable, biocompatible and can effortlessly be produced by adaptable and up-scalable techniques. Solid lipid nanoparticles are generally used for efficient delivery of lipophilic drugs. Solid Lipid Nanoparticles (SLNs) give collective rewards of polymeric nanoparticles, liposomes and fat emulsion.

The entrapment of drug at outer shell of biocompatible lipid core and surfactant in SLN system is excellent substitute to polymeric nanoparticles in term of lower toxicity. The replacement of liquid oils by solid lipids is a very smart idea to accomplish controlled drug release, as drug mobility in a solid is significantly lower compared with liquid lipid. SLN can be used to enhance the bioavailability of drugs, e.g. cyclosporine A and can also be used to obtain controlled release formulation of lipophilic drugs e.g. camptothecin.

Sulfasalazine (SSZ) is a sulfa drug and mesalazine’s derivative which is formed by the combination of sulfapyridine and salicylate through an azo bond. Sulfasalazine is a kind of drug known as Disease-Modifying Anti-Rheumatic Drug (DMARD). DMARD have the effect of dulling down the underlying disease course, rather than only curing symptoms. SSZ is used to treatment rheumatoid arthritis and also for the treatment of other kind of arthritis related with ankylosing spondylitis and inflammatory bowel disease.

SSZ belongs to Biopharmaceutical Classification System-IV (BCS-IV) with low water solubility and low permeability. The bioavailability of SSZ is <15 %. The exact mechanism of SSZ is unknown. Adult dose of SSZ for the treatment of Crohn’s disease and Ulcerative colitis is 500 mg daily while for rheumatoid arthritis initial dose is 500 mg/day which can be gradually increased. The common side effects of SSZ include variation in total blood counts, nausea, vomiting, skin rashes sensitivity to direct sunlight and sometimes headache.

SSZ is a yellow colored drug; after oral administration the color of urine, tears and sweat become an orange tinge, which can blemish clothing and contact lenses [2]. Patient should take plenty of water and fluid while taking SSZ.

The size and Polydispersity Index (PDI) of all 12 formulations were computed by photon correlation spectroscopy using Zetasizer Nano (ZS-90, Malvern Instruments, Malvern, UK). To obtain 50 and 200 Kcps the samples were diluted with deionized water.

After optimizing the different conditions for solvent emulsification diffusion technique one of the best optimized formulation (BFM-11) was selected based on zeta size and PDI (Polydispersity Index) then the drug SSZ was loaded. But here again the drug was loaded in different ratio with lipid. The lipid drug ratios were 5:1, 10:1, 15:1, 20:1, and 25:1 for SFM-1, SFM-2, SFM-3, SFM-4, SFM-5 respectively. For all five formulations the specific amount of stearic acid was melted at 75⁰C (5⁰C above its melting point) and SSZ dissolved in ethanol was added. Tween-80 and Polyvinylpyrrolidone (PVP) in specified quantity were dissolved in deionized water. Organic and aqueous phases were mixed on magnetic stirrer at 1200 rmp for specific time intervals to obtain lipid matrix dispersion followed by dilution with excess amount of water.

The SSZ loaded SLNs were lyophilized using freeze dryer (Heto PowerDry LL1500- Thermo Electron Corporation, USA). Fructose solution (5%) was used as cryoprotectant and added before drying. The SLNs were placed at -20⁰C overnight and then transferred to freeze dryer shelves (shelf temperature -75⁰C). The samples were lyophilized for 48 h from -75⁰C to 25⁰C at increasing rate of 5⁰C/h.

Measurement of size zeta and PDI

In-vitro release of SSZ from SLNs

Dialysis bag method was used to perform in-vitro release studies. Dialysis bags of molecular weight cut off 12000 to14000 (Standard Grade Regenerated Cellulose Dialysis Membrane, Spectrum Lab Canada) was drenched in deionized water for 12hrs prior to use. 1mL of SSZ loaded SLNs dispersion from each formulation were decanted into the dialysis bags by fixing both ends with thread and placed into phosphate buffer pH 7.4 (dissolution media) in beaker with continuous stirring on magnetic stirrer. After specific intervals of time i.e. 1, 2, 3, 4, 5, 6, 7, 8, 10 and 12h, samples were taken for analysis and same volume of fresh phosphate buffer was added. Samples were analyzed by using a UV Spectrophotometer at a λmax of 359nm against a blank phosphate buffer of pH 7.4. Data obtained from in-vitro release studies were fitted into various kinetic equations to find out both release rate and mechanism of SSZ release from solid lipid nanoparticles.

The stability and behavior of SLNs can be determined by the arrangement of components and molecules orientation within nanoparticles. Scanning electron microscopy (SEM) was performed for SFM-3 using Scanning Electron Microscope (JSM910, JEOL Japan) at an acceleration voltage of 20KV and a magnification of 30,000X.

Prior approval was taken from Research Ethics Committee (vide letter No.DREC/20160503-14). Rabbits (2±0.3 Kg) were kept fasted for 12 hours before oral administration but allowed for water. Two groups of Rabbits were made each having 6 animals. SSZ-SLNs were administered to Group-I while Salazodine to Group-II (100 mgkg-1). 0.5 ml of blood samples were collected from marginal ear vein at various time intervals (0−24 hour).

Determination of SSZ in plasma

Plasma was quantified for SSZ by using HPLC technique. Methanol was used as mobile phase. Reversed phase column (Supelco C18, 25cm in length, 4.6 mm width and 5μm particle size) protected with a precolumn (Supelco Cl8) was used. The column was kept at 37oC, flow rate l ml/min and retention−time 3 mints. Plasma samples were mixed with two volumes of methanol and placed at -20oC for 10 minutes followed by centrifugation to precipitate proteins. The supernatant (20μl) was injected for the detection of SSZ concentration using UV detector (λmax 358 nm). The concentration was quantified from area of chromatographic peak by using calibration curve.

Preparation and optimization of SLNs 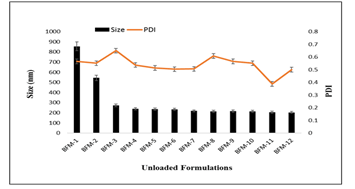 Five different formulations of SSZ loaded SLNs (SFM-1 to SFM-5) based on drug lipid ratio were fabricated. The optimized SFM-3 nanoformulation showed particle size 202.3nm ± 2.2, PDI 0.376 ± 0.02 and zeta potential -35.82mV ± 2. Results showed that particle size reduced after drug loading, which is due to decreased free lipid content. In addition, PDI was controlled and reduced by increasing stirring time. The PDI <0.5 and zeta potential in the range of ± 30 demonstrated that the produced nanoformulation would be stable in nature.

In the prepared SSZ-SLNs, these values were within the range, which exhibit electrostatic stabilization. Consequently there would be no aggregation, which can potentially led to prevent Ostwald ripening and particles growth. 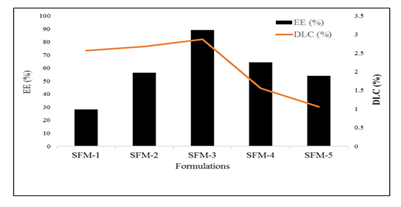 SEM micrograph of SSZ loaded SLNs evidently denoted that the prepared solid lipid nanoparticles of Sulfasalazine were spherical in shape and had smooth surface. Micrograph showed that the size of the nanoparticles was below 210 nm with homogeneous distribution of the produced nanoparticle.

No significant change was observed in size and PDI of SFM-3 nanoformulation stored at refrigerated temperature. However, for the initial four weeks some growth was observed at room temperature followed by stabilization for rest of the period. This is also because of the amorphous nature of the SFM-3nanoformulation and might be degradation of both drug and lipid having low glass-transition temperature. It is also common that particles in amorphous solid deposit on the surface of the larger ones. Statistically data was analysed by two-tailed t-test, which showed p-value 0.02for zeta size and 0.04 for PDI.

SLNs can be prepared by solvent emulsification diffusion method which are used to encapsulate lipophilic drugs. The drug is dissolved in organic phase of the system, together with the lipid. The particle sizes of fabricated SLNs for both BCS-II and IV drugs were in the desired nano-metric range, PDI, zeta-potential, EE and DLC [5]. Stability testing showed that the SLNs were more stable at refrigerated temperature. Both diffraction and thermal analysis confirmed reduction in crystalline nature of fabricated nanoformulation. In-vitro release profiles showed sustained release of Niclosamide and Sulfasalazine.

Conclusively the purpose of prolonged drug release is to enhance therapeutic activity while abating the deleterious side effects of the drug. SLNs have been surfaced as a novel drug carrier for lipophilic drug, sulfasalazine. We have exposed that sulfasalazine as in form of SLNs through optimized solvent emulsification diffusion technique is a favorable Nano-medicine with value-added stability and prolonged release. Hydrophobic drugs like sulfasalazine can be successfully loaded in lipid such as stearic acid and surfactant tween-80. The in vitro release study of sulfasalazine confirmed that this system is suitable tp improve oral delivery of sulfasalazine with increased aqueous solubility, permeability and finally bioavailability.

The authors wish to thank Higher Education Commission of Pakistan for sponsoring this research through NRPU project no. 10004/KPK/ NRPU/RandD/HEC/2017 and National Institute for Biotechnology and Genetic Engineering Faisalabad and Ferozsons Labs Nowshera, Pakistan for providing research facilities.