Polymer nanocomposites from multiwalled carbon nano tubes (MWCNTs) and xanthan gum (XG)-poly vinyl alcohol (PVA) polymer blend were prepared at different MWCNTs weight fractions. Rheological results indicated that addition of XG to PVA polymer will enhance rheological properties and thermal stability of MWCNTs-PVA nanocomposite. Addition of MWCNTs up to 1.5 w% will significantly improve storage modulus of the neat polymer blend while the increase of MWCNTs up to 3 w% will slightly decrease storage modulus. Optical results, on the other hand, revealed that MWCNTs are homogenously distributed and well dispersed in the neat polymer. Increasing of nano fillers in neat polymer will decrease optical energy gap from 5.30 eV (for pure XG-PVA) to 3.30 eV. Electrical results implied that adding XG to MWCNTs-PVA nanocomposite system will not highly affect electrical properties of nanocomposites.

One of the basics of industrial requirements is to create a new material with attractive physical properties. Hence, extensive researches focused on this field in the last few years [1-3]. In general, the blending of polymers produces a wide range of materials with desired properties. Additionally, engineering of polymer materials with new properties using commercial and available polymers was also considered by many researchers. Such a system has advantages such as simplicity of preparation, a low-cost material with the desired property, easy control in the physical properties, and requires little or no extra expenditure compared to the other polymer synthesis [2].

Xanthan gum (XG) was discovered by Allene Rosalind Jeanes, her research team at the US Department of agriculture, and brought into commercial production under the trade name Kelzan in the early 1960s [4,5]. Xanthan gum derives its name from the strain of bacteria used during the fermentation process, Xanthomonas campestris. This is the same bacterium responsible for causing black rot to form on broccoli, cauliflower, and other leafy vegetables. It is mainly considered to be non-gelling and used for the control of viscosity due to the tenuous associations endowing it with weak-gel shear-thinning properties [5].

Generally, adding MWCNTs to polymers will significantly improve the physical properties of neat polymers. However, the choice of CNTs as nano-fillers in neat polymer systems refer to their superior size, shape, and remarkable physical performance of the nanotubes that possess high electrical conductivity, very high tensile strength, and high thermal stability [10-17,14-18], since nanotubes have found applications in various areas such as electrochemical devices, hydrogen storage, field emission devices, sensors, and probes. Furthermore, one of the main challenges faced in the preparation of well-dispersed CNTs-polymer nanocomposites is that nanotubes are held together as bundles and ropes due to the existence of van der Waals attraction between them. As a result, they have a very low solubility in solvents and tend to remain as entangled agglomerates. Hence, many techniques were used to improve CNTs dispersion in a polymer matrix, such as ultra-sonication, plasma, high shear mixing, and surfactant addition and melt blending and chemical modification through functionalization [14-18].

In this work, we focus on rheological and optoelectrical properties of MWCNTs XG-PVA nanocomposite at different weight ratios of MWCNTs. Rheological properties such as storage modulus, loss modulus, and tangent loss will be presented as a function of temperature and MWCNTs content. Besides, glass transition temperature will be determined by dynamic mechanical data. Optical properties such as absorption coefficient and the optical energy gap will be also considered and presented. Additionally, the electrical properties of prepared nano-composite will be presented and discussed. Finally, correlations between dynamic mechanical, optical, and electrical are also reported.

Polyvinyl alcohol (PVA, Mw=13,000-23,000) was purchased from Sigma-Aldrich. XG obtained (Aldrich, ign. Residue ≤15%, loss ≤15% loss on drying, viscosity 25-70 mPas, 1 % in H2O (25°C)). Multi-walled carbon nanotubes (MWCNTs) were purchased from Chengdu Organic Chemicals Co. (China). MWCNTs were synthesized by natural gas catalytic decomposition over the Ni-based catalyst and were advertised as having >50 nm diameter, 10-20 μm length, and >95 % purity. Initially, MWCNTs was treated at optimum pH condition [10] to improve their dispersion in the neat polymer blend. Polymers were dissolved separately in water and ultrasonicated using UP 200S ultrasonicator (Hielsher Company-Ultrasonic Technology) for 1h. Both solutions were mixed at 5 w% XG. The prepared solution was stirred at 30℃ by a magnetic stirrer for 24 h until a homogeneous polymer solution was formed. Functionalized MWCNTs were added to water and ultrasonicated for 30 min. Polymer blend and MWCNTs solutions were stirred again for 24 h until a homogenous nanocomposite is formed at different MWCNTs weight ratios. The obtained solution was cast in a glass petri dish (dia. of 5 cm). The solvent was evaporated at room temperature for 24 h. The film thickness 0.1 mm was measured using electronic digital micrometer (MITUTOYO-China) with 0.001 mm resolution.

All rheological parameters were measured in the temperature range 22-145℃ and frequency range 0.1 Hz using dynamic Mechanical Analyzer DMA Q800 (TA Instruments LLC, DE, USA) instrument with film clamps. The tests were performed on film specimens of dimensions 10 mm, length 4mm width, and 0.1mm thick. The measurements were done within strain amplitude of oscillation at 5 mm on film samples. A static pre-load force (0.01N) was applied to the sample prior to the dynamic oscillating force to prevent film buckling. During all measurements, the instrument was programmed to maintain the static load at 125% of the force required to oscillate the sample. It is important that the film remains in its linear viscoelastic region during measurement, so the experiments were recorded with constant strain. Generally, for thin polymer films, linear viscoelastic behavior can be assured with a strain of less than 0.1%, and so this limit was used.

Optical measurements were carried out using Shimadzu UV-visible spectrophotometer model UV-3600 (Japan). Measurements were performed in the wavelength range of 200-800 nm with a scan step of 0.5 nm. The optical absorbance (A) spectra were collected at room temperature. The absorption coefficient alpha was calculated from the absorbance (A). After correction for reflection, it was calculated using a formula which has been reported previously [10].

Electrical measurements (in both DC and AC fields) were performed using the 4200-SCS Semiconductor Characterization System (KEITHLEY Co.) at 70℃, and frequency range 1kHz-10 MHz. Samples were shaped into circular discs having an area (A) of 1.2 cm2 and thickness (d) of 0.1 mm and placed between two copper electrodes. Dielectric parameters in the AC field such as conductivity and dielectric constant (k) were calculated from the electrical impedance (Z) and phase angle (ϴ) [10].

Storage modulus G’, loss modulus G" and tangent loss for MWCNTs-XG-PVA nano-composites are presented in FIG. 1-3 as a function of temperature and MWCNTs weight fraction at 0.1 Hz. The values of the glass transition temperature (Tg) are listed in TABLE 1. It is obvious that the addition of XG to PVA polymer enhances the rheological properties and thermal stability of MWCNTs-PVA nanocomposite which means that the addition of XG to prepared nanocomposite system will enhance the interfacial bonding in the MWCNTs-PVA network. Besides, the addition of MWCNTs up to 1.5 w% will significantly improve storage modulus of the neat polymer blend while at a higher level of MWCNTs content (3.0 w%) the storage modulus slightly decreases (see FIG. 1). Such a decrease can be attributed to the increase of the distance between polymer chains at this level of MWCNTs content which means that the physical bond between polymer chains will decrease. However, mechanical results indicate that MWCNTs are well dispersed in the neat polymer blend system with enhanced CNTs-polymer blend interfacial bonds [13,14]. 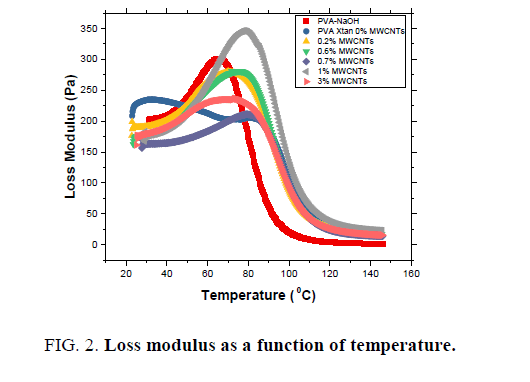 Figure 2: Loss modulus as a function of temperature. 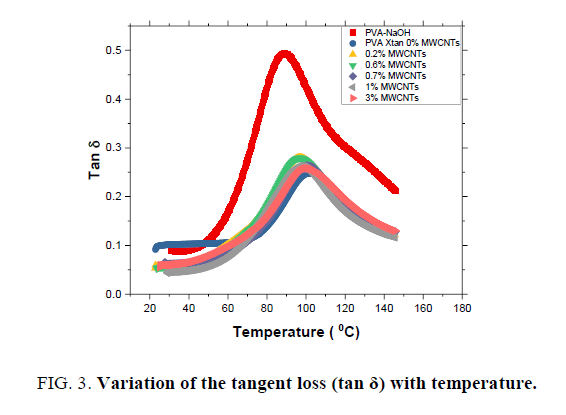 Figure 3: Variation of the tangent loss (tan ?) with temperature.

Absorption coefficient (α) was calculated for prepared nano-composites from the absorbance data (A) [11] and the obtained results are plotted in FIG. 4. It is clear that the polymer blend has a strong absorption band at UV region below 300 nm and the addition of MWCNTs will enhance the UV absorption of the neat polymer blend. Such enhancement, however, only reflects the superposition of the individual absorption for each XG, PVA and MWCNTs components. In general, optical results indicate that MWCNTs-XG-PVA system is a homogeneous system with well-dispersed MWCNTs. The optical energy gap (Eg) values for MWCNTs-XG-PVA nano-composites were determined using Mott, Davis, and Tauc formula [11] obtained data for all samples were plotted as (αhν) 1/r versus photon energy (hν) to determine optical energy gap from the resulting plot (FIG. 5). The best straight line obtained for all polymer blends was with r=3/2, and this indicates that the electron transition is a forbidden direct transition in the k space. The values of Eg were obtained from extrapolating the straight-line portion in the higher energy range of FIG. 5 to an (αhν) 2/3=0. The obtained values are presented in FIG. 6. Obtained results show that Eg decreases from 5.30 eV for pure XG-PVA to 3.30 eV with increasing of MWCNTs up to 3.0 w%. The obtained result could be attributed to the formation of localized states in the forbidden gap [14]. Additionally, FIG. 6 indicates that the optical energy gap and MWCNTs weight fractions have nearly exponential correlation and MWCNTs- XG-PVA system is optically percolated at around 0.25% MWCNTs. 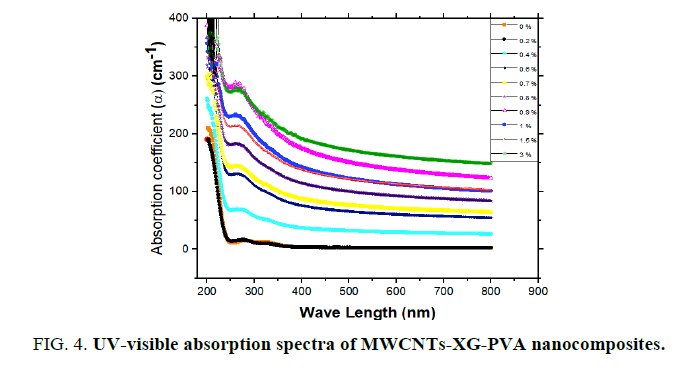 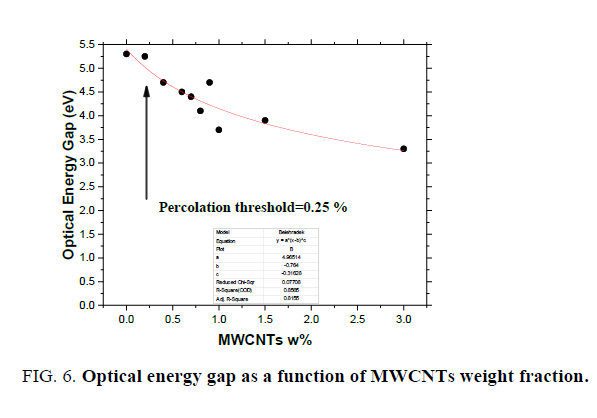 Current (I)-voltage (V) characteristics of the MWCNTs-XG-PVA nanocomposites with different MWCNT weight ratio at 70℃ are shown in FIG. 7. These characteristics indicate that the current level in these composites increases with the addition of MWNTs. This is consistent with the fact that the conductivity of the composites increases as the MWNTs concentration increases and such a trend was also observed previously by us in MWCNTs-PVA nanocomposites [10]. The charge transport mechanism based on the general power law model I=KVm, where K is a constant and m is the exponent, has been widely used for the analysis of the conduction phenomenon inorganic or polymeric materials [11,15,20]. The model is divided into three regions, Ohmic (m=1), trap-free space charge limited (m=2), and trap charge limited (m>2) [20]. I-V characteristics on log-log scales (FIG. 8) reveal one distinct region which can be fitted using the general power law model. The obtained results reveal that the exponent m is determined to be around 1, implying that the current varies linearly with voltage and hence the charge transport mechanism is governed by Ohm’s law. FIG. 9 shows the variation of total impedance Z with frequency at 700ºC for MWCNTs-XG-PVA nanocomposites. Dielectric constant and AC conductivity for prepared nanocomposites were also determined from obtained Z and phase angle data [15] for MWCNTs-XG-PVA nanocomposites and obtained results are listed in TABLE 2. Generally, electrical results indicate that the addition of MWCNTs to XG-PVA neat polymer blend will insignificantly effect on the electrical properties of the neat polymer blend. 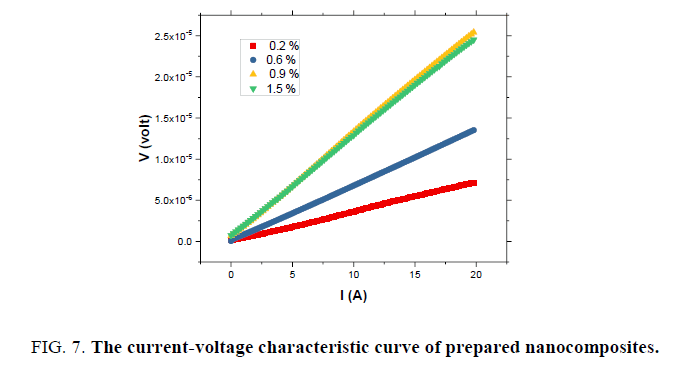 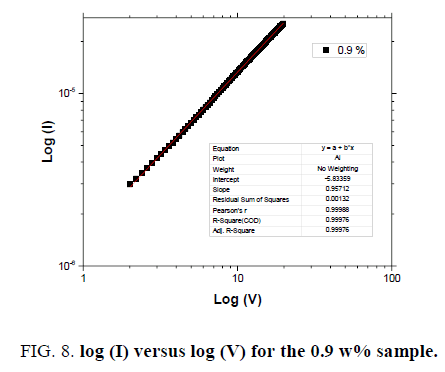 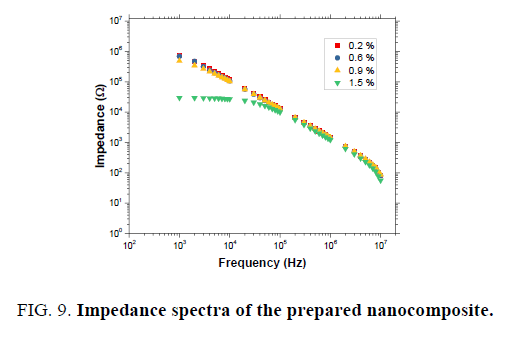 Table 1: Band gap values of the particles formed with various concentration of the cadmium and the particle sizes.

The author would like to thank Prof. Ayman Ayesh and Prof. Rami A Abdel-Rahem for their support and help. 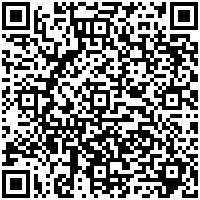