Background: Alzheimer’s disease (AD) is a progressive neurodegenerative disorder and heterogeneous mental illness, which is characterized by an age dependent loss of memory and an impairment of multiple cognitive functions. One of the factors that play an effective role in pathogenesis of Alzheimer’s disease and memory impairment is oxidative stress. Oxidative stress occurs because of an imbalance in the oxidant and antioxidant levels. In AD brain, the levels of the antioxidants were found to be decreased, Preventive antioxidants such as catalase; MDA and SOD enzymes have also been shown to be essential for neural survival and neuronal protection against oxidative damages. Injected intracerebroventricularly (i.c.v), STZ can produce oxidative stress in the brain and cognitive impairment that probably cause sporadic Alzheimer’s disease. Progesterone has potential from neurogenesis to memory improvement by reduce oxidative stress. Beside the observation that PROG and its metabolites exert functions relevant for the physiology of the CNS; they are also protective agents in the CNS. The present study was undertaken to assess the potential Progesterone as Alzheimer’s disease via the mechanisms of reduction of free radical. Material and method: 48 male rats after cannulating, randomly divided into 8 groups (n=8) including: 1. Control group 2. Shame group (sesame oil). 3. Groups of Alzheimer's disease (recipient of streptozotocin (3mg / kg)) 4-6. STZ plus progestrone (2, 1.5, 0.5μg / kg). All groups except the control were cannulated bilaterally ventricular area by stereotaxic device. Alzheimer's model was induced by intracerebroventricularly injection of streptozotocin (3mg/kg). After Indus Alzheimer Progesterone injected through the cannula and control groups received sesame oil. Characteristic of learning and spatial memory was assessed using Morris Water Maze for 5 consecutive days. At the end, the level of FRAP were measured in rat’s blood. Results: Administration progesterone significantly improved spatial memory in experimental models of Alzheimer's rats (P<0.001). FRAP amount in All dose of progesterone showed a significant reduction compared to the AD animals (P<0.001). Conclusion: It seems that pretreatment with progesterone by reduces oxidative stress and reduce the production of free radicals and therefore reduce the damage induced Alzheimer's disease and has the ability to prevent the impairment in the experimental models of Alzheimer's rats

Alzheimer’s disease (AD) is a progressive neurodegenerative disorder and heterogeneous mental illness, which is characterized by an age dependent loss of memory and an impairment of multiple cognitive functions such as anxiety [1]. AD involves the parts of the brain that control thought, memory, and language [2]. Several risk factors have been linked with the disease including: age, gender, family history, education, depression, hypertension, diabetes, high cholesterol, low physical and cognitive activity, life style habits, and medications [3]. The neuropath logically of Alzheimer's disease is characterized by the presence of neurofibrillary tangles consisting mainly of tau protein, and secretion of β-amyloid (Aβ) that condenses to form amyloid plaques [4]. As increased oxidative stress is believed to be an early event in AD pathology. Accumulating evidence suggests that brain tissues in AD patients are exposed to oxidative stress during the development of the disease. During the progression of AD, lipid per oxidation, protein oxidation, and DNA oxidation has been reported. There is increasing evidence that the very earliest neuronal and pathological characteristic of AD are evidences of oxidative damage indicating that oxidative stress represents a very early contributor to the disease [5]. Injected intracerebroventricularly (i.c.v.), STZ can produce oxidative stress in the brain and cognitive impairment that probably cause sporadic Alzheimer’s disease. Intracerebroventricular administration of low, sub diabetogenic doses of STZ has been shown to induce cognitive and brain cholinergic deficits, oxidative stress as well as decrement in brain glucose/energy metabolism [6].

Progesterone is naturally present in the brains of men and women at similar levels [7]. In this study the effect of intraventricular Progestrone injection with 3 different dosages was examined separately on the space memory and oxidative status of experimental Alzheimer samples.

In this study, 48 male Wistar rats weighing 250 ± 50 g and an average age of 3-4 months, the animals were obtained from the Tabriz Azad University. The rats were housed two per cage for 1 week in the animal house at an ambient temperature of 21 ± 1°C and a 12-h diurnal light cycle, before surgery. Laboratory food and water were given adlibitum. The animals (n=64) were randomly divided into six groups and each group of animals consisted of 8 rats.

For stereotaxic surgery, rats were anesthetized with a combination of ketamin (100 mg/kg, i.p) and xylazine (5 mg/kg, i.p), placed in a stereotaxic apparatus. The scalp was cleaned with iodine solution, incised on the midline and a burr hole was drilled through the skull (A, -0.8 mm from bregma; L, 1.4 mm; 3.4 mm below the dura) according to the stereotaxic atlas in (FIG. 1) [8]. All group except control groups were given a bilateral ICV injection of STZ (Sigma, St. Louis, USA) (3 mg/kg). STZ was freshly dissolved in cold artificial CSF (120 mM NaCl; 3 mM KCl; 1.15 mM CaCl2; 0.8 mM MgCl2; 27 mM NaHCO3; and 0.33 mM NaH2PO4 adjusted to pH 7.2) (Merck Chemical, Germany) in the first and third day and at a volume of 4μl on each side rate of 1μl per minute was used. After two weeks injected of various doses of progesterone for five consecutive days.

Morris water maze swimming test: Cognitive functions were tested using a Morris water maze swimming test (FIG. 2). Adaptation of rats to the experimental environment and behavioral activity was done for 2 days before the experimental trials. On the first day animals were subjected to1 min of freely swimming in a pool (150 • 60 cm, 50 cm deep), with the water temperature set at 25 ± 1 0°C, and on the second day they were allowed to swim freely in the pool divided in four quadrants (I–IV). In the experimental trials, performed from day 1 today 4, rats could escape from the water by finding an unseen rigid platform submerged about 2 cm below the water surface in quadrant IV. A 15-s stay on the platform was allowed. One trial consisted of three starts, each from a different quadrant (I–III), separated by a 1 min rest period. Three consecutive trials were performed per day, separated by a 30 min rest period. After the third trial on day 4, the fourth trial was performed (starts from quadrants I–III) after removal of the platform from the pool. The time spent searching for the platform after entering quadrant IV was recorded. The cut-off time was 1 min. Rats that had no alterations in memory functions (control) were expected to remember that the platform had previously been there and to spend a long time swimming with in quadrant IV, looking for the platform. Rats with drug-induced deterioration of memory were expected to be less likely to remember that the platform had been in quadrant IV, and therefore to spend less time searching for the platform within this quadrant, in comparison with control rats [9]. Measure the total antioxidant activity: To measure the total antioxidant activity of FRAP method was used based on Benzie & Strain. Under this method, the ability of the material in the revival of ferric ions (Fe3+) to down (Fe2+) by introducing TPTZ is called. Ferric ions in the presence of antioxidants to restore down and in the presence of reagent solution TPTZ FRAP come in purple. FRAP solution of sodium acetate buffer 0.3 M to 3.6 PH, dissolved in HCl 0.04 M 0.01 M TPTZ iron chloride 0.02 M, with a mass ratio of 1:1:10 is formed. 1.5 ml of the FRAP solution was mixed with 50 ml of serum frozen and after 30-20 min of light absorption at a wavelength of 593 nm of the supernatant was determined. FRAP values in mm Fe2+/mg protein expression [10].

Cognitive function test and total antioxidant activity (FRAP) as mean ± standard deviation (Mean ± SE) presented significant differences by way ANOVA, and to compare the group of Student's r-test was evaluated by software INSTAD. The corresponding figures for 2010 Excel were drawn through the application. Values p<0.05 was considered significant (FIG. 5).

The results of water maze test 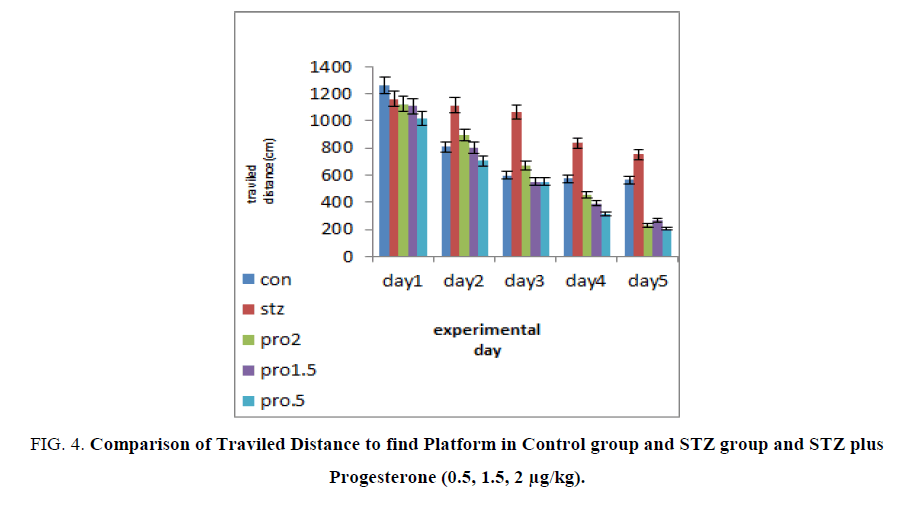 Figure 4:Comparison of Traviled Distance to find Platform in Control group and STZ group and STZ plus Progesterone (0.5, 1.5, 2 µg/kg).

The results of measurement of total antioxidant activity

According to the data analysis of antioxidant activity, FRAP values in control groups compared with sesame oil groups were not significantly different. FRAP concentration in blood appeared to be higher in the other i.c.v in compared to control groups (P <0.001). 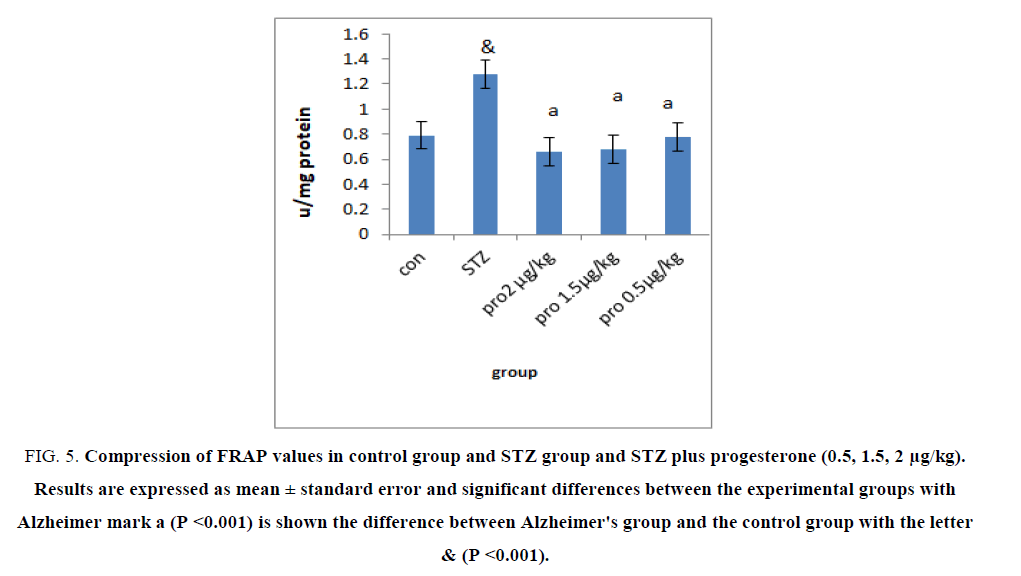 According to the incoherent reports about the progesterone's effect on Alzheimer's disease, and also the relationship between Alzheimer and anxiety and its disadvantage, in this study the effect of intraventricular Progesterone injection with 3 different dosages was examined separately on the space memory and oxidative status of experimental Alzheimer samples. The results of this study indicated that intraventricular injection of Streptozotocin can disturb space memory and learning ability and oxidative stress comparing to the control group. The intraventricular injection of has significant effects for longtime on brain biochemical, metabolism and brain functions such as, decreasing sugar absorption and using energy, increasing lactate output, decreasing phospholipids stew oxidative stress of tissues, and risk of cognitive and dynamic functions[11]. Prakash in his experiments showed that, Streptozotocin injection cause memory decreasing, learning problems, and Alzheimer's disease retention [12].

It's known that STZ injection (ICV) causes, increase in the mRNA expression and caspase-3 activity in cortex and hippocampus, that cause, apoptosis in Rats brain and at the result make problems in learning ability of Rats who had STZ injection [13].

Also, STZ injection increases oxidative stress rates in Rats who have Alzheimer's. STZ produces free radical that cuts DNA to some pieces. Streptozotocin injection to brain, increases oxidative stress of brain and makes cognitive damages that at the end cause Alzheimer disease. The studies show that in animal models Alzheimer due to the STZ, we can see reduction of Acetylcholine transferase and increasing in Acetylcholine sterase activity in brain.

Using intraventricular progesterone in this study had progressive effect on learning ability and space memory of Rats that they were subjected to Alzheimer by streptozotocin, the results show that progesterone has effective role in aim cognition increase, and this hormone changes the shape of dendrites in hippocampus, which is a part in neck that is concerned with learning ability [14].

The studies show that progesterone can have positive effects on different kinds of memory, such as working memory, reference memory, Space memory and cognition of objects [15].

Intraventricular injection of streptozotocin can increase oxidative stress that eventually lead to the improvement of Alzheimer's disease will be effective the results indicated that i.c.v. STZ only-injected had cognitive impairment which can be improved by administration of progesterone.