Background: Reproduction is a complex process relying on the interactions between the anatomical structure and the male and female normal reproductive function. Abnormal leptin levels can lead to infertility, obesity, anxiety, depression, hypertension and other cardiovascular diseases. The complex interactions between leptin, fertility hormones and various factors play important role in human fertility.

Objective: This study was designed to determine the plasma level of leptin and prolactin and correlation with fertility hormones in women with infertility.

Methods: This study was a case-control study conducted in 2016 between January and May at Gynaecology and Family Planning clinics of LAUTECH Teaching Hospital, Ogbomoso and Osogbo. A total number of 106 women each recruited as cases and controls after categorizing them as infertile and fertile groups respectively. Total sample of 212 respondents was obtained. Approval was obtained from the Ethics and Research Committee of the institution while informed consent was taken from the study participants. On the third day of the menstrual cycle, venous blood sample was taken from the respondents for analysis. Leptin, Follicle Stimulating Hormone (FSH), Luteinizing Hormone (LH), estradiol and prolactin were measured. The data obtained were analyzed using the IBM Statistical Package for the Social Sciences (SPSS) software version 20.0. Level of significance for the study was set at p-value less than 0.05.

Conclusion: There was correlation between plasma level of leptin and prolactin and fertility hormones in women with infertility but the relationship is non-linear and depends largely on the underlying causes of the infertility.

Infertility is defined as the failure to conceive, with no contraception, after one year of regular intercourse in women <35 years and after 6 months in women >35 years. Globally, epidemiological data suggest that about 10% to 15% of couples are infertile [1,2]. In Nigeria, infertility prevalence is about 12.1% and is the most frequent reason for gynecological consultations [3,4]. Usually, infertile couples are offered conventional treatment like ovulation induction, tubal surgery, with not too encouraging outcomes due to limited availability and high cost of modern technologies like in vitro fertilization [5].

Reproduction is a complex process relying on the interactions between the anatomical structure and the male and female normal reproductive functions; any factor that disrupts either of the function has the potential to cause infertility [6].

Leptin is hormone produced by Leptin (LEP) gene of white adipocytes to modulate satiety and energy homeostasis, it is also a product of many other tissues like gastric mucosa, mammary epithelial cell, human placenta and uterine endometrium [7,8]. The enhanced levels of leptin are associated with the advent of reproductive maturity and fertility [9,10]. Serum leptin plays a role in the maintenance of body weight, associated with several other regulatory functions in endocrine systems including the hypothalamic-pituitary-gonadal axis [11]. Studies have also shown the involvement of leptin in reproduction and fertility in both humans and animals [12,13]. Leptin can be associated with how well an embryo implants in the uterus, amenorrhea, irregular cycles, egg quality and In-Vitro Fertilization (IVF), IVF success rates. Abnormal leptin levels can lead to infertility, obesity, anxiety, depression, hypertension and other cardiovascular diseases [14,15].

In humans, serum leptin concentration correlates with the adiposity measured either as the Body Mass Index (BMI) or as percentage of the body fat [16]. Leptin receptors have been identified in hypothalamus, gonadotropic cells of the anterior pituitary, granulose, theca and interstitial cells of ovary as well as in the endometrium, all of which are concerned with fertility [17,18]. The central and peripheral signals of the hypothalamic-pituitary-gonadal axis seem to play an important role in the action of leptin in the menstrual cycle. Although the physiological impact of the alteration in the plasma leptin during the menstrual cycle is uncertain, it has been established that the lowest threshold of the circulating leptin is essential for a normal ovulatory function [6]. Therefore, leptin clearly appears to be linked to the reproductive system, probably relaying information regarding the adequacy of body energy homeostasis to the prospective event of pregnancy, demonstrating the importance of nutritional resources to a successful pregnancy [2].

Hyperprolactinemia is the most common endocrine disorder of the hypothalamic-pituitary axis. The clinical presentations of hyperprolactinemia result from the hormonal influence on prolactin target tissue, which are predominantly the reproductive systems and breast tissue [19]. High prolactin levels are associated with anovulation or may directly or indirectly cause infertility. The prevalence of hyperprolactinemia varies in different patient populations, stays below 1% (0.4% in an unselected normal population) but can be as high as 17% in women with reproductive disorders [20]. Prolactin acts on the adipose tissue and increases leptin synthesis and secretion in rats. However, the relationship between prolactin and leptin has not been well established in humans. It is well documented that both hormones affect gonadotropins (FSH/LH) level in humans [21,22]. Several studies have found various levels of leptin, prolactin, FSH, LH and estradiol in women with infertility as discussed above but few of them have investigated their correlation [23,24]. This study was designed to look at the plasma level of leptin and its correlation with prolactin and fertility hormones in women with infertility in an effort to understand their roles in infertility.

This study was a case-control study conducted in 2016 between January and May at Gynaecology and Family Planning clinics of LAUTECH Teaching Hospital, Ogbomoso and Osogbo. A total number of 106 women were recruited as cases and controls after categorizing them into infertile and fertile groups respectively using a multi-stage sampling technique (total sample size=212 respondents) (TABLE 1).

Table 1: Socio-demographic profile of the respondents.

The inclusion criteria were women aged 18¬49 years, regularly menstruating with a cycle length between 21 and 35 days. Also, women who presented for infertility treatment at both teaching hospitals and women attending infant welfare clinicswith their children and requesting for family planning services were recruited into the study. Women with previous history of myomectomy, oophorectomy, hysterectomy or any disease affecting the ovaries, biochemical or radiological findings suggestive of Polycystic Ovarian Syndrome (PCOS), diabetes mellitus and thyroid disease and those on hormone therapy or any drug that interferes with the menstrual cycle were excluded from the study.

The nature of the study was explained to the respondents and signed consent forms were obtained before semi-structured questionnaires were administered to them. Arrangement was made thereafter for collection of day three menstrual cycle sample for measurement of leptin, FSH, LH, estradiol and prolactin.

Five milliliters of venous blood was collected aseptically in eligible women on day three of the menstrual cycle into a well labelled serum separator gel bottle and taken to the laboratory. The blood was allowed to clot and retract. At room temperature, serum was separated by centrifugation at 2000 g-3000 g for 20 minutes to remove the supernatant. Then, the sample was stored at -20°C.

The samples were processed in duplicates at the Metabolic Research Laboratory of Ladoke Akintola University of Technology Teaching Hospital, Ogbomoso. Control sera and calibrator were included in each batch. Serum leptin was quantified with human leptin, Enzyme Linked Immunosorbent Assay (ELISA) kit manufactured by Span Biotech Ltd., Hong Kong using a double-antibody sandwich ELISA according to the manufacturer’s manual. The sensitivity of the assay was 0.01 ng/ml.

The distribution of respondents according to age (p=0.935), years of marriage (p=0.107) and occupation (p=0.678) were not significantly different between the subjects and the controls. There was a statistically significant difference between the levels of education (p=0.048) of the cases and the controls. The study also found that the prevalence of secondary infertility was higher than primary infertility among the cases (FIG. 1). 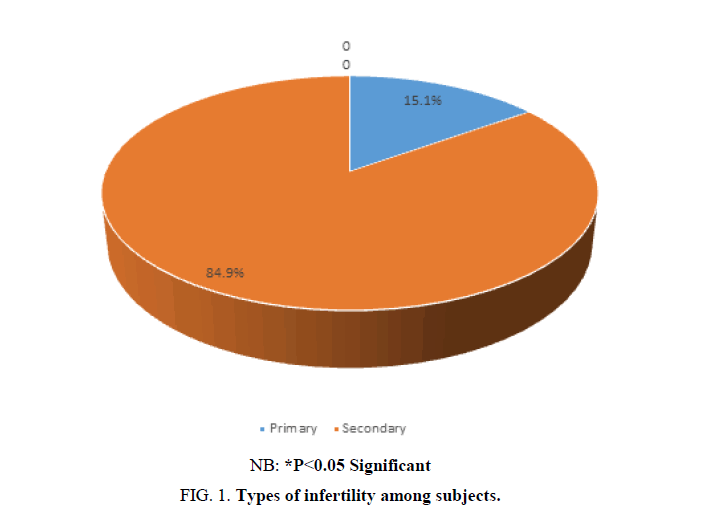 Figure 1. Types of infertility among subjects. 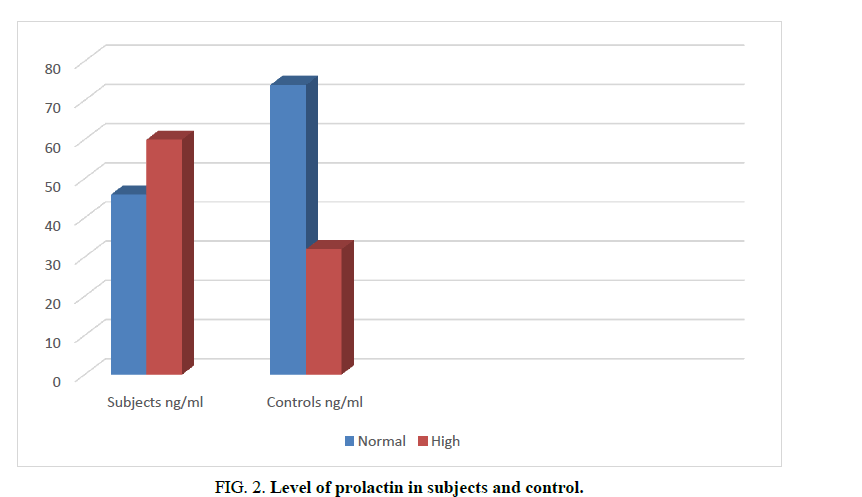 Figure 2. Level of prolactin in subjects and control.

Table 3: Correlation of anthropometric measurements and biochemical parameters in subjects.

Table 4: Correlation of anthropometric measurements and biochemical parameters in control.

Suggested reason for our result may be the advanced maternal age observed particularly among women with higher educational attainments, which may also contribute to the reduction in their fertility levels [28,29]. A reflection of this finding is the definition of infertility that put six months duration of regular unprotected sexual intercourse for women above 35 years as against one year for women less than 35 years of age [1,30]. The prevalence of secondary infertility 84.9% was found to be higher, in this study than primary infertility 15.1%. This is similar to results obtained in Enugu, South-Eastern, Nigeria and in Lagos, South-Western Nigeria. Where secondary infertility accounted for 76.8% and 80% respectively [31,32]. Though, this is different from the previous studies conducted in Morocco, North Africa and Saudi Arabia where the prevalence (67.37% and 78.99%) of primary infertility was found to be higher than that in secondarAy infertility [33,34]. This variation may be due to regional socio-cultural differences.

Weight and BMI were found to be significantly high in subjects when compared with control group. Abnormal weight and other anthropometric profiles have been described in both men and women with infertility [35,36]. The mean values of FSH and estradiol were found to be significantly high in the study population. Several studies have found similar high level of FSH and estradiol in women with infertility. The elevated level of these hormones showed a late decline in ovarian reserves and is integral parts of assessment tools for ovarian reserves [37-39].

In this study, the mean plasma level of prolactin was found to be significantly high in subjects compared with controls, which is similar to findings from other studies [19,40]. Conversely, Ugwa et al. from the North-West of Nigeria found low level of prolactin in women with infertility [41]. The regional variations in causes of infertility among Nigerian women may account for the difference in the mean plasma level of prolactin obtained in our study [30]. Our study also found that over half of the infertile women and nearly one-third of the controls had a high level of prolactin. Endocrine disorder is one of the causes of infertility and hyperprolactinaemia is the commonest cause of hypothalamic-pituitary axis in the reproductive age group [1,19]. The high level of prolactin level seen in the current study may be because majority of the controls used were breast feeding mothers. Increased prolactin levels have been established among women during lactation [42].

In this study, pearson’s correlation was used to find if there were any relationships between biochemical parameters and anthropometric measurements in subjects and in controls.

A dissimilar finding of positive correlation between BMI and estradiol was reported in another study, which was conducted among apparently healthy individuals and this may account for the difference observed [12].

No significant correlation was observed between plasma level of prolactin and other hormones. Although, high level FSH and LH have been observed in hyperprolactinaemia [44].

In conclusion, there is correlation between plasma level of leptin, prolactin and fertility hormones in women with infertility but the relationship is non-linear and depends largely on the underlying causes of the infertility.

The study found a non-linear association among plasma level of leptin, prolactin, estradiol, FSH and LH in women with infertility. In management of infertility, emphasis should be laid on the primary causes of infertility. Molecular studies may be required to establish a direct relationship between leptin level and other fertility hormones in the reproductive processes of infertile women.

We acknowledge and appreciate the contributions of the staff of Gynaecology and Family Planning clinics of LAUTECH Teaching Hospital, Ogbomoso and Osogbo.

Authors declared no conflict of interest.