2Department of Chemistry and Biochemistry, CAMCOR, University of Oregon, Eugene, OR 97403, USA

The title compound, C19H7BF10O, was formed by the reaction of pentafluorophenylmagnesium bromide with in situ generated benzyldichloroborane, followed by exposure to molecular oxygen, resulting in an oxygen insertion reaction into the C-B bond. The molecule features a trigonal planar boron, with containing a B-O bond with significant double bond character. A weak hydrogen bond between H7 and O is observed, resulting in an S (5) ring. In the structure, weak π-π interactions between the phenyl and pentafluorophenyl rings form chains along the [100] axis.

In the past two decades, research surrounding the chemistry of tris-pentafluorophenylborane and related strongly Lewis-acidic boranes has exploded. Most notably, borane-based strong Lewis acids have been used in frustrated Lewis pairs (FLPs), which couple bulky bases with bulky Lewis acids for the activation of small molecules such as H2, CO2, alkenes, alkynes and others. Most notably, FLPs have been used in the first examples of metal-free catalytic hydrogenation of alkenes. Strongly Lewis acidic boranes such as “Piers’ borane, HB (C6F5)2” have been used as highly active hydroboration agents [1-5].

The title compound was isolated as a byproduct in an attempt to synthesize benzyl bis-(pentafluorophenylborane) in our efforts to synthesize new borane Lewis acids. Potassium benzyltrifluoroborate was converted to benzyldichloroborane with tetrachlorosilane, followed by the addition of two equivalents of pentafluorophenylmagnesium chloride (Scheme. 1). Solvent removal under reduced pressure, followed by sublimation yielded a small amount of the title compound. Evidently, a small amount of oxygen entered the reaction and performed an insertion reaction into the C-B bond, which is not surprising, given the readiness of alkylboranes to undergo autoxidation reactions with molecular oxygen [3]. Crystals suitable for X-ray diffraction were grown by slow evaporation of dichloromethane. The title compound was previously prepared via reduction of benzaldehyde with Pier’s borane, and characterized by X-ray crystallography, but no structural commentary was provided [6]. This new synthetic method permits synthesis of the title compound in a one-pot reaction from cheap, commercially available starting materials. It is possible that this method may lead to a more general route for the preparation of alkoxy-substituted bis-pentafluorophenylboranes.

In a nitrogen filled glove box, a 20 mL vial containing a magnetic stir bar was charged with potassium benzyltrifluoroborate (100 mg, 0.50 mmol), which was then dissolved in anyhdrous acetonitrile (2 mL). Tetrachlorosilane (185 mg, 1.09 mmol) was added drop wise via syringe and the reaction was stirred for 1 h at 295 K. The solvent was removed in vacuo and anhyrdrous diethyl ether (2 mL) was added. Meanwhile, in a 20 mL vial containing a stir bar, bromopentafluorobenzene (283 mg (1.14 mmol) was dissolved in anhydrous diethyl ether (2 mL) and 1 M isopropylmagnesiumbromide in ether (0.55 mL, 2.23 mmol) was added and the mixture was stirred for 1 h at 295 K. After 1 h, the resulting Grignard solution was added drop wise to the stirred solution of the borane and the mixture was stirred overnight at 295 K. The ether was removed in vacuo and the residue was extracted with anhydrous toluene. The mixture was filtered through a cannula filter and the solvent was removed in vacuo. The residue was purified by sublimation under reduced pressure to afford an air-sensitive white solid (108 mg, 50% yield). Spectral data were consistent with those reported in the literature [7]. Crystals of the title compound suitable for X-ray diffraction were grown by slow evaporation of dichloromethane. 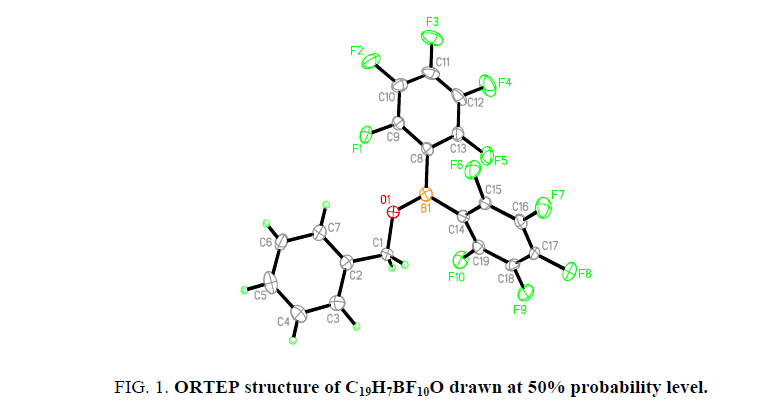 The crystal structure of the title compound does not display any significant intermolecular hydrogen bonding (shorter than sum of Van der Waals radii.) There does appear to be weak π-π interaction between the phenyl and pentafluorophenyl rings of neighboring molecules, which form chains along the [100] axis (centroid C2-C3-C4-C5-C6-C7-centroid C8-C9-C10-C11- C12-C13 distances=3.752 Å and 3.846 Å.) The rings are parallel or close to parallel (plane of C2-C3-C4-C5-C6-C7 ring to plane of C8-C9-C10-C11-C12-C13 ring angles=0.00° and 4.05°.) The rings are offset from each other (C8-centroid C8-C9- C10-C11-C12-C13-centroid C2-C3-C4-C5-C6-C7 angles=71.73° and 68.60°, Figure. 2. These features are consistent with electrostatic attraction between the electron deficient pentafluorophenyl rings and electron rich phenyl rings, and have been observed in a similar structure (YORDOZ) [9]. While a great deal of X-ray crystal structures have been published (TABLE 1) featuring boron with pentafluorophenyl groups, the vast majority of these structures contain a four-coordinate tetrahedral boron atom. A search of the Cambridge Crystallographic Database for three-coordinate boranes with two pentafluorophenyl groups and one other aromatic group yielded only one result BPh (C6F5)2 (YORDOZ). A search for three-coordinate boranes with two pentafluorophenyl groups and one boron-oxygen bond yielded three results (AMIBOO [10], ITAJIX [11], and KAKGOT [12]). 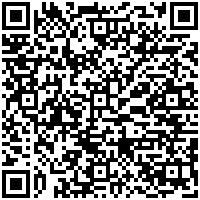