Detailed studies on the mature cypselas of 2 species belonging to 2 genera (Gerbera jamessonii and Crepis lyrata) in the tribe Mutisieae have revealed the morphological and anatomical differences. At the species level although some similarities existing the basic structure. Morphological features of the apical part, surface hairs, location of vascular trace, structure of carpopodium and pappus bristles. Of cypselas are taxonomically significant. Anatomically, testal features are more important than the pericarp in the tribe Mutisieae and have potential value for characterization of taxa. On the basis of thickening of the cell walls in testal epidermis, the studied species can be grouped into 3 categories. On the other hand, the structure of endosperm cannot be treated as significant taxonomic parameter. An artificial key is provided on morphological features of cypselas for the identification of species.

Floristically, the tribe Mutisieae usually has unique bi-labiate flowers and lack of stylopodium in cypsela. Karisetal have also shown that the tribe Mutiseae (s.l.) are devoid of sweeping hairs on the styles which exist in rest of the tribes of Asteraceae. Current classification of the tribe Mutisieae begins with the system of Bentham [1]. Cabrera has divided the tribe into 4 subtribes, i.e., Barnadesiinae, Gochnatiinae, Mutisiinae and Nassauviinae. Very recently the subtribe Barnadesiinae has been recognized as a distinct subfamily Bamadesioideae, on the basis of absence of the chloroplast DNA inversion discovered by Jansen and Palmer". Moreover, Bremer' has recognized the tribe Mutisieae (s.s) as a provisional unclassified group which constitutes the phylogenetically basal complex of the family Asteraceae and known to be a Paraphyletic group [2].

Thus, the tribe Mutisieae draws more attention to the taxonomists for better understanding of its phytogeny. Cypselar anatomical features have been successfully employed in the classification of taxa in the Asteraceae, since the work of Lavialle, particularly in the tribe Mutisieae, whereas gross morphological features of cypselas have been incorporated in different system of classifications [3,4]. In recent years, cypselar characters have been successfully used for the identification of plants in different genera and tribes of the family Asteraceae [5]. Many authors have been – attracted and fascinated by different aspects of this tribe along with cypselar morphological features. Grau" has added detailed investigation on the anatomy of fruits [6]. The present paper deals with both morphological and anatomical features of cypselas of 2 species belong to 2 genera of the tribe Mutisieae. The aim of the present study is twofold: to describe the cypselar morpho-anatomical features in detail; and to prepare an artificial key based on these observations.

Some fully mature cypselas of each species were selected from the mass of each sample. These were boiled for few minutes with water by adding few drops of glycerol. Then all specimens were preserved in FAA solution for study. After that, 3 cypselas were immersed within the 5% NaOH solution for few days, depending upon the amount of mechanical tissue of cypselas [7]. Different parts of cypselas were stained in 0.5% aqueous safranin solution and different parts of cypselas were studied with the help of light compound microscope. Cross-section from each cypsela was taken from the middle part [8]. 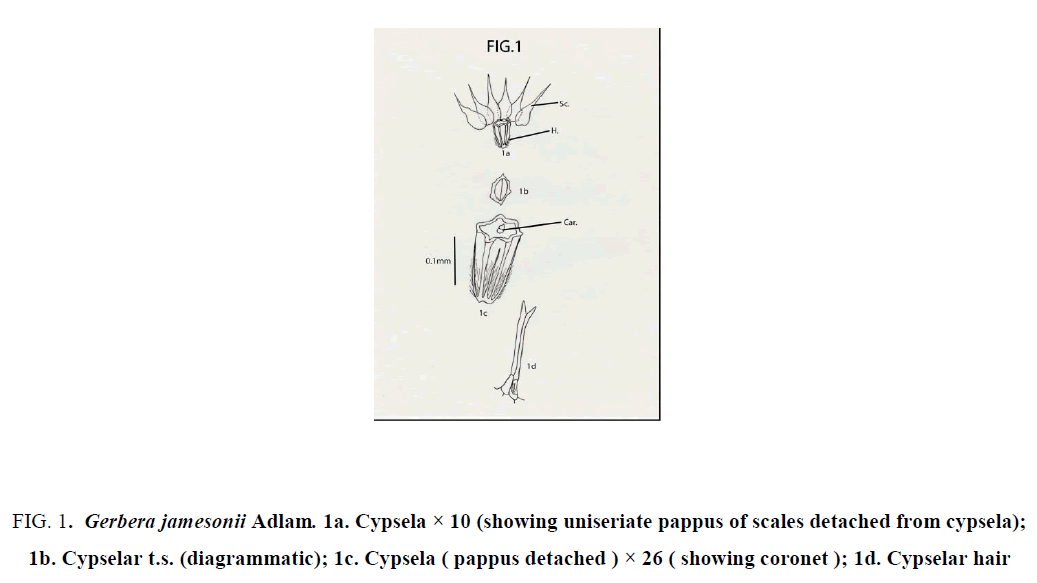 Cypsela dorsiventrally compressed; deeply 11-ribbed; cotyledon thin and plano-convex. Pericarp glabrous; sclerotic, undifferentiated, heterocellular and composed of thick-walled, compactly arranged cells of unequal size and shape; The cells in the furrow region of pericarp are comparatively large; cells at the middle of each rib comparatively small in size [17,18]. Testa uniseriate; composed of compactly and radially arranged rectangular cells having unevenly thickened wall; the walls toward the endosperms and the radial wall broad; testal cells tooth like in appearance [19,20]. At the two lateral sides of cypsela a group of polygonal sclerotic cells ( one below each ridge ) are embedded in parenchyma below the aforemid layer of testa [21]. Endosperm uniseriate (Figure 3). 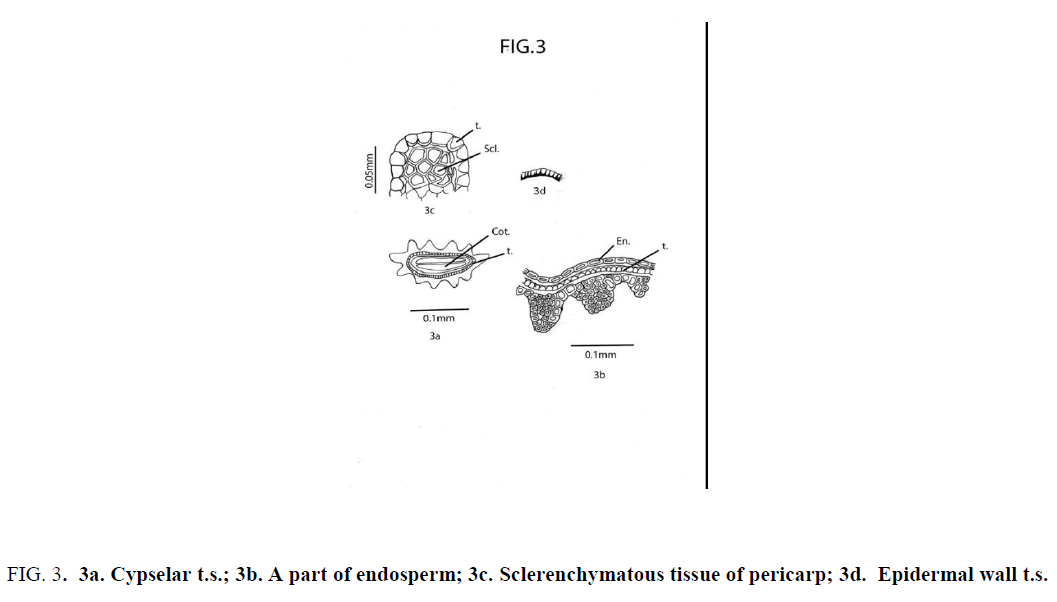 In the systematic review of Mutisieae by Cabrera in 1977 only a few features of cypselar morphology has been considered in description of the tribe: “cypsela turbinate or obconic, truncate, attenuate or rostrate at the apex, glabrous or hairy with 2- armed hairs, pappus usually of one or more series of bristles, rough or plumose; seldom formed of palae or absent” [22-24].

As subtribal character the pappus has not been favoured much by Cabrera (l.c.). Practically no cypselar and pappus characters have been considered in characterization of subtribes, through Cabrera in 1977 recognized four subtribes within the tribe.

The cypselas of G. jamessonii are quite different morphologically from other species of Gerbera studied. In G. jamessonii the cypselas are devoid of carpopodia [25], but with a prominent coronet; they are obconic, prominently ribbed, 6 continuous longitudinal ribs alternating with incomplete ribs (extended from base of cypsela but never merging at the apical end), ribs are connate at the base. Cypsela bears pappus of five to six unequals to almost equal scales [26].

Cypselas of G. jamessonii are yellowish brown or ash coloured. In Gerbera jamessonii typical long hairs are restricted only at the lower half of the cypselar surface.

Pericarp is usually ribbed with twin hairs, uniseriate, parenchymatous with tangentially elongated cells. Below each ridge compactly arranged sclerotic tissue is present just below the epidermis. Testa is usually uniseriate. Thickening is more on the basal tangential wall and less on radial wall. Non-cellular pellicle is present in both the cases. Endosperm is biseriate, cellular [27].

Based on the above observations, it can be concluded that the members of the tribe Mutiseae are with diverse macro as well as micromorphological features of cypselas. These characters are a mixture of both primitive and advanced features. However, their value as taxonomic criteria will be greatly increased in combination with other lines of evidence. 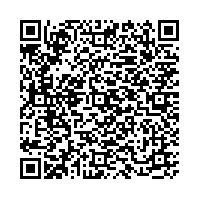