The main direction of the modern development of the processes of separation and purification of solutions of electrolytes on ion exchangers and sorbents is to find ways of significantly reducing the consumption of auxiliary reagents, as well as creating non-reagent methods for the separation of substances. The use of the effect of temperature on the equilibrium properties of ion exchangers based on cross-linked polyelectrolytes in certain cases makes it possible to increase the efficiency of separation and purification of substances by traditional schemes and to substantially reduce the amount of auxiliary reactants used [1]. Besides, this way is possible to organize so-called reagent-free two-temperature separation processes [2,3]. In addition, it was shown that it is possible to separate strong acids from their salts in a column with anion exchanger, displacing the mixture with water [4]. More detailed investigations were carried out in the corresponding reports [5-8]. Likewise, the methods for separating mixtures of electrolytes, including mixtures of salts by sorption on anion exchangers and cation exchangers, also were studied [9-13]. In the vast majority of known processes, the regeneration stage of an ion exchanger typically requires the costs of a significant excess of the regenerating reagent and as a waste, a solution of a mixture of electrolytes with a large excess of the unused regenerant (acid or alkali) results. In addition, regeneration solutions, in turn, require recycling or processing and represent a certain environmental problem. Therefore, the study of the possibility of separation of electrolytes followed by an environmentally friendly regeneration is an important practical task.

However, methods for separating strong acids from solutions of mixtures of strong acids without the use of auxiliary reagents have not yet been improved and have a number of disadvantages.

Therefore, in this paper we have studied the separation of a mixture of strong acids with a counter-current ion exchange method. From the results obtained, the number of ions in the ion exchanger phase and the composition of the sorbed electrolyte and the amount of water in the ion exchanger were calculated. Then, according to equations (1), (2) and (3), the coefficient of single separation, concentration equilibrium constant and Gibbs energy were determined.

where, ΔG is the change in Gibbs energy, kJ/mol; R is the universal gas constant J/(mol·K), T is the absolute temperature, K is the coefficient of a single separation, KC is the concentration equilibrium constant, y and x are the fraction of the components in the ionite and in the solution, m and C are the concentration of the components in the ion exchanger and in solution.

In this paper, we present results of an experimental study of anion exchange sorption from 0.8 N solutions of mixtures of hydrochloric and sulfuric acids on the macroporous weakly basic anionite AN-511 in hydroxyl form and separation of acids. To perform the experiments, the conical ion-exchange columns shown in Figure 1 were used. They are made of glass, which makes it possible to observe the state of the ion exchanger layer directly during operation. Parameters of the column: H=236 cm, Dinner=4 cm, Douter=15.5 cm, angle at the top 30. To prevent the granules from escaping, the column from above and below is provided with filtering partitions. 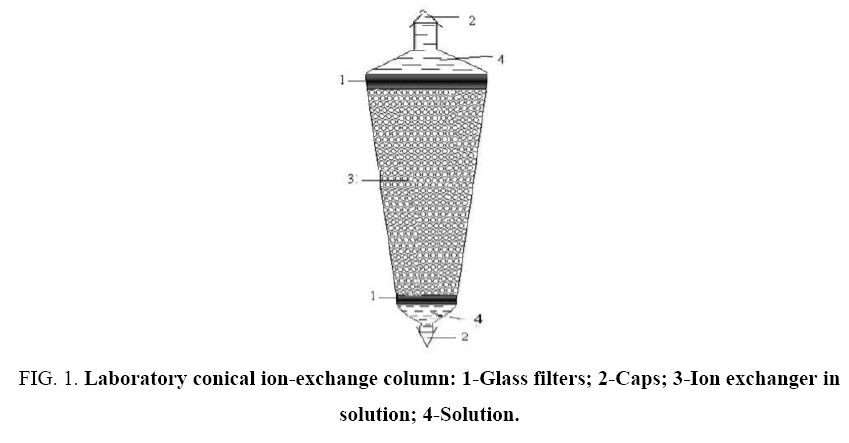 As the polymeric sorbent, the cross-linked polymer AN-511 was used, the structure of the elementary unit of which is as follows:

At first, the experiments were carried out on a fixed layer of anionite AN-511 in glass cylindrical columns. As a result of a significant increase in the anion exchange swelling during the transition to the salt form, sorption experiments in cylindrical glass columns with both a fixed bed and countercurrent led to a rupture of the columns. In addition, separation in fixed bed columns is accompanied by significant time costs associated with the displacement of water and an undivided mixture. Obviously, these costs will increase with the volume of the column. Therefore, all experiments were further carried out only in conical columns (Figure 1) and in countercurrent solution and ion exchanger. Separation of electrolytes in counter current was carried out in two counter flow columns. Due to the difference in the water densities in the inter-grain space of the ion exchanger and the initial solution, in order to avoid blurring of the sorption fronts, the initial solution was fed to column 1 from the bottom upwards and ionite from the top down. To this end, a suspension of anionite in hydroxyl form washed with water was loaded into column-1 and a mixture of solutions was pumped into the column at a rate of 5 ml / min from the bottom upwards and top-down downwardly from the ion exchanger at a rate of 7 ml/min (ratio 1.0:1.4). Through samplers, located along the entire height of the column, samples of the solution were taken and analyzed. Based on the results of the analysis, graphs were plotted for the distribution of hydroxyl, chlorine and sulfate ions over the height of the column and the position of the sorption front. Each of the obtained fronts was maintained at a given height relative to the column walls in the course of 2-3 hours and there was no noticeable change in their dimensions or shape. Hydrochloric acid is extracted from the solution mixture and accumulated in the first column and sulfuric acid in the second. The water washed anion exchanger from column 2 is fed to columns 1 and from column 1 an ion exchanger suspension in equilibrium with the feed solution enters column 2. The solution of the starting composition leaving column 2 is attached to the sample solution and returned to column 1. As a result, separation received two solutions: hydrochloric and sulfuric acid. The undivided mixture is returned for recycling. From the column, the initial solution contacting with the anion exchanger was removed from above and the anionite AN-511 in the mixed form from below.

During the experiments, the dependence of the form and extent of the sorption fronts on the experimental conditions, the method of introducing the solution into the column (from below upwards or from top to down) was investigated. The results obtained showed that in the frontal separation of the equinormal mixture a rather sharp front between the hydroxyl and chlorine ions forms on the trailing front between the ions of chlorine and sulfate and also a large zone of pure hydrochloric acid between the fronts. As an example, Figure 2 and 3 show the results obtained from the separation of solutions of "H2SO4-HCl" mixture on the AN-511 anionite in the OH- form taken with the same ratios of SO42-: Cl-1: 1 ion concentrations.

Figure 2: The output curves for separation of the H2SO4-HCl mixture by the ion exchange method on the low-basic anionite of AN-511 in the OH- form, the ratio of the ions SO42-- Cl-1:1.

Figure 3: Scheme separation of acid mixture on anionite AN-511 in countercurrent mode.

It can be seen from the output curves that the AN-511 anionite under the indicated conditions exhibits greater selectivity to the SO42- ion. In addition, according to equations (1), (2) and (3), one-shot separation coefficients, the concentration equilibrium constant and Gibbs energies for the systems studied were determined. Some calculated data are given in Table 2.