Batch adsorption process was carried out for the removal of cadmium (II) from aqueous solution using almond gum. The material was characterized using standard physio-chemical methods, SEM and FTIR studies. The adsorption isotherm was evaluated by means of Langmuir, Freundlich, Dubinin Radushkevich (D-R) and Temkin isotherm models. A maximum Langmuir adsorption capacity of 40.0 mg/g at 32°C was obtained for initial concentration of 10 mg/L, 20 mg/L, 30 mg/L and 40 mg/L. The order of the kinetics was also determined and adsorption of cadmium (II) followed second order kinetics which shows that physisorption may be involved in the process. Thermodynamic parameters (ΔG°, ΔH° and ΔS°) showed that the reaction to be endothermic, spontaneous and increasing randomness of the solid solution interface. The cost of almond gum is economically effective compared to commercial activated carbon.

Nowadays, the environmental contamination is not the only concern of scientific community. Most of the human population is exposed to heavy metals through food, water, air or absorption on the skin [1]. Heavy metal pollution has turned out to be one of the most severe environmental problems because of the tendency to bio-accumulate in ecosystem [2]. Cadmium is a non-degradable and persistent metal [3], classified as priority pollutant by United States of Environmental Protection Agency [4]. Cadmium is released into the environment by industrial effluents from electroplating, pigments, plastic, battery and zinc refining industries [5], and finds its way into the natural water systems [6]. The drinking water guideline value recommended for this element by World Health Organization and American Water Works Association (AWWA) is 0.005 mg/L [7]. Cadmium, even in traces, may cause chronic health problems, lung edema, renal dysfunction [8-10], abdominal pain, convulsions, hypertension, loss of appetite, fatigue, sleeplessness hallucinations, headache [11], and osteoporosis respectively. Hence, removal of cadmium from water sources becomes important.

Many conventional techniques have been proposed such as oxidation, reduction [12], ion exchange, reverse osmosis, precipitation, solvent extraction, membrane technology, electrochemical treatment, flocculation, coagulation, and complexation [13-16]. These techniques have their own inherent limitations such as less efficiency, sensitive operating conditions, secondary sludge and costly for disposal [17]. Adsorption, on the other hand, is found to be the best technique for the remediation of heavy metal due to its simple design and affordability.

Almond gum is produced by almond tree (Prunus amygdalus, Rosaceae family). Almond gum represents an abundant natural biomass worldwide. Almond gum is insoluble in aqueous solutions and could be used as adsorbent for the removal of cadmium (II) from waste water.

The objective of the study is to characterize the almond gum and find its feasibility for batch mode studies such pH, initial concentration, adsorbent mass and temperature on the treatment process. Langmuir, Freundlich, Dubinin Radushkevich and Temkin isotherm models were employed to quantify the biosorption equilibrium.

Cadmium nitrate [Cd (NO3)2.4H2O], molecular weight is 308.47 g/mol, was supplied by Merck, India was used as adsorbate. The stock solution was prepared by dissolving requisite amount of cadmium nitrate in 1000 ml distilled water. The solutions were stored in brown glass bottles and used to prepare different working concentrations (10 mg/L, 20 mg/L, 30 mg/L and 40 mg/L).

For batch method, 50 ml of the cadmium (II) solution with the known initial concentration and a known amount of the adsorbent were taken in a 250 ml conical flask. This mixture was agitated at 32°C by keeping the conical flask in orbital shaker at a constant speed of 180 rpm. The Cadmium (II) solution was separated from the adsorbent by centrifugation at 10,000 rpm for 20 min and the absorbance was determined using double beam UV visible spectrophotometer (LabIndia 3000+UV) at 575 nm, by the Xylenol orange colorimetric method [26]. The percentage removal of Cadmium (II) and equilibrium adsorption uptake, qe (mg/g), was calculated using the following relationships:

After adsorption, the adsorbate-loaded adsorbent was separated from the solution and the supernatant was drained out. The adsorbent was gently washed with distilled water at various pH values. Then, they were agitated for the equilibrium time and the desorbed solution was estimated.

Characterization of the adsorbent

Almond gum is an acidic polysaccharide composed on dry weight by 2.45% of protein, 0.85% of fats and 92.36% of carbohydrates with traces of mannose, rhamnose and glucuronic acid respectively [27]. The physio-chemical characteristics of almond gum are given in TABLE 1. The surface morphology of the adsorbent material by SEM shown in FIG. 1 (a) and 1(b) revealed that pores at the surface of almond gum were filled by the cadmium (II) ions adsorption. A similar observation with respect to the porous structure with large surface area on to the orange and (Citrus sinensis) (L.) osbeck for cadmium biosorption has been reported. The X-Ray Diffraction of the almond gum exhibit broad peaks and absence of a sharp peak that revealed the amorphous structure. An FTIR spectrum revealed that the peaks observed at 2940 cm-1 and 2942 cm-1 (before and after biosorption) was associated with the stretching vibrations of C-H bond of methyl, methylene and methoxy groups. Furthermore, from FIG. 2(a) and 2(b) it was observed that there are shifts in C-H stretching vibrations (2147 cm-1 to 2155 cm-1). The same findings were also being reported [25]. This shift in the vibrations indicates the inference of the Cd (II) bonding onto the biosorbent. The results of the characterization are shown in TABLE 1.

TABLE 1. Physical and chemical characteristics of the adsorbent.

Figure 1: SEM pictures of almond gum (a) before and (b) after Cd (II) biosorption. The biosorption efficiency of the cadmium ions was performed as a function of contact time and initial concentration. The adsorption rate was relatively fast initially and adsorption equilibrium was achieved within 40 min for 20 mg/L of cadmium concentration. The amount of Cd (II) adsorbed onto almond gum increased from 8.03 mg/g to 25.83 mg/g with the increase in concentration from 10 mg/L to 40 mg/L. Similar findings have been reported by several authors for the adsorption of cadmium removal from aqueous solution by pine cone biochar, Prunus avium leaves [28] respectively.

The uptake of Cd (II) by the almond gum has been modeled using first order, pseudo second order and Elovich respectively. The pseudo-first-order rate equation is [29]:

Where, q and qe are the grams of solute adsorbed per gram of adsorbent at any time and at equilibrium, respectively, and k1is the rate constant of first-order adsorption.

Where, qe and qt are the adsorption capacity at equilibrium and at time t, respectively (mg/g). For the boundary conditions to qt=0 to qt=qt at t=0 to t=t; the integrated form of equation (5) becomes:

If the pseudo-second order kinetics is applicable, the plot of t/q versus t of equation (6) should be linear relationship from which qe and k2 can be determined from the slope and intercept of the plot. The calculated equilibrium values obtained from second order were very close to the experimentally determined values (qe) with the correlation coefficient (R2) being 0.999 for 30 mg/L initial Cd (II) concentration and were thus higher than the R2 values of first order kinetic (TABLE 2). The applicability of this model implies that the rate limiting step may be chemisorption involving valency forces through sharing or exchange of electrons between adsorbate and adsorbent [30]. Obtained results are in accord with those similar studies of cadmium and lead adsorption onto mesoporous activated carbon, sorption of Cd (II) by sweet potato [31].

The Elovich model equation is generally expressed as [32]:

The values of β and α are calculated from the slope (1/β) and the intercept [ln (αβ)/β] of the plot and are listed in TABLE 2.

The Langmuir isotherm has been one of the most widely used isotherms applied to pollutant biosorption process. The model can be written in the form as:

The Langmuir isotherm assumes that the surface has homogeneous binding sites, equivalent adsorption energies and no interaction between adsorbed species and its relevant parameters are Langmuir constant “b” which refers to the energy constant related to the heat of adsorption capacity and Qo which represents the maximum loading capacity of the adsorbent [30]. The adsorption capacity, Qo was found to be 40.0 mg/g (TABLE 3).

TABLE 3. Isotherm parameters for the biosorption of Cd (II) onto almond gum.

A characteristic of the Langmuir isotherm can be expressed using a dimensionless constant called the separation factor RL as:

Moreover, the RL values decreased as the initial Cd(II) concentration increased, suggesting that the adsorption process was more favorable at higher initial Cd(II) concentrations, which was also proved by the intensity factor of Freundlich model since n>1, implying that adsorption intensity was favorable at high concentrations and much less at lower concentrations. The maximum monolayer loading capacity (Qo) obtained for the biosorption of Cd (II) ion from aqueous solution was compared to other adsorbents reported in the literature are presented in TABLE 4.

TABLE 4. Comparison of the maximum adsorption capacities for Cd (II) by other adsorbents.

The Freundlich isotherm assumes a heterogeneous adsorption surface and active sites with different energy. The linear form is given as eqn. (10).

Where kf denotes approximate adsorption capacity and n is related to intensity of adsorption. TABLE 3 shows the obtained kf and n. The correlation coefficient values and the plot qe vs. Ce indicated that the Freundlich isotherm gave a good fit to the biosorption process.

Dubinin-Radushkevich (D-R) isotherm approach assumes that there is a surface area where the adsorption energy is homogeneous. The linear form of the equation is:

The values of qm, B, E and regression coefficient (R2) are listed in TABLE 3. The importance of the E value is as follows: E< 8 kJ/mol (physical adsorption); E=8-16 kJ/mol (ion exchange); E=20-40 kJ/mol (chemical adsorption). The estimated value of E was found to be 35. 71 kJ/mol, which indicates that the adsorption of Cd (II) ions by almond gum is a chemical adsorption process.

The Temkin isotherm is represented as:

FIG. 3 presents different adsorption isotherms along with the experimental data. In order to compare the validity of isotherms, a normalized deviation, Δq (%), was calculated using the following equation: 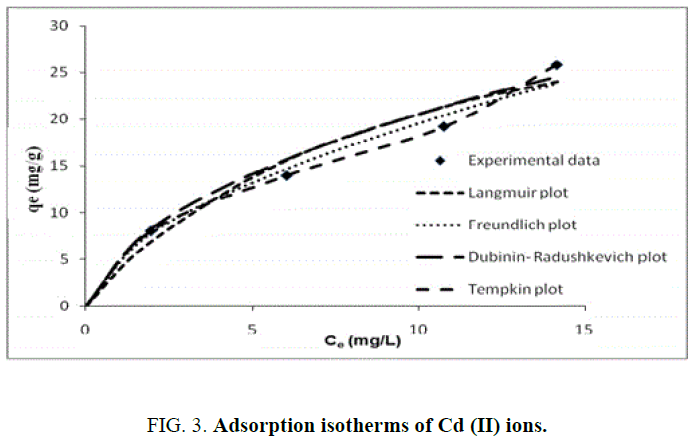 Where, superscripts ‘exp’ and ‘cal’ are the experimental and calculated values, respectively, and ‘n’ is the number of measurements. From the results it was found that values of Δq obtained from Langmuir [Δq (%)=3.5], Freundlich [Δq (%)=5] and Temkin [Δq (%)=7.0] were lower compared to D-R [Δq (%)=47.4] adsorption isotherm models. It shows that the equilibrium data fit better with Langmuir, Freundlich and Temkin isotherms over the entire range of concentrations compared to D-R and isotherm.

The effect of pH on the biosorption of Cd (II) using almond gum, separate set of batch equilibrium adsorption experiments was conducted modifying the pH from 3.0 to 8.0 and illustrated in FIG. 4 . The maximum biosorption was observed at pH 7.0 for Cd (II). The pH point of zero charge for the almond gum was found to be 5.4. At pH>pHZPC, the adsorbent is negatively charged and the adsorbate species are positively charged. Obviously, a negatively charged surface site did favor the adsorption of cationic Cd (II) ions because of electrostatic attraction. At pH 8, cadmium exists mainly as Cd (OH)+ and thus adsorbed at negatively polarized surface sites. To avoid the possible precipitation of Cd (OH)2, the pH studies should not be performed at pH>8. Similar trends have been reported for the adsorption of Cd (II) in other adsorbents [33,5,34,19]. 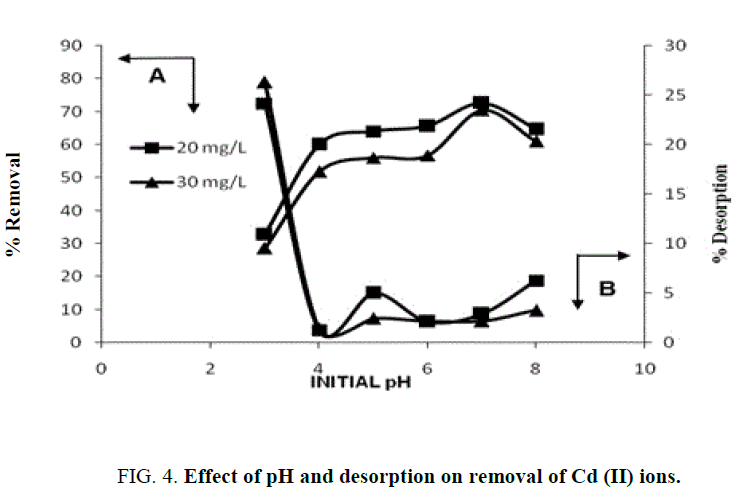 Figure 4: Effect of pH and desorption on removal of Cd (II) ions.

Desorption studies help recycle the adsorbent and to recover the metal. The percent desorption increased with decrease in pH and being capable of desorbing 26% (FIG. 4). In acidic conditions, H+ ions protonate the adsorbent surface leading to the desorption of the positively charged Cd ions [35-37].

Thermodynamic parameters such as the change in standard free energy (ΔG°), enthalpy (ΔH°) and entropy (ΔS°) of adsorption were calculated using the following equations [19,23]:

In this work almond gum, an inexpensive and efficient adsorbent are used for the removal of Cd (II) from aqueous solution. Results indicate that the pseudo second order kinetic model showed good correlation with experimental data and the equilibrium data was satisfied well with the Freundlich and Temkin isotherms equation. Biosorption increases with pH until the cadmium (II) ions are precipitated as cadmium hydroxide. Temperature studies showed that biosorption was endothermic and spontaneous in nature. 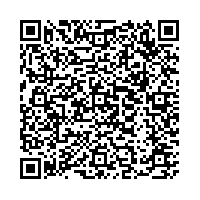