The current study was carried out on the riparian vegetation of Lund Khuwar, Kaloshah, District Mardan. During research 77 plant species belonging to 61 genera and 36 families were observed and described ecologically. Asteraceae having 8 genera (13.11%) and 10 species (12.98%), followed by Poaceae which was represented by 8 genera (13.11%) and 8 species (10.8%). Lamiaceae having 4 genera (6.55%) and 4 species (5.19%) and Moraceae had 3 genera (3.91%) and 4 species (5.19%). The leading genera were Acacia and Chenopodium with 3 (4.91%) species each. Genera like Amaranthus, Euphorbia, Juncus, Marsilea, Morus, Populus, Polygonum, Tegetes, Zinnia and Zizipus were consisting of two 2 (3.27%) species each. There were 2 (5.55%) families of Pterediophytes which were consisting of 4 (5.19%) species and 3 (4.91%) of the total genera. There were 4 (11.1%) families of Monocotyledoneae with 12 (15.85%) species and 30 (83.83%) families of Dicotyledoneae. The dicot families comprised of 61 (79.22%) species of the total number of species. Life form, leaf size, phenology and abundance classes were also determined during present study. The plants were identified with the help of available literature (Flora of Pak). The plants were submitted to the Herbarium of Centre of Plant Biodiversity, University of Peshawar, Pakistan.

The name "Lund Khwar" literally means "the ever-flowing stream or brook". Archaeological and historical evidence clue towards the Gandharan era. Lund Khwar is a historical village and union council of Takht Bhai Tehsil in Mardan District of Khyber Pakhtunkhwa, Pakistan. The district lies from 34° 05 to 34° 32' north latitudes and 71° 48' to 72° 25' east longitudes.

It is located at 34° 23' N 71° 59' E, with an altitude of 371 m (1220 feet). It is located 18 km from Takht Bahi, 10 km from Sher Garh and about 30 km from Mardan on the National Highway between Swat and Peshawar District. The town is surrounded by two main streams and a smaller brook from 3 directions which flow throughout the year. It is bounded on the north by Buner district and Malakand protected area, on the east by Swabi and Buner districts, on the south by Nowshera district and on the west by District Charsadda. Mardan district may broadly be divided into two parts, north eastern hilly area and south western plain. The entire northern side of the district is bounded by the hills. The highest points in these hills are Pajja or Sakra, 2056 m high and Garo or Pato, 1816 m high. The south western half of the district is mostly composed of fertile plain with low hills strewn across it. The climate of the research area is moderate. The summer season is extremely hot. A steep rise of temperature observed from May to June. Even July, August and September record quite high temperatures. During May and June dust storms are frequent at night. The temperature reaches to its maximum in the month of June i.e. 41.50"C. The coldest months are December and January. The mean minimum temperature recorded for the month of January is 2.09° C. Most of the rainfall occurs in the month of July, August, December and January. Maximum rainfall recorded for the month of August 125.85 mm. towards the end of cold weather there are occasional thunder storms and hail storms. The relative humidity is quite high throughout the year while maximum humidity has been recorded in December i.e. 73.33% [1]. Many studies for listing floristic diversity and its ecological evaluation have been done in different area. Some of the prominent are Haq et al. documented the ecological characteristics of twenty one species of Onion crop from University of Peshawar, Botanical Garden, District Nowshera [2]. Reported 186 species from Santh Saroola, Kotli Sattian, Rawalpindi, Pakistan. [3] Identified 93 plant species belonging to 67 genera and 30 families including Phanerophyte with the large number of species (37), Therophyte (33), Chaemophytes (12), Hemicryptophyte (6) and Cryptophyte (3). The riparian zone is the place where aquatic systems merge with the other terrestrial environment. Virtually all rainwater runoff must pass through the zone before moving into adjacent aquatic/estuarine systems [4]. Riparian vegetation reduced periphyton growth in pasture streams and influences the composition of the macro invertebrate community. The vegetation canopy shades incident light and reduces water temperatures thus influencing primary productivity [5]. Loss of riparian vegetation can decrease the amount of suitable habitat for riparian and aquatic fauna such as fish and invertebrates, thereby reducing stream productivity and fish carrying capacity [6]. Plant diversity and ecological characteristics are important in term of land degradation and erosion [7,8]. Conducted their research on linkages between spatial variation in riparian vegetation and floristic quality to the environmental heterogeneity of River Soan and its associated streams. People interpret rivers as a carriage where they dump all the garbage and let out sewers into the waterways [9,10]. Identified 21 species belonging to 14 families as riparian plant species from Korang river, Islamabad.

Regular study tours were made to the research area during March 2014 to May 2015 in the blooming period of the plants to collect plant specimens and all the related ecological information about the riparian plants species. Plant specimens were collected carefully with their full structure (stem, leaves, flowers etc.) from different parts of Lund Khuwar. During the process of collection photographs were also taken through Digital Camera. After collection specimens were placed in folded newspapers, dried and pressed for about two weeks to get them moisture free. At the same time the plants were numbered and marked with data, location and other characteristics of species. Plants identification was carried out with the help of available literature [11-15]. Ecological characteristics of plant species were known after Raunkiaer [16] and Hussain [17]. The vouchers specimens were deposited at Centre of Plant Biodiversity University of Peshawar Herbarium (UPBG).

During the study there were total 77 species belonging to 61 genera and 36 families constituted of the riparian vegetation of the study area. Asteraceae was the leading family and was represented by 8 genera (13.11%) and 10 species (12.98%) followed by Poaceae which was represented by 8 genera (13.11%) and 8 species (10.8%) followed by Lamiaceae had 4 genera (6.55%) with 4 species (5.19%). Malik et al. also studied these families were well represented in Kotli Hill during monsoon [18]. Durrani et al. also observed that these families were dominant in their research areas [19]. Badshah et al. also documented these families in their study from the rangeland of District Tank, Pakistan [20]. Hussain et al. also expressed that Ateraceae and poaceae was the leading families in their studies from Mastuj valley, Hindukush Range, Pakistan [21].

During riparian studies as shown in GRAPH 2 the Acacia and Chenopodiaum were the leading genera consisting of 3 (4.91%) species each. Genera like Amaranthus, Euphorbia, Juncus, Marsilea, Morus, Populus, Prosopus, Polygonum, Tegetes, Zinnia and Zizipus were consisting of 2 (3.27%) species each. 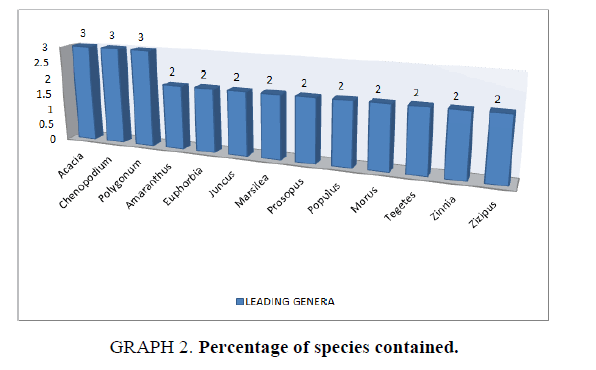 There were 4 (11.1%) monocot families having 12 (15.85%) species. Cyperaceae, Juncaceae, Poaceae and Potamogetonaceae were the monocot families found in the riparian zone of the study area. 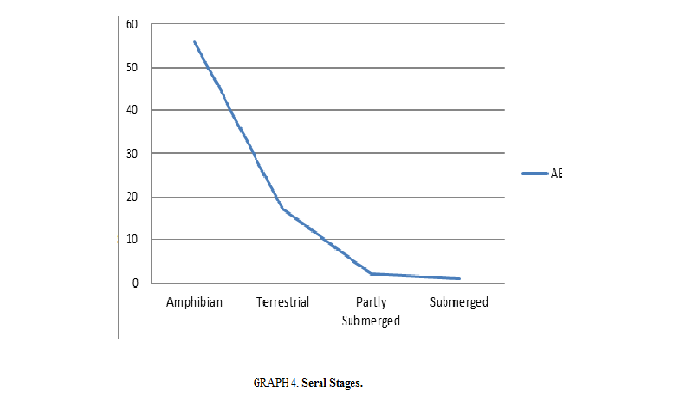 Studies based on distribution patterns of riparian vegetation in riparian corridors and use of riparian vegetation as an indicator of health of freshwater ecosystem is fewer [8]. Conducted their studies on Role of riparian vegetation in Pakistan [29]. Worked on concept of continuity/discontinuity is applied to the riparian vegetation of the corridor of the River Adour (S.W France) for the purpose of longnitudal structure explanation and to test the degree of floristic continuity of the fluvial axis [30]. Hupp and Osterkamp [31] worked on riparian vegetation and fluvial geomorphic process in U.S. During their studies they concluded that riparian vegetation and fluvial-geomorphic processes and landforms are intimately connected parts of the bottomland landscape. Conduct a study on riparian plant communities, and that was small in overall area, are among the most valuable natural areas in the Southwest [32]. Studied influences of the riparian zone vegetation characteristics on bank erosion and riparian buffers along with native indigenous vegetation or mixed indigenous and introduced flora [5]. Five different types of forest and riparian zones were selected. Studied the importance of low-flow and high-flow characteristics to restoration of riparian vegetation along rivers in arid south-western United States [33]. According to Fauling [34] riparian zone act as a link between aquatic and terrestrial ecosystems and play an important role in their ecological functions. Studied that these areas are adjacent to surface water bodies and are essential for ecological attributes such water quality and wildlife [35]. Nasir et al. works on threats to low riparian ecosystem of indus river [36]. This river is emanating from deterioration river flow regime coupled with associated anthropogenic activities. Ali et al. conducted their research on mapping and analysis of the riparian zone of the Indus River Basin, Pakistan [37]. They analyze quantitatively the health of riparian vegetation, study the wetland condition and channel sinuosity. Nandakumar et al. studied the phytosociological analysis of riparian tree species of Alakyam stream; Pariyaram, Kerala, India [38]. They studied that the vegetation of this stream consists of variety of herbs, shrubs, climbers and trees. Works on linkage b/w the restoration of rivers and riparian zones/wetlands in Europe [39]. They carry their research on floodplains in Europe are heavily impacted by human intervention. Studied the environmental diversity and spatial variations in riparian vegetation of Korang river in Islamabad, Pakistan [10]. As the recent research work is the first ever record of riparian vegetation in Lund Khwar District Mardan which might help for future intensive and extensive researches in the area.