Background: The microbes which evolved from soil, have pathogenic in nature and their control is important procedure in the agricultural practise since it is based on the certain fungal biocontrol agent. So, isolation and identification of fungi by contaminated soil is the key role to evaluate natural resource by detecting the biocontrol activity of isolated fungi against plant pathogen. Meanwhile, here determine effect of pesticides on fungal biocontrol agent.

Methods: Soil sample is collected with history of repeated use of chemical pesticide then serially diluted the soil sample in a sterile distilled water. The soil sample is poured on the PDA plate. These plates are incubated for 24°C for 2 to 4 days. The fungal species which was identified and their characterization done by microscopic analysis based on morphological character. Then isolated fungus was followed by the detection of biocontrol activity.

Result: The biocontrol agents have been effectively work and help to reduce the soil born plant pathogen. The effect has been found only by mixing the application of biocontrol agents. It associates with the use of cheap fungicide like carbendazim, mancozeb which is commonly runs by farmers in their farms by low dose.

India is well known for the agricultural practices so the plant pathogen is the major thread now a days and framers are suffered by the problem. There is some scientist, who worked on the biocontrol agents of fungi and bacteria, which is associated with six pesticides that is frequently used in the control of soil borne plant pathogens. As the compatibility of fungal (Trichoderma harzianum, Trichoderma virens and Pochonia chlamydosporia) and bacterial biocontrol agents (Bacillus subtilis and Pseudomonas fluorescens) was used against six pesticides viz., carbendazim, mancozeb, metalaxyl, captan, thiram, and nemacur which is regularly used farmers in agricultural practices in India for the control of soil borne plant pathogens [1].

Methomyl and carbofuran degrading-bacteria from agricultural soils is isolated and classified in Split Valley and Central Kenya by the scientists. Moreover, they use of pesticides remains actual serious in defensive the farmers’ speculation in seeds, compost and labour since they provide a sure cover from damage by pests. The use of pesticides, environmental pollution due to pesticides and their residues will have continued to be a challenge. In this study, bacterial strains capable of degrading methomyl (S-methyl-N-[(methylcarbamoyl) oxy]-thioacetimidate) and carbofuran (2, 3-dihydro-2, 2-dimethyl-7-benzofuranyl methylcarbamate) was isolated [3].

Some of the suitable review of isolation, identification, and resistance profile with growth kinetics of chlorpyrifos resistant bacteria is given by some of the scientist by isolating it from agricultural soil. Although there are benefits to the use of pesticides, there are also drawbacks, such as potential toxicity to humans and other animals and change in the eco balance due to residual effects. Three isolates viz., Bacillus stearothermophilus, Bacillus circulans and Bacillus macerans were found resistant to 50 mg/L, 55 mg/L and 60 mg/L of chlorpyrifos [4].

Trichoderma spp has key role as to control of soil born plant pathogens which is used commonly in large amounts in agriculture for disease control and as well as to increased quality of the agricultural product [6].

One hundred and forty-six isolates of Trichoderma spp. were isolated in the middle areas of Gansu Province, China, from potato plants of rhizosphere soils. It has been identified by the dual culture technique only. They also examined antagonism against Fusarium sambucinum, which is related to potato dry root disease. From these ten of the isolates had found to be obviously antagonistic for that pathogen which based on morphological appearances with molecular analysis. The isolates have been identified viz Trichoderma harzianum Rifai, Trichoderma longibrachiatum Rifai, Trichoderma atroviride Karsten and Trichoderma virens which is antagonism. Among these isolates, D-3-1 (T. longibrachiatum) showed the strongest inhibition of the growth of Fusarium sambucinum [7,8].

Trichoderma species have been isolated from the soil only which is the part of plant root ecosystems. The fungi are not only resourceful but also help to fix nitrogen to plant. It is also helpful in reducing some of the diseases of the plant. As of now, we have been known to Trichoderma viride is the fungus species which is present in the soil. Meanwhile, is worked as potent Bio insecticide, Bio fungicide, Bio bactericide [9-11].

Trichoderma is used to prepare biofertilizer, found in all agricultural soils including forest humus layer and orchard soils. These free-living filamentous fungi are extremely interactive with root, soil and foliar environments. They are also very useful to make biofertilizer and helpful to increase the quality of the soil. It has also been worked against another microorganism which is harmful to agricultural field. The Trichoderma is the type fungi, which is association to control a various variety of plant pathogen fungi. It has several applications. It works antagonistic effect on plant pathogens. Meanwhile, it also works on positive effect on plant growth and yield in some vegetable crops [12,13].

Soil sample collection: For the isolation of fungus or natural biocontrol resources, the soil sample were collected from the different area of farmer field where the history of repeated use of chemical pesticides.

1. The isolation done by the standard plating technique.

3. Then followed by the pouring on the potato dextrose agar plate.

5. After 2 days, the fungus colonies were observed on the PDA agar plate and composition shown in (Table 1).

The identification is done on the basis of the morphological characters. The other criteria are done by microscopic analysis, using taxonomic guides and standard procedure.

5. Make up the volume with distilled water 20 ml.

The characterization was done by the staining technique:

2. 1st day, take distilled water and dissolve the cotton blue in it, keep it for overnight to remove insoluble water.

5. Filter the cotton blue and distilled water solution in to phenol/glycerol/lactic acid solution mix and store at 37°C.

Identification of the of the biocontrol agents based on morphological character by microscopic method:

1. Slide cleaning is most important here.

5. Observe under the microscope.

The biocontrol activity was detected by the dual culture technique with various phytopathogen. In which the interaction/overlap zone between the antagonist fungus and plant pathogen is measured. In the petri dish PDA medium placed with 5 mm diameter disk with 5-day-old plant pathogen active mycelium and on the opposite site.

Isolation of Trichoderma spp. from the soil samples

Isolates of Trichoderma spp. were collected from Agricultural soils. After dilution technique some diluted sample is taken on the PDA at 28°C for 2 days, developed and became dark green at the center, shown in (Table 2). The maximum growth of T. harzianum was inhibited at a concentration of 500, 755, μg/ml of carbendazim, mancozeb, respectively. The corresponding value for T. virens were 405, 625 μg/ml of carbendazim, mancozeb, respectively. The fungicides at concentrations of 60 μg carbendazim/ml, 225 μg mancozeb/ml, for T. virens the safe tolerance limit was 40 μg carbendazim/ml, 177 μg mancozeb/ml showed less tolerance to the pesticides tested (Table 4). Biocontrol bacteria were found more tolerant to fungicides than fungi, shown in Figure 2 and Graph 1. Figure 2. Biocontrol activity before and after growth. 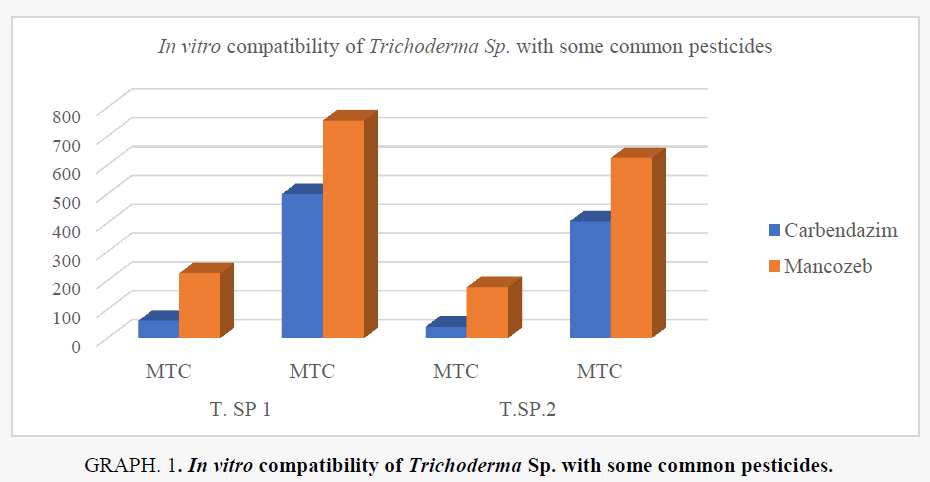 Graph 1. In vitro compatibility of Trichoderma Sp. with some common pesticides. Figure 8. Effect of pesticides on Trichoderma.

Here, the current study clearly established that, soil tolerated plant pathogens can be successfully managed by Trichoderma can parasitize fungal pathogens and yield antibiotics. Meanwhile, the fungus has many good application and has beneficial effects on plant growth, yield, nutrient uptake, increase fertilizer using efficiency, increase rate of seed germination as well increase the systemic resistance for plant diseases [14,15]. Cole and Zvenyika proposed that F. solani infection of tobacco plants could be controlled by incorporating T. harzianum into disease management procedures [16]. A study carried by Yedidia reported that T. harzianum inoculation improved the uptake of nutrients by the plant at a very early growth stage [17].

There is keeping in consideration, the relation between soil physicochemical belongings and richness of original microorganisms. The moisture content in soil acts as solvent and is essential for microbial functioning. A certain least level of natural matter and humidity content is essential to ensure the attendance of an active microbial population in the soil. In the present study, it is important to increase the agricultural yield pesticides plays a key role, but only less than 1% of the pesticides are enough to kill the pests, remaining pesticides enter the ground and surface water and causes environmental pollution [18]. Thus, some of the pesticides were banned and some are modified without damaging to the environment. However, organophosphates are creating a lot of health problems [19]. Various kinds of bacteria present in soil and water can degrade many insecticides. The present investigation involves the isolation of pollutants tolerant and resistant bacteria from the respective contaminated sites. As the microorganisms like bacteria plays a key role in bioremediation, experiment was carried out to identify the bacterial strain from organophosphate contaminated soil capable of degrading organophosphate. First, for the study soil samples were collected and it was serially diluted. Nutrient agar medium and PDA broth was prepared. The diluted soil samples are inoculated on to the PDA Petridis. An isolated colony was picked from the Petridis and later the same colony is inoculated onto the broth. From this pure, isolated and single colony were obtained after 4 to 6 times of subculture.

Here the physiochemical properties of soil keep in consideration for the study, used for isolation of microbial species. Color soil samples brown to black: in between pH (7.82-8.65). The temperature of the soil was high (30.2°C-33.2°C) with great variation in percent moisture content (0.35-0.95), organic carbon (0.2568-0.4125) and percent organic nitrogen (0.2213-0.3555). It come to know that Soil properties like organic matter, pH and moisture content etc., affects the density and diversity of microbes in the soil. Therefore, it is needed to study the relation between soil physicochemical belongings and plenty of indigenous microorganisms. The moisture content in soil acts as solvent and is essential for microbial functioning. A certain minimum level of organic matter and moisture content is essential to ensure the presence of an active microbial population in the soil. Here, the important physicochemical possessions of the soils, used for the valuation of natural fungal concentration, have been determined.

This study concludes is fungal strains were isolated from pesticide contaminated agricultural soil of different areas of the farm. These species successfully identified by the lactophenol cotton blue based stain and as well as characterized by the microscopic analysis with their morphology. Some of the fungal species that can grow efficiently, that’s means these original fungi have the capacity to adapt to xenobiotic compounds as novel growth and energy substrate. Therefore, these fungi have a potential to degrade xenobiotic compounds which will be tested in further study for degradation of commonly used pesticides.

Here, in this present study, it was clearly confirmed that, soil borne plant pathogens can be effectively accomplished by combined application of biocontrol agents/natural resources with inexpensive fungicide like carbendazim, mancozeb, and frequently used by Indian farmer at low doses. Also, pesticide contamination in soil will not affect the biocontrol agent effectiveness and hence can be easily applied in conjugation with the pesticides for the control of soil borne phytopathogen.