The threat of oil pollution increases with the development of large-scale off-shore petroleum industrial activities. Recently, reducing waste materials through reuse has contributed to sustainable manufacturing in many industries. With development of large-scale poultry farming industries, the disposal of large amounts of waste chicken feathers has become a huge problem. Thus, sustainable methods for valorisation of this waste are needed. This paper examines beneficiation of waste chicken feathers via conversion into sorbents for clean-up of oil spills in water bodies to replace conventionally used synthetic adsorbents that are costly. Chicken feathers have a very high capacity for adsorption of liquid oils (up to 16.21 g of oil/g of chicken feather) at fast uptake time (10 min). The removal efficiency of oils in spills increases with increment in contact time with the sorbent. Untreated waste chicken feathers exhibited slow sorption rate for oil due to the presence of grease and other impurities on the surface of feathers. More than 85% of the oil adsorbed by chicken feathers can be recovered. Thus, waste chicken feathers show very attractive and promising adsorption/absorption properties for oil spill clean-up applications to replace polymer-based adsorbents due to their high oil absorption capacities. Both untreated and treated chicken feathers show promising potential for use as oil absorbents.

Oil pollution has become one of the most serious threats to the aquatic ecosystem during the last 30 years due to the development of large-scale off-shore petroleum industry, increase in runoff of oil, increase in accidental spills, discharges of fuel from land-based sources, oil drilling accidents and increase in marine oil transportation [1-4]. Major sources of waste oil include petroleum refining, petrochemical plants, vehicle repair garages, metal and steel manufacturing industries, vegetable and animal oils in household’s wastes and abbatoir wastes [5-7]. Large quantities of oils discharged into the ecosystem can cause serious environmental problems, including adverse effects on water quality and aquatic biota, clogging of sewage treatment plants, increased chemical oxygen demand due to the large amount of bacteria necessary to decompose the oil, as well as increased biochemical oxygen demand [1-5,8-10]. Treatment of oil spills in affected waters results in improved water quality, oil recovery, protection of aquatic biota and environmental protection.

Several techniques are used for removal of oily contaminants from contaminated waters; they include in-situ burning, solidification of the oils, reverse osmosis, filtration, micro-filtration, ultra-filtration, air flotation, bioremediation, gravity separation, electrocoagulation, chemical coagulation, electro-flotation and physical techniques such as booms and skimmers [1,3,11-14]. The methods can be categorized into three major groups, viz., chemical, biological and physical processes. Chemical methods are effective in oil removal from water, but they are costly and can adversely affect zooplankton, a primary food source in the marine food chain. The treated oil cannot be recovered and is thus hazardous to humans and animals [1,11]. Bioremediation is effective in oil spill removal, but it is time-consuming and its effectiveness is affected by oxygen level, temperature and organic moieties in the oil [13,15].

Treatment of chicken feathers: Experiments were conducted with treated and untreated feathers. Freshly plucked wet untreated chicken feathers were purified by washing with a 0.5 g/L aqueous solutions of SDS to remove the grease, other wastes and kill potential harmful pathogens. Untreated waste chicken feathers (10 g) feather samples were placed in a beaker to which was added the SDS solution at a liquid to solid ratio of 40:1. The sample was agitated at 500 rpm using a magnetic stirrer with the beaker on a hot plate maintained at 50°C for 30 min. The treated feathers were further purified by rinsing in distilled water for 10 minutes and then laid on aluminium foil and dried to a constant mass at 100°C in an air-forced dryer. Thereafter the sample was placed in plastic bag that was sealed and then stored in a controlled laboratory environment (20°C, 65% relative humidity). The different portions have different characteristics and properties as previously reported. Hence the different portions were separated (manually) for independent testing. Dried treated and untreated feathers were pulverized to 350 μm size using a heavy-duty milling machine before use to increase surface areas of the feathers.

Characterization of chicken feather fractions: Morphological, chemical and physical characteristics of feathers and fractions thereof have been described in a number of reports [30-32].

Oil adsorption capacity of chicken feather fractions: 30 g sodium chloride, 0.8 g potassium chloride, 6.6 g magnesium sulphate, 0.5 g of sodium hydrogen carbonate and 1.3 g calcium chloride were dissolved in 1000 ml of water to simulate artificial seawater. An oil spill was simulated by mixing 150 ml oil with 300 ml of the artificial seawater. 5 g each of untreated whole, untreated barb, untreated rachis, untreated whole powder (350 μm), treated whole, treated rachis, treated barb and whole chicken feather powder (350 μm) were dispersed in a beaker containing 300 ml simulated water and 150 ml oil using nylon mesh bag. The oil absorption experiments were carried out at 25 ± 2°C for 5, 10, 30 and 60 min. Then bags were then picked up with forceps and allowed to drain for 2 min until oil began to slowly stop dripping from the bags. The weight of the bags was recorded (Final weight) and the amount of oil absorbed per unit mass was calculated based on equation 1:

Oil desorption capacity of chicken feather fractions: After adsorption, the chicken feather fractions were weighed (Initial weight) and then pressed (William Apparatus Co., Watertown, NY) for five minutes at 25 ± 2°C at YY newtons to squeeze out adsorbed oils. After pressing, the weight was noted (Final weight) and the amount of oil recovered per unit mass was calculated based on equation 2:

Morphological structures of chicken feather fractions: A closer look at a chicken feather reveals that it is comprised of three distinct units: (FIG. 1) the rachis, the central shaft of the feather that runs the entire length of the feather to which is attached the secondary branching structures; the barbs and tertiary smaller structures; and the barbules (FIG. 1b and c respectively). These morphological structures of chicken feathers were an indication of large surface areas. The rachis is composed of many individual fibres (FIG. 1d). As can be seen in FIG. 1e, the feather barbs exhibit honeycomb shaped hollow cells in the cross-section direction. The voids inside chicken feathers may be very accessible to fluids or air. The presence of hollow honeycomb structures provides high resistance to compressibility and also imparts light-weightiness to barbs and rachis. The honeycomb structure in the cross-sectional view of the chicken feathers, as shown in FIG. 1e, confirms the existence of extensive air pockets in the feathers. The images in FIG. 1e confirm that the microstructure of feathers is nearly round; the medulla in coarse fibres are concentric and irregular in size. Any adsorbent material intended to remove oil from water surface should ideally float since oil tends to float on water. The presence of extensive air pockets (honeycomb structure) in the structure of waste chicken feathers imply that feathers can float on top of the water and could thus act as superabsorbent materials for oils present on water surface. The presence of hooks, hooklets, rough surface appearance, entangled pores and knots in the chicken feather structure enhance the oil retention properties [30]. 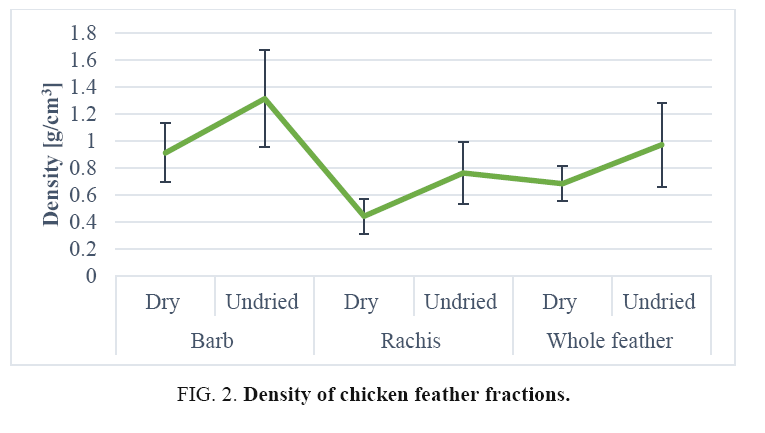 Nitrogen adsorption/desorption isotherms at 77 K of the barb and rachis of the chicken feather samples are shown in FIG. 5. Both fractions exhibited the type-III isotherms and explain the formation of multilayers. FIG. 5 shows considerable differences between the adsorption/desorption isotherms of barb and rachis of the chicken feather: the uptake amount at low pressure by rachis were much higher than barb this is the indication for the presence of more mesopores.

The uptake of nitrogen at very low pressures is due to mesopore and micropores filling from the enhanced adsorbent-adsorbate interactions in the mesopores and is distinct from adsorption in macropores because adsorption in mesopores material is due to multilayer adsorption and capillary condensation. 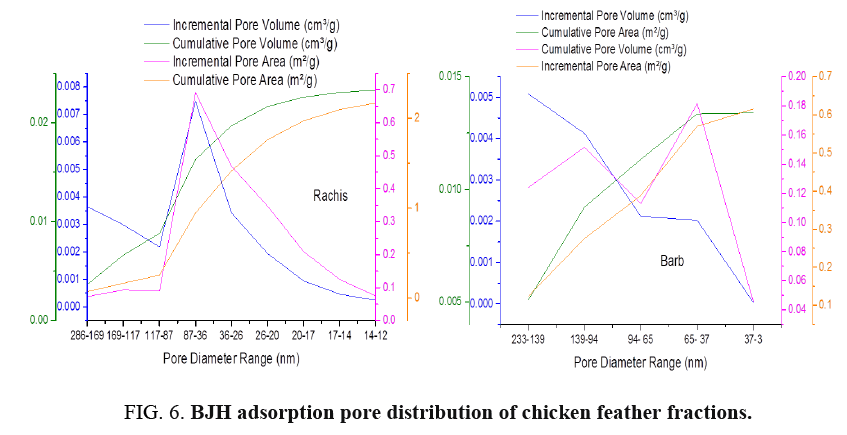 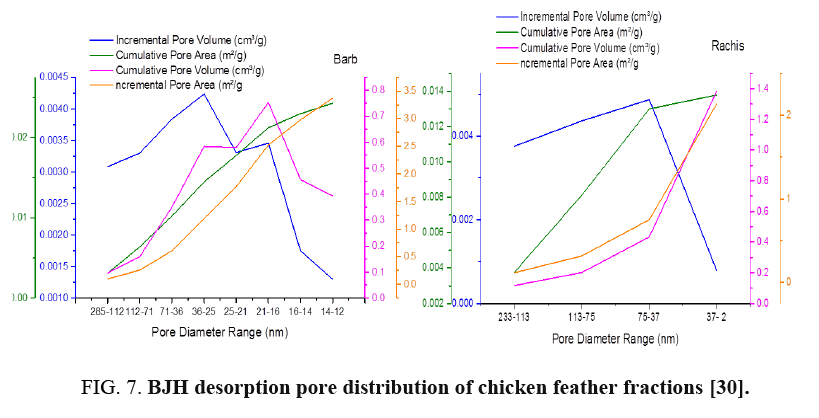 FIG. 8. (a) Simulated oil spill; (b) chicken feather fraction floating on top of the oil layer; (c) chicken feathers saturated with adsorbed oil after 30 minute contact time; and (d) material remaining after removal of the feathers. 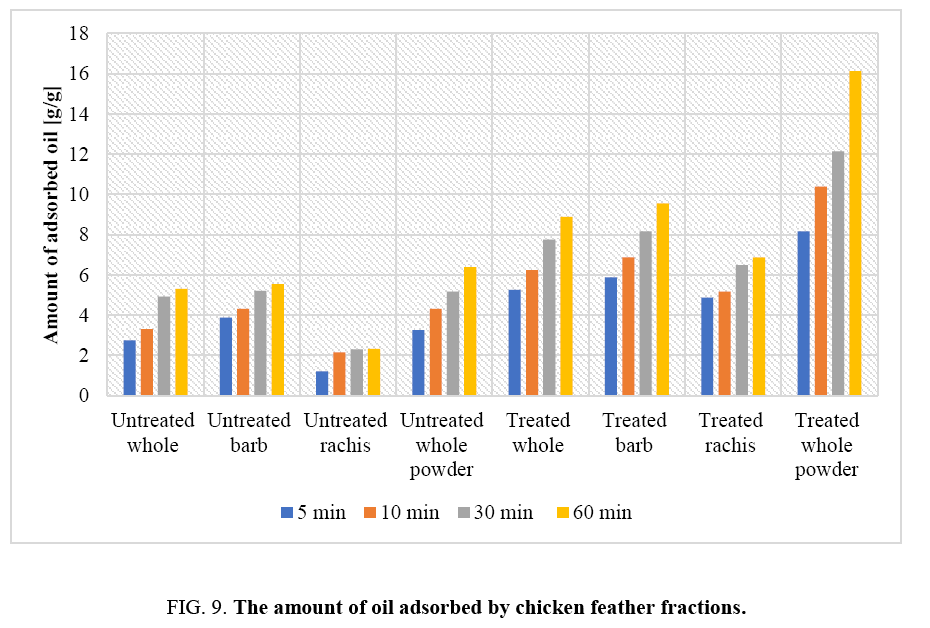 FIG. 9. The amount of oil adsorbed by chicken feather fractions.

The oil absorption capacity of chicken feather fractions as a function of time is shown in FIG. 9. It is clear that as the adsorption time increases the amount of oil adsorbed by chicken feathers increases. There is an increase in oil absorption of about 35% when the contact time is increased from 5 min to 30 min. It can be seen in FIG. 9 that the rate of oil uptake in the adsorption process was rapid initially in the first 10 min and the weight of adsorbed liquid oil had reaching equilibrium in about 30 min, indicating that the chicken feather fractions were saturated. The observed initial rapid sorption may be due to the movement of oil molecules from the higher concentration regions to the surface of the adsorbent. The data indicate that 30 minute contact time would be ideal for oil spill cleanups. The data also show that whole chicken feathers were more effective in oil removal than individual feather fractions. Thus, there is no need to fractionate the feathers. 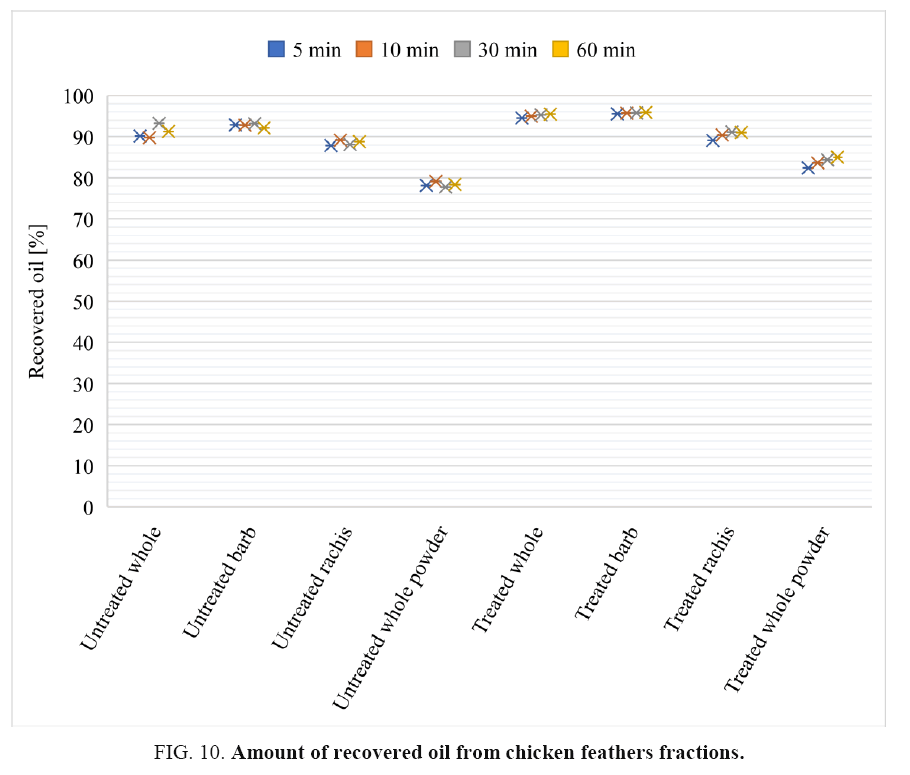 Both treated and untreated waste chicken feather fractions were evaluated for their potential beneficiation as oil spill sorbents from contaminated waters. Treated chicken feather fractions absorb oil up to about 16 times their weights whereas untreated waste chicken feathers only absorbed oil up to about 6 times of its original weight due to high grease content and other waste contaminants on its surfaces that impeded oil adsorption. Characteristics of feathers such as oleophilicity, hollow structure, high keratin content, pore size and volume distribution, indicate that chicken feathers are ideal oil spill sorbents.

The authors are highly grateful for the financial and technical support received from: The Institute of Technology for Textile and Fashion Design/EiTEX at Bahir Dar University, Ethiopia; the Thermodynamics Research Unit at the Discipline of Chemical Engineering, University of KwaZulu-Natal; the Biorefinery Industry Development Facility, Council for Scientific and Industrial Research (CSIR) and the Department of Science and Technology, Waste Research Development and Innovation Roadmap.